We students of Wyoming geology are quite familiar with the Laramide Orogeny, the deformation of the Earth’s crust that produced the Rocky Mountains.  We’re surrounded by Laramide structures, and those of us older than a certain age drew many cross-sections through these mountain ranges in learning how they came to be.

Laramide uplifts are fairly similar in structure.  Often there’s a steep reverse fault on one side, where the range was tilted up.  On the other, sedimentary rocks form flatirons, hogbacks and strike valleys.  These sedimentary strata are gone from the broad crest of the range, exposing ancient igneous and metamorphic rocks from the basement of the continent.
But what happened to the old sedimentary cover? ... where are the missing rocks?  Though we often think of mountains as immutable, they are hardly permanent.  Erosion sets in as soon as uplift starts, and a range is worn down as it’s created.  The sedimentary rocks that covered the mountain ranges of the Rockies were deformed, fractured, weathered and carried away by water and wind.  In the case of our local uplift, the Laramie Mountains, they ended up where many of our plastic grocery bags go -- in western Nebraska.

I was in western Nebraska myself recently, and friends suggested I check out Toadstool Geological Park.  That’s the answer to the “where” part of my recent geo-challenge.  As to “why” -- I went to see the curious erosional features, fossils and preserved trackways of now-extinct mammals for which the park is known.
When I arrived I discovered an even more compelling reason to visit -- rocks of the White River Group are particularly well-exposed in the park.  In fact it’s considered the “type section” for the group, the standard against which “all other similar-aged deposits in North America are compared” (from park brochure).  White River rocks are composed of sand, silt and clay, but not just any sand, silt and clay.  This is material eroded off the Rocky Mountains to the west, the remains of those missing sedimentary rocks!

The Laramide Orogeny ended around 45 million years ago, but erosion of the mountains continued.  The resulting debris accumulated in adjacent basins to depths of over a thousand feet in places.  By Oligocene time, sediments of the White River Group formed a plain sloping down from mountain ranges in eastern Wyoming into Nebraska.  The mountains were largely buried in their own debris, with just a bit of the crest exposed.
It appears there were three of these episodes of deposition; White River sediments represent the earliest.  After each episode, deposition gave way to erosion.  Why?  Nobody's sure.  Perhaps there was regional uplift or climate change or both.  In any case, rivers were rejuvenated and they set to work carrying off material deposited just a few million years earlier, including White River sediments.

There's little left of the White River Group in eastern Wyoming and in Nebraska it’s largely covered by younger sediments.  That’s why I was so excited to find it at Toadstool Park!
The great geo-mapper Nelson Horatio Darton arrived here for fieldwork in 1897.  He found a picnic table, a sign that said “Toadstool Park” and much of interest, just as I did 106 years later.  In his project report, he described and mapped two formations (layers) within the White River Group -- the older Chadron (Eocene) and the younger Brulé (Oligocene). 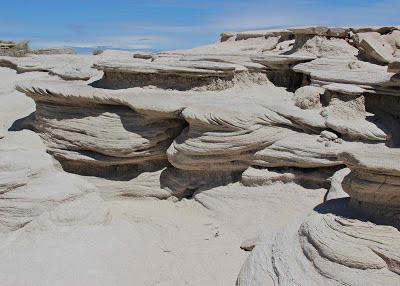 The badlands at Toadstool Geological Park are developed on the Brulé Formation (Orella member).  These sediments were laid down by slow meandering rivers in a hot humid environment -- quite different from today!  Now they are rock, alternating layers of sandstone and clay.  The sandstones were once sandbars and sandy river beds, the clays were adjacent floodplains and wetlands.  The contrasting hardness of the two rock types gives the area its charm -- sculptures produced through differential weathering.
I was intrigued by the fossilized trackways.  They look very much like modern-day game or stock trails, especially after a heavy rain or near streams.  I could easily imagine herds of large mammals walking along the old rivers.  The slab below is part of the most extensive Oligocene trackway known in North America, on the order of 3/4 of a mile long.
It was a neat experience to walk on the rock slabs and think about ancient titanotheres (rhino-like beasts) and giant pigs passing by 30 million years ago.  Then it occurred to me ... the wet sandy mud in which they left their prints may well have come from the Laramie Mountains.  They in their time, and we in ours, were walking on the remains of the old sedimentary cover of some Laramide structure -- the missing rocks.

From Hot Springs, South Dakota take Highway 71 about 37 miles south to Toadstool Road.  Follow it 11 miles to Forest Service Road #902, then go 1.4 miles to the Toadstool Campground.  This route was clearly signed when I took it.  OR ... From Crawford, Nebraska go to the intersection of Highways 20 and 2, then north on Highway 2 to Toadstool Road (4.2 miles).  Follow Toadstool Road 11.4 miles to FS Road #902 and continue as above.  Some of the unpaved roads get quite slick when wet, especially those coming in from the north.  There is a small campground with picnic tables, sun shelters and outhouses (no water), and several hiking trails.

Roadside Geology of Nebraska has sections devoted to Toadstool Park and the nearby Hudson-Meng Bison Kill site.  I like this book because it has in-depth coverage of destinations as well as the usual roadside info.

You can read Darton’s description and discussion of the White River Group in his Preliminary report on the geology and water resources of Nebraska west of the one hundred and third meridian (1903).

Footprints in Stone: Trackways at Toadstool Park is a nice overview of the park’s geology and paleontology; by Steven Veatch (2000).

If you go to Toadstool Park, you might want to visit the University of Nebraska's Trailside Museum of Natural History at nearby Fort Robinson State Park.  The focus is Cenozoic mammal fossils of the region.