I guess it was a little odd … to go to the White Mountains and not visit the famous ancient bristlecone pines.  But I was looking for singleleaf pinyons.  A few weeks earlier I had hung out with two-needle pinyon pines on the Colorado Plateau.  So I wanted to get to know this other pinyon.

There are two common pinyon pines in the western US:  the two-needle or Colorado pinyon (Pinus edulis) on the Colorado Plateau and Rocky Mountain foothills; and the singleleaf pinyon (P. monophylla) in the Great Basin and southern California.
If you look east across the Great Basin from the White Mountains, you'll see range after range covered in singleleaf pinyon - Utah juniper woodland. 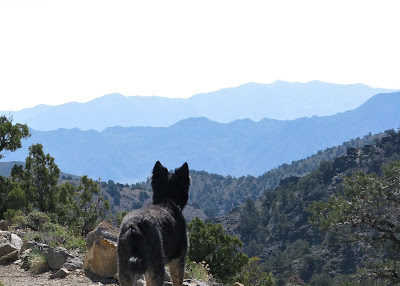 This is an arid-lands kind of vegetation.  It grows in some of the driest pine habitat in the world (Waring 2011).  Yet pinyon-juniper woodland is common at higher elevations in the White Mountains – at 8, 9, 10,000+ feet where “normally” we'd find montane forest.  But the Whites are dry.  They’re only about 25 miles east of the mighty Sierra Nevada, which casts a giant rain shadow.

Westerly winds carry considerable moisture from the Pacific Ocean across California, and when the air bumps up against mountain ranges, it rises and cools and moisture condenses out as rain and snow.  Then when the dried-out air descends on the east side of the mountains, it warms and expands and can hold more moisture.  So there’s a rain shadow, especially behind the great Sierra Nevada (more information here and here).

The area around Grand View Campground is quite dry, even though it’s at about 9000 feet elevation.  The pinyons generally were taller and grew more densely than the two-needles on the Colorado Plateau.  Is life a little easier? … the cooler climate a bit more hospitable? 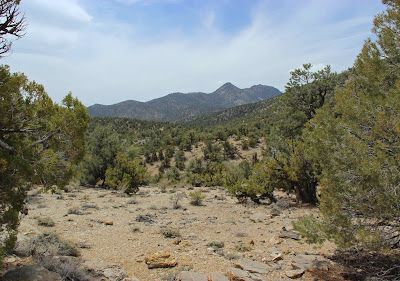 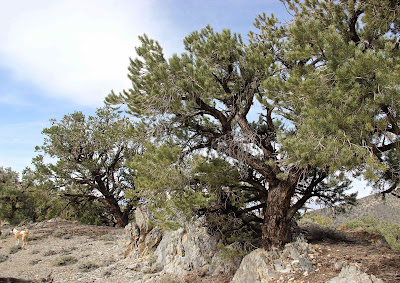 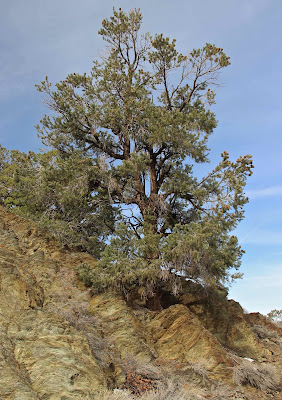 It helps to start life beneath a nurse plant, in this case sagebrush (Artemesia tridentata). 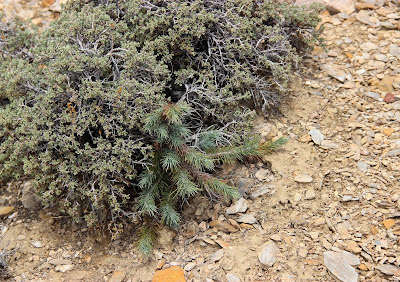 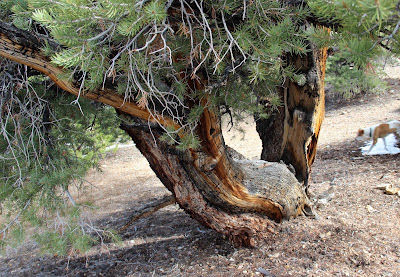 The dead may stand for years in this high dry country. 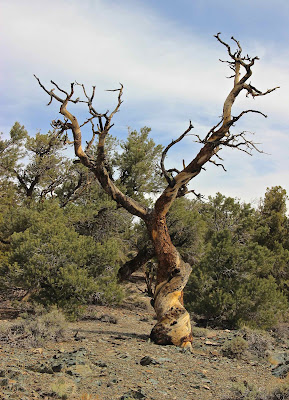 The singleleaf pinyons weren’t as pitchy as the hésho tsítonnê (two-needle pinyons) I saw in Utah.  I didn’t find any gum balls on the ground.  But there was plenty of pitch around fresh wounds. 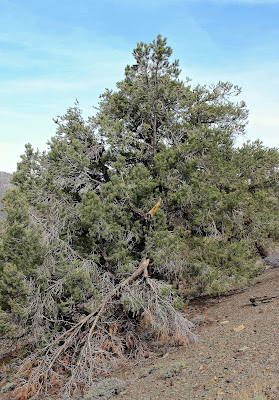 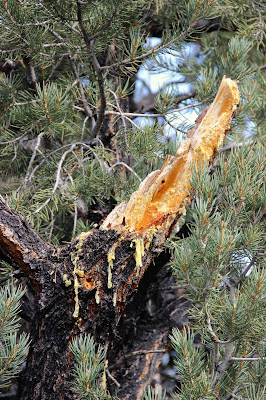 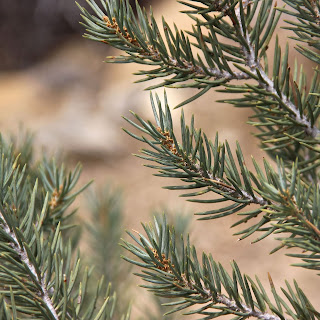 It's obvious why these are singleleaf pinyons.  Most pines have 2-5 needles per fascicle, but the singleleaf has only one (a fascicle is a bundle of needle(s) with a sheath at the base). Singleleaf needles are stouter than the two-needle's, and have white lines on all sides – rows of stomata (pores for gas exchange).  Click on the next image to see. 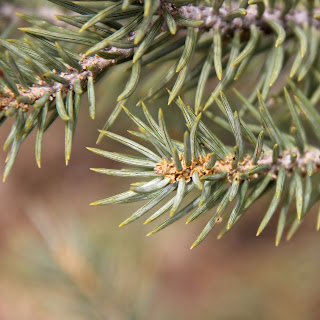 Cones of the singleleaf pinyon are larger than those of the two-needle.  They seemed abundant in the White Mountains ... maybe recent years have been good ones.  I've read that female cones (the ones with seeds) develop in the upper part of the tree.  That is what I saw in larger trees.  Here's a singleleaf pinyon wearing a beautiful crown of cones. 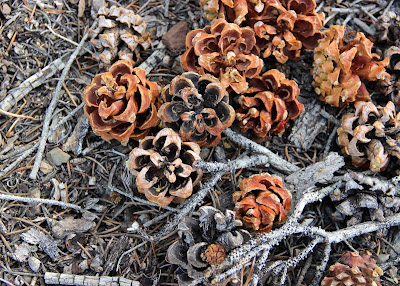 Each cone scale bears a pair of seeds.  When the seeds fall out they leave cone eyes, called he-push in Panamint (Lanner 1981). 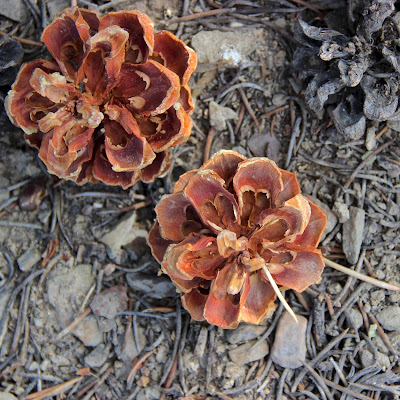 Pale-colored seeds like the next ones are almost always empty.  Pinyon jays know better than to bother with them.  They collect only the rich nutritious dark ones (Lanner 1981). 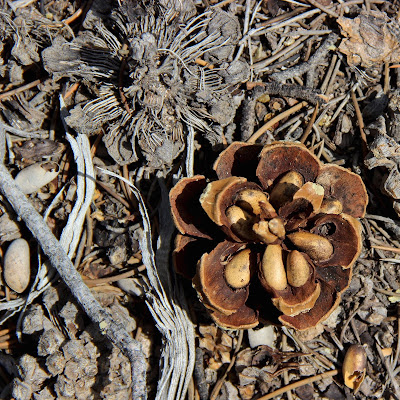 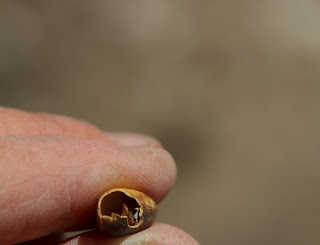 Next I drove east across Nevada and the Great Basin.  Wherever I stopped to check pinyon pines, I found singleleafs.  Near Ely, I camped in dense second-growth pinyon-juniper woodland.  The old charcoal ovens at Ward attested to the youth of the trees.  About 150 years ago, they were all cut down to make charcoal for smelters (mining). 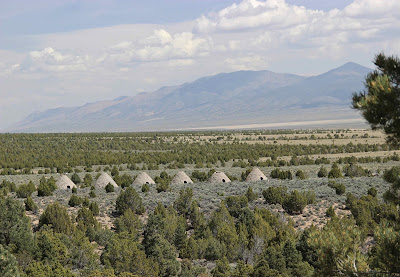 I continued east through Utah to the Colorado Plateau, and was back in the land of the two-needle pinyon.  I made a great find at Colorado National Monument.  Near the picnic area, the two-needles were loaded with male cones … I’d not seen them before.  True to what I had read, they were mostly on lower branches.  And the junipers were loaded with berries too, maybe because of runoff from the parking lot. 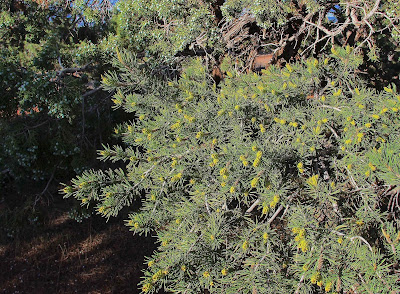 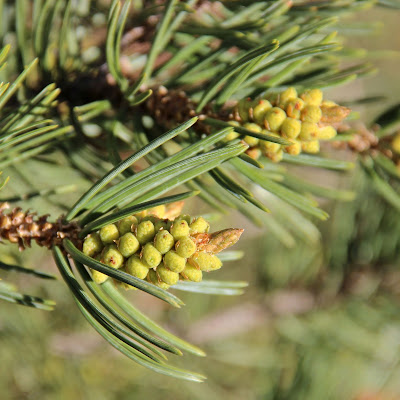 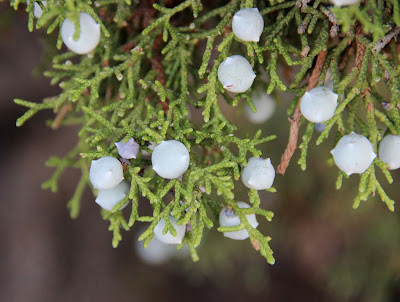 There’s much that is awe-inspiring at Colorado National Monument.  I was especially impressed by the pinyons and junipers that have managed to create woodlands of sorts on the great monocline of the Uncompahgre Plateau.  These are small but tough trees! 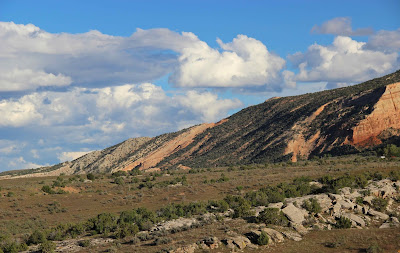 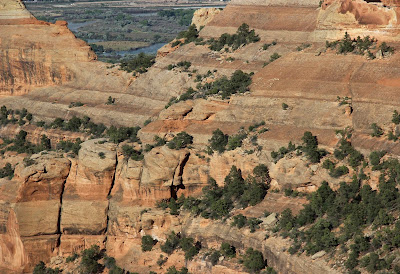 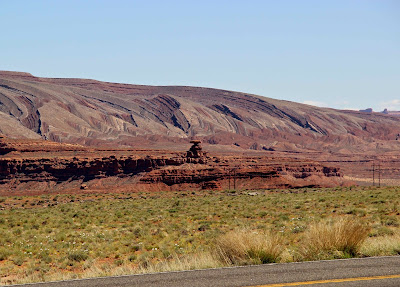 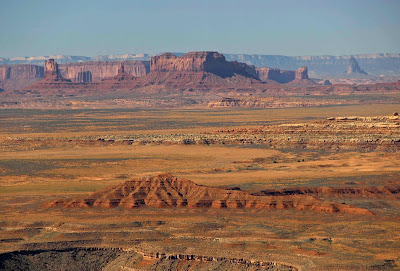 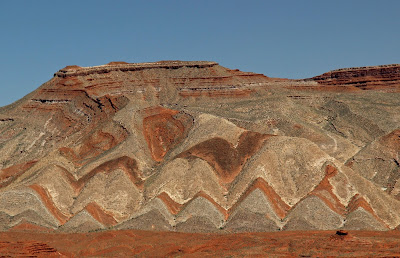 Trumpets in the Desert 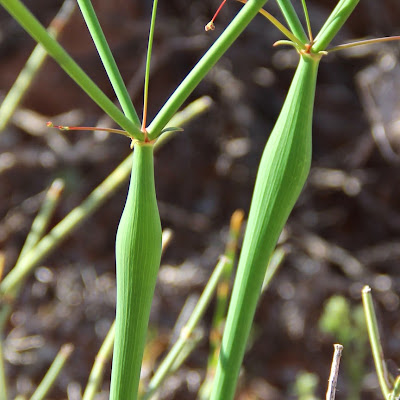 There are many many wild buckwheats – on the order of 450 species, subspecies and varieties. They’re native to North America and reach their greatest diversity here in the American West (e.g. 200+ in California alone).  I should be proud, but instead I avoid them because they’re notoriously hard to tell apart.  Even the acknowledged expert, JL Reveal, agrees with me:

“Species of Eriogonum [wild buckwheats] have long been regarded as among the most difficult in North America to distinguish” (source).

But there’s one wild buckwheat that’s among the easiest plants to distinguish, even though its flowers look pretty much like those of other wild buckwheats …
… and the leaves are hardly distinctive.
Yet even at a distance we can recognize it …
… by its stems! 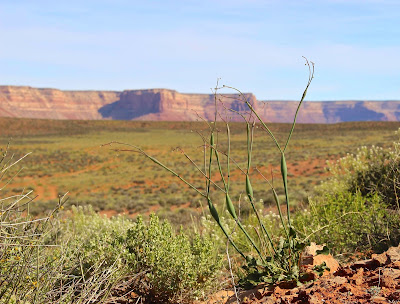 It’s the … FANFARE!!! … desert trumpet, Eriogonum inflatum.  The photogenic inflated stems and branches give it away. 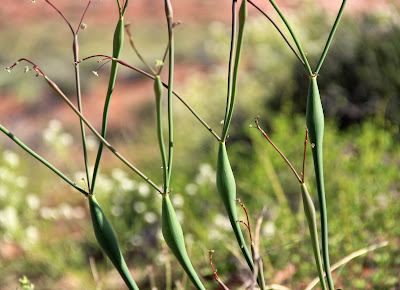 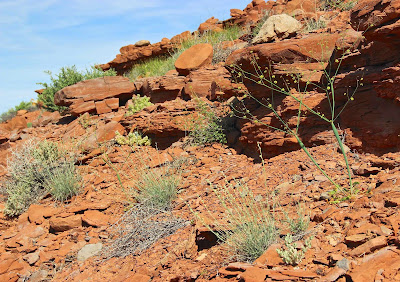 Once upon a time someone found insect eggs in stems of desert trumpet, and speculated that the hollow swellings were abnormal growth caused by insects.  Speculation became knowledge, which persists in spite of efforts to get rid of it (read more here, here and here). Insects sometimes lay eggs in the inflations, but plants grow them even where there are no insects – in labs for example.

Inflated stems are a boon to photosynthesis.  They store carbon dioxide (unless insects drill holes to ventilate their nurseries), and provide up to 75% of a plant’s photosynthetic surface.  Even better, stems and branches remain green and photosynthetically active into summer, after the leaves have wilted (Waring 2011).

Some desert trumpet plants do not have inflated stems.  “… this feature is partly a function of available moisture: the drier the conditions, the less pronounced the inflation.  Stems produced in the summer tend to be inflated less frequently than those produced in the spring” (source).   Non-inflated stems were the basis for an old variety that’s no longer recognized.  Too bad, it had a neat name:  Eriogonum inflatum var. deflatum.

By fall the stems have dried and turned brown, but they usually stay on the plant for at least another year.  You can take a dried stem and slice off half of the inflated part lengthwise to make a pipe, as some Indians did.  This is why desert trumpet is also known as Indian pipeweed.  Another name is bottle stopper.