Yesterday afternoon, I went to LaBonte Park to bid adieu to the chokecherry tree I followed this year. But I forgot my camera. But I had my phone. But it was a brand new (to me) smartphone (AT&T didn't want me and my little flip phone anymore). But by tapping here and there on various screens viewed through dark glasses in bright sunlight, I got what I wanted.
Last night, I learned that with just a few taps, this wondrous device would send photos to my laptop—very cool! But for the next half hour I tapped, searched, read, tapped some more and wondered, while my laptop remained oblivious to the phone "Waiting" just six inches away.
Then I heard the boing of digital media arriving. Turns out neither device was to blame—our WiFi had disconnected. But it returned, so off we go to LaBonte Park.
It was a beautiful day—cold, sunny, calm. The pond is frozen and snow-covered. But it's still too early in the season to test it, even along the margins. 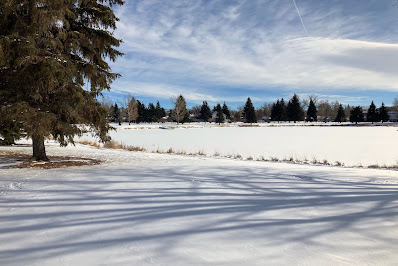 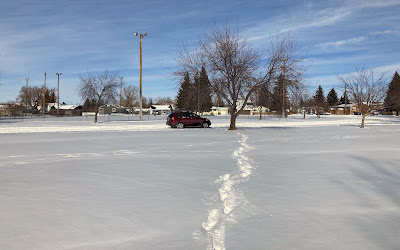 Sky and canopy, with the last leaves tightly huddled. 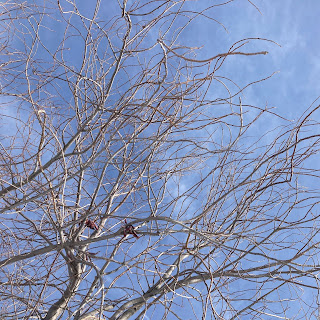 Characteristic curving stems and branches. Note the American crow eating something it found on the street (black spot left of tree). 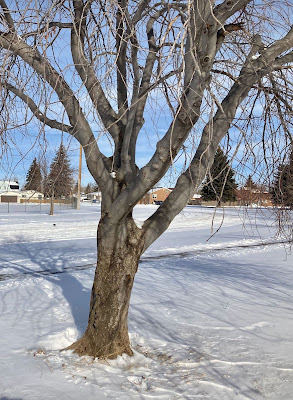 The requisite selfie: me and my tree. 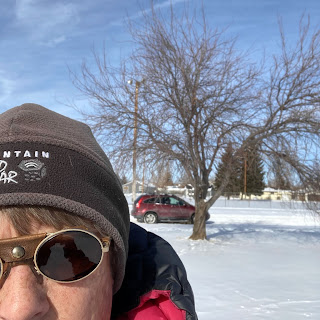 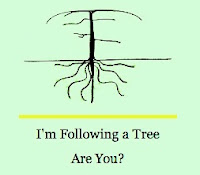 This is my final report for 2020, posted at the monthly gathering of tree-followers kindly hosted by The Squirrelbasket. Now it's time to select a tree for next year :) Want to join in the fun? Information here.
Posted by Hollis at 9:28 AM 6 comments: