The Laramie River is a mighty river now -- not just a wimpy little plains stream.  It’s officially in moderate flood, and will rise even higher soon.  The days are warm and the snow in the mountains is melting fast. 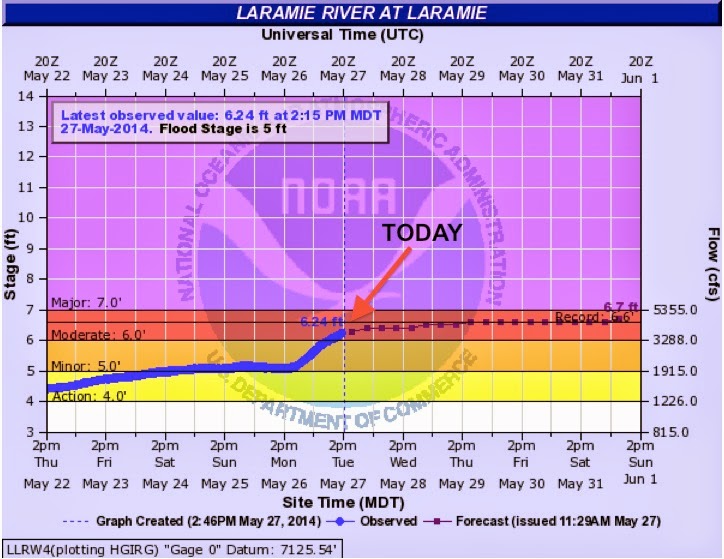 This was Rich’s bench a month ago ... 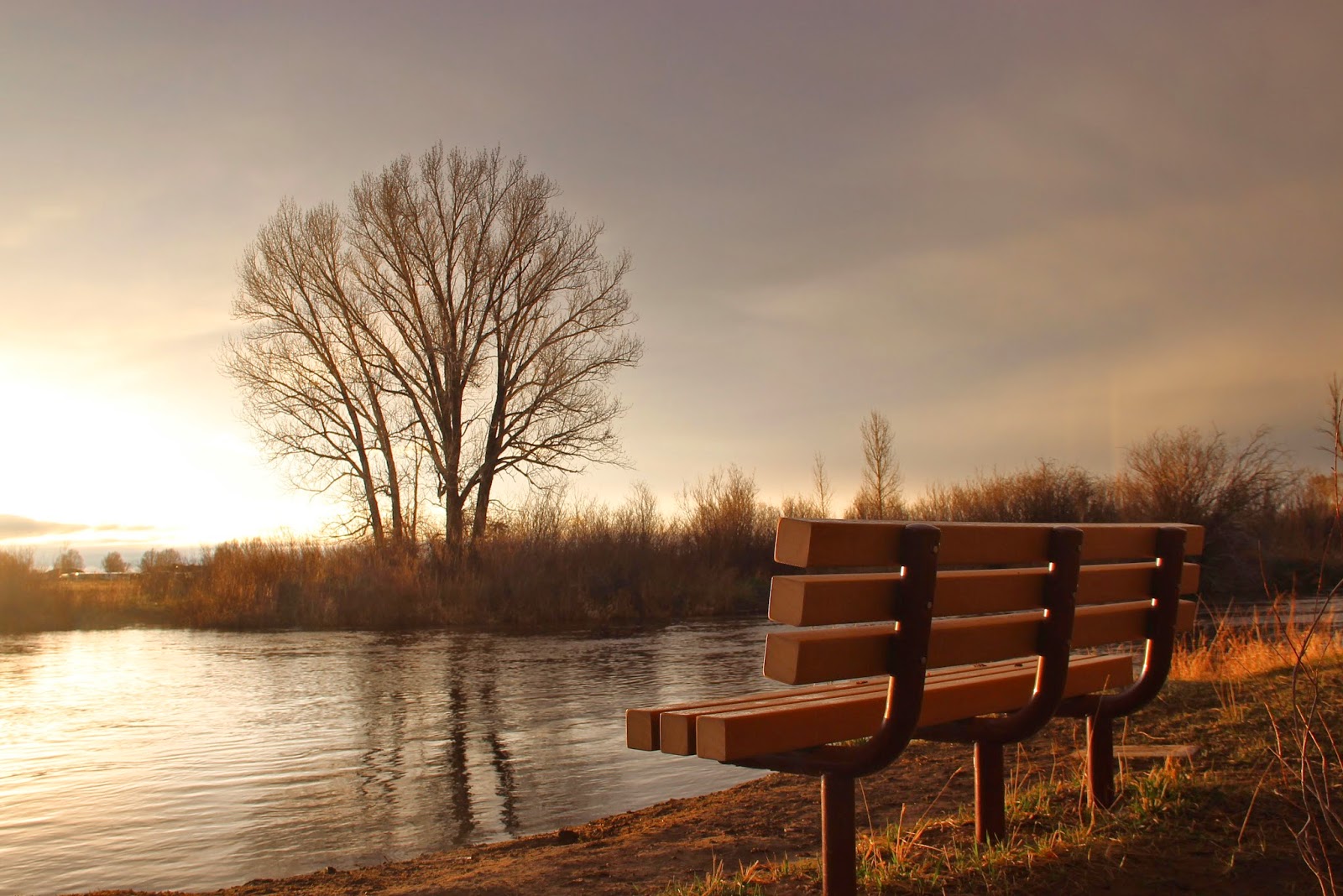 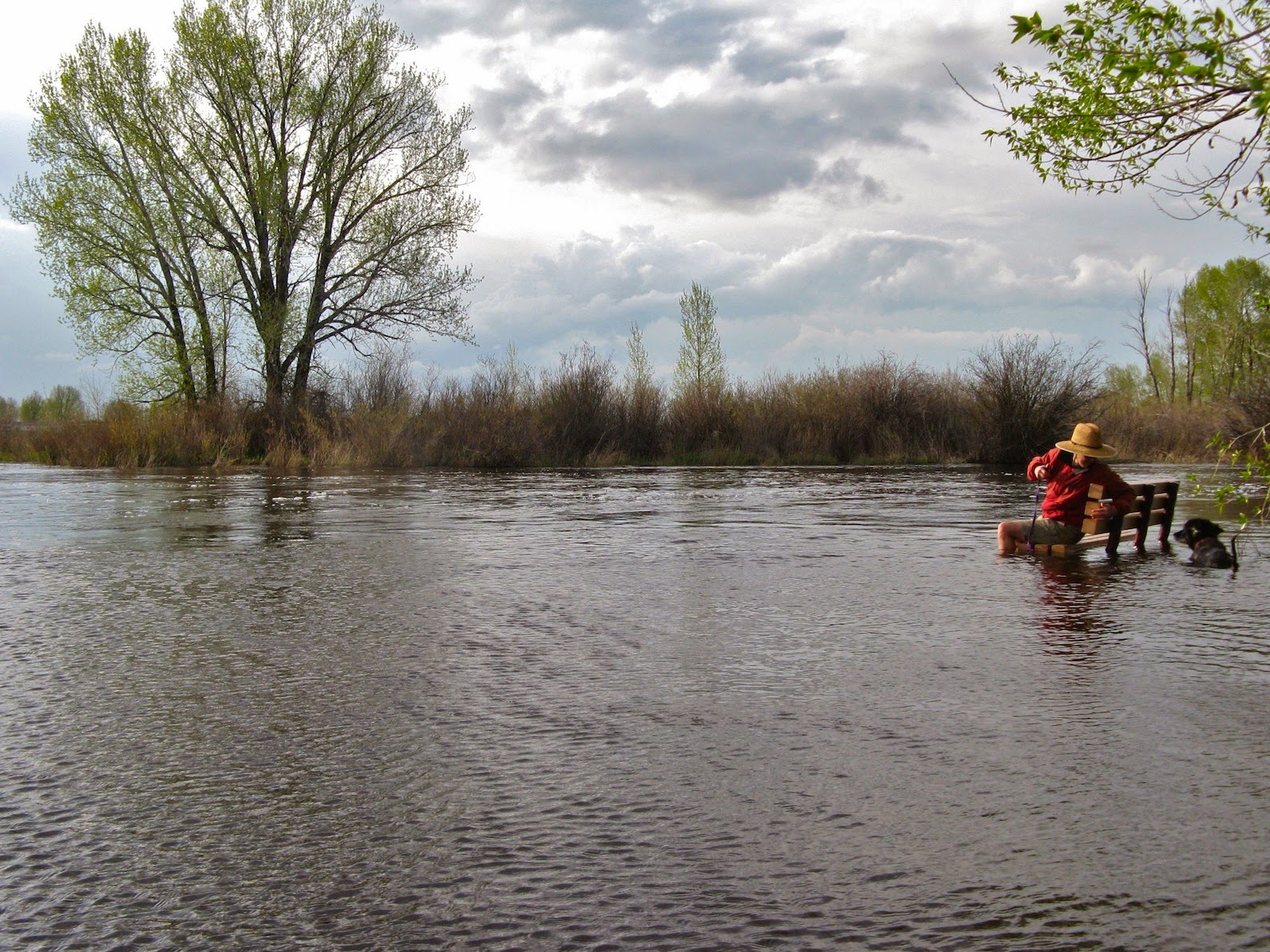 and now today -- just a minor perturbation on the surface of the water.
My cottonwood tree used to be accessible by land.  Now one needs a boat.  It’s standing on an island between the river channel and an overflow stream.
The river has taken over large areas of low land, as it often does in spring. 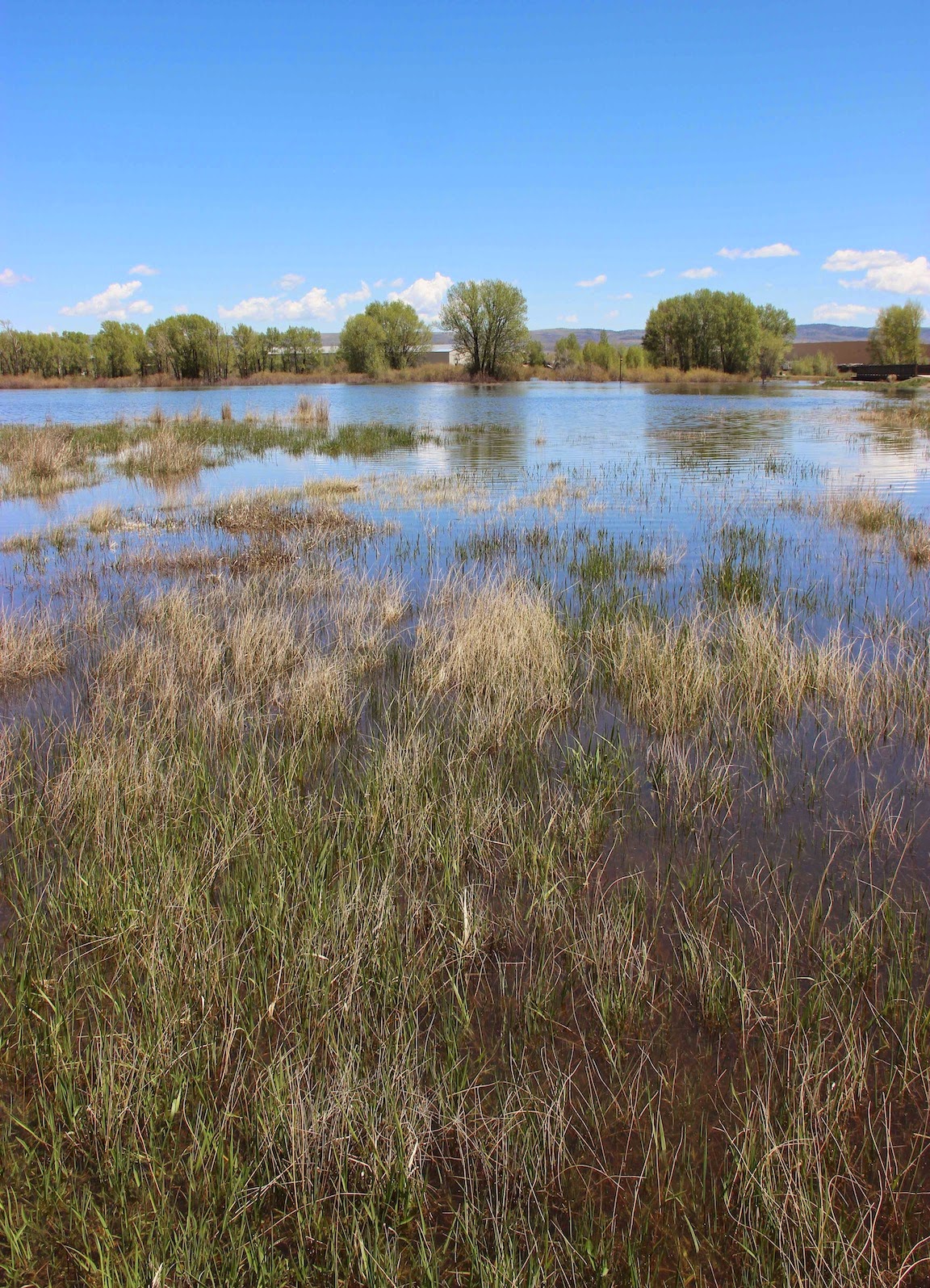 I like it when the river floods -- it makes my neighborhood seem a little bit wild.  I like watching its changing form.  Ducks and shorebirds show up to take advantage of the overflow, and the beaver are out more, not sure why.  Maybe they like it when parts of the walking/biking path are underwater and people stay away.  A few times I’ve seen beavers munching on the soft herbaceous plants that grow along the edge of the path -- like evening primroses and dandelions.
I like it when the Laramie River flows swift and full, as it's doing now.  It even drowns out the sound of trucks on the highway a short distance west!  That's a real river.

This news really belongs in my June tree-following report.  But I couldn’t wait -- it’s too exciting!  Check the post of June 8 for more.
Posted by Hollis at 3:37 PM 2 comments:

“There's a silence on the prairie that a man can't help but feel;
there a shadow growing longer now, and nipping at my heels. 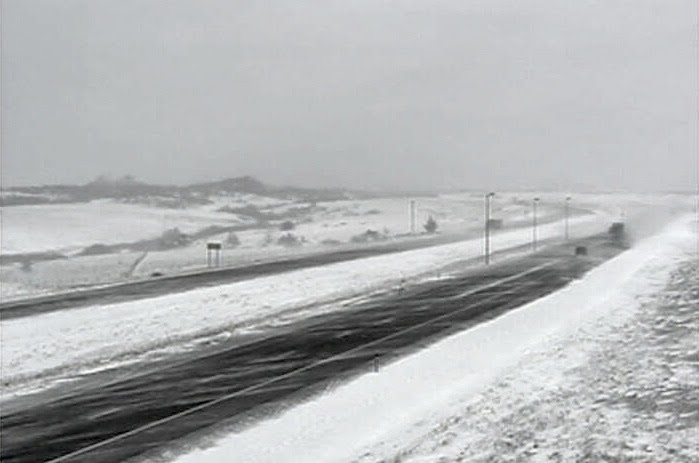 will take me home to my sweet Wyoming home” ... 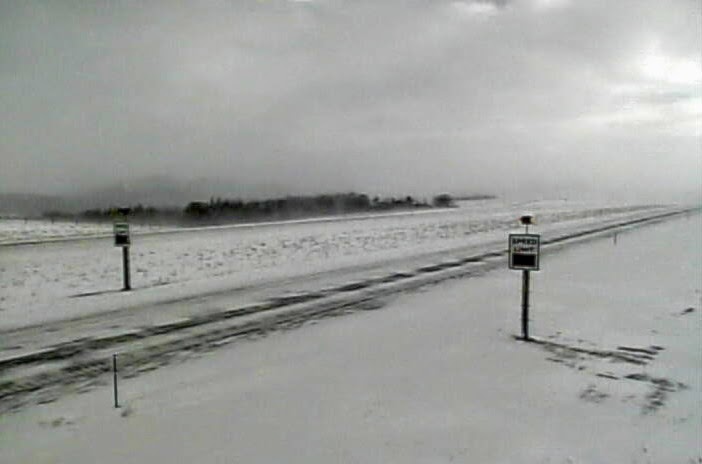 ... IF the highway is open.
Why are we here?  Why is Laramie located in a basin at 7000 feet elevation in the continental interior well away from any moderating marine influences, and only accessible by highways that cross mountain passes that regularly close in fall, winter and spring?  This is the reason:
Laramie was founded in 1868 during construction of the First Transcontinental Railroad.  Back then our government was visionary about infrastructure (and lining pockets of influential citizens).  A railroad spanning the country would be built!  The Central Pacific started in Sacramento, California and worked east, while the Union Pacific worked west from Omaha, Nebraska.  The companies didn’t just build, they raced.  They would be paid by the mile and the rates were good, so the more miles they could cover before the two lines met, the more money they would make.
The Central Pacific had to struggle across California’s Sierra Nevada almost immediately. Then they sped across the Great Basin after Stanford met with Brigham Young and secured crews of Mormon laborers.  The Union Pacific made good progress across the Great Plains but then faced the challenge of the Rocky Mountains.  Fortunately surveyors had found a relatively easy way across -- a long gradual grade rising from the Great Plains to the summit of the Laramie Mountains.  They called it The Gangplank.
From the crest of the Laramie Mountains the route wound down to the Laramie Basin.  The railroad camp there was named Laramie as well.  The first train arrived on May 10, 1868, and the next day the line was closed by a snowstorm.  Even so, the new town grew to a population of 2000 within two weeks, with most of its citizens arriving by train (source).

Laramie is where it is because of the railroad, and the railroad is where it is because of the Gangplank ... but why is there a Gangplank?  For that answer, we move into the realm of geological time.  In fact we could go back over a billion years to when North America was significantly smaller, but growing as pieces of continents collided with the southern coast, including one not far from Laramie.  But it would take quite a few blog posts to get from that Precambrian collision to the creation of the Gangplank.  We could go back just 60 million years to the uplift of the Laramie Mountains, but that story is too complicated, puzzling and long to include here.  So let’s go back a mere ten million years, to “just yesterday” geologically speaking.

Then (apparently and for reasons that are unclear) the region rose and streams were rejuvenated. Erosion took over, outpacing deposition, and much of the old mountain range was exhumed:

But not everywhere.  In one place on the east side of the mountains the younger sedimentary rocks escaped erosion.  Their fate was to be left in place, thus providing a route for the Union Pacific Railroad and now Interstate Highway 80:
The Gangplank is featured at a parking area on Interstate 80 between Cheyenne and Laramie.  I hadn’t stopped there for many years; that’s the way it is with things too close to home.  “One of these days I’ll stop and take photos for a blog post” I would say -- as I sped on by.  The other day we did stop, because the Gangplank is an EarthCache, one of only a few near Laramie.  EarthCaches are geocaches, but treasures are provided by the Earth rather than by geocachers.  The geocacher provides a description of the treasure, and several questions to be answered to prove one visited and understood:

A. Answer the questions in your own words, and to the best of your ability.

1. The large granite rocks to the West of the coordinates are Pre-Cambrian in age. Estimate how old the rocks are in years (Example: Three million)
Over a billion (I read the sign).  The Sherman granite is on the order of 1.4 billion years old, emplaced after a continental fragment collided with the south coast of North America (see Frost et al. 1999).

2. What does erosion mean?
“Removal of earth debris (e.g. soil or loose rock) by wind, water and other geological means” was my attempt.  Here’s the answer from a real geologist:  “Erosion is the general name for the processes that break down rocks (weathering) and the processes that carry away the breakdown products (transportation).”

Bonus: B. Post a photo of yourself in the parking lot with the either the plains, the granite rocks, or the informational sign in the background.  The pavement does not have to be included in your photo.
Here I am by the sign.  The sloping surface of the Gangplank shows nicely on the horizon.

Posted by Hollis at 7:39 AM No comments: 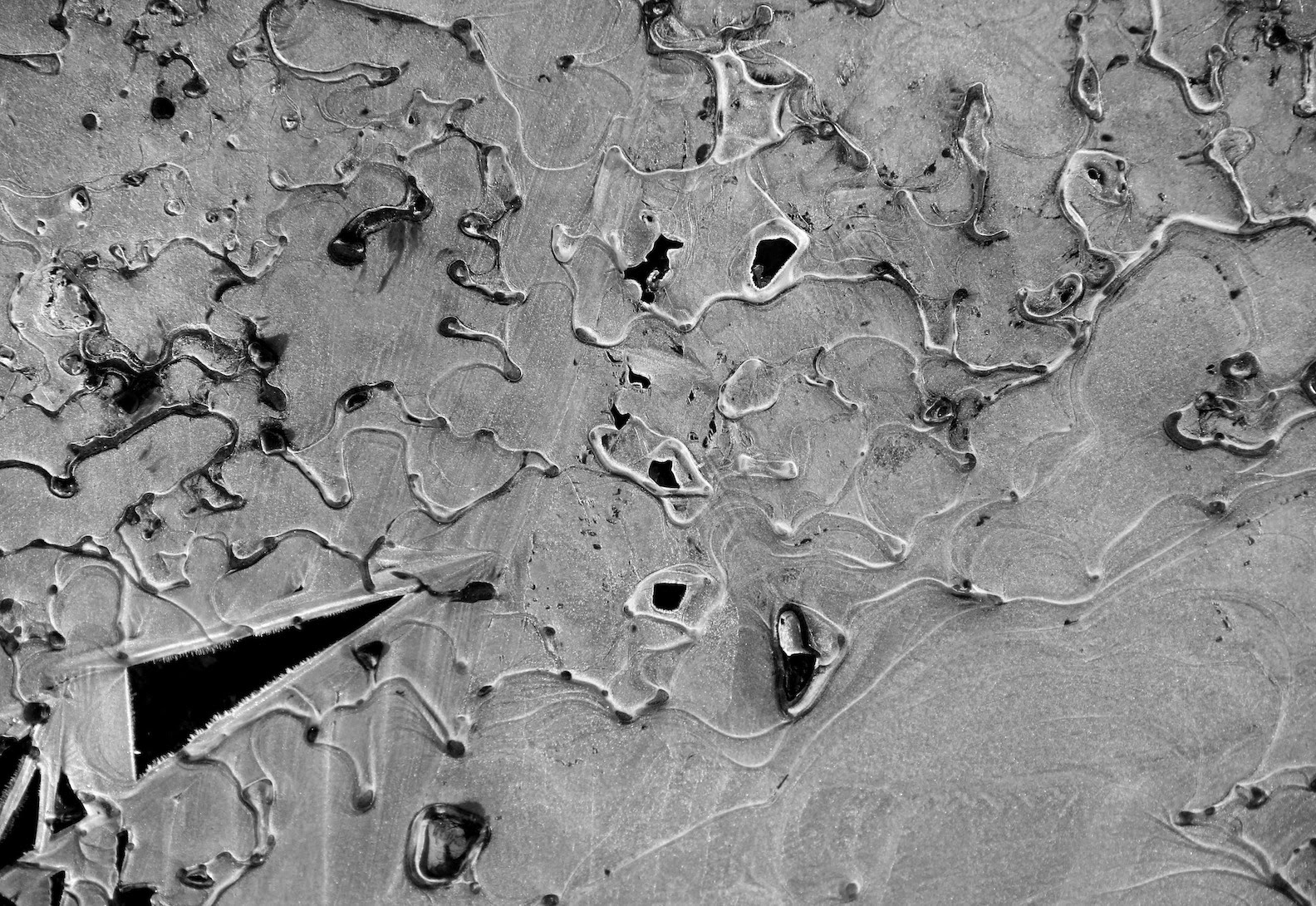 We had plenty of cold weather this winter, with several visiting arctic air masses and a decent amount of snow.  But somehow I let winter pass without any posts about ice art.  Yesterday there was one more opportunity.  Temps dropped to 10º F early in the morning and that brought Jack Frost back out of retirement for one more exhibition.

So while others are reveling in greenery and flowers, we have ice art to enjoy.  It’s fascinating.  There always are new patterns to check out and photograph.  Even mud puddles are intriguing. 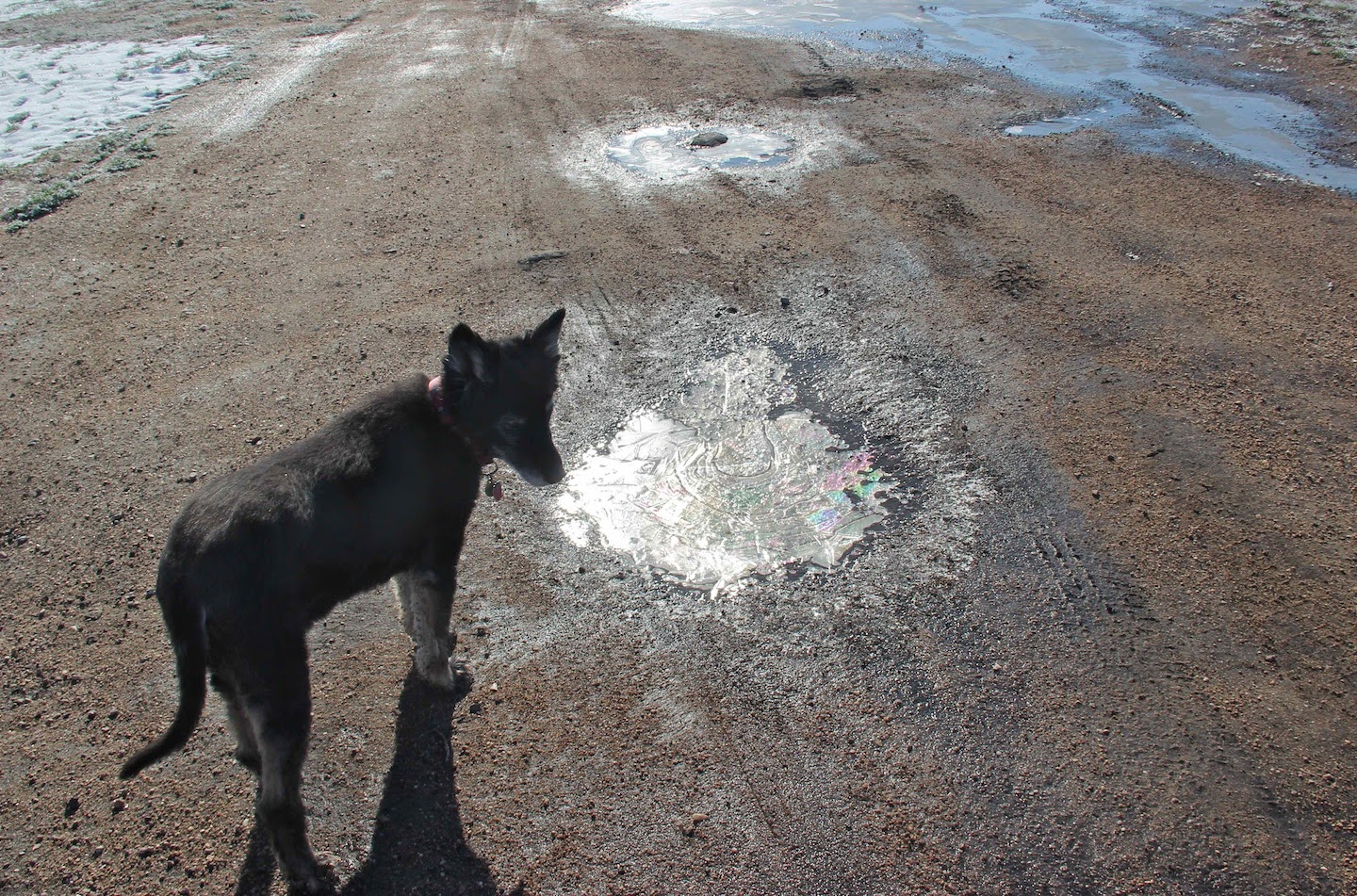 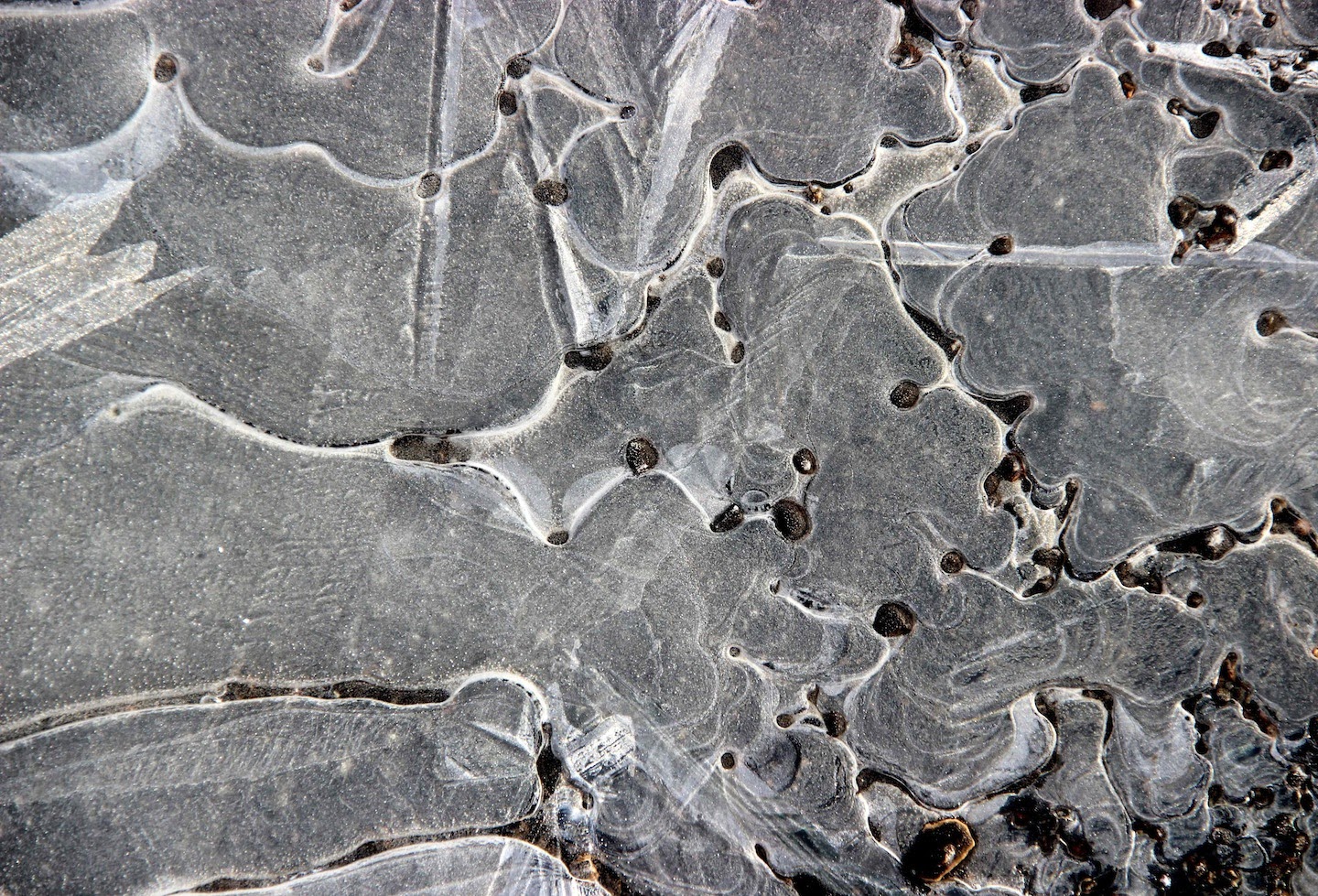 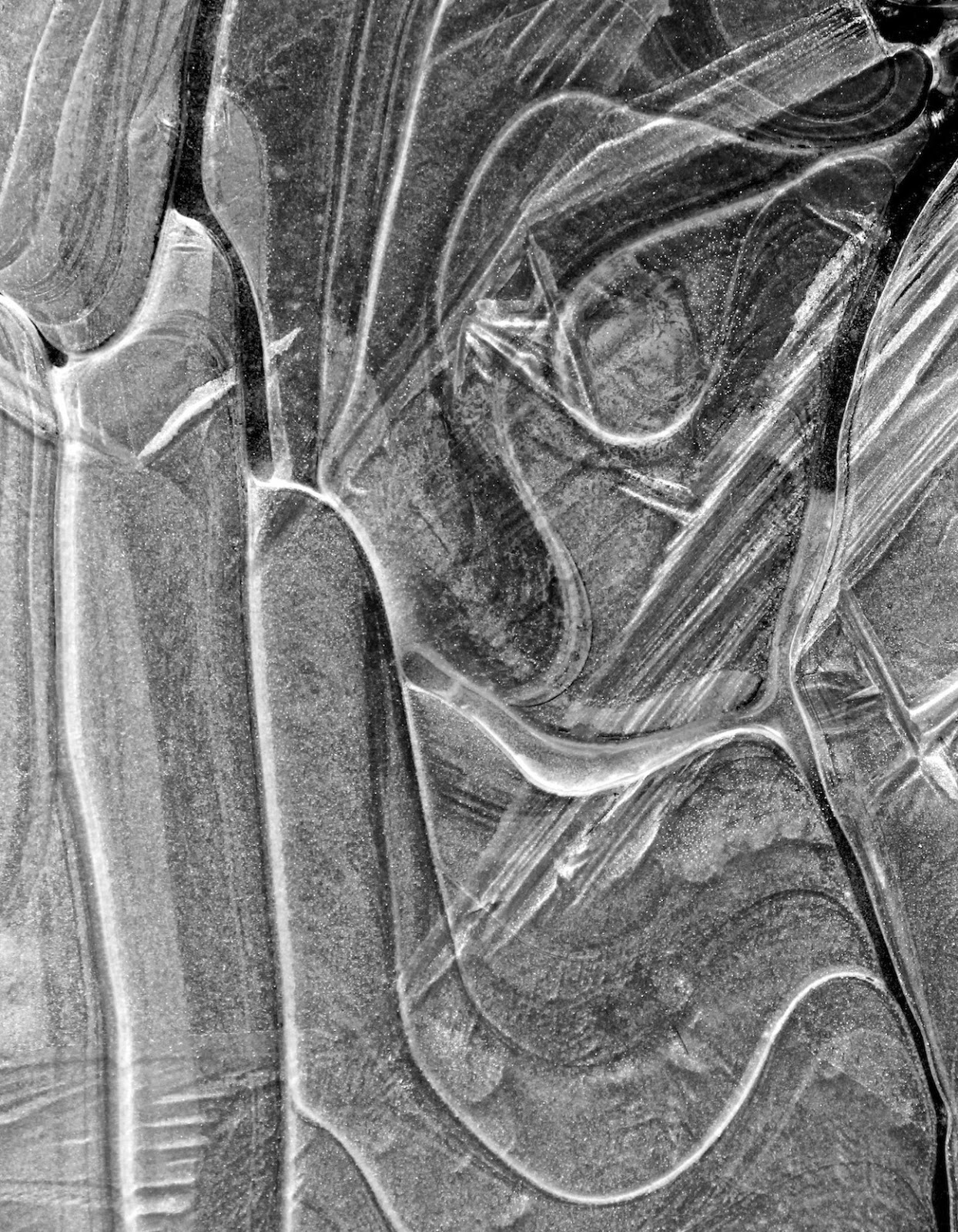 Our spring plants are tough, and can put up with Jack's doings.  His icy decorations won't last long anyway. 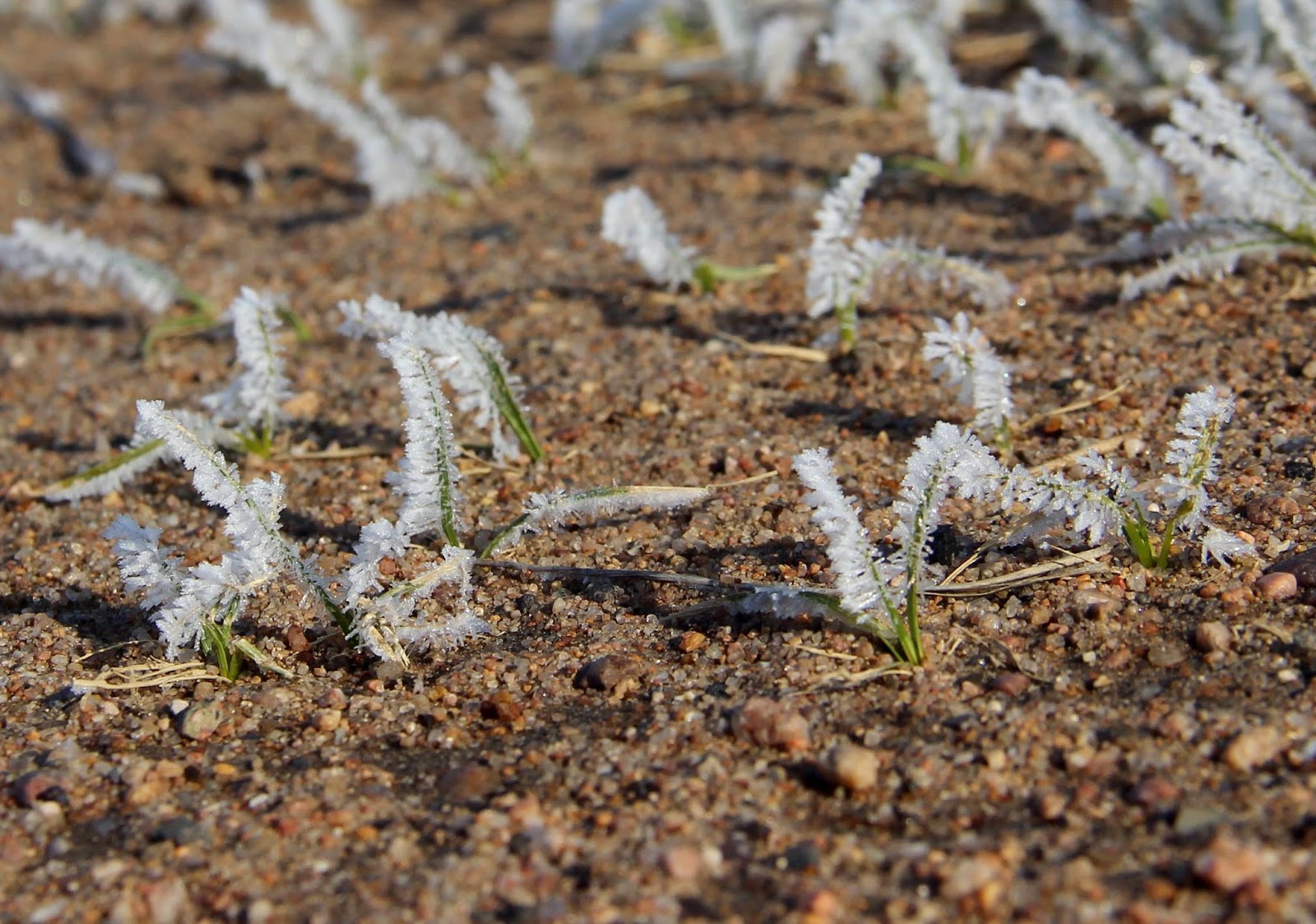 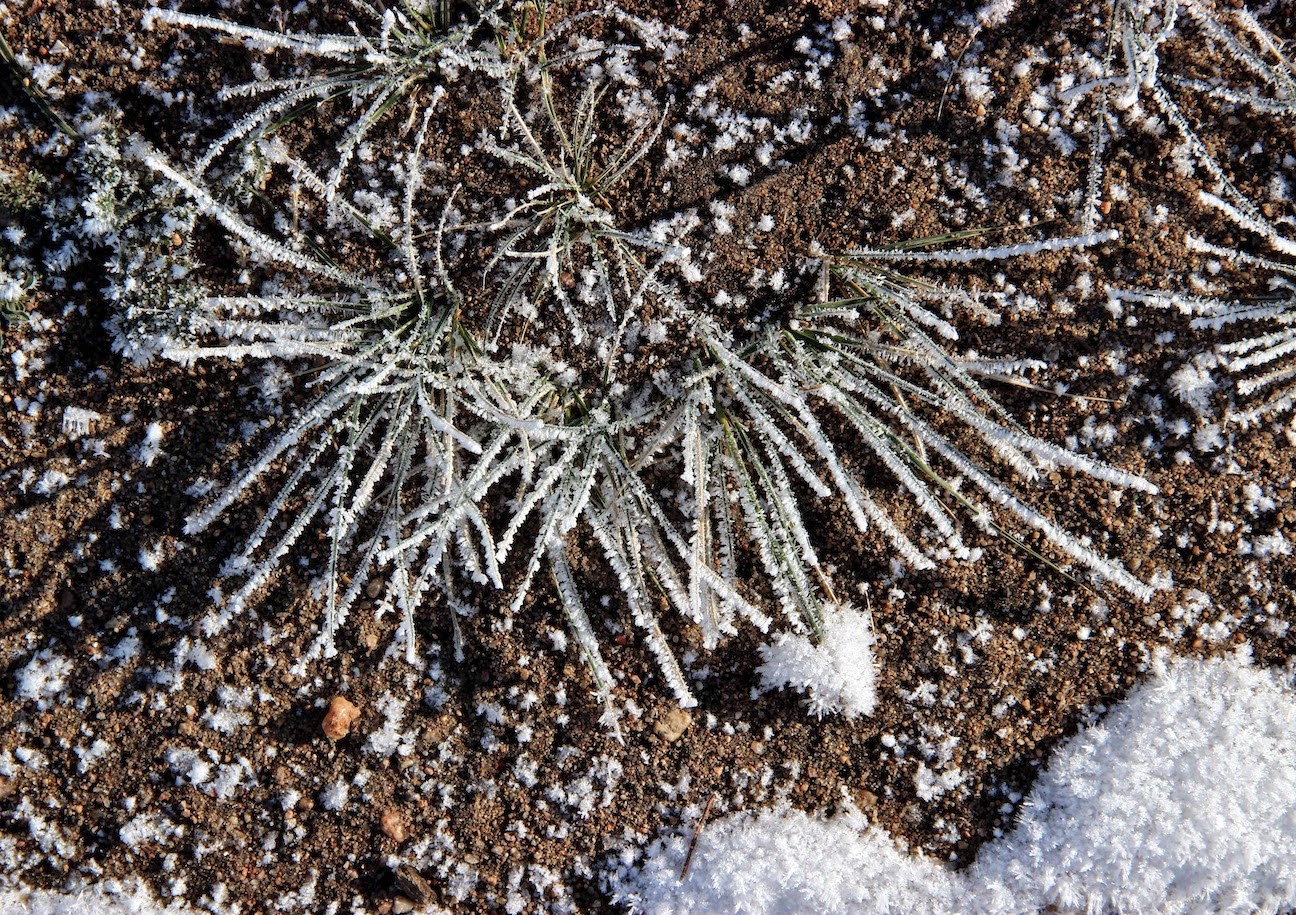 The cottonwoods still haven't leafed out.  Good thing -- we had 8" of wet spring snow the other day.  It would have piled up on leafy branches, probably enough to break some.

Recent snow and wind had knocked male catkins off the tops of the trees.  The ground was littered with males ... spent, but pretty in their frosty outfits. 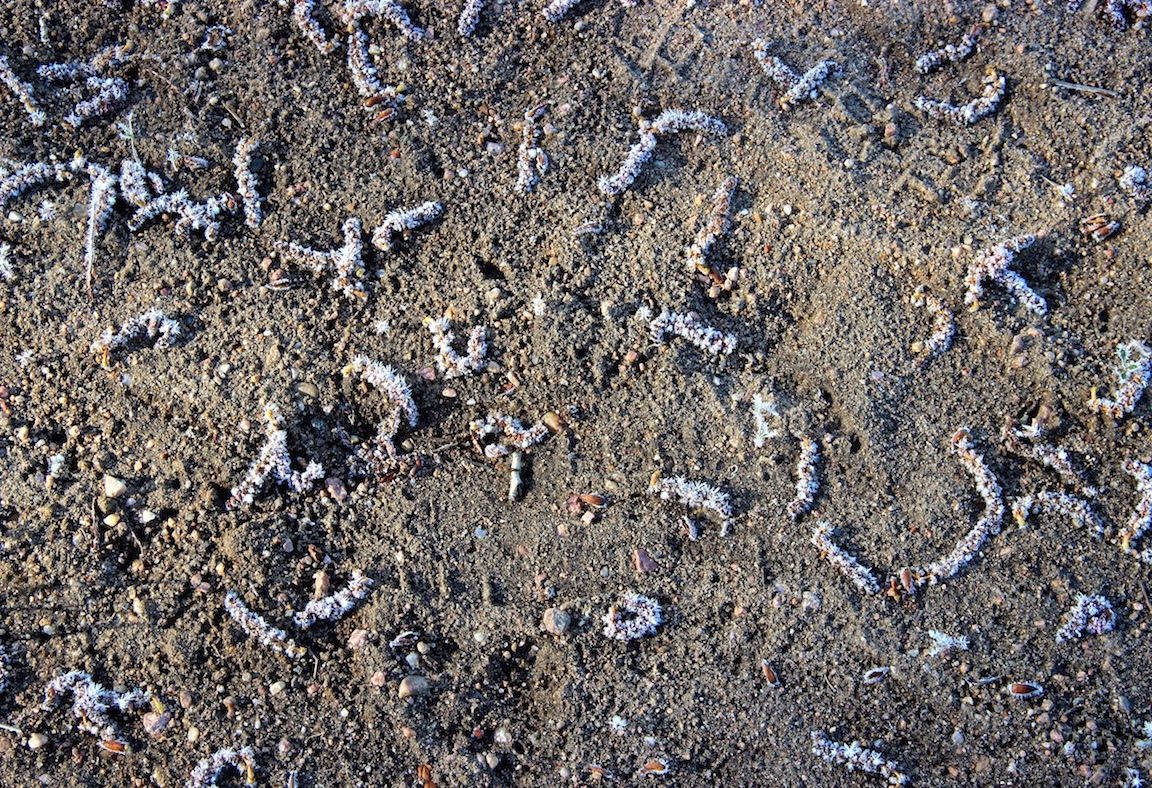 The river was ice-free, but the overflow ponds had frozen on the surface.  As always, there were neat patterns I hadn't come across before. 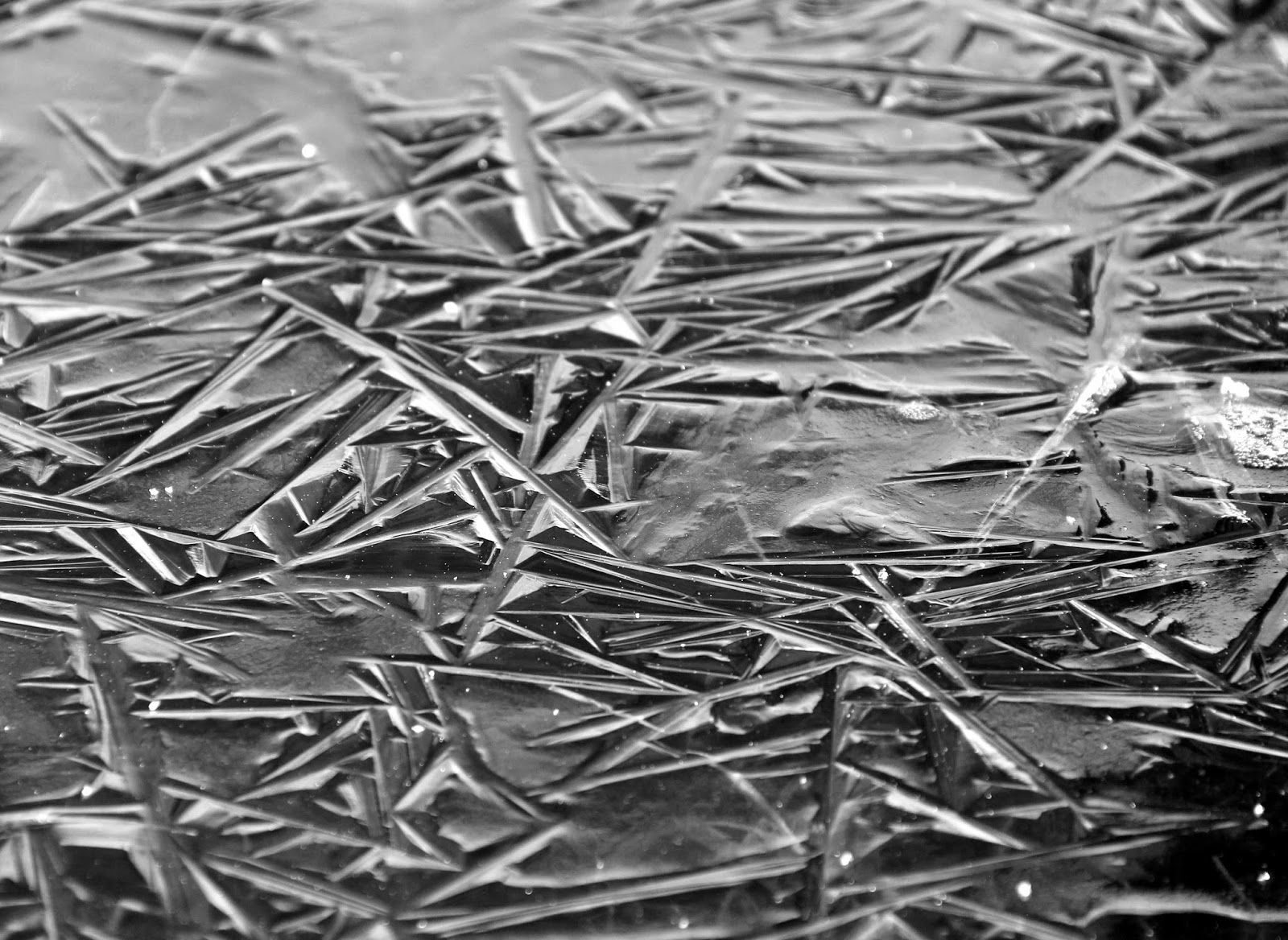 Indeed, it can take a really long time to walk just a short distance through an ice art exhibition -- there's so much to see! 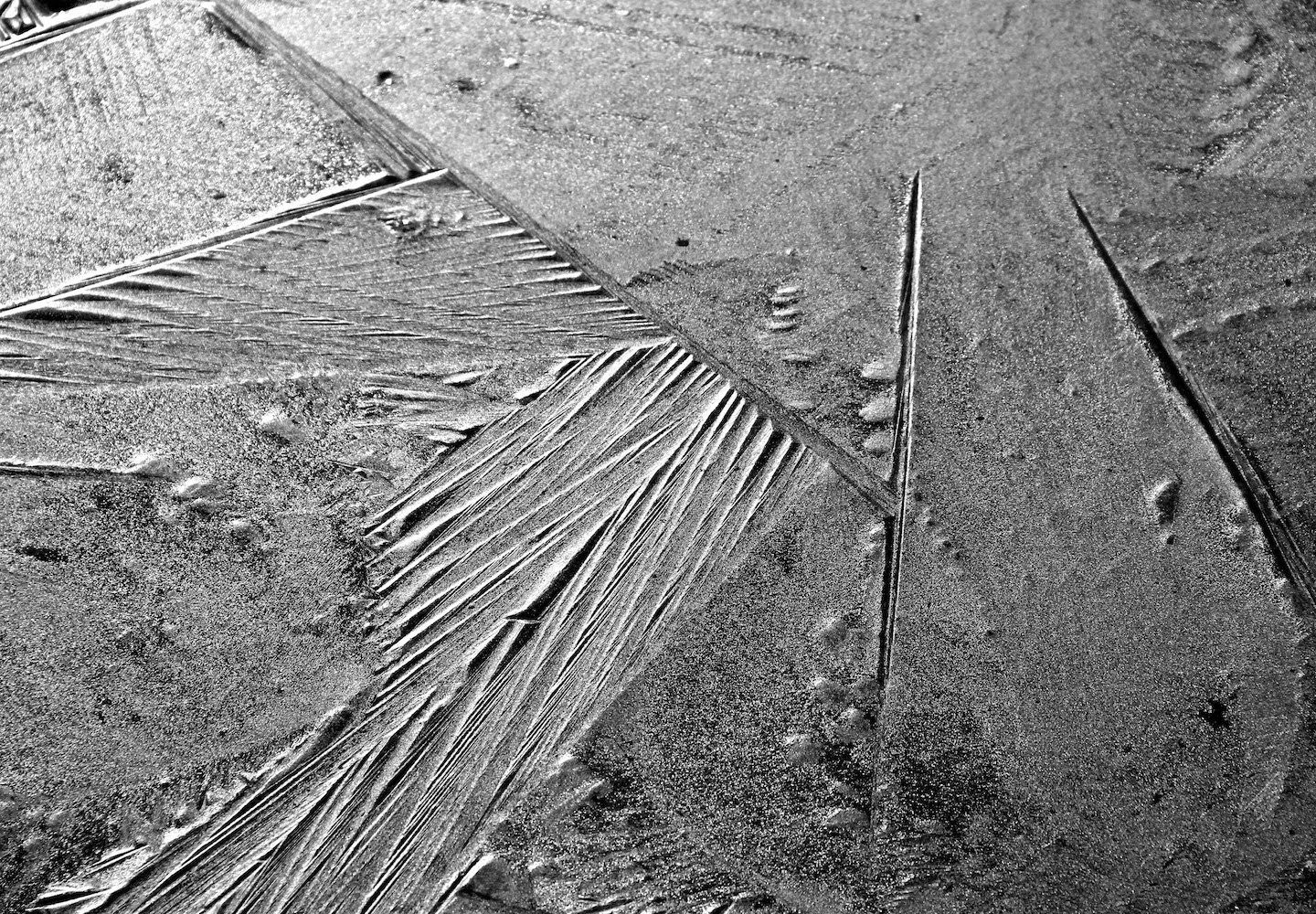 Since my first photographic exploration of ice, Jack and I have worked together a lot. For more collaborative exhibitions, see these posts.

My Tree is just a Late-Bloomer 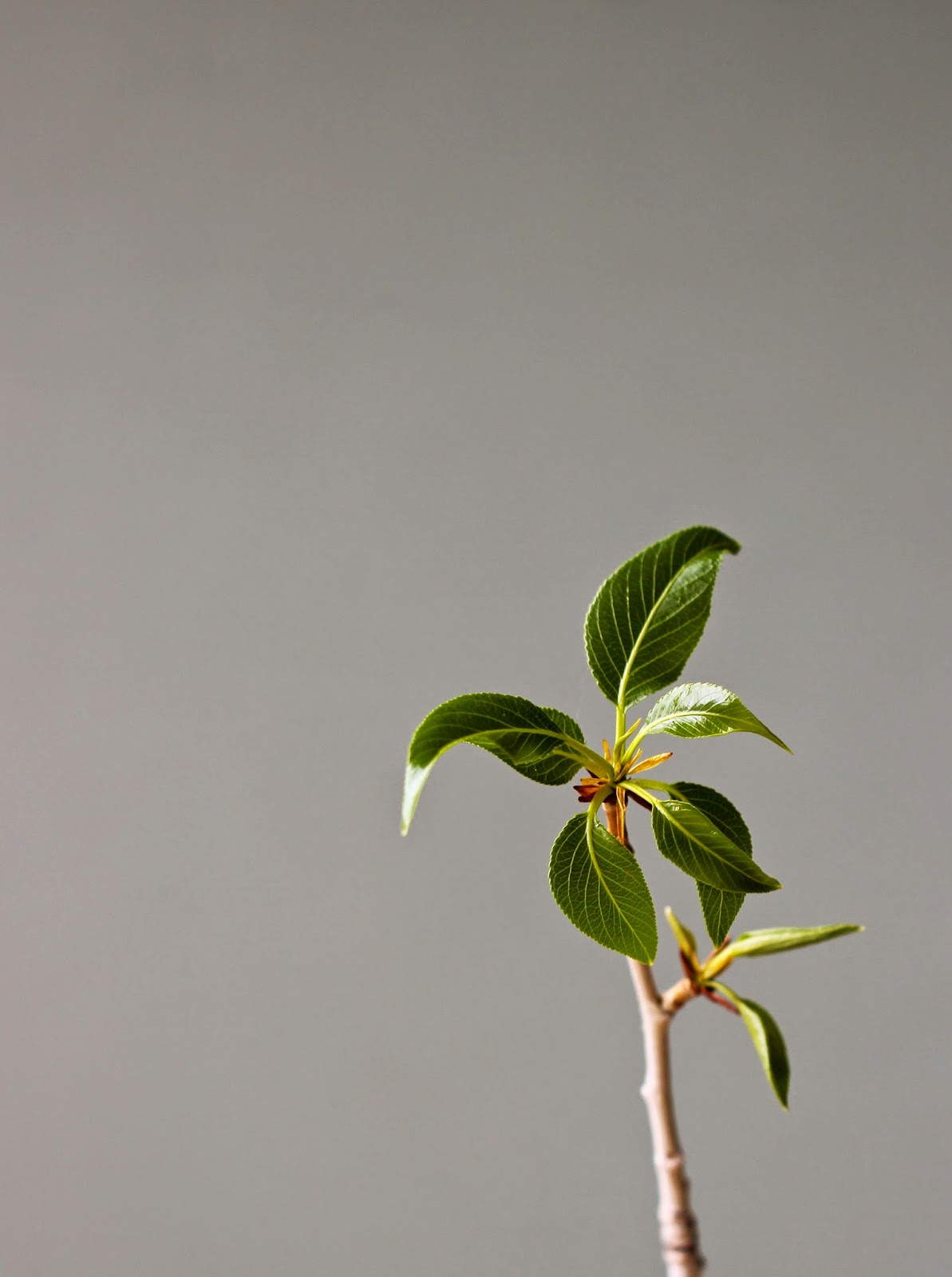 Trees are uncommon in the Laramie Basin; our native vegetation is mostly grass and shrubs.  But all along the Laramie River are gallery forests of cottonwoods, so when it came time to pick a tree to follow, that's what I chose.  My cottonwood grows directly across the river from Rich’s bench, where I like to sit and watch the evening progress.

I know this tree is a cottonwood and probably a narrowleaf cottonwood, but I’ve been waiting for spring and leaves before making a decision.  Now it’s May and there are still no leaves!  If you’re wondering about the first photo -- it’s fake.  About a month ago I clipped a few bare branchlets from my tree and put them in a jar with water.  It wasn’t long before young leaves emerged. 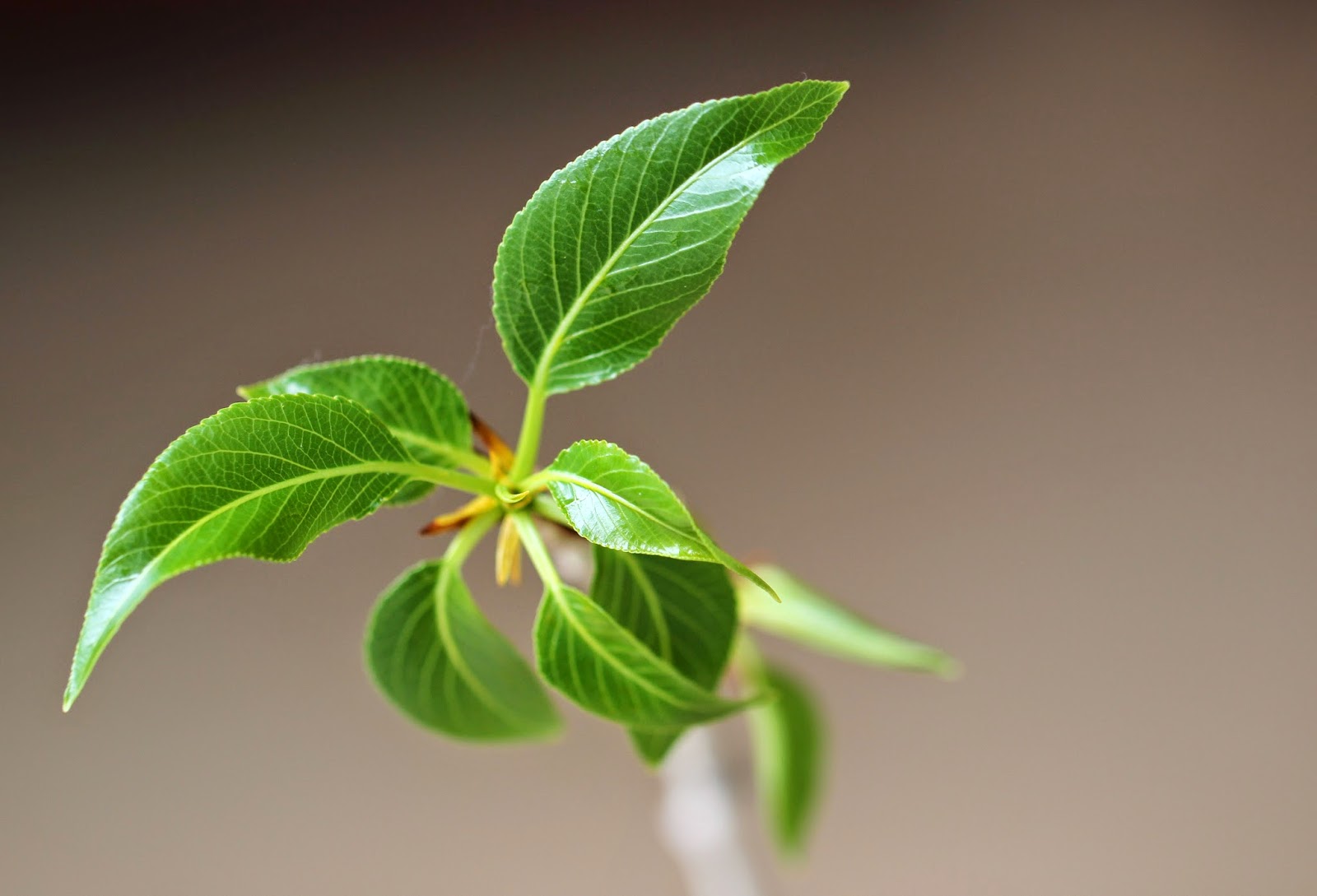 Several weeks ago I noticed that some buds on some cottonwoods were very plump, but unfortunately not on my tree.
I clipped a few branchlets from the tree on the right above and took them home.  Leaf tips soon emerged from the slender buds and out of the plump ones came female catkins (flower clusters). 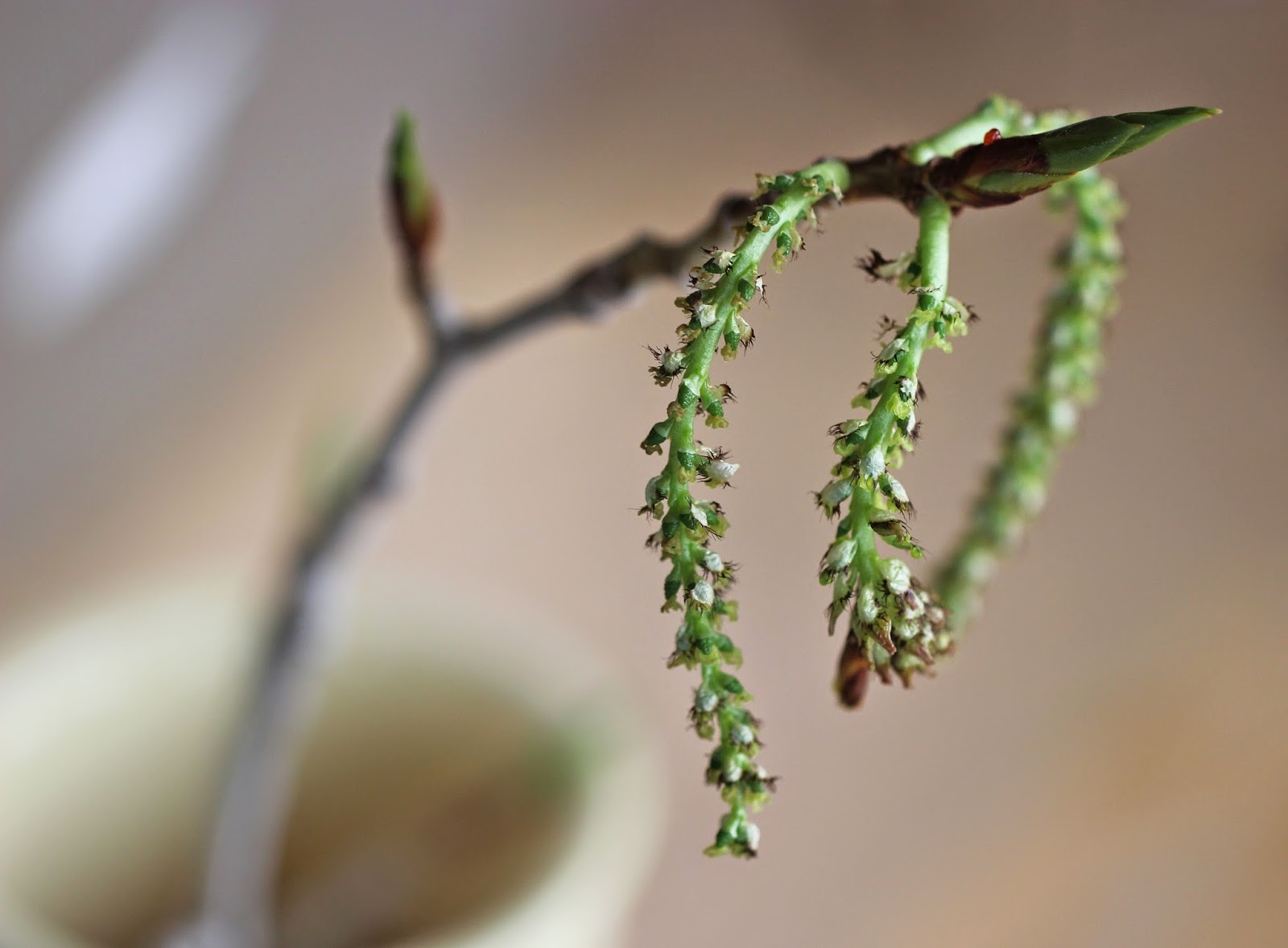 Cottonwood flowers aren’t much to look at.  They’re tiny and have no petals.  But they do have reproductive structures and that's what counts.  A female cottonwood flower is simply a pistil sitting on a cupped disc.  Seeds will develop in the ovary after fertilization.
If you click on the image below, you'll see green pistils sitting on pale green discs.  Their stigmas are the yellowish structures at the tip.  Scale is in centimeters. 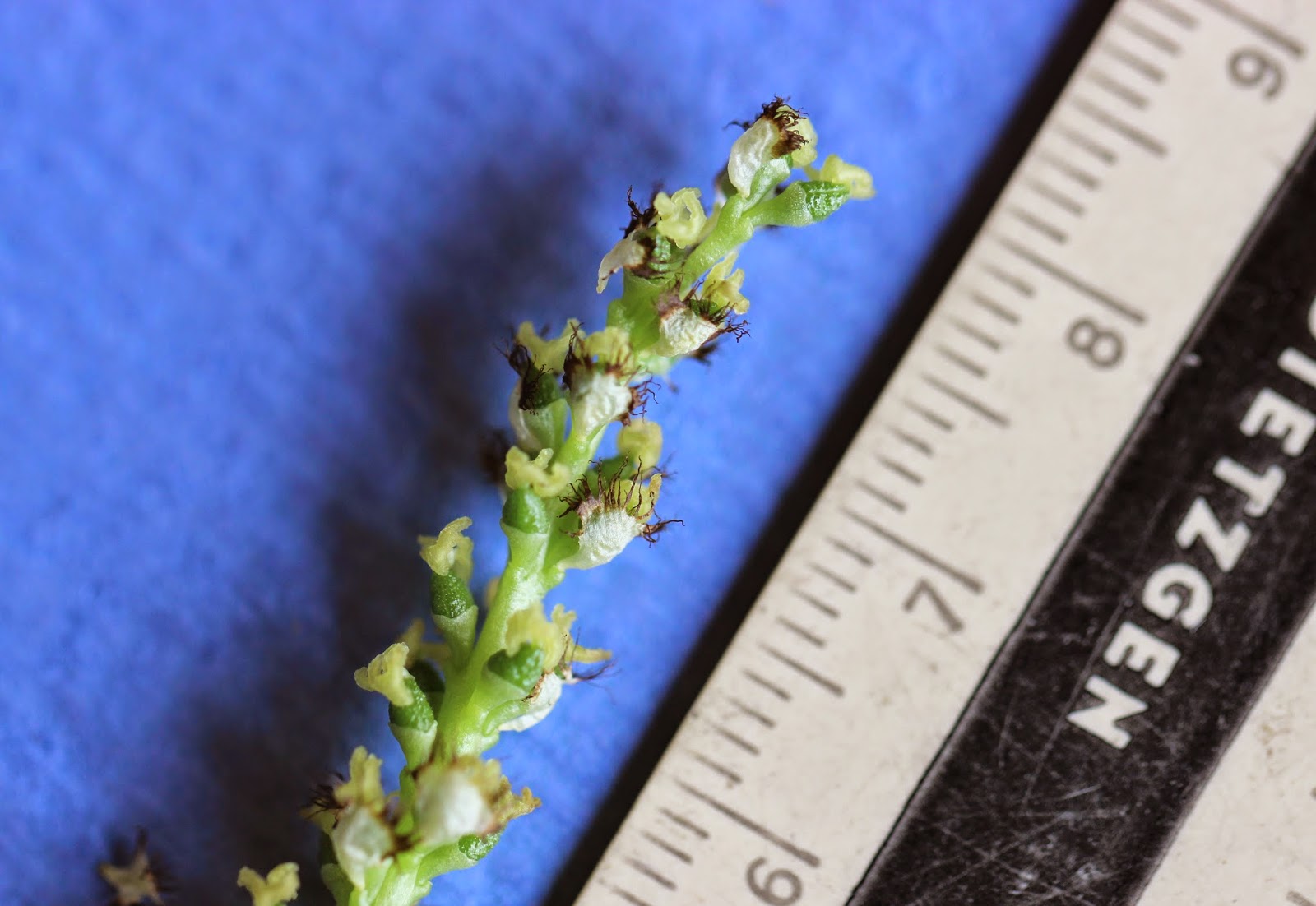 Then just a few days ago I noticed that my tree had two kinds of buds, including plump ones (below).  This was great news!  I wanted to collect some of course, but they were all out of reach. 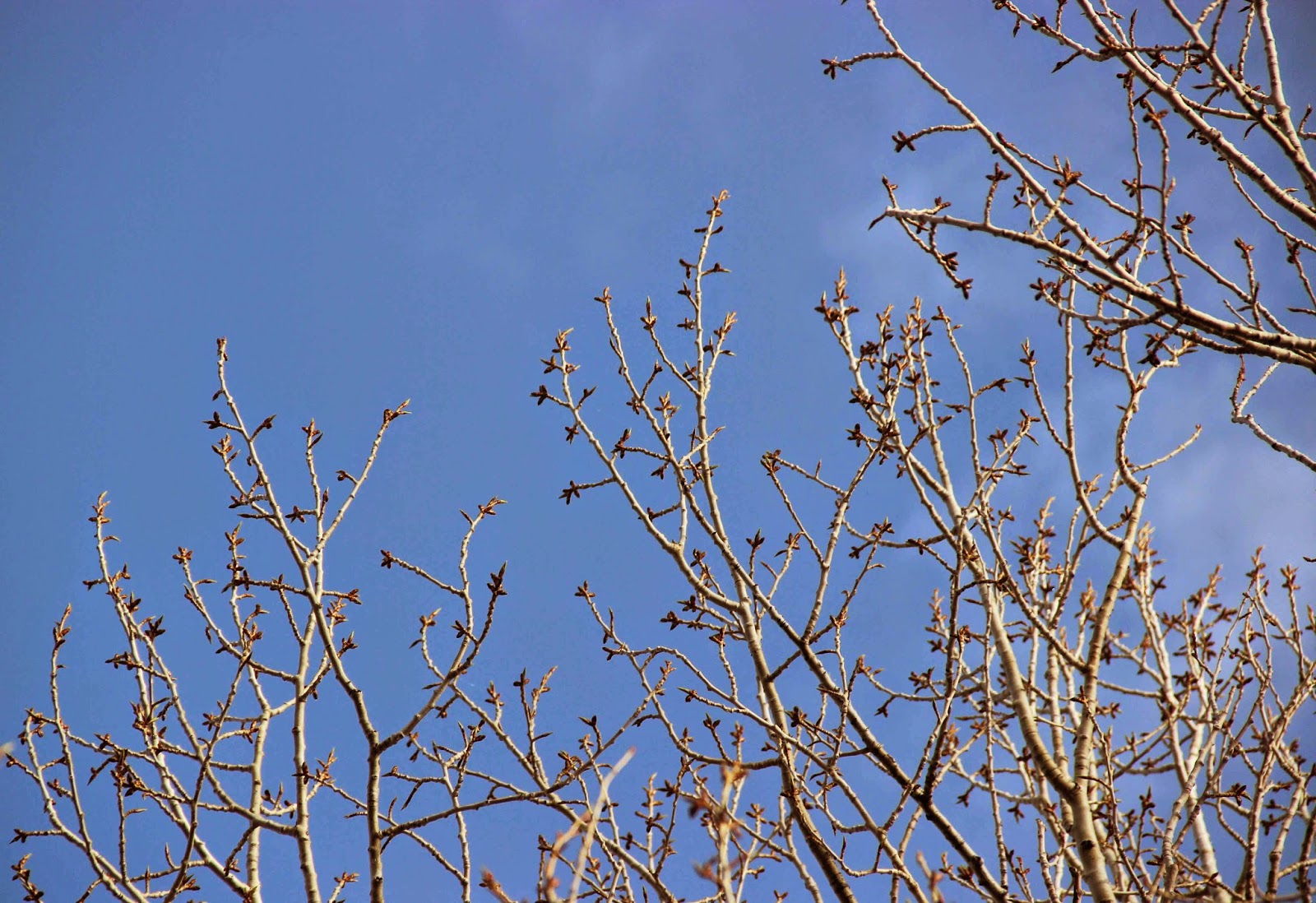 Yesterday I found a long stick on the ground by the tree.  I pushed through the willows to where I could hook and pull down a branch and get a few plump buds.  There were catkins peeking out of them.  What do you think ... guys or gals?
Cottonwoods have male and female flowers on different trees (dioecious).  Since the female trees were already blooming, I was tempted to think the plump buds on my tree would produce male catkins.  But I’ve learned not to jump to conclusions.  Plants have fooled me before!

I was right to be cautious.  When I was photographing cottonwood parts, I noticed that catkins were emerging from the plump buds I had collected just an hour earlier.  So I put them by a window and checked back in the afternoon.  They had lengthened even more.  I peeked behind the floral bracts with a 10x hand-lens and found ... 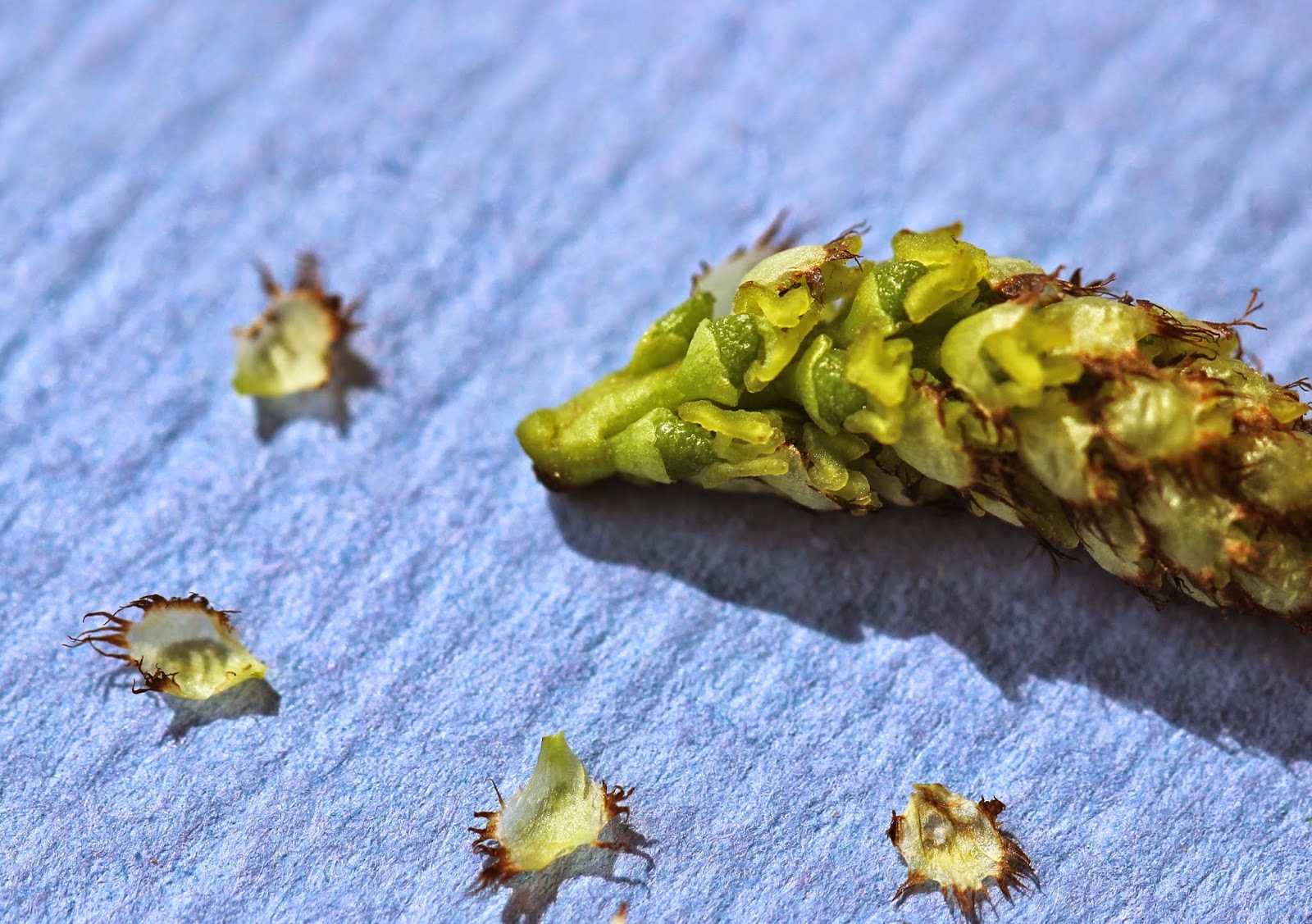 ... little green pistils sitting on cupped discs.  Turns out my tree is female too, but she’s a late-bloomer.  So where are the guys?  I don't know, haven't seen any yet.  Maybe I'll be able to answer that question next month. 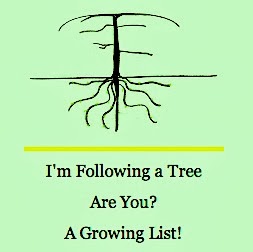 Many thanks to Lucy for getting us going on these adventures.  Check out the latest news about our trees.