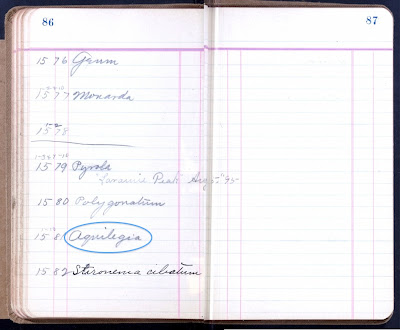 This month’s Accretionary Wedge is being hosted by Jennifer at Fuzzy Science, and the topic is Field Notes.  Now that’s a broad one! ... I’ve been waiting to see what came to mind.  It finally appeared just in time for the deadline today, June 31.  These are botany field notes, perhaps at first glance not appropriate for the geoblogosphere, but they are notes about a plant that grows in rock ... and not just any rock.  And like all field books, when we peruse them we can visit the past, and sometimes even meet the early explorers and share in their discoveries.

The page above is from an early field book of Aven Nelson, Founding Father of Wyoming Botany.  The University of Wyoming Library currently is scanning all his field books, and soon they will be available online. 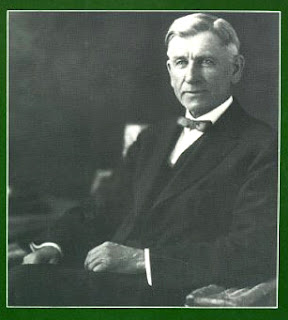 Nelson was hired by the University in 1887 as Professor of English.  It was only after all six of the faculty had arrived at the new university that the president discovered he had inadvertently hired two English professors.  Nelson had attended six botany lectures as an education student, and so was made Professor of Biology.  He went on to make many pioneering contributions in botany in Wyoming and the Rocky Mountains, and was an inspirational teacher, with many of his students becoming prominent botanists themselves.

In 1895, Nelson was in the midst of a “systematic survey” of the Wyoming flora, devoting his summers to expeditions by horseback across the state.  On August 4, he was hiking up a canyon in the rugged Laramie Mountains of southeast Wyoming when he discovered a small columbine growing in granite on the east side of Laramie Peak.  In his final report the next year, he described Aquilegia laramiensis, the Laramie columbine, one of the earliest of his many botanical discoveries.


[Fast-forward ca 110 years ...]
In 2003, the Laramie columbine still was known from only a few locations, all in the Laramie Mountains, most on lands managed by the Forest Service and Bureau of Land Management.  Off and on over the next six years, we worked for these agencies to inventory and prepare a status report on the apparently-rare Laramie columbine.  It was a tough job, but the scenery was fantastic, and I was awestruck whenever I found elegant little columbines growing in nooks and crannies of rugged granite outcrops. 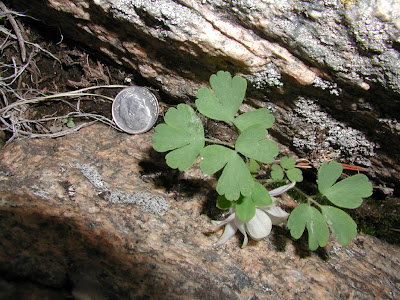 In keeping with its name, the Laramie columbine grows only in the Laramie Mountains of southeast Wyoming.  It remains a rare plant even after extensive survey, though it is fairly common within its rugged and tough-to-access habitat.  It grows mainly in Archean granite outcrops, but also in metamorphic rocks from early Proterozoic accretionary events. The columbines are restricted to well-shaded sparsely-vegetated microsites, and looking for them is a bit like hunting for easter-eggs ... chocolate easter-eggs that is, i.e. well worth the effort! 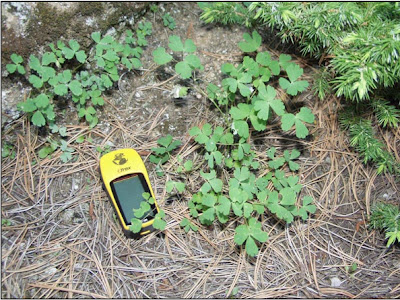 I had a personal reason to be excited about this project, for I had "met" Aven Nelson during my first encounter with Wyoming botany.  As a budding botanist and seasonal ranger at Devils Tower National Monument many years ago, I was curating the herbarium and came across plant specimens collected by George W. Giles in a project for the Work Projects Administration (WPA) in the early 1930s.  In his field notes, I could feel and empathize with the enthusiasm of a young botanist.  I read correspondence regarding the specimens he had prepared and sent to Professor Aven Nelson at the University of Wyoming, the leading expert on the region's flora.  And now here I was, following in the great professor's footsteps in the rugged Laramie Mountains.
For more on Aven Nelson, the Laramie columbine and the northern Laramie Mountains, see Plants and Rocks: columbines and granite.

Posted by Hollis at 4:51 PM No comments:

Continuing my series, we go a short distance west from Grand Junction, Colorado, to view tafoni in Rabbit Valley. 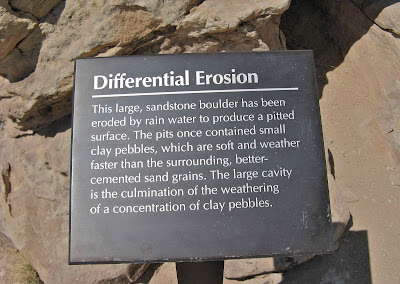 Remnant features can be tough to explain -- they are products of weathering and erosion, created and defined largely by what has been taken away.  Often we can only speculate as to what happened but here in Rabbit Valley, it appears someone has it figured out.
The explanation on the sign seems reasonable, as the rock here is a mix of fragment sizes and types.  It is gravelly sandstone from the Late Jurassic Morrison Formation, deposited by rivers roughly 150 million years ago.  Think about wading a river and walking across sand bars and gravel bars.  Here we have sand and gravel bars that dinosaurs walked across, now preserved in rock. 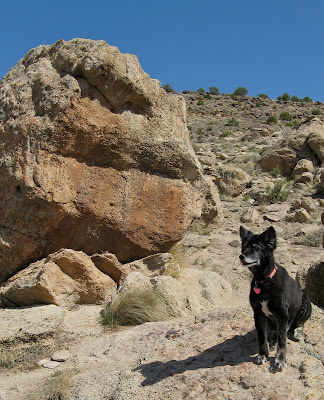 Rabbit Valley, home of the Mygatt-Moore dinosaur quarry, is accessible from Exit 2 on Interstate 70, about 25 miles west of Grand Junction. A 1.5-mile nature trail tours Morrison boulders and outcrops just east of the quarry. 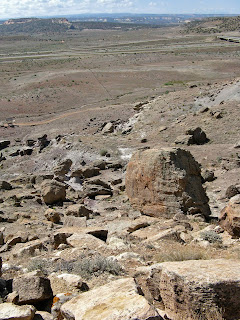 Left:  Boulders on the dry slopes of modern-day Rabbit Valley were once beds of sand and gravel in rivers where dinosaurs drank. Below: Rabbit Valley back in the day. 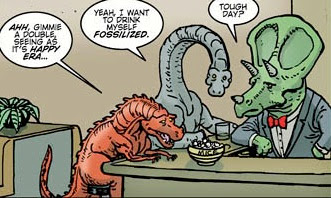 Posted by Hollis at 7:43 AM No comments: 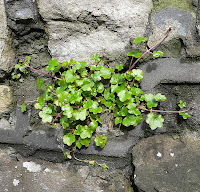 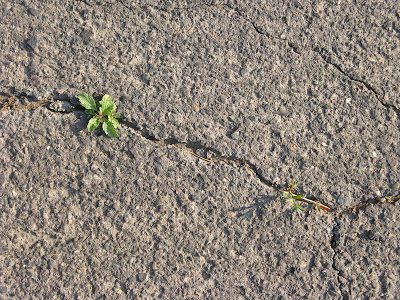 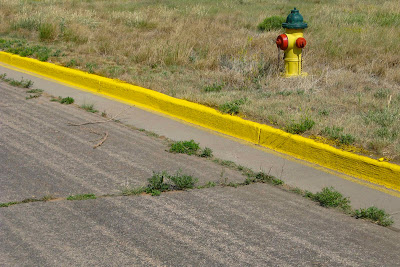 Posted by Hollis at 7:50 AM No comments: 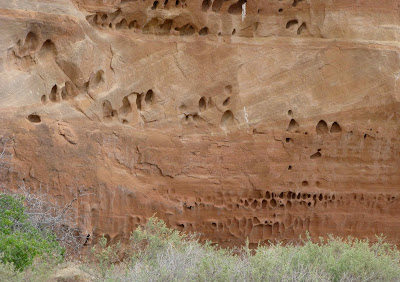 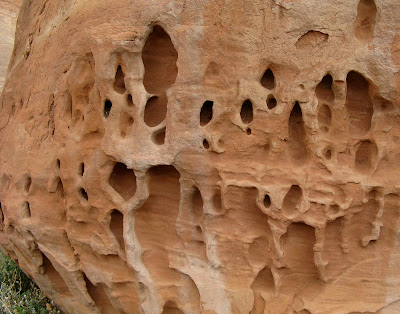 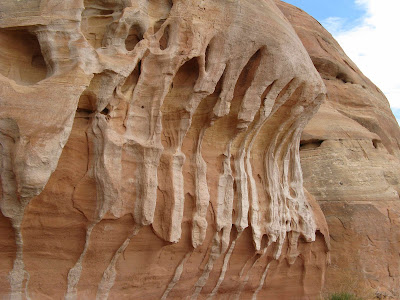 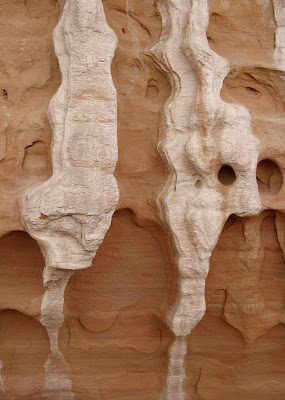 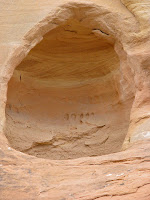 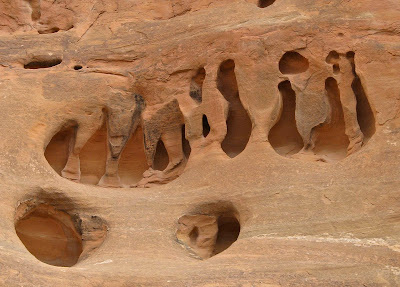 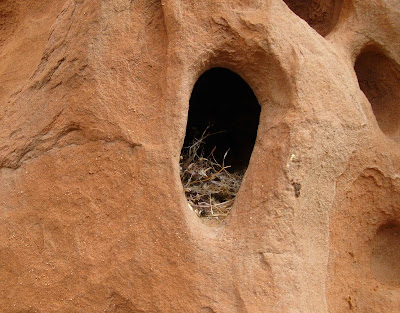 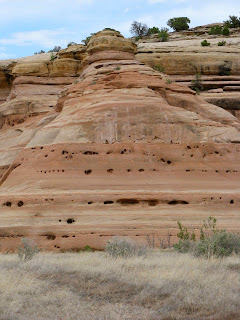 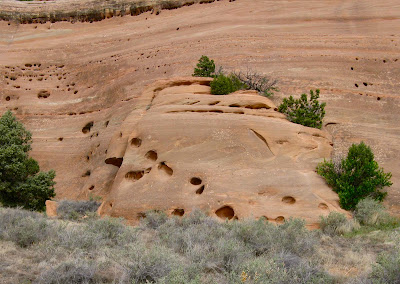 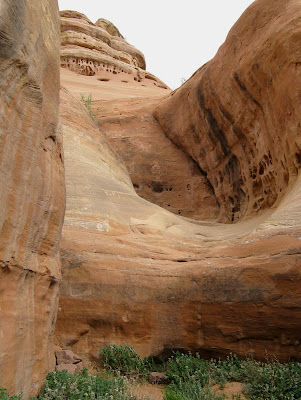 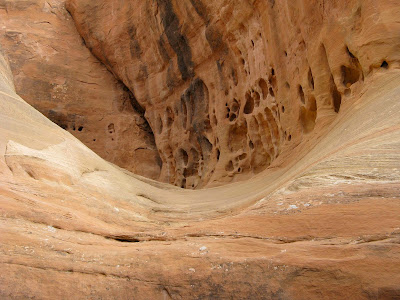 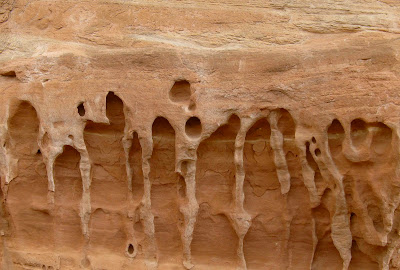 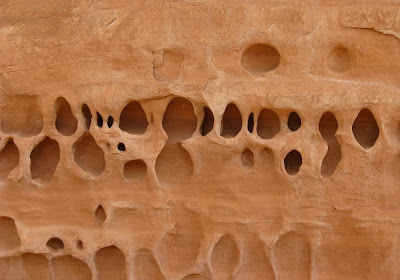 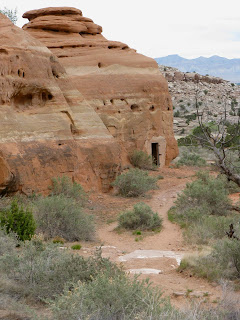 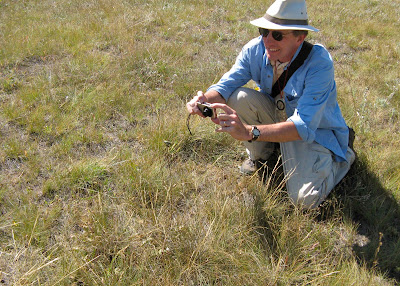 In the Company of Plants and Rocks is hosting June's blog carnival at Berry Go Round, featuring all things botanical.  This is a challenge to geobloggers as well.  The deadline is approaching so get your creative juices going.  Plants, pests, pathology, seeds, weeds, wildflowers, food, fuel, fossils, science, art, music ... the possibilities are endless. 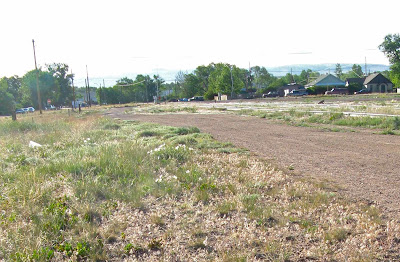 This morning was our first calm one in a week, completely still with nothing to disturb the white decor (aka litter, trash) that had blown in yesterday and now festoons the vegetation along the tracks.  Or is that trash? 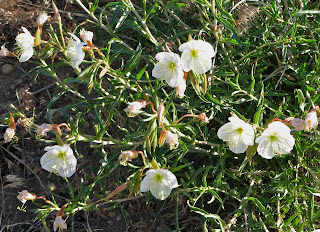 No! All those pieces of white plastic actually are evening primroses, still open this morning.

Posted by Hollis at 3:26 PM No comments: