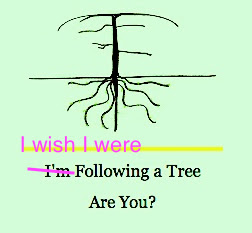 One problem after another, most recently–this morning–a dead laptop, hopefully temporarily. I resurrected an old one, and in spite of being pretty demoralized (this on top of COVID 19 (I mean the craziness, I'm not sick)), I'm attempting to be part of the monthly tree-gathering, so kindly hosted by The Squirrelbasket. More news from tree followers here.

I didn't make it to LaBonte Park yesterday. After "rehearsal" during which we (University symphony orchestra) performed for ourselves, and clapped when we were done (5 weeks of work down the drain due to COVID cancellation), I went outside to snow. That would be Laramie snow, traveling sideways in the strong winds. So we went home.

Instead, we walked down to see an old tree friend, the cottonwood on the Laramie River that I followed in 2015. Here are a few photos.


Reaching and crossing the Laramie River, just a five minutes from home :).
Tree isn't doing much—of course. This is 7200 ft in the heart of the continent. 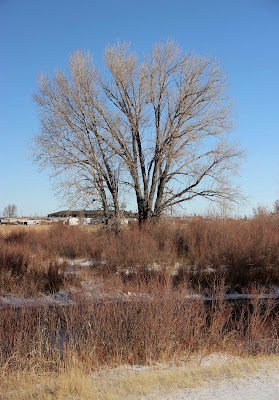 No sign of flowers or leaves. How about some bark instead? Old is furrowed, young is smooth and pale. 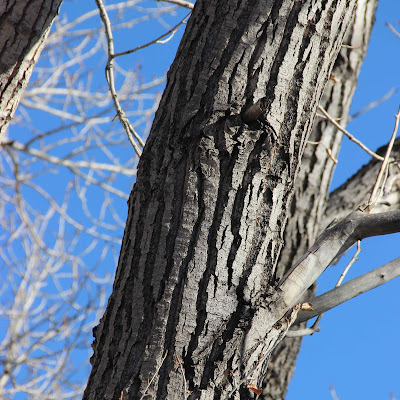 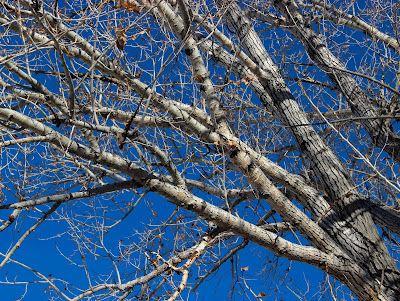 Best wishes to all, and stay healthy!

Stink Lake in a Sink Hole & other marvels of gypsum

If you've lived in Laramie long, you must know LaBonte Lake—the pretty little pond in LaBonte Park, west of 9th St. between Canby and Shields. On fine summer days it sparkles in the sun, a blue gem set in green grass. But have you ever noticed that no stream flows in or out? Have you ever wondered why there’s a lake there at all?

The explanation lies well below the sparkling surface, below the haunts of the salamanders that migrate to and from the lake in spring and fall, even below the lake-bottom muck, rich in tiny creatures whose heady breath gives the pond its other name—Stink Lake. The explanation resides deeper still, in the convoluted tunnels and chambers that wind through Laramie’s gypsum-rich dirt.

Ancient seas to toothpaste and pyramids

Most of us are familiar with gypsum. It surrounds us in plaster and sheet rock, and is an important component of toothpaste and concrete (portland cement). It forms casts for broken body parts, and is widely-used as a soil amendment. Builders of Egyptian pyramids filled gaps between their rough-hewn stones with gypsum plaster.

Gypsum is a mineral so soft that it can be scratched with a fingernail, occurring in forms ranging from powder to rock. It starts as calcium and sulfur dissolved in saltwater. These chemicals react to form gypsum if the saline water undergoes enough evaporation—that’s why gypsum is said to be an evaporite.

Wyoming was a great place for evaporites 200-300 million years ago. A shallow sea repeatedly covered the region, and sea level rose and fell many times. Often when the sea dropped, it left behind mineral-charged isolated bodies of water. Apparently there was plenty of evaporation, for gypsum crystallized out forming thick deposits on the sea floor.

During the millions of years that followed, these gypsum deposits were buried and became rock under the pressure of hundreds of feet of sandstone, limestone and shale. Later, when the Rocky Mountains were uplifted, erosion removed enough of the rock cover to the expose gypsum in places, for example on the west flank of the Laramie Mountains. This was noted by newspaperman Leigh Freeman in 1868. 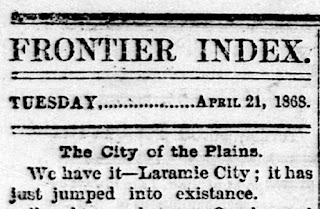 “Observe the splendid beds of gypsum”

That spring, the Union Pacific Railroad reached the Laramie Plains on its race west to complete the great Transcontinental Railroad. Construction crews arrived in April, accompanied by their entourage of merchants, saloon operators, gamblers, prostitutes, and a “press on wheels”—The Frontier Index. The Index was Laramie’s first newspaper, but only until July, when it relocated to Green River.

In the April 21 issue, editor Freeman extolled the virtues of Laramie in an article titled The City on the Plains: “The railroad towns between Omaha and the Rocky Mountains … are alive and flourishing, but none of them have one-hundredth part of the natural advantages that Laramie boasts of. Look yonder at those heavy bodies of timber; take a glimpse of the iron and copper graves that dot the whole country over, see the coal cropping out from one end of the plains to the other; observe the splendid beds of gypsum …”

Uncharacteristically, Freeman was accurate about Laramie’s gypsum. It truly was “splendid” and would serve Laramie well for some fifty years. The first quarry opened in 1890, its significance later noted by State Geologist W.C. Knight: “Gypsum was first developed in Wyoming 10 to 15 years ago at Red Butte station, on the Union Pacific Railroad, about 9 or 10 miles south of Laramie … the only [place in the state] where the known, gypsum-bearing beds were crossed by a railroad.”
The gypsum at Red Butte is rock gypsum—lithified deposits from Wyoming’s ancient seas. Though hard enough to be called ‘rock’, it’s easily ground into a powder, the first step in processing. This rock gypsum also underlies much of Laramie, but hundreds of feet underground where it causes little trouble.

In the mid 1890s, a more valuable form of gypsum was discovered just south of Laramie, in the Spring Creek drainage. It was gypsite—a crumbly material produced by weathering of rock gypsum, probably by water or wind.

Unlike rock gypsum, the gypsite did not have to be ground, which made plaster production more profitable. “The Laramie gypsite … is as fine as powder, requiring no grinding or even sifting. It is plowed, harrowed and scraped up, calcined [heated to make plaster], and loaded on the [railroad] cars,” reported the Laramie Republican in 1920.
At that time, gypsite plaster manufacturing was one of Laramie’s bigger industries. Two mills produced 310 tons daily, and plaster was shipped to 20 states in the western U.S. But with the discovery of larger deposits elsewhere in the country, Laramie’s gypsite plaster industry came to an end; the last mill closed in 1948. Even so, gypsite is still very much with us.

Two extensive gypsite deposits underlie Laramie (see aerial photo near end of post). One is north of the University, the other in the Spring Creek drainage (site of the old quarry and plaster mill). Sometimes gypsite is visible at the surface, as patches of whitish soil associated with stands of greasewood, a salt-tolerant shrub. More often it’s several feet below ground, out-of-sight. But with enough water, gypsite will reveal itself.

Gypsite is water-soluble, not surprising given its origins. Flowing groundwater easily dissolves gypsite, creating tunnels and chambers—a topography called ‘karst’ (cavers know this word). Well-developed karst can be completely hidden, with no indicators at the surface. But if enough gypsite is dissolved and removed, the ground will collapse to form a sinkhole—like the one containing Stink Lake.

Some claim LaBonte’s basin is an old gypsum quarry, but studies point to gypsite-caused collapse. In 1983, borings were taken from the lake bottom to evaluate stability (a plan was afoot to build an island for picnicking). Six years later, more cores were taken from the lake west to 4th St., to assess hydrocarbon pollution. Both studies showed downwarped strata forming a concave structure, consistent with sinkhole formation. However, aerial photography from 1947 shows what might be a gypsum stockpile just northeast of the pond. Perhaps the sinkhole was enlarged with quarrying. 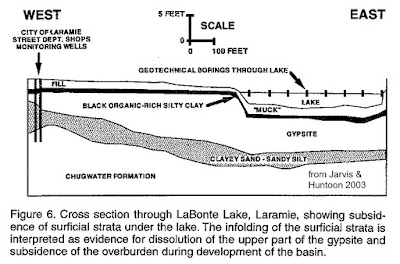 LaBonte is not the only sinkhole in the neighborhood. Early maps and a 1932 aerial photo (see beginning of post) show a second pond to the west. By the 1940s, it was being filled with trash—the city dump. When the dump was moved to its current location, more fill was added. The old pond is now overlain by softball fields and City buildings.

Not all sinkholes in Laramie are as charming as the one that holds LaBonte Lake. More often, they pose significant risk to people and property, especially when they develop abruptly: a cavernous pit that opens in the backyard, a car that breaks through the garage floor overnight, roads and buildings that suddenly collapse when the ground beneath sinks.
Rotting basement foundations, buckled sidewalks, ruptured utility lines, and blistered potholed streets are other signs that devilish gypsite karst lurks below. Problems often grow with investigation. A shovel can reveal cavities 10 feet deep or more, tunnels big enough for a person to crawl through, and dense networks of water-saturated passageways suggesting imminent collapse.


We can’t blame natural groundwater alone for these problems. Often we’re the ones that introduce water to gypsite, for example by watering our yards (tree roots deliver water to karst quite effectively). Stormwater draining off our streets can rapidly enlarge karst features, as can leaking old or inadequate pipes.

Gypsite’s impact on Laramie is significant. For example, in 2008 the City repaired 140 emergency pipeline breaks, whereas the regional annual average was 50 to 80 repairs according to the American Water Works Association. And consider Palmer St.: Since 1988, when record-keeping began, gypsite corrosion of cast iron pipes has caused 15 mainline breaks in just two blocks. The City now requires cast-iron-equivalent PVC pipe in gypsite areas, but does not otherwise factor gypsite into planning.

For more information about Laramie’s gypsite, get the Wyoming State Geological Survey’s 2016 publication, Evaporite Karst Features in the Southern Laramie Basin (free online). Our two gypsite areas are indicated on the aerial photo in Figure 6 (below).
If you haven’t already experienced Laramie’s gypsite dirt and would like to, then explore the Spring Creek floodplain west of 9th St., or drive Bill Nye Ave. west of 15th (gravel). Look for spindly greasewood shrubs and white-crusted dirt. But tread carefully, for karst may lurk just below your feet! Your fate could be similar to that of the Laramie boy who fell off his bike into gypsite mud. He was stuck waist-deep for hours until the fire department finally got him out.

Credit where credit is due

Thanks to former longtime Laramie resident and geologist Dr. Todd Jarvis, who suggested this topic and provided much of the information. Jarvis is a sinkhole sleuth and water folklorist now practicing in Oregon. Thanks also to Foster White of the South of Laramie Water and Sewer District, for sharing his stories about the marvels of gypsite.

[This blog post is a modified version of an article published in the Laramie Boomerang on March 1, 2020. The post includes sources and many more images.]