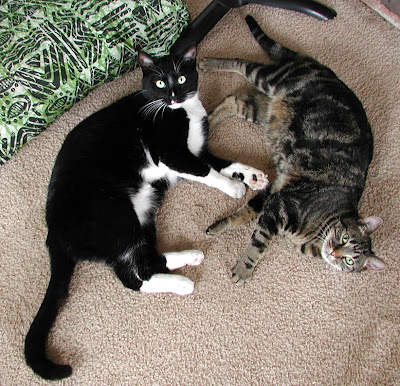 Years ago, I had a pair of feline roomies for about eight months.  Not being a cat person I generally ignored them, but one day I noticed they were nicely arranged on the carpet next to the wood stove.  What was their intent?  At the time I thought it was nothing more than a simple yin/yang posture, but now that I’m familiar with cat tectonics, I realize they were making a bold philosophical statement about continental crust -- that the interplay of creation and destruction maintains a balance overall, contrary to the widely-held opinion that crustal volume has increased with time.  In other words,

[This is my contribution to the June Accretionary Wedge (#57) hosted by Evelyn at Georneys.  The topic is Seeing Geology Everywhere, with a bit of an emphasis on geokittehs.]