This month’s Accretionary Wedge #59 features geologic field guides, a subject near and dear to my heart as I take vacations designed around geo-destinations (botany/ecology too).  Thanks to Mika of GeoMika for hosting and picking such a great topic.

I like destination-based books, especially the Geology Underfoot series.  These are collections of “vignettes” about selected sites, with background and explanations, access info, tour routes, specific things to see, etc.  The geology is pretty basic but always interesting.  I sometimes choose destinations from these guides, and then search for more information before I go.
There are two books about the geology of the western US that I’ve read and referred to again and again:  Frank DeCourten’s The Broken Land and Robert Fillmore’s Geological Evolution of the Colorado Plateau.  Both treat their subjects in depth, and I’ve learned a lot about geology in general from them.  DeCourten’s has a bonus -- intriguing essays introducing each chapter.  What is it that is so exciting about geology?  Why are we drawn to these stories?   Try to imagine visiting these paleo-environments that we’ve managed to reconstruct from rocks!

I recently found another useful guide -- Roadside Geology of Nebraska by Harmon and Maher.  It's a roadside guide, but also has in-depth site-based sections.  I was very happy with it during a recent visit to the Toadstool Rocks.
One of my most memorable geo-vacations was planned with online resources.  I knew very little about northern New Mexico, but hit a gold mine on the web.  The New Mexico Bureau Geology and Mineral Resources maintains a Virtual Geologic Tour of New Mexico with destinations scattered throughout the state.  The virtual guides for the northern part of the state are now available as a book -- Geology of Northern New Mexico’s Parks, Monuments, and Public Lands.
The Utah Geological Survey maintains an equally useful website:  Geosights. 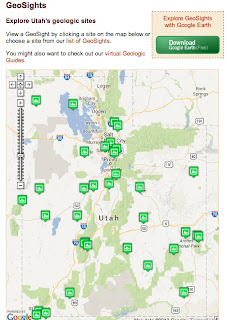 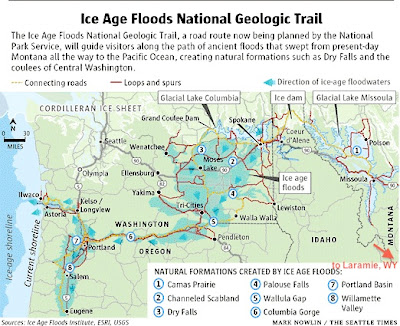 This Accretionary Wedge is timely as a geo-trip is imminent.  A friend needs a ride to Seattle and it seems only logical to get there by way of Glacial Lake Missoula and the paths of its jökulhlaups.  I’m excited to see destruction wrought by cataclysmic ice age floods -- scablands, coulees, giant gravel bars, fluvial dunes, scour holes and more.  Maybe there will be a relevant guide or two among the AW submissions.  Do you have recommendations?
Current reads:  David Alt's book about the humongous Pleistocene floods; John Soennichsen's guide to the scablands; V. R. Baker's "The channeled scabland:  a retrospective" (Ann. Rev. Earth Planet. Sci. 2009.  37:393-411.)

Botanical Dragnet (a letter to the Earth)


About the author:  Punster Extraordinaire John Baxter grew up in Burns, a very small town in the Chalk Bluff country of southeast Wyoming.  He used to tell us there was a statue of him there; I think he was joking but I still haven't checked.  John started his education in the one-room school in Burns (he and his brother were the only pupils one year), and went on to become Professor of Mycology at the University of Wisconsin in Milwaukee.  His other claim to fame was that he was the father-in-law of a Talking Head.

When I met John, he was retired, living in Laramie with wife Jane, and busy with mycology projects at the University.  The state biological inventory where I worked was tucked into a corner of the Solheim Mycological Herbarium ... thus our paths were destined to cross.  We became very fond of John and his wonderful irrepressible sense of humor.  It provided a bit of sunshine to our underfunded under-appreciated existence.

My name is Joe Friday.  I was born in Raceme, Wisconsin.  My buddy Spike and I are just umbel cops, but we can go anywhere a catkin, and we always get our man.

It was warm in Los Angeles.  It was so warm that Spike and I were beginning to drupe, and we were about to go to Abies bar and get plastid, when a call came in that a supermarket had been held up.  We drove down there and talked to a checker.  She was palea and nervous.  “Don’t panicle, Ma’am,” I said, “I just want the FAX.”  “Well, lemma see,” she said, “this guy came in with a pistil, and I knew he meant to stigma up, so I gave him all the cash.  Then I watched him pedicel away on his pericycle.  It had one petal missing.”
I could tell by the style of the caper that it was the work of Pericycle Pete, the notorious supermarket bandit.  We spent a week looking for apetalous pericycle, with no success.  We were deep in glume.  Then one day there was a knock awn the door.  “Come in,” I said, and who should walk in but Sadie the Shoplifter, a gal whose favorite trick was to Caryophyllaceae bit of feminine apparel from some display counter.  “Boys,” said Sadie, “I’ve stolon my last bit of lingerie -- I’m Cereus, I’m going to lead you to Pericycle Pete’s hangout.”

We hoped that Sadie’s change of heartwood mean that she wouldn’t stele anymore.  She took us to Pete’s hideout, a sleazy apartment that he had rented from those notorious slumlords, Phil O. Dendron and his wife, Rhoda Dendron.  “Culm awn out, Pete,” I yelled, “You ought to see the nice nucellus fellows have for you.  Yew won’t pine away -- yew’ll spruce up fir a change when you cedar cell.”

His only anther was to fire a pistil from a window.  We let him rachis with fire for awhile, then we broke down the door.  He had exhausted his ammunition, and the floor was littered with Brassicaceaes. “Boys” he said, “I’m glad it’s over. I lost my shoes, and mitosis cold.”
Sadie warned us that the sapwood try to escape, so we took him to the station and locked him up in a guard cell.  We put Sadie in a nearby companion cell.  Later she cracked up, so we sent her to the insane xylem.  Then our Irish police chief, Luke O’Plast, gave me a raise so now I have a funiculus to jingle in my pocket.  I also have my name over my office door inflorescence lights, and I feel quite superior ovary the whole thing. -- Ament

Email ThisBlogThis!Share to TwitterShare to FacebookShare to Pinterest
Labels: botany humor, letter to the Earth 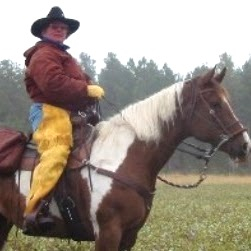 Our colleague and friend Helen McGranahan passed away last weekend ... while gardening.  We console ourselves -- “better to go quickly doing what we love, than to slowly waste away in some institution” -- but it’s hard not to feel terrible about it.  This was a neat person who was excited about life, interested in many cool things, and off on new adventures after a career in resource management with Federal agencies.  As Helen put it, she was “a recovering Tri-Fed Confirmed Wing-nut.”

This “lifelong plant enthusiast” spent her “formative years" and many more on her family’s farm in north central Oregon.  She moved to South Dakota in 2002, becoming a perennial seasonal botanist with Black Hills National Forest.  In 2011 and 2012, Helen was part of the Forest's contribution to my study of Black Hills montane grasslands.  With her background in range management, she provided expertise I lacked, common sense in general, and a wonderfully wacky sense of humor that meshed well with my own.  We worked hard and had a lot of fun.
During the grassland project, I learned that Helen loved to write.  At that time she was with Suite 101, writing about cooking, gardening, juniper invasion, pollination, working dogs, wildflowers and more.  My Plants and Rocks blog was maturing, and we talked a lot about writing online.  About four months ago Helen switched to blogging, and The Moderate Botanist was born.

“Is there really such a thing as a moderate botanist?”  This is such a pertinent question here in America’s Heartland, where botanists, wildlife biologists and the like often are considered environmental whackos of the Far Left.  This can be intimidating.  Sometimes when folks ask me “what do you do for a living?” I think of Ray Steven’s wonderful Haircut Song and am tempted to give the same answer myself ... “I’m a logger.”

“In the current, deeply divided political climate it seems that people can easily be assigned to one of two major camps just because of what they do for a living.  Botanists, archaeologists, and wildlife biologists tend to get thrown into the wacko-liberal-terrorist-camp (a.k.a. blockers), while other natural resource professionals such as foresters, range cons, geologists, loggers, miners and others who make their livings from resource extraction are the sane, level-headed stewards of the land.  However, after a career in natural resource management I can attest that there are plenty of moderate botanists, archaeologists, and wildlife biologists in the world.  I am one of them.”

So am I.  Likewise, I share Helen’s message to all “screaming liberals and confirmed conservatives” --


“You're not only controlling the lives of moderates, but boring us stiff too!  Get your acts together before it's too late!”


You can read more about Helen in Frank Carroll’s tribute in the Rapid City Journal:  The Hills were her garden.