After my total eclipse experience, I stayed to explore the empty country of central Wyoming, first visiting Castle Gardens at the suggestion of a friend. She had warned me: “There’s no castle and no gardens!” But in fact I found castles galore, with interesting elegant gardens, though a bit sparse. It was a pleasure to stroll, clamber, and slide back down through them.

“… the jagged edges of an eroded anticline are projected sharply above the surrounding plain … the wind has carved many of these vividly colored sandstone rocks into fantastic shapes and the landscape is dotted here and there with green pines, cedars and berry bushes, the effect is of some medieval castles surrounded by quaint gardens—hence the name Castle Gardens.” Dave Love (1) 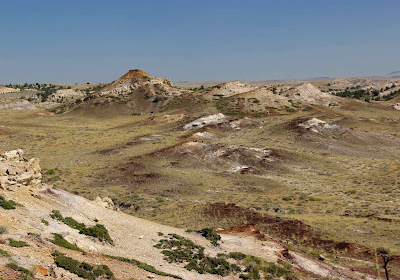 After driving many miles on gravel roads through dry rolling “empty” country, I headed east on a rough dirt road through the “eroded anticline” that Dave Love described 85 years ago. Tilted rock layers formed multiple low ridges. The steep pale sandstone faces were fairly soft, but they were capped with resistant rock that has protected them from obliteration by erosion. But only for awhile. Eventually the protective caps will be undercut and fall away, and erosion will proceed apace.

I could see large roughly-circular patches of green scattered across the barren slopes. That’s one hardy plant, I thought, growing so vigorously where nothing else can. But what is it? I was intrigued. I hiked up a slope to check, and found a familiar shrub—common juniper! What a surprise to see it in such dry, harsh, unforgiving habitat.

But this was only a surprise because of my perspective. I’ve seen lots of common juniper—for example in ponderosa pine forests in the Black Hills, limber and in lodgepole forests in the Laramie Mountains, and on subalpine and even alpine sites in the Medicine Bow Mountains. But I now know that common juniper must have arrived on those sites before the trees, perhaps after fire or logging or some other disturbance. For its seedlings are intolerant of shade and competition.

Common juniper generally requires open habitat to become established. It “reaches maximum abundance on harsh, stressed environments in which competition is lacking” (source). The Castle Gardens area certainly qualifies. I suspect these junipers are doing well in part because they tap into water that accumulates in fractured rocks below the surface, produced by the tilting mentioned above. I've seen this elsewhere (e.g., here).

True to its name(s), common juniper (Juniperus communis) is common; in fact it's said to have “the largest geographic range of any woody plant” (source), growing throughout the northern hemisphere in cool temperate areas. In the American West we know it as a shrub, but in the northeastern USA it occasionally reaches tree size, and trees are common in Europe. This isn't just a change in size, but also architecture, with one or a few stems becoming dominant.
Juniper “berries” are actually cones—like tiny pine cones but with fleshy scales (you can geek out on definitions here). Berries of the common juniper are used to flavor gin. They take several years to mature, becoming blue-purple. 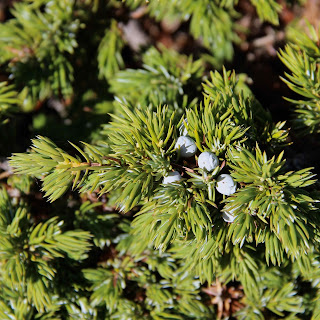 While many of the steep sandstone slopes were nicely sculpted, none really qualified as a castle. To see castles I continued east on the dirt road to the Castle Gardens Petroglyph Site, managed by the Bureau of Land Management (2). Amazingly there are two Castle Gardens in Wyoming. The other is near Tensleep.

The gardens among the castles were dominated by limber pine (Pinus flexilis), juniper (probably Juniperus osteosperma), and of course common juniper. 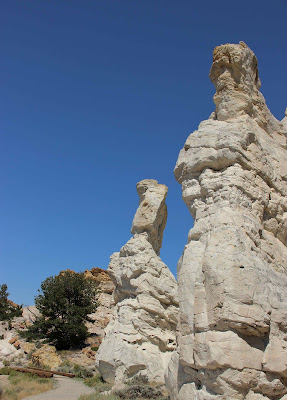 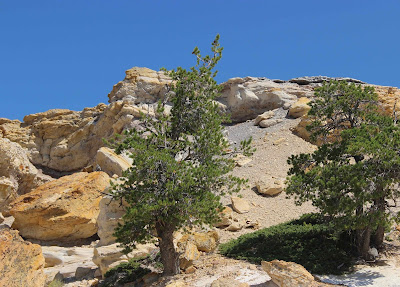 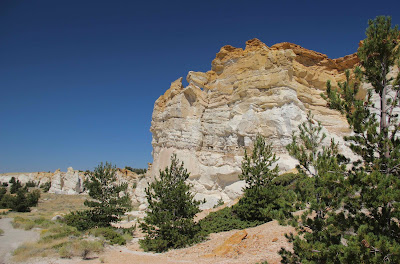 Contrary to its name, there is an uncommonness to common juniper. It's the only juniper in North America with needles; the others have scales. But if you’re familiar with any of the scale-leaved junipers, you’ve probably seen needles on the seedlings and young growth. It's thought that common juniper has needles because it never makes the transition to mature scales. In other words, common juniper never grows up.

But I wonder if that’s really the case. The needles of common juniper (and the two other species in sect. Juniperus subsect. Juniperus) differ from the immature needles of scale-leaved junipers in that there’s a joint where they attach to the stem. In scale-leaved junipers, needles transition smoothly (photo below). Is this significant? I don't know; my online searching was fruitless. But that’s okay—I’m happy that Nature provides such interesting things to ponder.😀

(1) Castle Gardens used to be part of the Love Ranch, where legendary Wyoming geologist J. David Love was born and raised (featured in John McPhee’s Rising from the Plains). In 1931, while an undergraduate at the University of Wyoming, he described the site to archeologists, served as guide during survey, and provided information for their report (Renaud 1936).

(2) Vandalism of Castle Garden petroglyphs has been horrendous. It’s sad to compare today’s situation with early descriptions and photos. But the site is still worth a visit; the artwork is wonderful, and trails and fences have been built recently to protect the petroglyphs. A post about them will appear here next week.

In the late 1970s, I worked as a ranger naturalist at Devils Tower National Monument in northeast Wyoming. During my stints at the desk in the Visitor Center, I heard the Admatic Automatic Slide Projector’s short program about the Tower over and over. One phrase is especially memorable: “phonolite porphyry, named for the ringing sound the rock makes makes when struck.”

I thought it would be fun to demonstrate this for visitors, but I was never able to produce a ringing sound by striking the Tower rock. Interestingly, the Park Service now says that “phonolite (fō'nə-līt') refers to the mineral composition of the rock.” However “porphyry” hasn't changed; it still refers to rock texture—visible crystals (in this case feldspar) in a fine-grained matrix.
Phonolite is an uncommon rock—“exotic and enigmatic.” Yet I encountered it again just recently, in the Rattlesnake Hills of central Wyoming only 175 miles southwest of Devils Tower. In both places the phonolite is estimated to be about 40 million years old, emplaced during the Eocene Epoch. 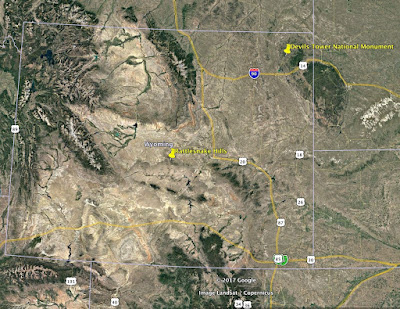 Phonolite is igneous—formed from magma. It’s often referred to as volcanic (e.g., here and here), which means it's extrusive—magma reached the surface. And yet the Devils Tower and Rattlesnake Hills phonolite bodies are considered intrusions that formed below the surface, though probably not deep. The phonolite in the Rattlesnake Hills has been called “subvolcanic.”

Devils Tower is just one of a collection of igneous intrusions of Eocene age in the northern Black Hills. Rock types include members of the phonolite-trachyte-latite series. They probably were emplaced late in the uplift of the Hills (part of the Laramide Orogeny, the building of the Rocky Mountains). The intrusions were later exposed by erosion, and now form prominent landscape features: Devils Tower, the Little Missouri Buttes, Sundance Mountain, Inyan Kara Mountain, Crow Peak, and more.
During cooling and contraction of the intruded magma, columnar jointing sometimes formed. As Evelyn Mervine has said, “Columnar jointing is always a joy to observe in rocks in the field. Stumbling upon perfectly geometric columns of rock can only be described as magical.”

Many northern Black Hills intrusions include columnar jointing, but never as extensively and dramatically as at Devils Tower—not even close! There the columns are as much as six feet across and 600 feet tall.

Like the Black Hills, the Rattlesnake Hills were created during the Laramide Orogeny. They also include Eocene igneous intrusions. Composition is similar to those of the Black Hills, but phonolite is more common, found in 21 intrusions in the central core of the range (Hoch and Frost 1993). Columnar jointing occurs here too.

The same rare rocks of about the same age in close proximity demands an explanation! Are Black Hills and Rattlesnake Hills intrusions related? Sadly, it appears no one knows. Their origins are “poorly understood” and the phonolite remains enigmatic. Hoch and Frost (1993) think that Laramide structural features (faults, fractures) “enabled the alkaline and subalkaline magmas to ascend to shallow crustal levels.” But why would there be exotic magmas here?

Geochemical analyses indicated that the magmas must have involved some mixing. But Archean country rocks of the Wyoming craton—our several-billion-year-old basement rocks—are poorly represented in the mix. Hoch and Frost wrote that the magma “may reflect the composition of subcontinental mantle that has been isolated and chemically modified during the last 3.5 billion years.”

In other words, magma made from deep 3.5-billion-year-old rocks moved up through fractures 40 million years ago, and solidified before reaching the surface. Then starting around five million years ago, erosion carried away the overlying softer rocks, revealing the intrusions. If correct, this will be a really cool story! But more work needs to be done. The phonolites are not eager to give up their secrets.

Tree of the Month: my old friend the Pussy Willow

Sad to say, summer is ending. The days are cooler and shorter. The remaining wildflowers are late-bloomers of the sunflower family—gumweed, asters, rabbitbrush, snakeweed and sagebrush. And all of our deciduous trees have at least a few yellow leaves; in fact some have a lot. Cottonwood leaves litter my yard even though five weeks remain until University students show up to rake them—on that wonderful day of public service that accompanies Homecoming! Last year the leaves were late in falling; this year, the volunteer rakers will stay busy all morning.

In honor of the monthly gathering of tree-followers, I checked on an old friend to see how he was faring with the changing seasons—the American pussy willow I followed in 2015. (I’m not totally anthropomorphizing. Salix discolor is dioecious and this tree is male.) One big change was visible right away—signs and barriers. The open space east of town has long been “closed” to motorized vehicles, but enforcement wasn’t feasible. These recently-installed deterrents seem to be doing the job.

The eponymous willow of Willow Canyon was looking great, with a full green canopy—maybe because we had lots of early-season moisture. Here are views of the top of the tree from the canyon rim. I estimate it to be about 15 feet tall. 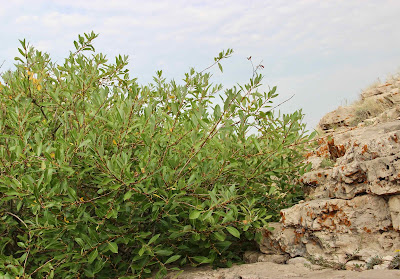 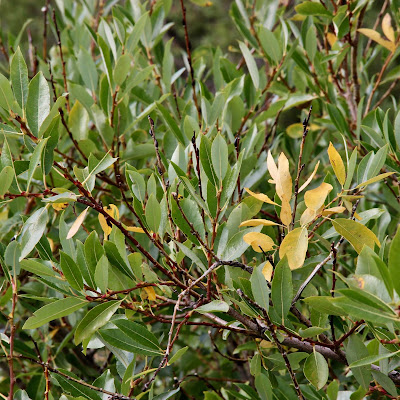 Scattered yellow leaves verified that summer is indeed coming to an end. But I also found signs of spring!—abundant bright red buds. From these, pussy feet will emerge in late winter (I cut a few open to be sure). By then, the bud scales will have turned black. 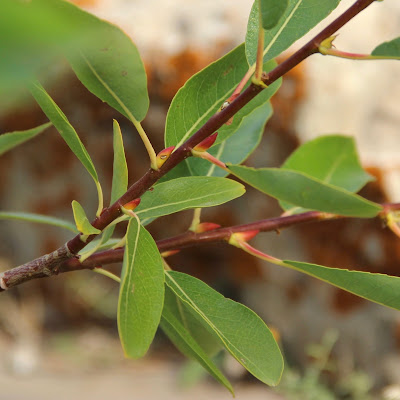 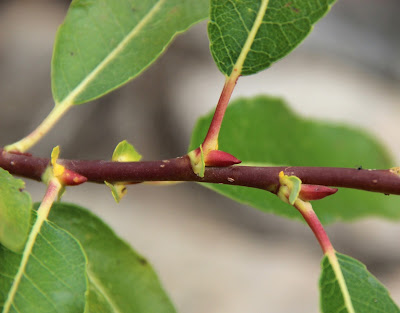 From the head of the canyon, a rough trail leads down to the limestone alcove where the willow grows, below a jump that becomes a waterfall after heavy rain. The tree is well shaded—and almost hidden—by junipers. 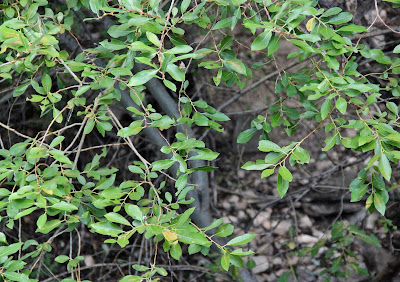 I entered the alcove as carefully and quietly as I could. But all the elves, fairies, sprites and pixies that surely live there must have heard me coming. I saw none … though I think I heard rustling as they scurried away. 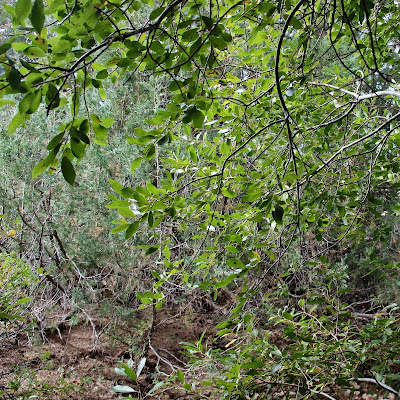 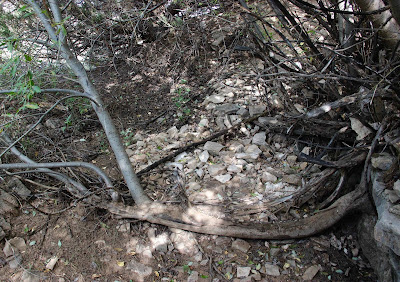 Years ago, a seed germinated and a young plant managed to survive in a limestone crevice. Now a large willow grows in this dry rocky little canyon, largely hidden from view. That's magical!