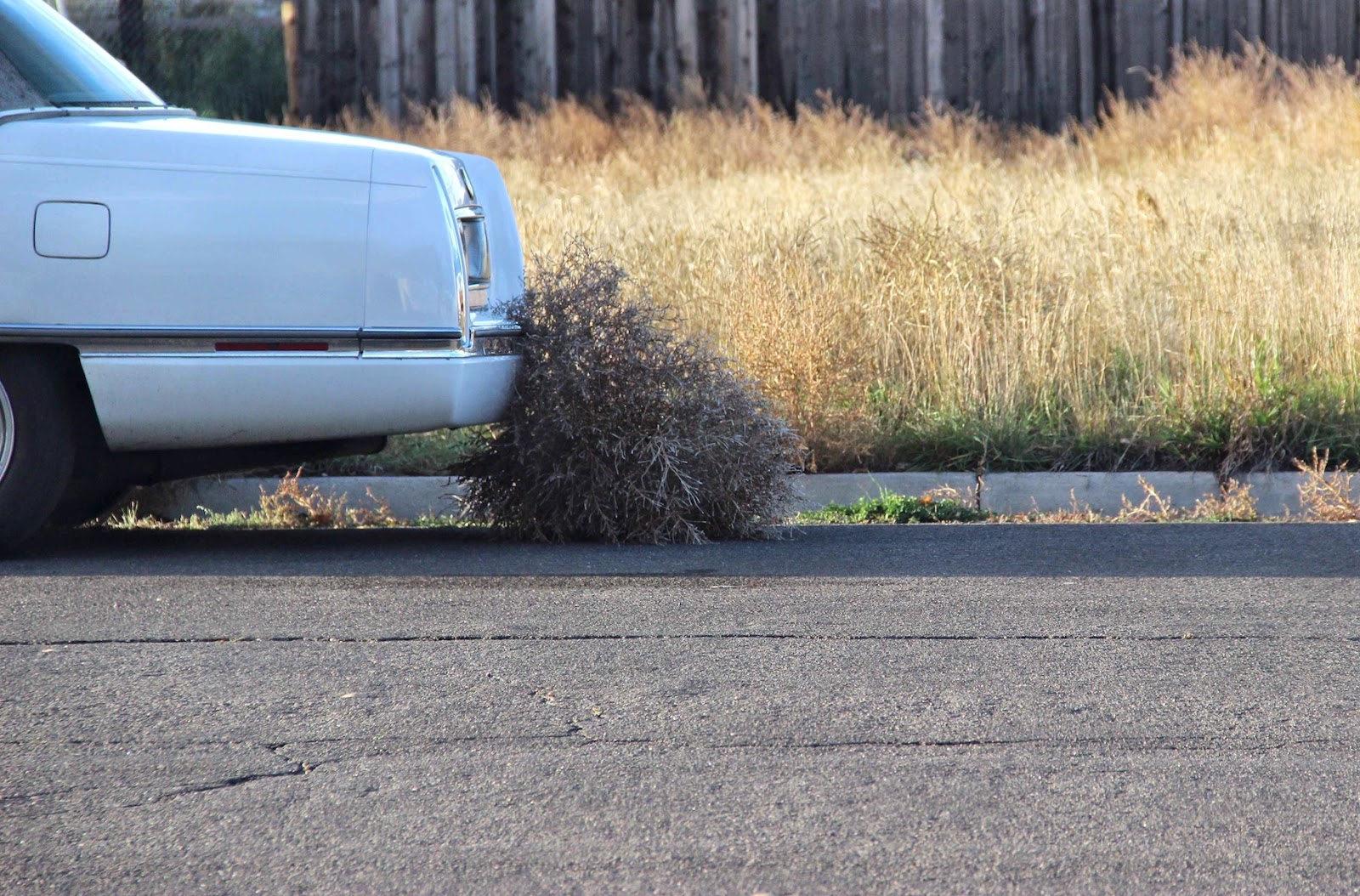 Tumbleweeds are integral to our beloved American West -- a land of wide open spaces where tumbleweeds, cowboys and other free spirits can go wherever the wind takes them.  They symbolize the revered rugged individualist -- loyal only to his own personal code.


Lonely but free I'll be found ... drifting along with the tumbling tumbleweeds.

But truth be known -- tumbleweeds are foreigners.  They snuck in from Eurasia, probably in the 1800s in “contaminated” feed.  And contrary to Western myth, they do just fine within the confines of town.  So when Lucy Corrander offered to host a virtual Street Plants gathering, urban tumbleweeds came to mind.
The “tumble” in their name comes from what they do.  These are traveling plants.  After they die and dry out each fall (being annuals), they break loose and tumble along, blown by the wind.  Seeds fall out along the way, or wherever the tumbleweeds land -- lodged against fences, under cars, or in trees. 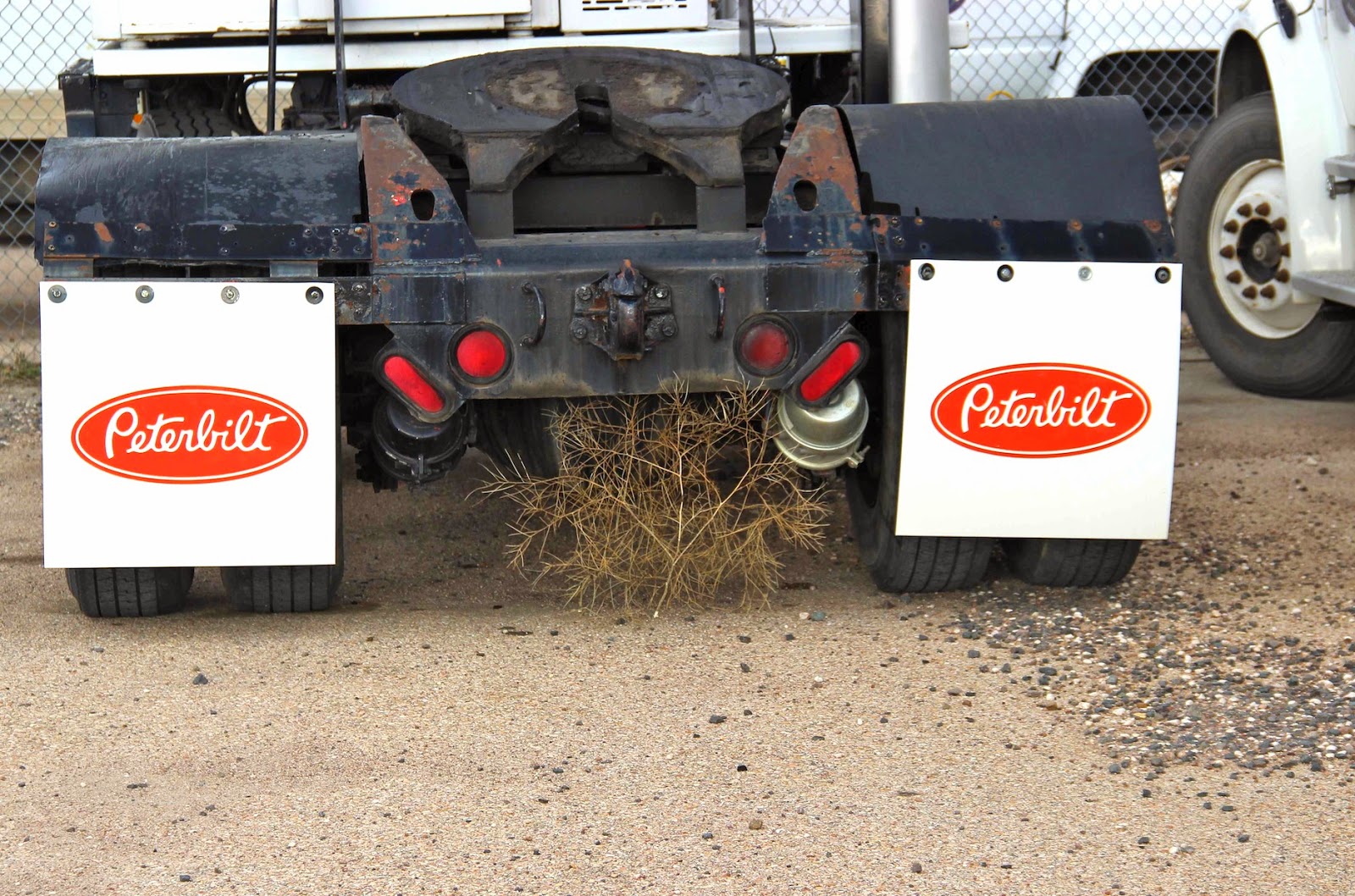 The “weed” part of their name means they’re unwelcome.  That's due largely to their fecundity, which is astonishing (more below).  The results can be overwhelming ... as when unwelcome tumbleweeds invaded Clovis, New Mexico.  Neither man nor machine could handle the unruly plants.

Based on yearly inventories of my hedge, trees and fences, three species of tumbleweed inhabit our neighborhood.  Most common by far is kochia or summer cypress (Kochia scoparia).  Mature plants range from a single short stem to robust branching individuals up to six feet tall.  In a good year, a large plant may produce 50,000 seeds; the average is 14,600 (source).  And that’s a relatively small tumbleweed family! (more below).

Russian thistle (Salsola kali, S. tragus or Kali tragus) is the “tumbleweed” of Western legend, though in our neighborhood it’s not even half as common as kochia.  Mature plants may be up to five feet in diameter, and are oval to round -- made to roll.
Like kochia, Russian thistle scatters seeds as it tumbles along.  But the winged seeds can travel with the wind too, independent of their parents.  The reproductive output of this tumbleweed is massive -- a "typical" plant sows 250,000 seeds (source).

See them tumbling down ... pledging their love to the ground

The small leaves of Russian thistle are sharp-tipped when young, get even sharper with age (above), and become hard and penetrating when dry.  Lambs get mouth sores if they eat dried tumbleweeds, and cowboys wear leather gloves to clean them from fences.


Tumble mustard (Erysimum altissimum) is the least common and least familiar of our tumbleweeds, but look around and you’ll always find some.  In fact, my yard inventories show it to be almost as common as Russian thistle.  Plants are similar to Russian thistle in size but are even more fecund -- a single plant is said to produce up to 1.5 million seeds -- unbelievable!  Tumble mustard has several adaptations not found in the other tumbleweeds. Their pods shatter slowly, so seeds are scattered farther afield as the plant tumbles.  Kochia and Russian thistle seeds don’t survive more than a year, but tumble mustard can generate sizable seedbanks lasting 40 years or more (source).

In the photo below, all three tumbleweeds line up side-by-side, with many more behind. Soon they'll break loose and roam ... drifting east with the wind.

I'm a roaming cowboy riding all day long ... tumbleweeds around me sing their lonely song.  Nights underneath the prairie moon ... I ride along and sing this tune:

Shear Beauty along the Highway

Wyoming Highway 130 crosses the Medicine Bow Mountains west of Laramie.  North of the highway immediately beyond the turnoff to Brooklyn Lake are low dull-brown slopes that I’ve ignored for 30+ years.  Foolish me. 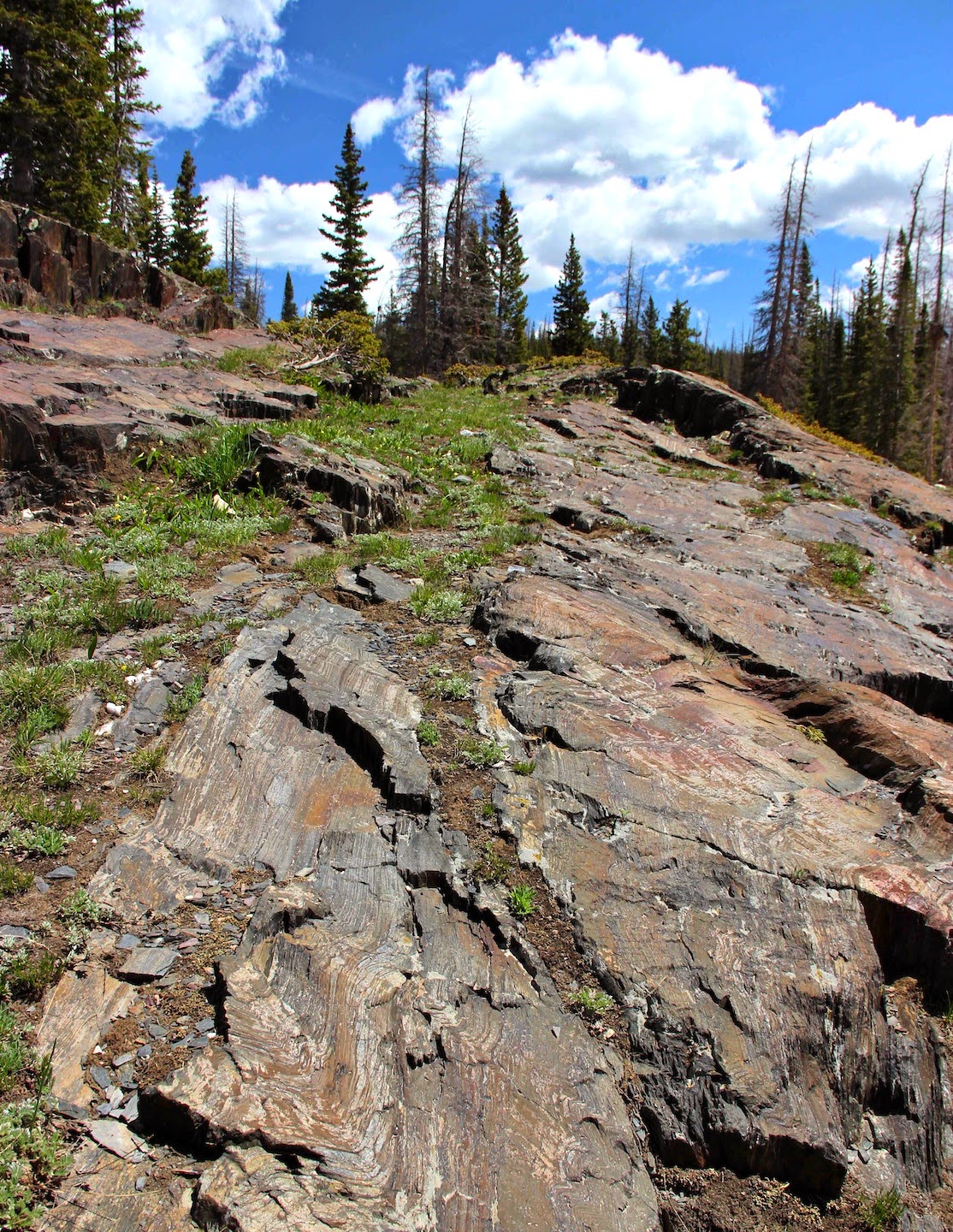 On the "dull" brown slopes are glacially-polished slate outcrops with fine multi-colored folds. The outcrops aren't extensive, but the patterns and colors are so intriguing that I stayed almost an hour looking at rocks and plants. 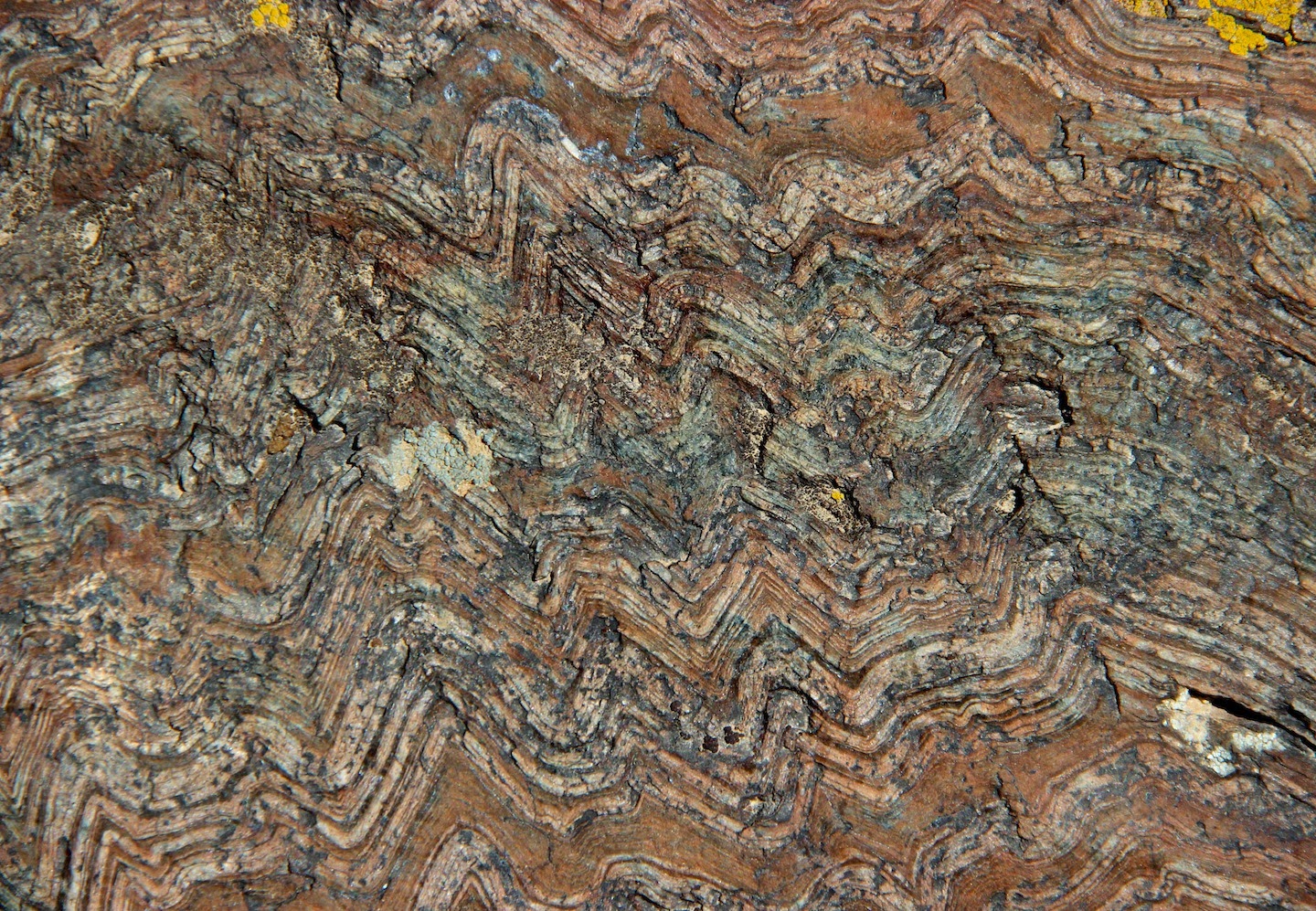 This is the French slate, exposed in the Mullen Creek - Nash Fork shear zone -- part of the Cheyenne Belt, a dramatic geologic structure that crosses southern Wyoming.  Rocks south of the Belt are Proterozoic (really old, 1.72 to 1.75 billion years); those to the north are Archean (really really old, two billion years or more).  Roughly 1.7 billion years ago, oceanic arc terranes collided with Wyoming along what was then the southern coast of North America, creating “the best agreed upon suture zone in the Precambrian of the western United States” (Whitmeyer and Karlstrom 2011).  The French slate was caught up in the mayhem and beautifully folded.
The deformed slate seemed quite durable.  I couldn’t find any small fragments to take home, and cracks and soil pockets for plants were few. 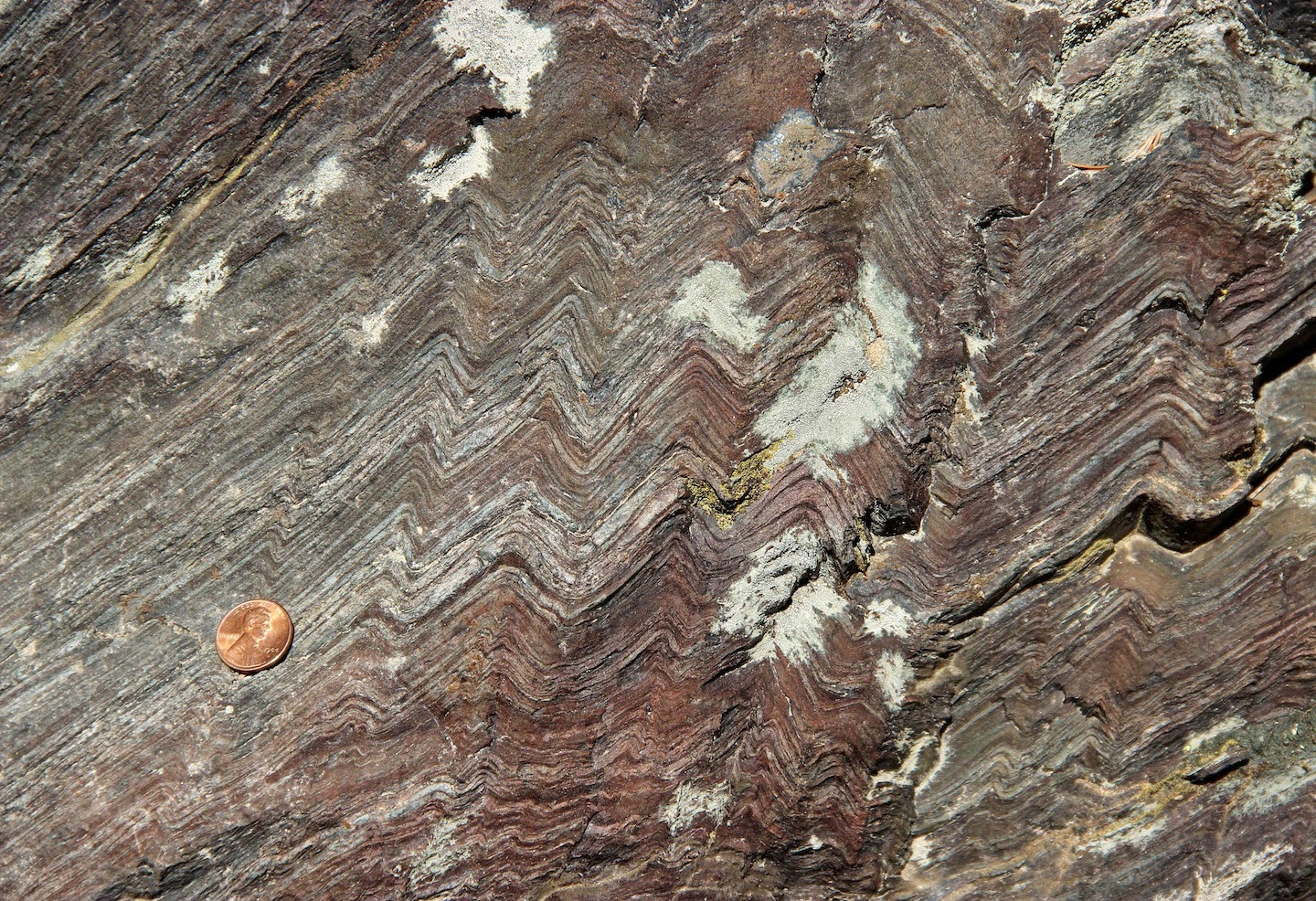 The French slate is thought to have started as fine sediments deposited in deep ocean waters off the southern coast of North America (Lanthier 1979).  Then along came the colliding oceanic arc terranes, and the ocean was squeezed out of existence.  We say "collision" but it was hardly a single dramatic event.  Whitmeyer and Karlstrom estimate it took place 1.76 to 1.72 billion years ago -- a period of 40 million years.

It's so hard to grasp geologic time at these scales!  The quartzite boulder below is much easier.  It's an erratic left by a glacier 12-16 thousand years ago -- just recently.  The glacier also polished the folded French slate, a nice touch.

How to get there
From Wyoming Highway 130 roughly 7.5 miles northwest of Centennial, turn north (right) on the road to Brooklyn Lake.  Almost immediately turn left into the Nash Fork Campground if it’s open (recently it hasn't been) or park nearby.  From the bulletin board/restroom area near the entrance, walk 20 to 30 yards west to the brown outcrops just above the highway.  The folds are obvious.

“Selfie” was the Oxford Dictionaries Word of the Year in 2013:


selfie noun, informal (also selfy; plural selfies):  a photograph that one has taken of oneself, typically one taken with a smartphone or webcam and uploaded to a social media website

Did you know that animals other than humans take selfies?  They trigger cam traps and then a human uploads them to social media.  My current favorites feature pygmy rabbits (above) and their neighbors (like the young coyote below), posted by randomtruth at nature of a man.  It’s wonderful to see these guys going about their daily business unperturbed by us.
As a botanist, I’m envious.  Few plants move enough to justify cam traps.  I thought it would be interesting and fun to help wildflowers take selfies.  But results were mixed.

I started in the backyard, where I could figure out logistics without anybody staring.
I put the iPad mini in selfie mode.  Plants can’t use a touch pad as leaves don’t conduct nearly as well as fingers, so I triggered the camera for them.  Rarely were both flowers and photographer in the frame and in focus, so I gave up on that approach.  I just pointed the screen at the plants, pushed the button from the side, and hoped for the best.

It’s been fall here for awhile.  Some days are warm, some are cool, leaves are turning color (there was a frost two weeks ago), and late-season wildflowers are in bloom.  Most are yellow and members of the aster family (Asteraceae) ... but not all.  Let’s have a look.

I walked through the light-industrial/riparian ecotone west of my house, and then along the path by the Laramie River.  Many late-season plants were in bloom and fruit. 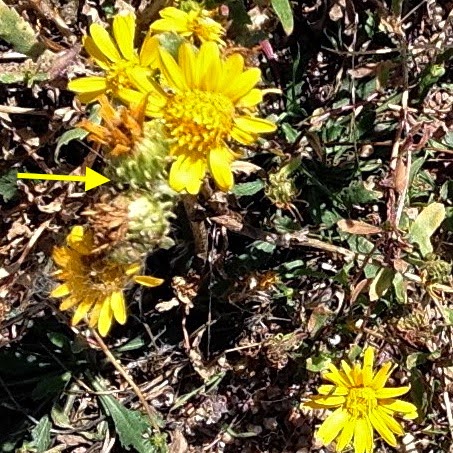 Families other than Asteraceae were occasionally represented.
What’s this?! 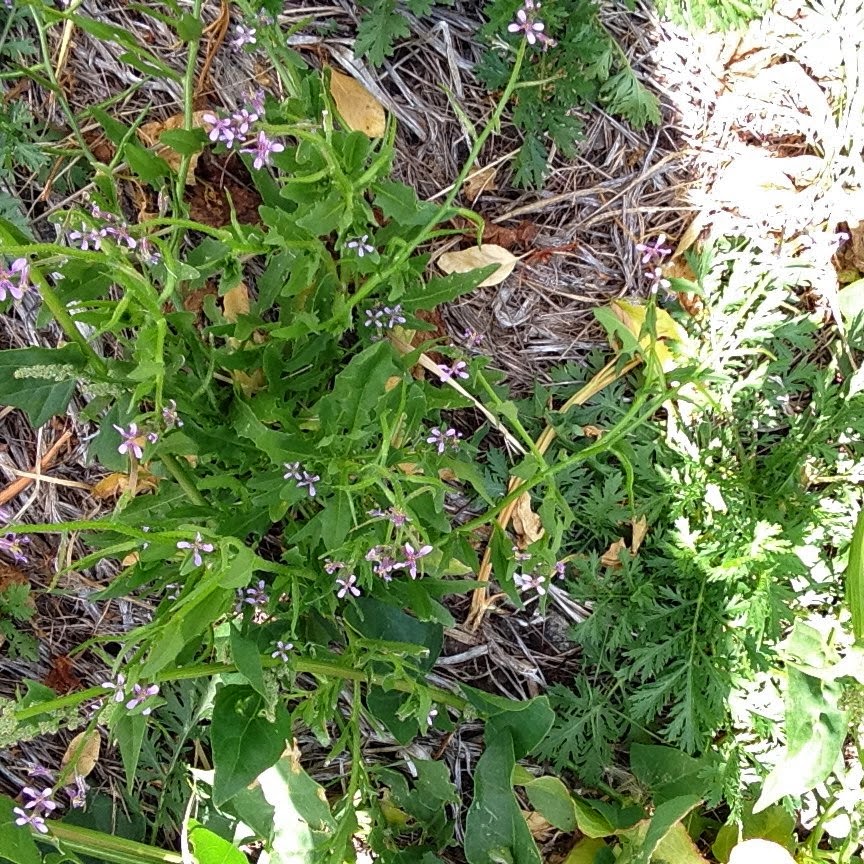 It’s purple mustard, Chorispora tenella.  This is one of the first plants to bloom in the spring, then it dries up and disappears.  Apparently it occasionally blooms late in the season too.  The things we learn when we look close!
“We” took many many photos.  It was very much trial-and-error, mainly because I couldn’t see what was framed.  Eventually my aim improved, so much so that the photos degenerated into simple compositions with none of the charm of selfies.

Wikipedia says selfies “are usually flattering and made to appear casual.”  I’m no expert, but I would add that perspective is somewhat odd.  Also, the composition is often unexpected and, when we’re lucky, whimsical -- like the earlier coyote legs and nose.  I adjusted accordingly. 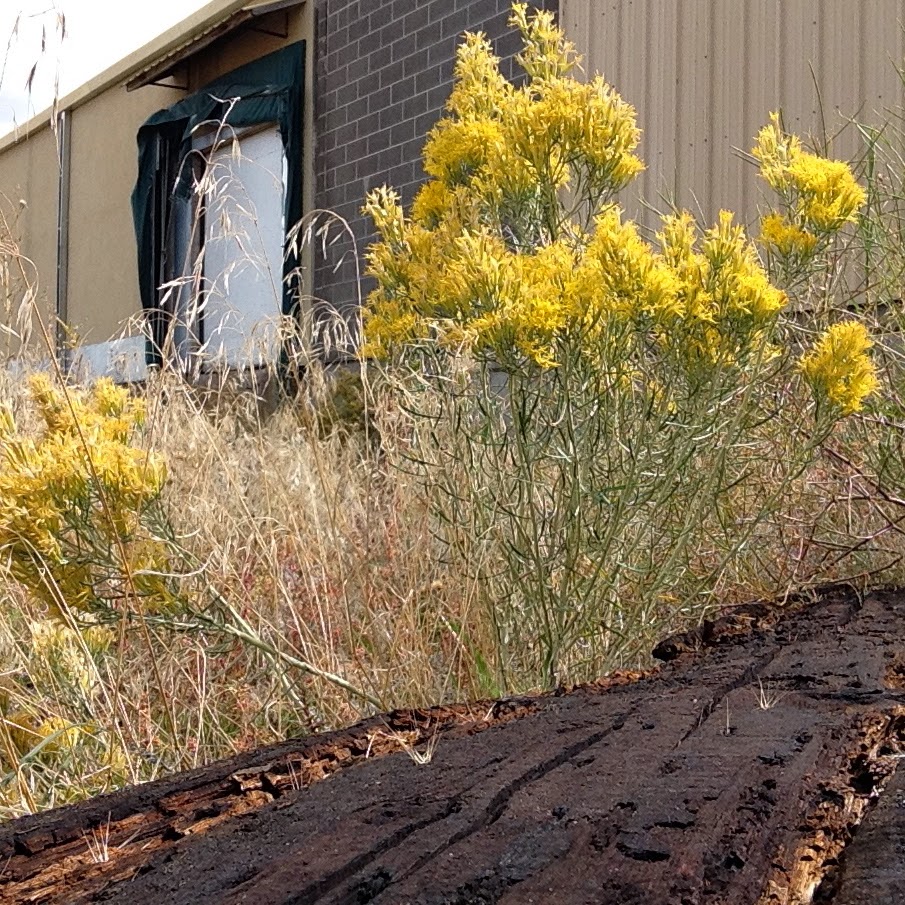 Of course these aren’t true selfies.  But I couldn’t resist poking a little fun at this extremely popular and most curious phenomenon.  What drives our selfie-ing?  All kinds of things it seems to me:  narcissism, whimsy, social nature, hope ... for acceptance or immortality, desire to hang onto good times, or maybe just the need for a good chuckle. 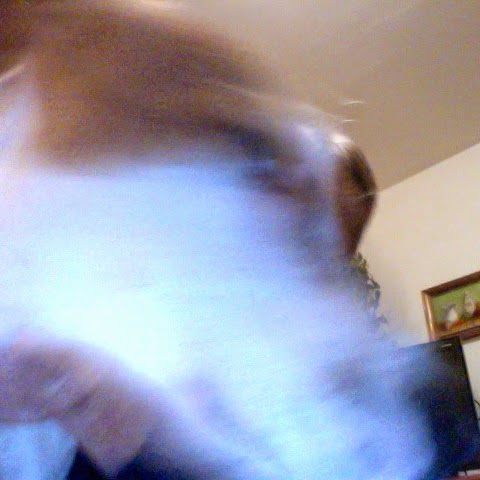 These are Emmie’s first selfies, taken with Photo Booth on a MacBook Pro, and random steps on the keyboard. 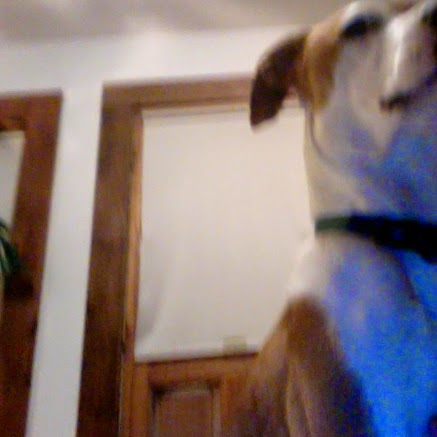 Even though Emmie triggered the camera herself, she probably didn’t “make a creative contribution to the work” so she can’t copyright the photos.  But this is a moot point because Emmie isn’t human.  So if you want to use her photos, feel free.  For more explanation, see this article about copyrighting selfies.

Emmie is the newest addition to the Plants and Rocks team.  She loves plants and rocks and everything else.  Black Dog Animal Rescue advertised her as a comedian and entertainer ... and they were right!  She plays with athleticism, enthusiasm and whimsy -- speeds away, leaps in the air, turns so sharply she almost loses her footing, comes flying back, passes me just out of reach, soooo happy.  Then she takes off again ... and again ...  And when I point a camera at her, she poses!  So selfies are understandable ;-)