Shultz’s milkvetch (Astragalus shultziorum) grows in abundance on calcareous scree and rock outcrops in the Salt River Range (above), but overall it's rare.  It's restricted to several mountain ranges in western Wyoming and adjacent Idaho, and specifically to sites underlain by limestone or dolomite (images courtesy WYNDD).

In Wyoming, we have at least twenty species like Shultz's milkvetch -- restricted to limestone or dolomite.  Why?  What’s different about these plants?  This is the “limestone question" which has intrigued and puzzled botanists for more than 200 years. We call these species calciphiles or limestone lovers, though we really don’t know what we’re talking about (more on that later).  They’re endemics, meaning restricted to a limited area, and they're edaphic endemics as they occur only on specific soil/rock types.  Calciphiles are edaphic endemics that grow only on calcareous sites ... or so it appears.

It’s impossible to be a rare plant botanist in Wyoming and not be enchanted by our calciphilic plants.  They're often found in spectacular places, and the association with specific rock types is fascinating.
In the photo above, Dorn’s twinpod (Physaria dornii) grows on gravelly slopes of Twin Creek limestone with mountain mahogany.  This twinpod is a narrow endemic limited to a few areas in central west and southwest Wyoming.  In the northern part of its range it grows on limestone soils.  Further south it does just fine on sandy-shale soils.  Are these genetically-distinct ecotypes?

Below, Cary’s beardtongue is one of the half dozen or so calciphilic endemics of the Bighorn Mountains, where there's lots of limestone and dolomite.
Why are we blessed with so many calciphiles?  It’s because limestone and dolomite are exposed in most mountain ranges in the state.  During much of the Paleozoic Era 570 to 245 million years ago, Wyoming was underwater.  Sand, silt and most importantly, carbonate sediments were deposited on the sea floor.  Time passed, the sediments were buried and turned to rock, and then starting about 70 million years ago, mountains were uplifted and erosion exposed outcrops of calcareous rock. 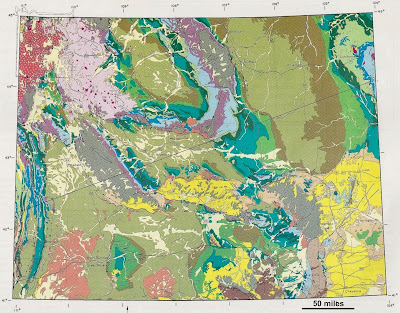 Above, simplified geologic map of Wyoming.  Purple and pale blue areas include exposures of Paleozoic limestone and dolomite.  Below, cross-section through Wyoming mountain ranges;  Paleozoic rocks are pale blue.  Click on images to view details; both are from Roberts 1989. 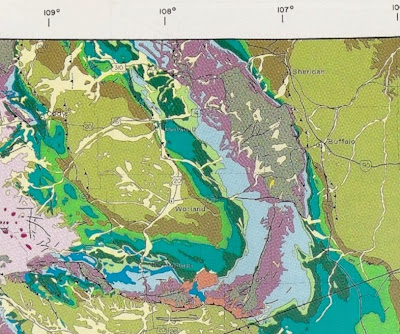 The map above shows the surface geology of the Bighorn Mountains in north central Wyoming.  The purple and light blue polygons include extensive exposures of limestone and dolomite.  Below, distribution of three endemic plant species reflects distribution of calcareous rock outcrops and soils.
The limestone question pops up in many parts of the world.  It's been studied extensively in Europe, starting with botanist and plant physiologist Franz Unger.  In 1836 he published a paper contrasting the distinctive floras of limestone vs. slate regions in the Alps:  Über den Einfluß des Bodens auf die Verteilung der Gewächse (On the influence of soil on the distribution of plants).  Unger viewed the mineral composition of the rock as the main determinant of substrate-specific plant distribution, sometimes called the Chemical Soil Theory.
Limestone areas often are rich in endemic plant species.  For example, in the central eastern USA, cedar glades develop in areas of shallow rocky calcareous soils and exposed bedrock (above).  The flora of these glades includes 41 endemic species! (Kruckeberg 2002).

At least a dozen calciphilic plants are known to be endemic to Mount Olympus, Greece (Kruckeberg 2002).
The Burren in County Clare, Ireland, is one of my dream destinations.  It’s famous for its amazing flora, including many limestone-lovers.


After studying the limestone question for 200 years, what have we learned?  It’s complicated!  Just look at the terminology:

basiphile vs. acidophile -- plants adapted to basic vs. acidic soils.  For a long time it was assumed that the differing pH of soils derived from calcareous rocks (slightly basic) vs. silicic rocks (slightly acidic) explained plant distributions.  It turned out to be not so simple ... in fact not even close.

calphile vs. calciphobe -- plants requiring (loving) vs. unable to grow on (fearing) calcareous substrates.  This too is an oversimplification.  Many limestone lovers will grow just fine on non-calcareous soil if there’s no competition.  Apparently in the wild they’re restricted to limestone because the competition can’t grow there.

calcicole vs. calcifuge -- plants that grow vs. do not grow in calcareous habitat in the wild.  This non-committal approach is good because for most species we have no answer to the limestone question.  But we’re not totally ignorant ... we’ve learned that plants deal with the challenges of limestone and dolomite in diverse ways.

Limestone is mainly calcium carbonate; so is dolomite, but with magnesium mixed in.  It’s not surprising then that one problem with calcareous habitat is too much calcium.  Plants need calcium but an overabundance disrupts critical processes.  Several strategies for dealing with excess calcium are known.  Some plants are able to maintain high concentrations of bound calcium in their sap without altering the concentration inside cells.  These are calciotrophic calcicoles.  There also are calciophobic calcicoles which precipitate out excess calcium and store it.  Other plants secrete calcium carbonate via glands.  The table below shows plant families in which some species are calcicoles, with strategies.
It may be that some plants tolerate limestone with the help of microbes or mycorrhizal fungi associated with their roots.  Finally, a plant’s apparent love of limestone may have nothing to do with calcium.  White and Broadley (2003) suggest that it is “insensitivity to iron and phosphorous deficiencies that determines the flora of calcareous soils.”  And so the debate rages.


Though we're blessed with many calcicoles in Wyoming, the limestone question -- why and how they grow where they do -- has not been answered for any as far as I know.  And so we arrive back where we began -- fascinated and puzzled, and hopefully a bit wiser for the journey. 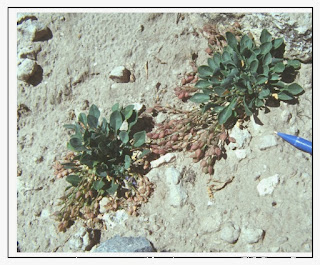 Above and below, Payson’s bladderpod on calcareous soils in the Salt River Range.  Is it a limestone lover?  a calcium addict?  a calciophobic calcicole?  We can only wonder.

This post is my contribution to the December Accretionary Wedge (#63) -- Plants and Rocks (or Rocks and Plants).

REMINDER!
Deadlines for December’s Accretion Wedge and Berry Go Round blog carnivals aren’t far off.  Take advantage of this month’s bargain -- two for the price of one!!  For AW #63 the topic is Plants and Rocks (or Rocks and Plants).  Geobloggers, this means you can submit your post to  the Berry Go Round as well.  The BGR is wide open -- submit your latest post(s) about plants.  If there’s a bit of rock or landscape involved, consider joining the Accretionary Wedge as well.  For more information, see:

AW #63: Plants and Rocks, or Rocks and Plants (deadline December 31) 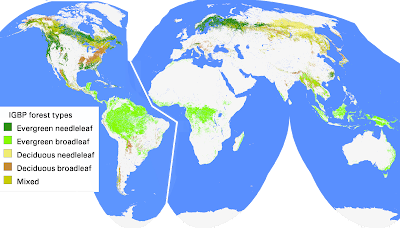 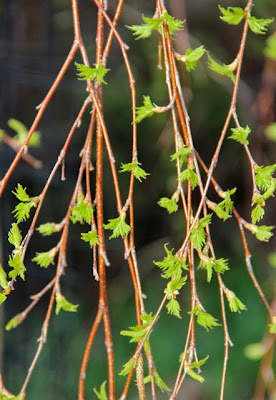 Is there a first s’more? (an existential question)

The transition from Indian summer to winter last week was brutally abrupt, and the frigid arctic air mass that arrived Wednesday hasn’t left.  Everyone likes to brag about our lows of -25º F but I think having "highs" only in the single digits is worse.  In any case, it's a challenge to be joyous during the holidays.  But there's a remedy ... 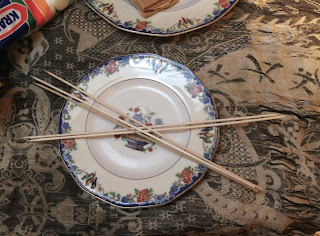 Place chocolate on graham cracker and marshmallow on stick; 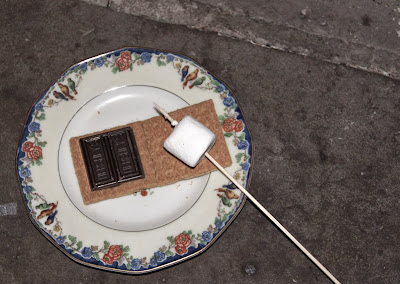 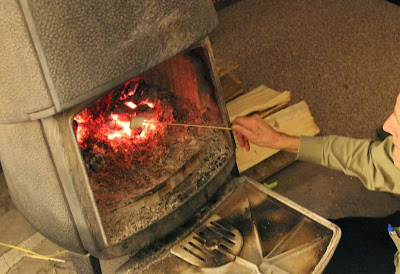 place hot marshmallow on chocolate;
cover with second cracker and gently mash.
Our first s’mores of the season brought up an interesting question:

How can one eat
ones first s’more
if one’s not eaten
one before?

For more on s’mores, see this excellent infographic by REI (however, it doesn't address the existential question of a first s’more). 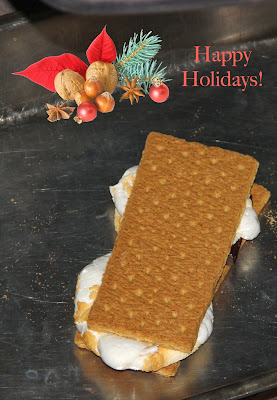 AW #63: Plants and Rocks, or Rocks and Plants

I’m hosting December’s Berry Go Round, a carnival for plant bloggers.  In my solicitation for posts I tried to encourage geo-bloggers to participate, as botany and geology often interact or are linked in some way.  Then I noticed that the Accretionary Wedge #63 geo-carnival was host-less.  I thought ... why not both?  My topic, Plants and Rocks or vice versa, was accepted making this the Bargain of the Year!  You can submit your AW contribution to the December BGR too.

To submit a post to the Accretionary Wedge, provide a link in a Comment below or tweet to @plantsandrocks.  UPDATE:  Deadline is the end of the month.  To join the December BGR, see the solicitation post for details.