In the spring of 1868, Union Pacific Railroad construction crews arrived on the Laramie Plains. They stayed for just a few months before racing west, but that was long enough to establish Laramie "City"—a wild lawless young town where the mayor and other officials resigned in despair just weeks after taking office. A vigilante organization of some 300 citizens was formed in response. That October they hung three men, including Steve Young, his crime now lost to history.

But Laramie soon grew up. Just two years later, it had both a library and a literary society—the beginnings of the longest literary tradition in Wyoming, longer even than Denver's some would argue!


On September 15, 1870, a seemingly improbable announcement appeared on page 3 of the Laramie Daily Sentinel:

“TO WHOM IT MAY CONCERN—All those who are interested in the formation of a Literary Society are invited to be present at the Schoolhouse on Tuesday evening, Sept. 19th, 1870, at 7½ o’clock.”

Barely two years old, Laramie was still a wild young town, home to just 828 souls (1870 census). Yet there was a fine turnout of enthusiastic citizens at the schoolhouse, and a society for cultural advancement was formed: the Wyoming Literary and Library Association (WLLA). James Hayford, editor of the Daily Sentinel, was not surprised. “Every thing of a moral, intellectual and social nature seems to spring up almost spontaneously, and grow and thrive luxuriantly, in our city.”

For nearly three decades, the WLLA would provide two valuable services to the community: 1) educational and entertaining lectures, discussions, and debates; and 2) a lending library. It was hoped these would supply alternative entertainment for the youth of Laramie. They should “spend their leisure hours and energies in sustaining this society, instead of wasting them at the saloon or card table,” advised Hayford.

Is it odd that lectures on intellectual and cultural topics were in demand in this small isolated wild west town? Not at all. They were a popular form of entertainment in 19th-century America, and made significant contributions to adult self-education—not unlike today’s TED talks. Professional speakers traveled lecture circuits across the U.S., stopping in communities large and small.


With limited resources initially, the WLLA turned to a free alternative—local talent. As Hayford explained in the Sentinel, audiences would not be subjected to “celebrated speakers [who would] come out here and speak their hackneyed pieces for one or five hundred dollars.” Instead, intelligent knowledgeable citizens, obviously familiar with the community, would speak. And what a bargain—a ticket to six programs was just $1.50! (about $30 today).


The October program featured five lectures on diverse topics, including ‘Chinese Labor’ and ‘Cheerfulness’, followed by discussion of a leading issue of the day—Female Suffrage. In November, there were lectures on charity, the mental culture and its improvement, and criticism. A highlight was Poe’s Raven, read by Mrs. Swain “with a great deal of taste” (several months earlier, Louisa Swain became the first woman to cast a ballot under laws granting women equal political rights).
Professional speakers were hired on occasion. In August of 1875 a Mr. Burbank gave a program of eight readings, including selections from Pickwick’s Dilemma (Dickens), The Jumping Frog (Twain), and the melodrama Shaugraun (Irish playwright Boucicault). Admission was 50¢. A year later, famous humorist and mimic Alf Burnett commanded $1 for reserved seating. Profits from such events supported the library.

On May 9, 1878, on page 3 of the Sentinel, a word in large font caught the reader’s attention: “GEOLOGY Six lectures on the History of the Earth, including the History of Man, would be presented by Wm. Denton.” This likely was the eccentric Wellesley geologist who studied the past by holding rocks and artifacts against his forehead. But there was no mention of psychometry amidst the usual exciting geological fare—volcanoes, fossils, dinosaurs, coal and such. Lectures would be “profusely illustrated” with dissolving views and dioramic effects produced with a Trinopticon (three projectors in one). Even with such advanced technology, tickets were reasonable: 50¢ per lecture, $2 for the entire series.

Finest Library in the West

Obviously lectures would contribute only so much to community improvement. More useful was the WLLA library of “selected books and standard periodical literature.” Six months after its founding, there were several hundred volumes, as Hayford proudly declared in the Sentinel. For just 25-35¢ per month [membership fee], citizens could “have constant access to the finest library in the west.”

The library produced its first catalog, a bound booklet, in March of 1873 (card catalogs were still a decade away). It listed 608 volumes, which the Sentinel, ever the booster, reported as “upwards of a thousand.” The emphasis was on non-fiction, not unusual in a time when many considered self education and improvement the primary purpose of library holdings.

It appears that throughout the WLLA’s existence, borrowing privileges were limited to paying members. Fees were $2 to join and $1 per quarter, or $25 for a life membership. However, nonmembers were welcome to read periodicals in the library. These included popular magazines such as Scribner’s Monthly, Atlantic Monthly and Harper’s Weekly, and newspapers from major cities of the eastern U.S.

During its first decade, the library resided with whomever was librarian, making for some interesting situations. In March of 1871, it was housed in the “Drawing Room” of J.J. Clark. Actually it was his office, but being a dentist—one who “draws” teeth—he considered the euphemism appropriate. The Sentinel assured patrons they were not obligated to have a tooth pulled every time they borrowed a book “even if the Doctor tries to persuade them this is one of the rules of the Library.”

For several years, the Reverend and Mrs. D.J. Pierce hosted the library in their living room. But a private home discouraged use. They hoped to remedy the situation with a letter to the Editor: “We cordially invite all members of the W.L.&L.A. to visit the library at any hour of the day, after 9 o’clock a.m., for consultation of books and assure them that as long as they wish to remain for that purpose, their presence shall not be deemed irksome …”

Other locations included the County Clerk’s office, attorney C.W. Bramel’s office, possibly the schoolhouse followed by the post office, and the office of Dr. J.H. Finfrock, physician and pharmacist. Then late in 1876, there was good news for those tired of moving books. Col. S.W. Downey, attorney and long-serving member of the WLLA, would put up a brick building the coming spring. When completed, the upper story would be available to the library, at no charge. In the meantime, it shared an office with Downey's law practice, as announced in the Sentinel: 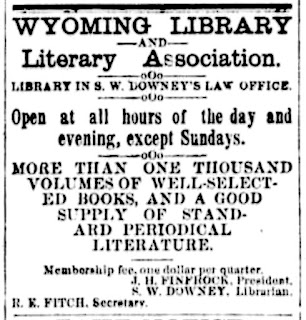 In January of 1878, Downey’s building was far enough along for preparations to be made on the upper floor. With $500 raised in just four days, carpets and furniture were purchased and installed. All books out on loan were recalled. After making what many hoped was its final move, the library opened.

The creation of free public libraries in the U.S. greatly accelerated during the second half of the 19th century, due largely to philanthropy and promotion by multi-millionaire Andrew Carnegie. “There is not such a cradle of democracy upon the earth as the Free Public Library” he declared, “… where neither rank, office, nor wealth receives the slightest consideration.”
In 1886, Wyoming Territory jumped on the bandwagon when the Legislative Assembly passed a law allowing counties to levy taxes for public libraries. The next year, the Albany County Commissioners did just that. A tax of ⅛ mills raised $780.60 the first year.

WLLA books would form the nucleus of the new library. But expanding the collection still depended on fundraising and donated books; county money could be used only to run the library. To complicate things, space had again become a problem—Downey’s upper story was no longer available.

The public library started out in the “High School” in the East Side School (today’s Laramie Plains Civic Center). New bookshelves furnished by the school trustees suggested permanency. But soon the library was back to wandering, its exact path unknown. The Sentinel reported it in the Odd Fellows’ building in 1880, and above the post office in 1883.

In 1897, the library had been residing for some time in the Republican newspaper building at taxpayer expense (rent). When civic leaders proposed construction of a building specifically for the library, Republican owners strongly objected, thereby launching vehement attacks by the Daily Boomerang. “The Laramie Republican has so long been supported by public taxation that it is hard for the outfit to let go” railed the Boomerang. “They remind one of the Dutchman … who was so accustomed to the odor of decayed fish that he fainted when he got a breath of fresh air.”

Honored Sir, Please Give Us a Building

“What is the best gift which can be given to a community? … a free library,” wrote Andrew Carnegie. Several of Laramie’s civic leaders took him at his word, and “earnestly appealed” for money—successfully as it turned out. Carnegie pledged $20,000, and by 1906, our library had a home of its own (see Robber Baron Gives Laramie’s Library a Home).

There the library stayed for 75 years, until it moved to its current location in 1981. From an inauspicious start as a literary society in a remote wild west town, our library service has continued for 150 years—longer than in any community in Wyoming. In fact, our library is longer-lived even than Denver’s, which closed for a time due to insolvency (as announced in the Sentinel of course). We have good reason to be as proud as Mr. Hayford was.

[This is my most recent contribution to the “Living History” column of the Laramie Boomerang, published January 12, 2020. All “Living History” articles are available at the Albany County Historical Society website.]

It’s January in Wyoming, a time of cold here in the continental interior, and mostly a season of dormancy for trees. But I visited the tree I’m following anyway.

I thought I was taking a photo of my tree against the wall (first photo below), but it’s the one next to it (same kind). Mine is hidden behind the two trees growing in the island in the sidewalk. It has far fewer leaves than its neighbor, which is better protected from the wind. 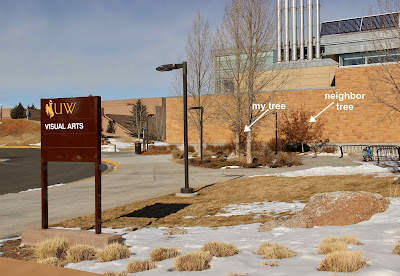 With samaras, opposite branching, and colorful leaves (last fall), these may be maples … 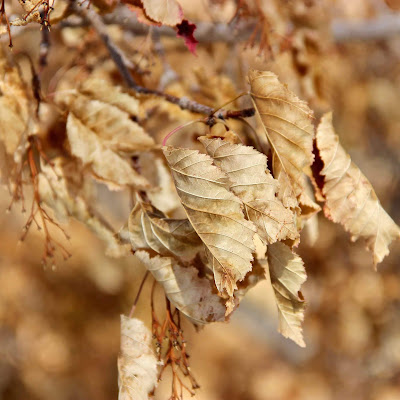 … but I find it hard to believe these are maple leaves. What do you think?


That’s it for tree news, not too exciting. But one benefit of following this tree is that even when it’s not doing much, there's an art building next door with something of interest inside … except this time. It’s winter break. The doors were unlocked, but there was no art. So I had to make my own—abstracts composed of angles, shapes, and light.
It has been a long time since I’ve played with my camera this way. It's wonderful! Making abstract compositions from real views is so engrossing that the rest of the world fades away.

This is my contribution to the monthly gathering of tree-followers, hosted by The Squirrelbasket. News about everyone's trees can be found here. Consider joining us! Never any pressure, and you can let your creativity run wild. 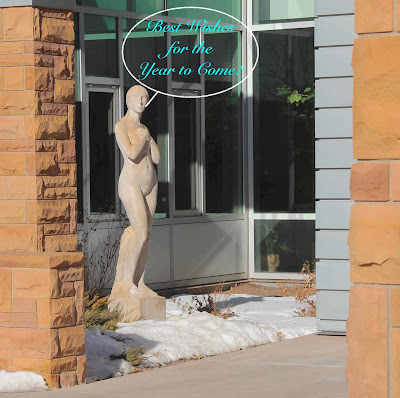