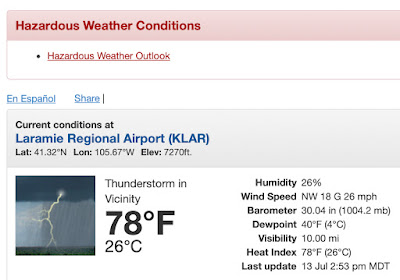 I had it all planned: errand 1, errand 2, … errand 5, then to LaBonte Park to visit the tree I’m following. It would be a nice outing by bicycle on a sunny afternoon in Laramie. True, a dark sky loomed to the north. But the wind was from the south, should be fine.

The first raindrops fell when I left the post office for the park. Then more. Did I continue, sit under a picnic shelter, wait it out? No. Now I’m home listening to raindrops, thunder and the howling wind.

Fortunately, the Squirrel Basket, who hosts our monthly gatherings, has noted: “Some of you may be able to visit your trees but for others any tree-related post will be acceptable during these unusual times. I’m sure you will think of something interesting to say.”

I don’t really qualify as being unable to visit my tree. But in any case, I didn’t. So I offer this post about fir broom rust, a fungal pathogen of true fir trees in North America. An overpoweringly sweet one stopped me on a hike last month.

Rusts have a reputation for being so complex and esoteric that only a bionerd would want to learn about their life. Yet among the readers who enjoyed the post were a musician and a paleontologist. Maybe you will too …

Rust in the Forest – complicated, but at times sweet

First I spotted it—dense yellow growth on a subalpine fir (Abies lasiocarpa). Then I was hit by a powerfully sweet odor reminiscent of evening primroses opening at dusk. Up close, it was truly nauseating! The similarity of the deformity to the tree suggested a pathogen had modified its growth. But why the sickeningly sweet smell?

At home it didn’t take long to learn more. This is a common fungal pathogen of North American true firs—the fir broom rust, Melampsorella caryophyllacearum. Like all rusts, it’s an obligate parasite, unable to live on its own. It causes the fir to produce a dense growth of small shoots, a witch’s broom. Why? For reproduction, of course!

A simple answer, yes, but this is where things get really complicated.
Maybe you're like me, with vague memories from your college days of the notoriously complex life cycle of rusts. The fir broom rust fully lives up to this reputation, as it is macrocylic, passing through five different stages, each with a specific type of spore and reproductive structure. Furthermore, fir broom rust is heteroecious—requiring two different plant hosts. Can this really work?!

There’s no need to learn a lot of intimidating terms to appreciate the amazing life of a rust. Just being exposed to its convoluted but successful reproductive strategy—to understand it in a general way—is worth the time and effort. Let’s start at a convenient point in the life cycle.
A broom rust spore is carried by the wind (1. in diagram above) to a lower branch of a fir tree. If it happens to land on the growing tissue of a recently-opened bud, it produces a tiny tube that enters the host and causes growth of short disfigured shoots—the broom.

From the needles of the broom grow fungal reproductive structures of two types. The first produces sexual spores (2. in diagram above) in droplets with the distinctive too-sweet odor. This attracts insects, some of which might manage to carry a sexual spore to meet another of its kind for fertilization. If successful, a third type of reproductive structure is produced (photos below), releasing orange spores to be carried off by the wind (3. in diagram).
This is the part that amazes me. These spores CANNOT infect fir trees; an alternate host is required. In the case of fir broom rust, perennial chickweeds serve as alternate hosts. They are members of  the pink family, Caryophyllaceae, which explains the second part of the rust’s scientific name.

If one of these wind-borne spores happens to land beneath a chickweed AND conditions are suitably moist, infection will occur. After a few weeks, reproductive structures of yet another type grow on the stems, leaves and flowers of the chickweed (photo below). These produce spores that can infect other chickweeds (the spreading infection at 4. in diagram). And so it goes through the end of the summer.
The rust persists through the winter in the base of the chickweed plant; in spring, it infects new growth. But this time a different kind of spore (5. in diagram) is produced from a different kind of reproductive structure, and only on the lower leaves of the chickweed. These spores then divide to produce another kind of spore (actually, a familiar one). Millions of these fly with the wind to maybe land on … can you guess? … a fir branch! We’re back to 1. in the diagram.

It spite of massive numbers of spores, it seems the chance of success in such a life cycle is slim. Though a single broom produces millions of spores in a season, rate of chickweed infection is quite low. An infected chickweed in turn produces millions of spores, but rate of fir infection is equally low (except in monocultures such as Christmas tree farms). Yet the fir broom rust carries on. That’s optimism!
Posted by Hollis at 3:09 PM 3 comments: