A Random Hike on a Reef

Wild Horse Canyon – one of those beautiful Utah slot canyons – has been calling me for years.  On a Friday in mid-October I was nearby with time to visit.  “Great!” I thought ... naively.  At the trailhead two of the three parking lots were full, and people were in line to use the restrooms.  This is not unusual I later learned.

I opted for a road less traveled and drove to another place I’ve always wanted to visit – the San Rafael Reef, specifically the stretch just west of Utah Highway 24.  The intricately carved pale rock extending for miles has always looked so inviting.  But wait ... a reef in Utah ... a land of deserts and mountains ... far from any coast?
Of course this isn’t a true reef.  It isn’t even an ancient reef though this part of Utah was underwater in the past.  It’s a ridge of fossilized sand dunes almost 50 miles long.  Early travelers called these rock barriers “reefs” – Silver Reef, Buckeye Reef, White Reef, Capitol Reef, etc.
The San Rafael Reef was once part of an erg or dune field.  Last week I mentioned the Entrada erg which used to cover much of Utah.  This is the Navajo erg.  It’s older – roughly 180 million years old (it’s hard to date as ergs typically lack fossils) – and was perhaps the largest erg on earth ever.  Like the Entrada, it become sandstone after being buried under thousands of feet of sediment.  Then during the Laramide orogeny – the mountain-building event that created the Rockies – the area was folded to create the San Rafael Swell (uplift) with the Navajo sandstone and other sedimentary strata steeply tilted on the east flank.  Erosion has exposed and carved it into a nearly impenetrable wall ... a reef.
Between Interstate 70 and the turnoff to Goblin Valley State Park, Highway 24 runs almost parallel to the Reef; they’re separated by less than three miles much of the way.  A few dirt roads turn off west, and I found one that ended near a possible hike.  It looked like a continuous route to the top, but I knew better. Like modern day dunes, these fossilized ones were hardly continuous for long.  Slopes were dissected by gullies.  It was up and down to connect walkable slopes, and you can’t just slip-slide down rock dunes like you can in sand.  However we managed to wander to the top, taking in great sights along the way.

Cross-bedding was everywhere, typical of dunes and wind deposition. 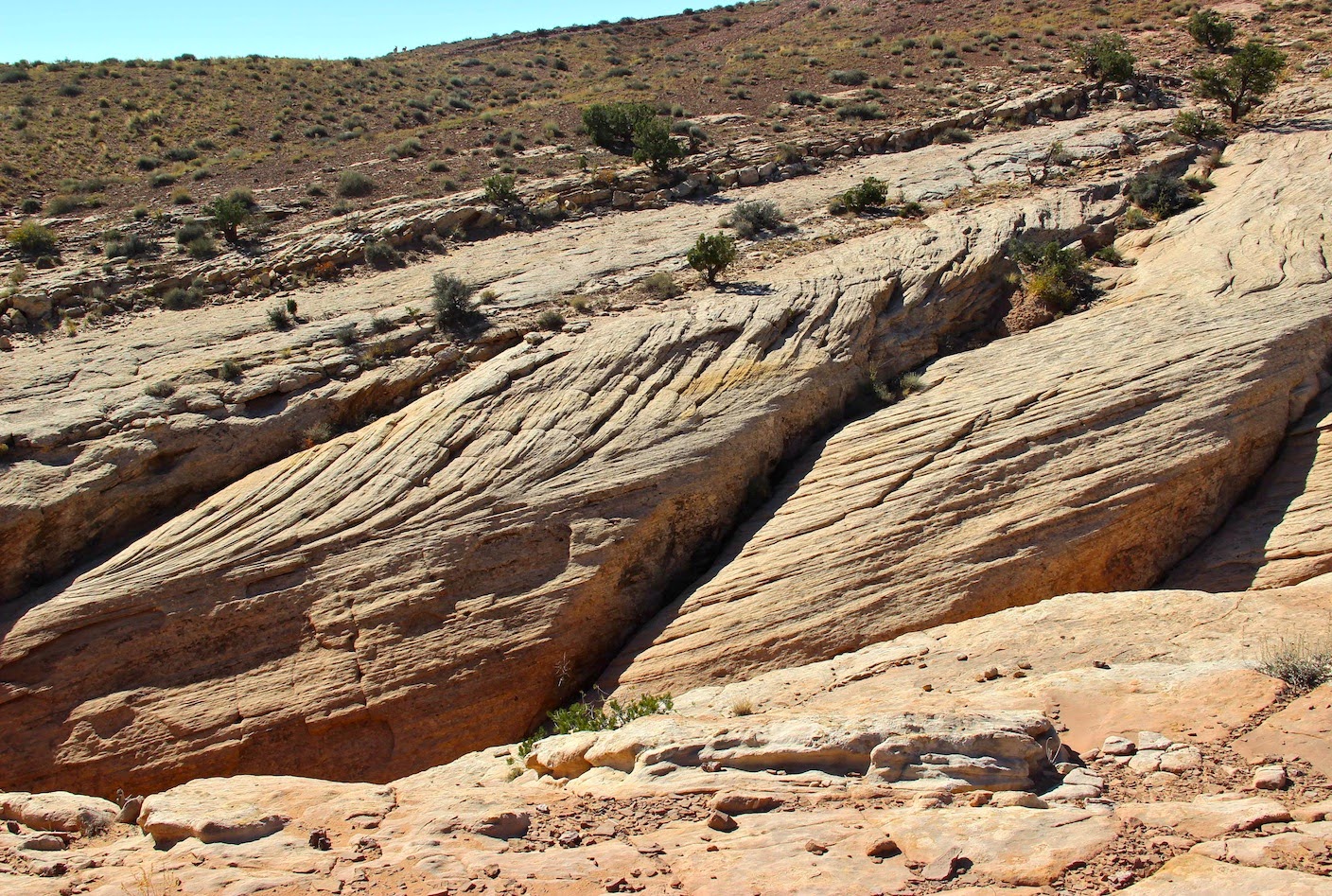 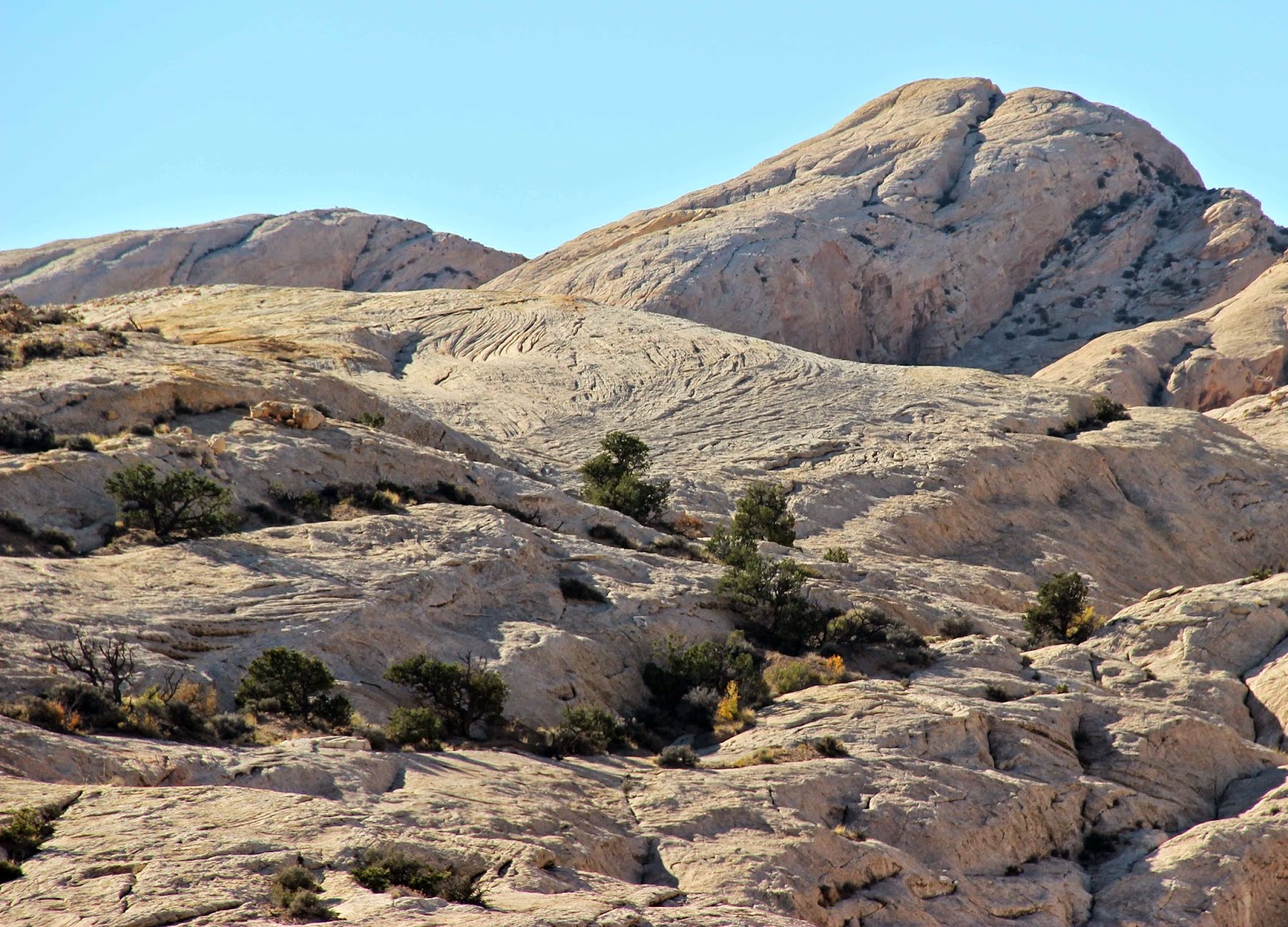 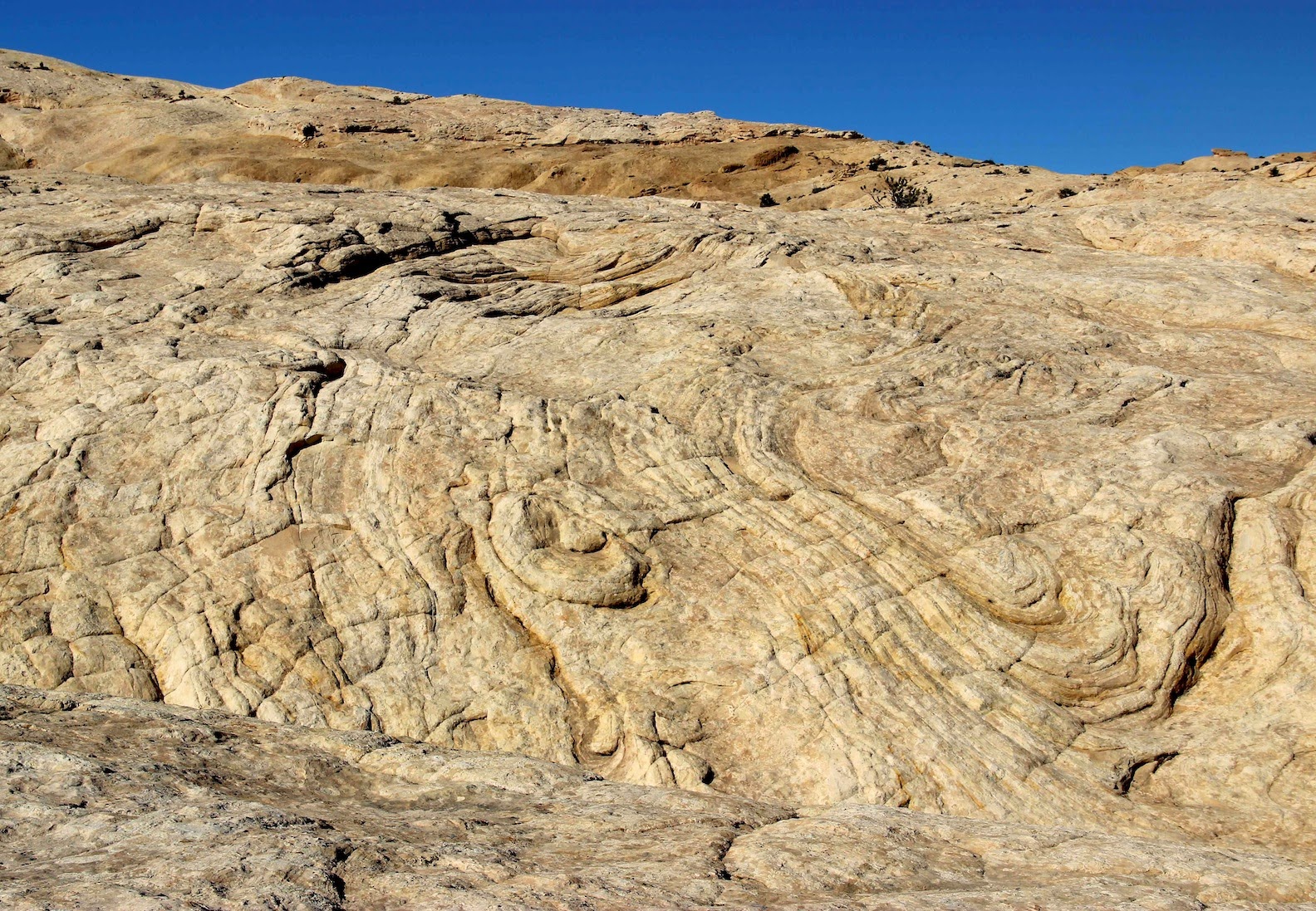 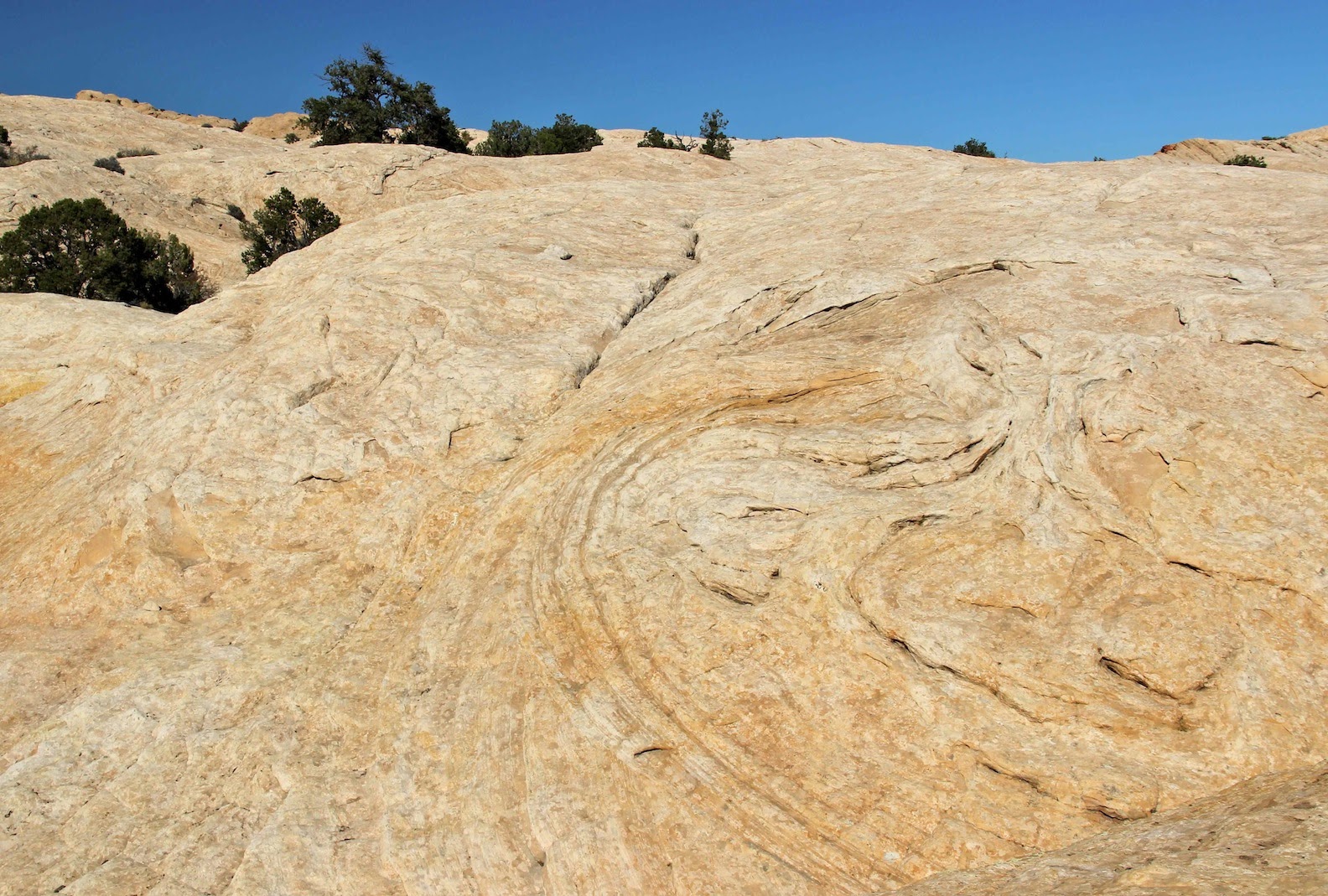 In places, the sandstone had fractured along a network of joints. 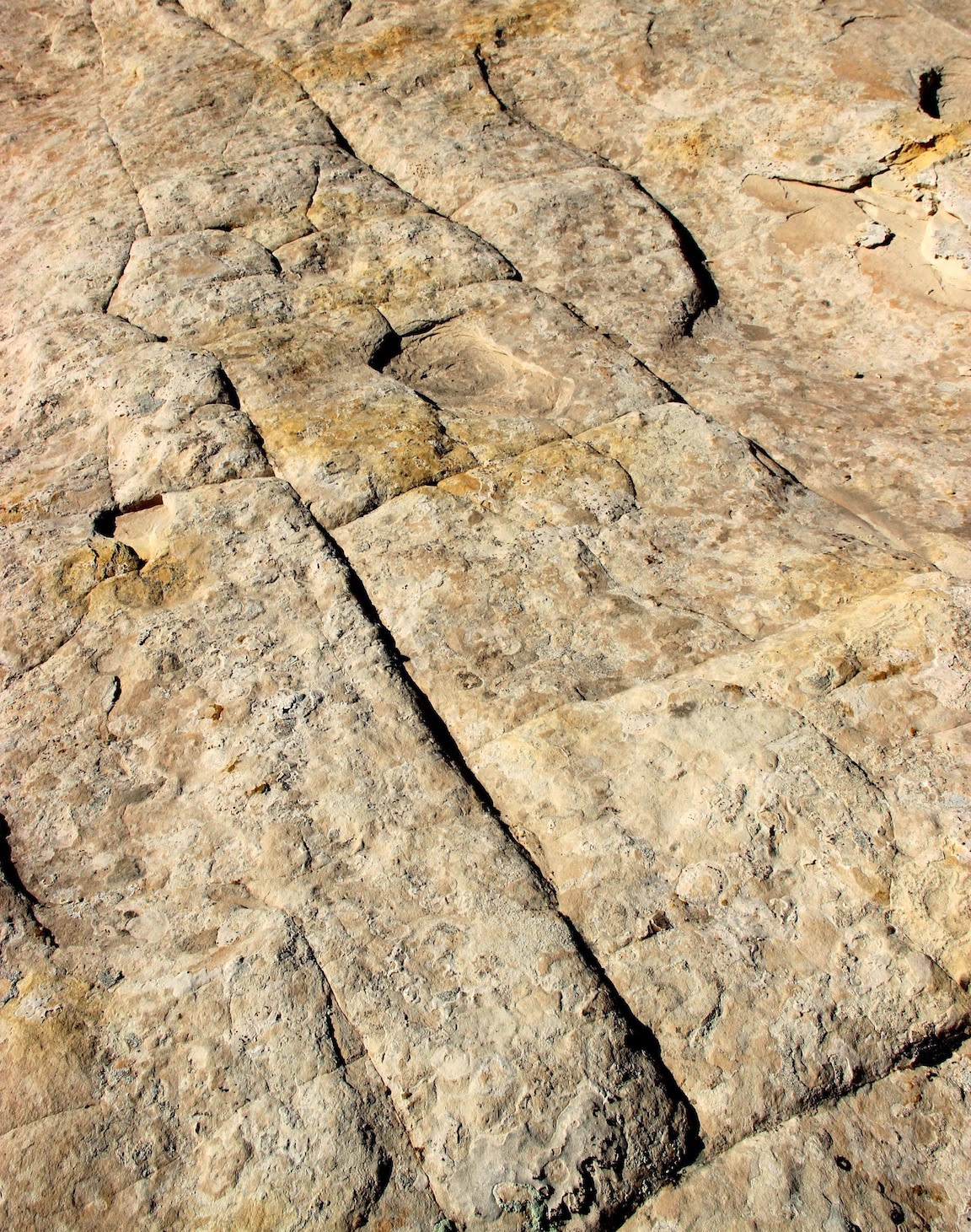 Plants thrived in gullies, and other nooks and crannies.  Some managed to grow from small shallow cracks in the sandstone.  Bonsai-like junipers and pinyons were common.
Hiking on the pale rock was a bit like being in a reflector oven – surprisingly warm.  But shady spots provided relief for weary travelers. 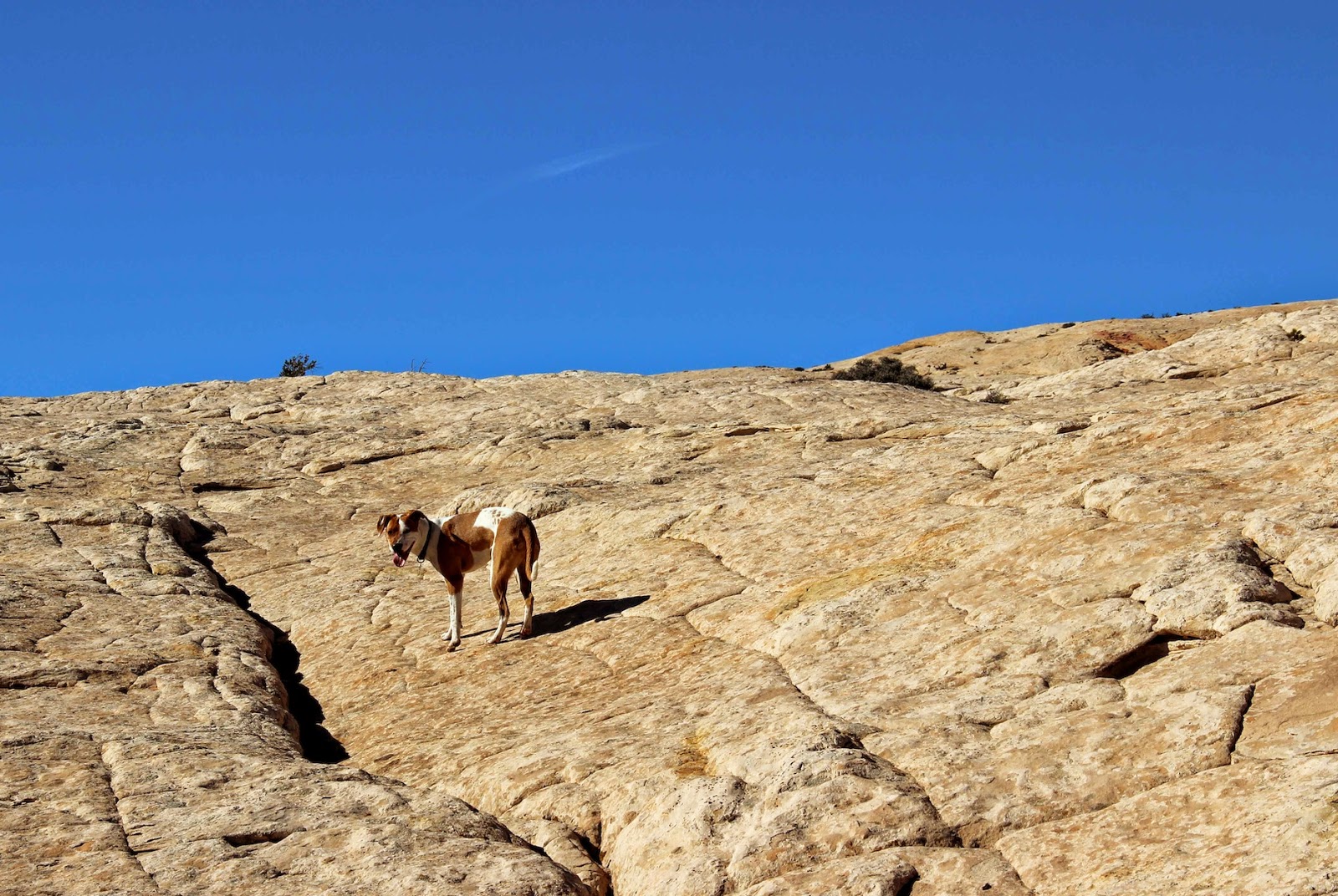 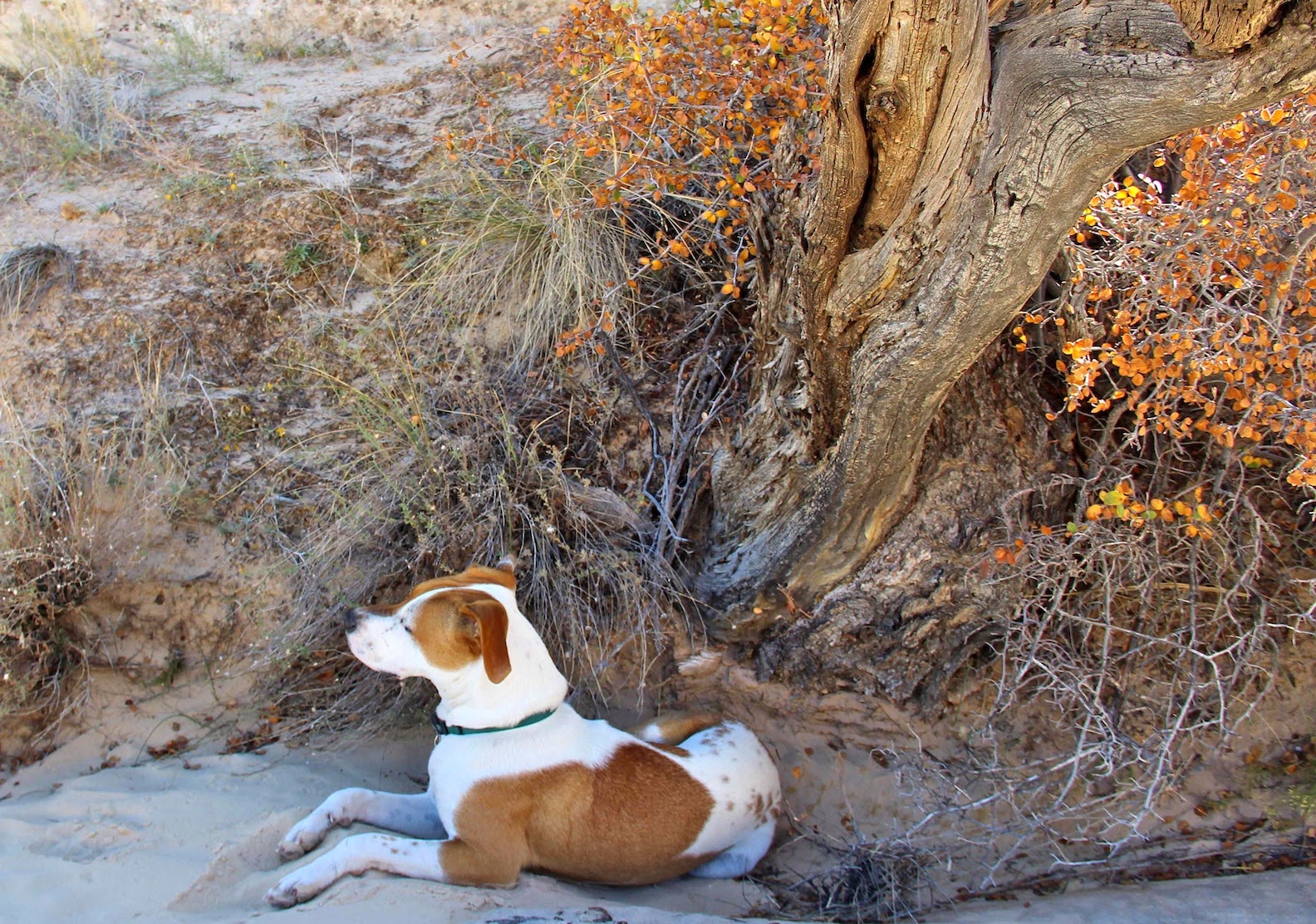 Wonderful views were everywhere.  This country is magical.  We’re so lucky that so much of it is public ... where we can wander and explore to our hearts' content. 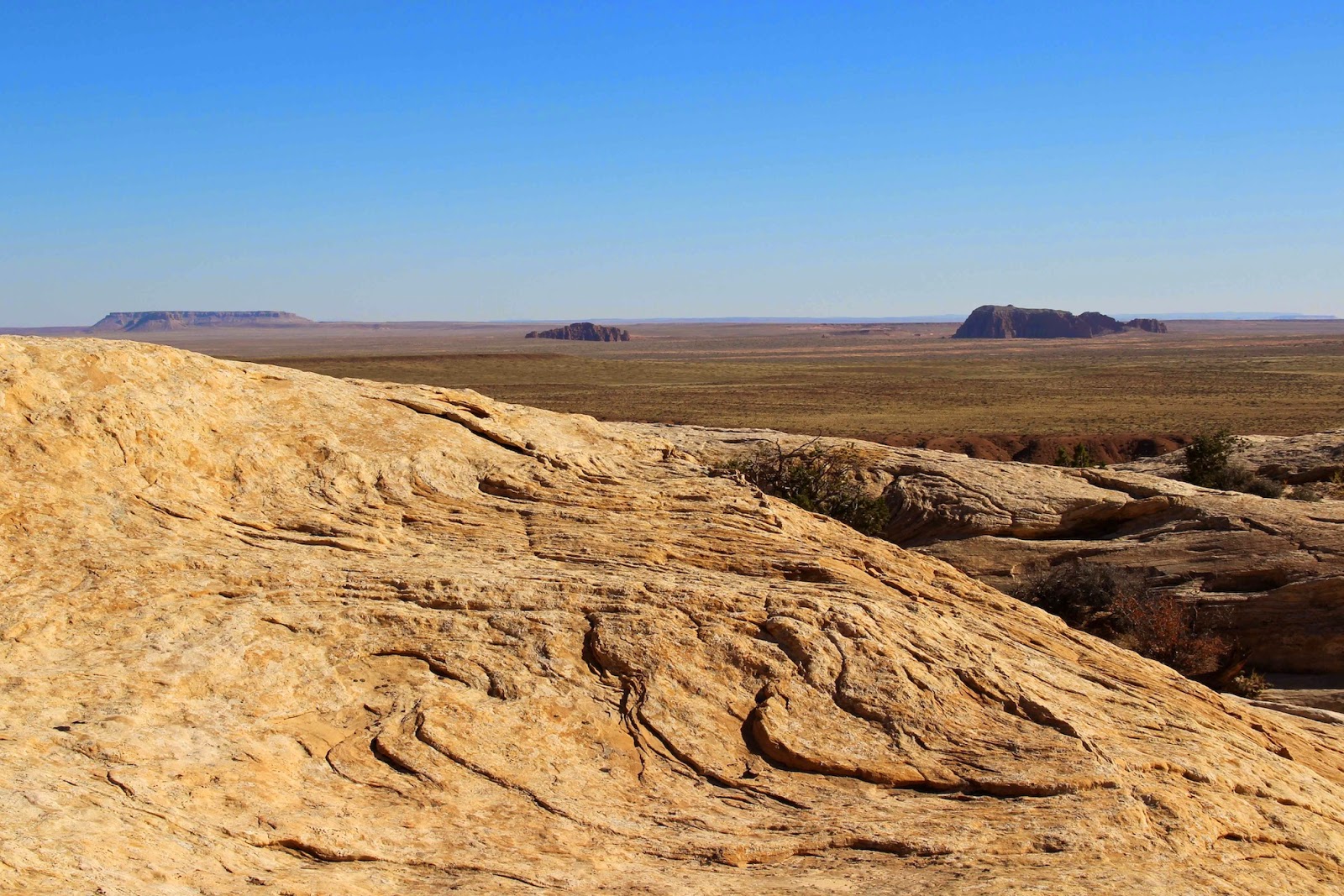 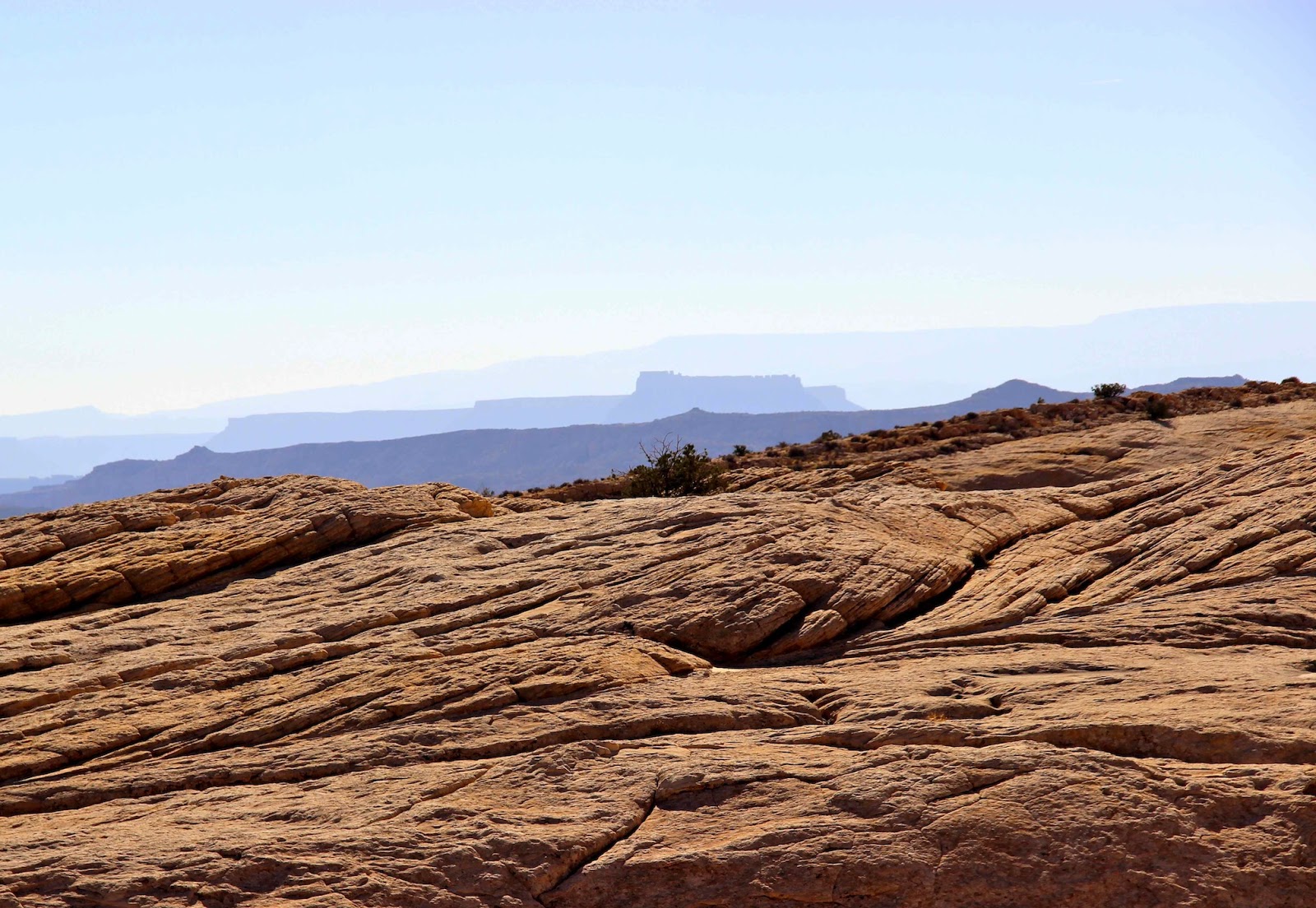 For more about the geology of the Swell and Reef, see the excellent and entertaining Geology of the San Rafael Swell by Jack Share, who kindly supplied several photos for this post.  You will find more equally-spectacular ones if you follow the link.

Life of a Goblin

On Halloween I posted a day-appropriate geo-challenge.  The answer is ... Goblin Valley State Park in southeast Utah.  Here goblins live and die.  No one has measured their lifespan precisely, but we know it’s pretty short considering they’re made of rock.

Younger goblins sport jaunty caps of sandstone that protect underlying softer rock for awhile.  But erosion takes its toll.  The goblins finally lose their caps and then vanish.
The geological term for goblins is "hoodoo".  There’s some disagreement as to what qualifies as a hoodoo.  There are broad definitions:

Hoodoos are tall [or not] skinny spires of rock that protrude from the bottom of arid basins and "broken" lands (National Park Service).

Capped hoodoos frequently are called mushroom rocks, and indeed Arthur Chaffin, who reported these hoodoos in the late 1920s, called the area Mushroom Valley.  Later it was acquired by the State of Utah and became a park in 1964, changing names along the way.
Undoubtedly Chaffin was not the first to see the goblins.  This is the land of the Ute people, and surely they had stories to explain the odd forms.  Indeed many look like animate beings turned to stone.  But it seems any such stories are lost.  In contrast, geologists have written down their story so we still have it.  It starts like this ...
Roughly 150-200 million years ago, a giant erg (dune field, like the Sahara) covered much of eastern Utah just south of a shallow sea.  Later the dunes were buried under terrestrial and marine deposits and eventually turned to rock.  Then the region was uplifted.  Erosion went to work, exposing the sandstone.  Weathering and erosion sculpted fantastic forms – arches, tafoni and hoodoos.  In 1928 two geologists, Gilluli and Reeside, formally named and described this particular sandstone – the Entrada (Milligan 2003).

The Entrada varies from place to place because the original landscape varied; it wasn’t all dunes all the time.  Goblin Valley was a broad tidal flat about 170 million years ago (University of Utah no date), draining into the sea to the north.  This itself was a land of change.  There was the ebb and flow of tides, depositing sand and mud and then eroding it.  Tidal channels shifted.  Dunes came and went.  The shoreline moved as sea level changed.  There’s a record of all this in the rocks at Goblin Valley:  large-scale cross-bedding of ancient dunes, filled-in remnants of tidal channels, fine cross-bedding indicative of ebb and flood tides, and bands of different rock types – siltstone and shale as well as sandstone (Milligan 2003).  These interbedded strata are critical for hoodoo development.
Sandstone is harder and erodes more slowly.  It can protect underlying siltstones and shales to some degree.  But they still weather and erode, first becoming pedestals, then just piles after the sandstone cap falls, and finally part of the dirt around them.
Goblin development depends on vertical cracks as well as horizontal layers.  It's in these cracks that weathering and erosion start.  Goblin Valley lies within an area where the Entrada is extensively faulted (Milligan 2003).  Just north of the Park are multiple sets of vertical microfractures that form blocks on a scale similar to goblin size.  It’s assumed that these occur in the Park too.
There may be a third factor in development – the degree to which sand grains are cemented together.  This might explain the oddly-shaped caps.  But no one has studied cementation in the Entrada sandstone in the Park.
To visit the goblins, take Utah State Highway 24 southwest from Interstate 70 west of Green River, or northeast from Hanksville to the signed turnoff to Goblin Valley State Park.  Milligan (2003) described it as “one of Utah’s most remote and isolated state parks” but no such luck now.  It’s popular, especially in spring and fall.  The goblin overlook was busy on Friday and Saturday, but after a short hike into the desert I saw no one.  The small campground has nice but tightly-clustered sites (and a few yurts).  For $20 you can get a tent site and shaded table, drinking water, great scenery, and a free-but-challenging hot shower under a very narrow stream of water.

Added Note:  I intended to explain that my camera had a tough time with color in goblin habitat.  I made some improvements with iPhoto, but many of the photos still look a bit surreal.

A visit to the First Ice Art of the Season exhibition 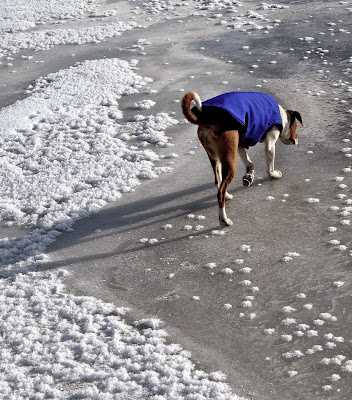 As you may have heard, the jet stream curved far north around a ridge of good weather and then curved south, followed by the infamous polar vortex ... or “winter” as we call it.  Indian Summer had been soooo beautiful, with highs in the 50s!  Then Winter came screaming in.
Winter's sudden arrival was a shock, and I can’t say I’m feeling all that great about it.  But there are antidotes.  One will be skiing once there’s enough snow.  Another is ice art.  Jack Frost followed close on the heels of Winter, and has been making his beautiful hoarfrost sculptures on the river ice. 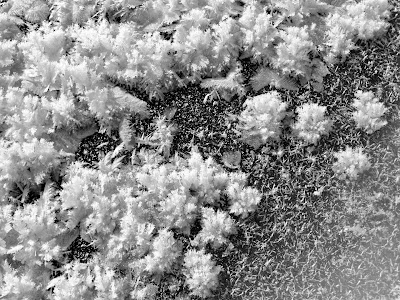 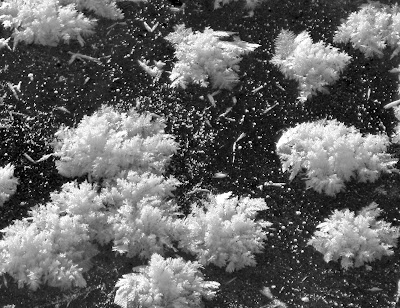 The river was completely open three days ago.  Now it's mostly frozen over.  There are a few small openings with flowing water, but they won’t last.
What do beavers do in winter when the river freezes?  Hibernate in their lodge?  UPDATE:  Beavers don't hibernate; see note from Nina F in Comments.
I post about ice art every winter.  We are so lucky to have it ... thanks, Jack!