Valley of the Angry Fingers (& a geo-challenge)

In April I toured the Valley of the Gods in southeast Utah, east of Utah Highway 261 below the Moki Dugway.  It’s underlain by the Cutler Formation … actually it’s called “lower Cutler beds” here because geologists can't agree on a name(s).  The rocks are Pennsylvanian-Permian in age, roughly 300 million years old.  It's a red landscape: red soil, red cliffs and eye-catching red pinnacles, many of them named.

We're in the habit of naming rock outcrops that have suggestive shapes.  There are plenty here, thanks to the erosion-resistant Cedar Mesa sandstone, which provides protective caps for softer Cutler rocks.  Santa Claus, Rudolph, a rooster, a setting hen, a bell, a battleship, seven sailors, and De Gaulle and his troops all reside in the Valley of the Gods, which prompted the question: “where are the gods?”  Then I came upon the Lady in the Bathtub and was really puzzled.
Turned out my perspective was wrong, as I had driven in from the west.  I needed to go a little farther, and a little further around the bend.  There she was … a Cedar Mesa beauty luxuriating in a Cutler bathtub. 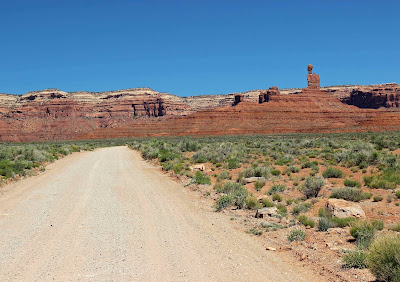 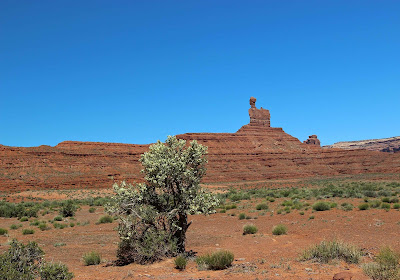 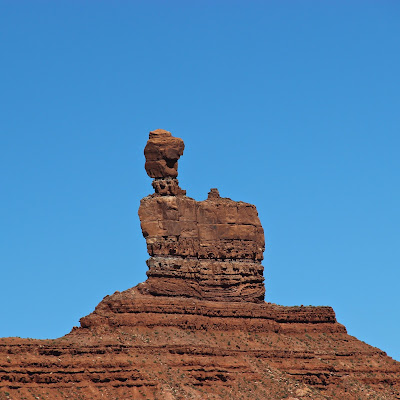 More interesting to me was the curious feature in the rock layers near the base of her bathtub – this is the geo-challenge (I have no answer at this point). 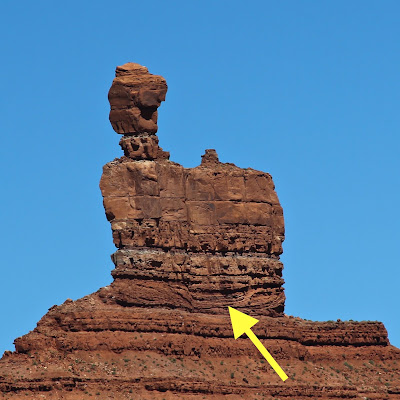 These are typical lower Cutler beds, with alternating layers of mudstone, sandstone and limestone.  Was there a depression in the surface where the sand and limy sediments were deposited?  Or was the underlying layer deformed later?  Any modern-day examples?

In the Company of Plants and Rocks is taking a few weeks off to go to summer camp – specifically Summer Music Camp at the University of Wyoming, for kids ages 12-17. Obviously I'm not a camper, but it's almost as much fun as being one.  I'm the World Music instructor.  We do a little listening and watching, and discuss cultural roles of traditional music, but mainly we play.
We play sikus – panpipes from the Andes.  There are two different sets of pipes – iras and arcas.  Each has every other note of the scale.  Half the class plays iras and the other half arcas, using an interlocking technique (hocketing) to produce a single tune.  Everyone think's it's impossible the first day of class, but by the end ... they sound great!
Here's 27 de Junio Nuevo Era, our sister group in Puno, Peru.  Several University of Wyoming students studied traditional flute music in the Puno area.  They met this group, and came home with sikus and tunes. 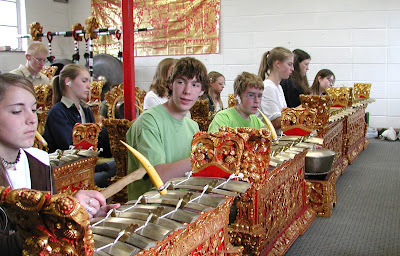 The University also has a Balinese gamelan – tuned percussion instruments, mainly metallophones and gongs.  Gamelan music is made up of cyclical patterns ranging from simple to complex.  So there are parts for everyone. 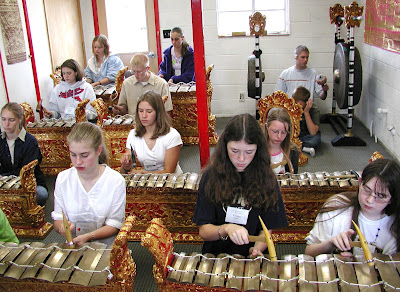 This year we’re doing something new:  amadindas – tuned percussion instruments from eastern Africa (e.g. Uganda).  You can experience a real amadinda in Bela Fleck’s Throw Down Your Heart.  Here’s an excerpt.  These guys are fantastic!
Our amadindas are much simpler, and easy to make.  Cut tone bars from 2x4 inch lumber (I used 8 foot studs), trim lengths to adjust pitch, apply a finish (I used Danish oil), and glue foam “feet” on the bottoms.  Cut 8 inch mallets from 3/4 inch dowels.
To play the amadinda, strike the edges of the ends of the tone bars.  It can be played solo, or by two people on opposite sides (hocketing).  Play on a table, on the floor, outside on the ground, or on a counter in the kitchen … just line up the boards and go!

Making music is for everyone!

Willow Identification – not for the faint of heart

Another month has passed.  I do think they go by faster and faster, as I was told they would. Already tree-followers are gathering to share stories and photos about their chosen trees, as they do every month.

But I’ve been away, and two months have passed since I last reported on my willow.  It bloomed early – catkins were emerging by the end of February.  When I left town in late April, it was in full bloom.  But there were no leaves, and its identity remained a mystery.

One needs leaves to identify most willows, and even then it isn’t easy.  I checked shortly after I got back, in mid-May.  There were only young leaves – yellow-green and expanding.  It still was too early.

But now spring has arrived.  Plants are green, fresh and beautiful.  And there are willow leaves dancing in the sunshine. 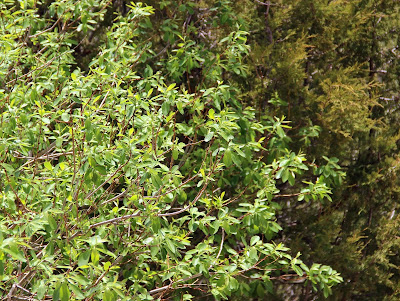 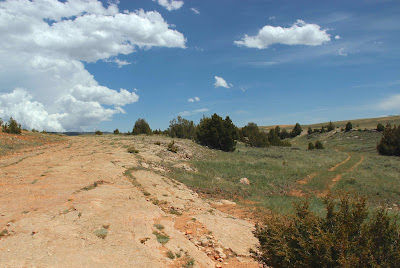 Soon stay left and walk up a very small wash.  See the willow ahead?  It’s the paler richer green among the conifers. 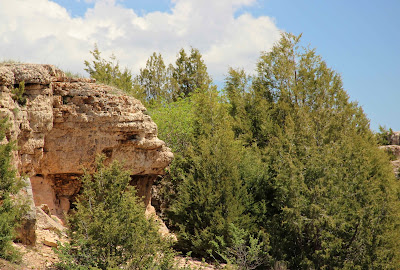 The willow lives in a small nook in the north canyon wall, shaded by a cliff and two junipers.  Squeeze past the junipers to enter the nook.  It’s dark, cramped, and hard to capture in photos.  Hopefully there are fairies and elves about … certainly feels like appropriate habitat!

The willow grows out of a crevice at the base of the wall.  The main stem grows horizontally, with vertical branches. 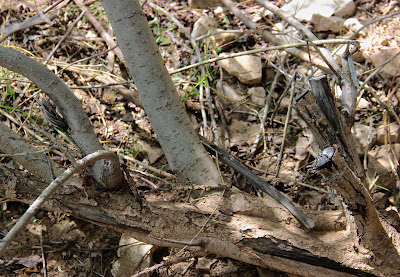 What kind of willow is it?  Sadly, with all those leaves I couldn’t ignore the question any longer.  Willows (genus Salix) have a reputation for being tough to identify.  Differences between species can be subtle and hard to explain in keys and descriptions.  There can be a lot of variation within species too.

I sat in the nook and opened Vascular Plants of Wyoming 3rd ed (RD Dorn 2001) to the dichotomous key for willows.  Dichotomous means two alternatives at each step or choice. 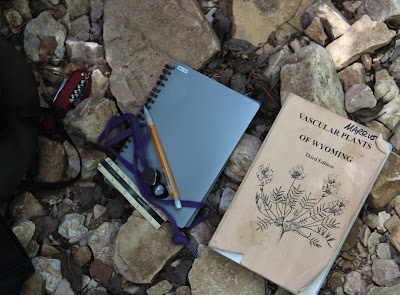 The first choice was easy.  This is not a low creeping shrub.  But then there was a problem:  "twigs of previous year, and sometimes those of season, pruinose.”  Pruinose?  “with a bluish-white bloom on the surface that can be easily rubbed off” explained the glossary.  These twigs are not pruinose.  They’re reddish and even a bit shiny. 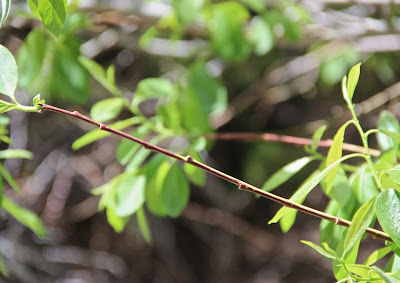 Next choice: leaves linear, or not.  Clearly not.  But then another problem:  leaves equally green on both sides, or leaves “obviously [italics mine] lighter below from glaucescence or hairs” … a tough call.  They looked somewhat lighter below.  There were no hairs, but I wasn’t convinced about glaucescence, which means slightly glaucous … glaucous being “with a white or bluish waxy covering that easily rubs off” (why didn’t they just say pruinose?). 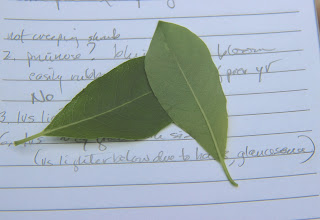 I chose leaves lighter below.  Next choices were easy.  Leaves not tomentose (densely hairy) below, leaf tips not long acuminate (long tapering), twigs not glutinous (sticky yellow), twigs of the year not hairy.  But then: “plants with mostly oblanceolate to obovate leaf blades” or not.  Ob- means upside down and is used when leaves are widest at the tip instead of at the base or middle as we expect.  Quite a few leaves on this willow were obviously ob- … but others weren’t.

However, if I had chosen “mostly ob-” then I would have ended up at Salix scouleriana which gives off a skunky smell when twigs are torn.  Not the case.  Also, twigs and leaf undersides in Scouler’s willow have short dense reddish hairs (source) – not mentioned in this key.  So I concluded that the leaves were less-than-mostly ob-something.
Then there were more easy choices – leaves with toothed margins, this year’s twigs not hairy, leaf midribs and petioles (leaf stems) not red, twigs not brittle at base, no glands at base of petiole, leaf margins not sharply serrate, year-old twigs not yellow, and finally (whew!) … less than 10 teeth per cm on leaf margins mid-leaf.

I arrived at Salix discolor, the American pussy willow ... which was what I thought this tree might be when I saw kitten paws emerging from flower buds in late winter!  Pussy willow is one of the first willows to bloom.  This one had catkins in February, when our average daily air temperature was 22º F (-5.6º C; source).
It might seem that after all that effort I would feel confident about my determination.  But that would be foolish.  I took a specimen to the Rocky Mountain Herbarium, at the University of Wyoming, to compare it with their specimens.  It was a good match.  Interestingly, color difference between upper and lower leaf surfaces varied a lot among specimens, and at times was as subtle as in mine.  And more than a few specimens had mostly oblanceolate leaves ... sigh.  But as our field botany instructor used to say, "a key is only a guide."  For tough groups like willows, visit an herbarium!  [There are many online now.] 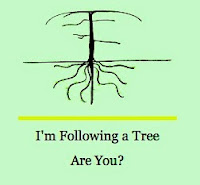 Meanwhile, back at the ranch …

Recently I’ve been blogging about my travels, but it’s time to take a short break because here at home, things are happening!  A tree is in leaf (more about this next week) and midges have emerged.  Maybe.

Last March I wrote a post about the cones that are so common on willows along the Laramie River.  Of course they’re not really cones.  They’re galls that are shaped like pine cones.  And wouldn’t you know it – they’re called pinecone willow galls and are caused by the pinecone willow gall midge, Rhabdophaga strobiloides, a tiny fly.

The midge lays an egg in a terminal bud, and the egg and the larva that hatches release a chemical causing the plant to grow numerous small overlapping leaves – the “cone”.  The larva matures inside for about a year, and then metamorphoses into a midge which emerges and flies away to repeat the cycle. 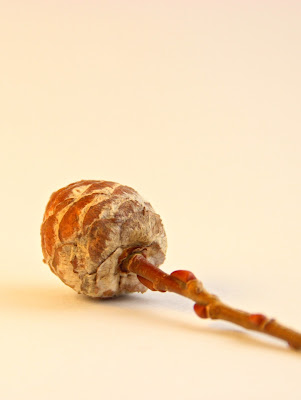 I picked an especially plump gall (above) thinking it was more likely to have a midge developing inside, and put it in a loosely capped jar before I left town.  Four weeks later there were four tiny dead flies, all the same kind, in the bottom of the jar.  I was excited! They looked like the gall midges I found online:

This one was the best preserved of the four flies I found in the jar:
Then it occurred to me:  Why four flies?  Why not just one?  Supposedly the pinecone willow gall midge lays a single egg in a terminal bud.  However, many other insects take up residence in the galls that develop – beetles, caterpillars, sawflies, wasps and other midges.  In fact, in one study 564 insects were reared from 23 pinecone willow galls, and only 15 contained the original host (source).  Maybe these flies were squatters.