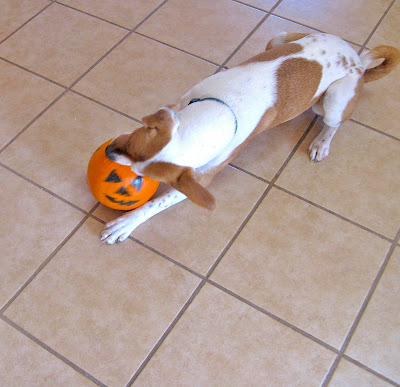 Did you know Jack O'Lanterns evolved from a turnip lantern carried by a rejected soul? More here, from Mental Floss. 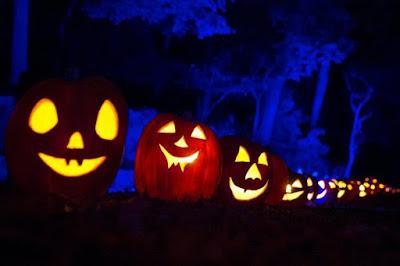 Posted by Hollis at 8:10 AM No comments: 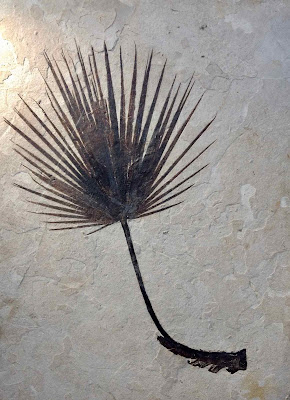 For the second time, bad weather foiled my plan to travel to southwest Wyoming to visit what was once the home of Sabalites—a fossil palm I was following. Just like in mid June, a surprise spell of rain, snow and cold arrived. But this time I knew it would get colder, not warmer, so I'm moving on—choosing another tree to follow for the year to come.

After four years of tree-following, I now have realistic criteria for choosing a tree. Actually, there are only two: easily accessible and dynamic. It needs to be somewhere that I can get to on short notice if necessary, and in whatever weather. And it needs to do things! or be where things happen. There are some impressive conifers not far away, but from our perspective, they hardly change through the year. So I’m considering deciduous trees in or very close to town.
A leading candidate is a boxelder (aka ashleaf maple, 3-leaf maple, Acer negundo) just five minutes from my house. It’s a tough little “street-tree” that manages to survive in the light-industrial / riparian ecotone on the edge of town (ecotone = biological transition zone). This area is vegetated mostly with herbaceous species—Canada thistles, dandelions, tumbleweeds, knotweeds, and such. Most people call them weeds, but really they’re pioneering species able to colonize disturbed sites (like yards). I think they’re under appreciated, which is another reason I’m interested in following this tree. 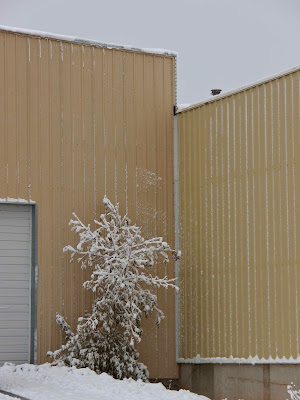 Being deciduous, the boxelder will reveal a lot more about its life than a conifer would—buds, flowers, leaves, changes in color, and surely things I can't predict. The next photos show it at the height of the growing season in 2015. [Recently, the old palettes and trash that accumulated in this nook were hauled off. Hopefully no one will decide to remove the boxelder in the interest of urban renewal!] 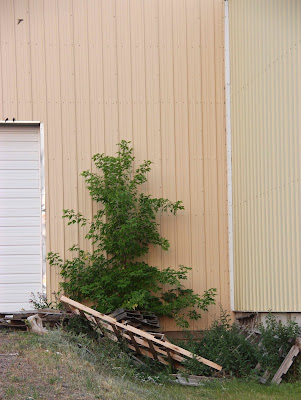 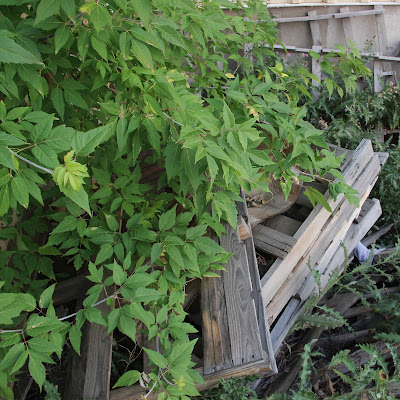 Now, most of the leaves are dead, killed by frost. Interestingly, the few that catch late afternoon sunlight still show signs of life. 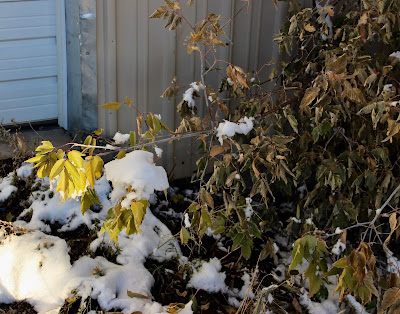 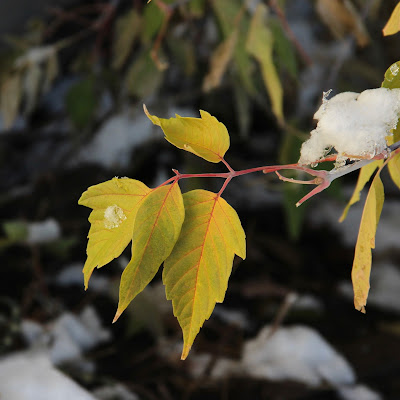 Living where it does, human activity will contribute drama to the boxelder's life—delivery trucks, trash that comes and goes, and, for the next year, road construction. 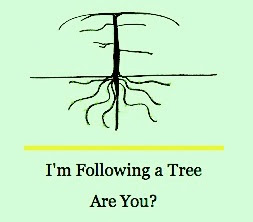 
In my post last week about the impressive junipers at Castle Gardens (near Riverton, Wyoming), I only briefly mentioned the petroglyphs. That was because they deserve a post of their own. They’re fairly famous, in part for their style, which is unusual enough to have a name: Castle Gardens Shield Style. And the site is a poster child for rock art vandalism, most notably because of the missing Great Turtle.


Castle Gardens used to be part of the Love Ranch, where legendary Wyoming geologist J. David Love was born and raised (see John McPhee’s Rising from the Plains). In 1931, while an undergrad at the University of Wyoming, he told eminent archeologist EB Renaud about the petroglyphs, and served as guide during surveys. 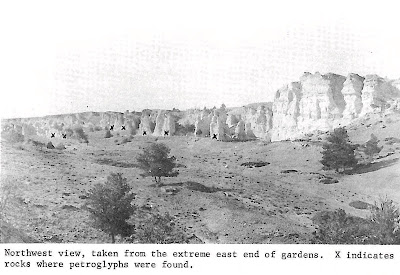 All black-and-white photos are from Sowers (1941). 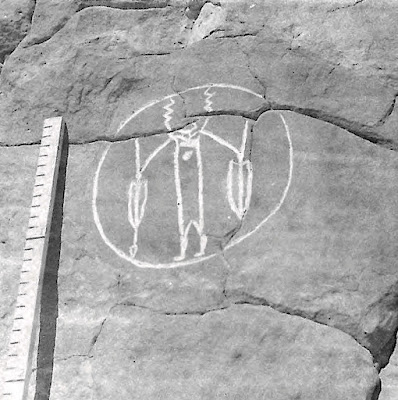 Renaud was impressed with the number and distinctiveness of the petroglyphs. Many incorporate circular “shields” with various designs and objects enclosed in the circles. In some cases, paint was added. We don’t know how often images were painted; only small faded patches and hints of color remain. However, the process of preparing the “canvas” is still discernable. The sandstone face was smoothed, and the weathered outer layer removed, likely with some kind of stone tool. Then the artist created an image by incising narrow lines, perhaps with bone, stone, or antler … or maybe metal if the petroglyphs are as young as some experts think (source).

According to Renaud (1936), the most impressive petroglyph was the Great Turtle:

“It is 16.5314 inches (42 cm) across and also with short outside rays, and in good state of preservation. The figure is very neatly engraved and carefully colored in three shades, the same as the other drawings, green, orange-yellow and purplish-red. … There are 60 such sections, 46 on the elliptical carapace, 13 for the legs and one for the triangular head. The ensemble forms a very attractive polychrome mosaic …”

But by 1940, when photographer TC Sowers traveled to Castle Gardens, the polychrome turtle was gone—chipped out! Supposedly word of the atrocity spread through the region, with threats attached. In any case, a year later the Great Turtle was “anonymously donated” to the Wyoming State Museum in Cheyenne, where it’s part of the Native American permanent exhibit. 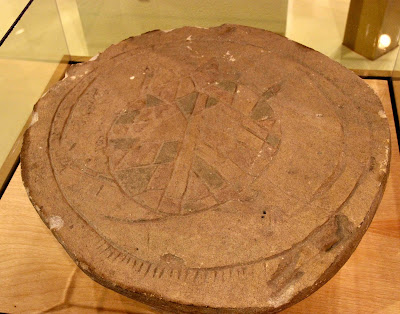 Above, the Great Turtle now resides in a controlled climate at the Wyoming State Museum, along with an “artistic interpretation” of the petroglyph at the time of creation, below. 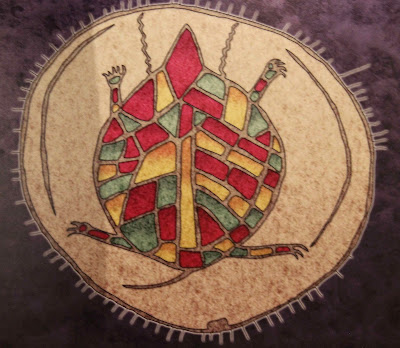 Vandalism continued at Castle Gardens, in part because the site was so remote that vandals could work at their leisure. There have been several attempts at protection. Access to the site was improved in the hopes that more visitation would increase appreciation, and minimize opportunities for destruction. But vandalism continued, and the rise in visitation produced a network of user trails and bare areas. So graveled paths and chainlink fences were added. The fences are an intrusion, no question, but there seems to be no alternative. 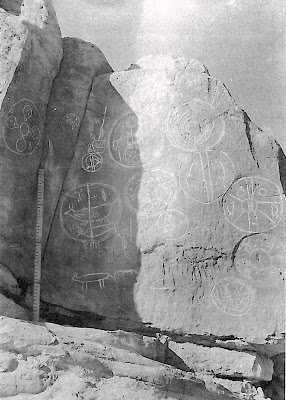 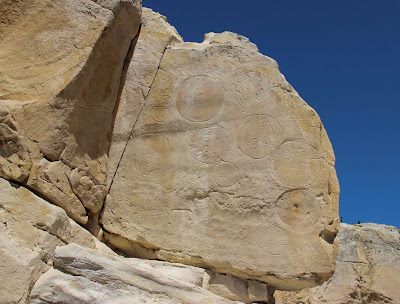 Online, webpage after webpage notes that Castle Gardens are well worth a visit, in spite of the damage and fences. I agree. The petroglyphs are clear to the eye and intriguing to the mind … who made them? and most importantly, why? What were they saying?! After my visit, I searched and read, assuming I would find out. Instead I learned that there are few answers—very few that are generally accepted. But I should have known. How could we possibly read the minds of people long gone?

Rock art is notoriously difficult to date in the absence of paint or a well-developed patina on the rock (for carbon dating), so it’s difficult to say who made it, or whose ancestors. The artists may have come and gone long ago, their artwork being their only lasting legacy. But archeologists keep trying. Renaud (1936) concluded that Castle Gardens petroglyphs were quite old, “in fact prehistoric.” He found no indication of horses or other items that arrived with Europeans. And the Arapaho and Shoshoni Indians living nearby “deny any knowledge concerning meaning and makers …” Others have concluded that the makers were Shoshonean, with ties to modern day Shoshoni culture (e.g., Francis & Loendorf 2002; quoted here).

But many experts object to interpretation based on culture of modern-day (and presumed) relatives. That distant world and the inhabitants it shaped had to have been very different from today. Through what mental constructs did they view reality? What were their needs? Did they hope to discourage invaders, impress cooperators, flatter those in control of the weather and the hunt? Were they temporarily escaping the harshness of daily life? We do that too—we try to shape reality through art, stories, imagination, fantasy. Surely we have that in common with these ghostly beings whom we know only through petroglyphs.


In her article about prehistoric art (The New Yorker, June 23, 2008), Judith Thurman noted that there are two kinds of experts: “those who can’t resist advancing a theory about the art, and those who believe that there isn’t, and never will be, enough evidence to support one.” I’m sure I would be in the latter camp if I were an archeologist. But I’m not. So I'm free to enjoy the possibilities.

One of the more appealing explanations of the Castle Gardens petroglyphs is that they represent trance visions or shamanism. Perhaps these artists were among the select few able to leave the harsh reality of life and cross into other worlds. They recorded their “travels” using images on rock. Maybe hundreds of years later, Shoshoneans discovered them and took them to be magical. Tales grew around them, and were passed down and elaborated to become today’s legends. Maybe we do the same. In the petroglyph below, I immediately saw a celestial alignment—like the total eclipse of the day before! 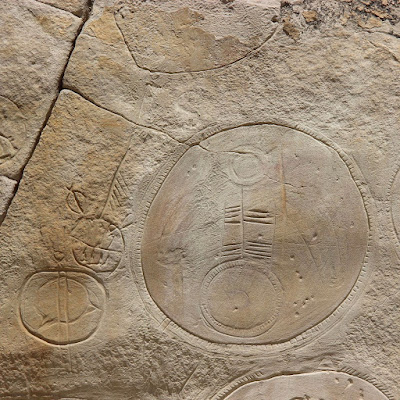 Kelly, RL. 2016. The fifth beginning: what six million years of human history can tell us. University of California Press.