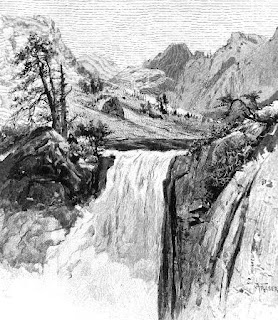 I took off my shoes and stockings and worked my way cautiously down ... the swift roaring flood beneath, overhead, and beside me was very nerve-trying.  I therefore concluded not to venture farther, but did nevertheless.  Tufts of artemisia were growing in clefts of the rock near by, and I filled my mouth with the bitter leaves, hoping they might help to prevent giddiness. -- John Muir

Today, April 21, is John Muir’s birthday.  For readers who might not know him, Muir is considered one of the most important naturalists and conservationists in the history of the USA, playing a major role in establishment of early National Parks and Monuments among other things.  He also was an explorer, a scientist and a writer -- a self-described "poetico-trampo-geologist-botanist and ornithologist-naturalist etc. etc. !!!!"  If alive today, John Muir would be 175 years old ... and a dedicated blogger.
Muir was born in Scotland in 1838.  Eleven years later his father moved the family to Wisconsin.  Muir was struck by how “utterly happy” he felt in “that glorious Wisconsin wilderness” where he learned “wonderful glowing lessons” from Nature rather than the dismal grammar of school.  But there was little time to enjoy it.  Childhood had ended; his days were spent in in hard labor, helping to establish a farm in the wilderness.  At night he would read books on math, poetry, and the adventures of great explorers.
At 22, Muir left home with $15 to his name.  Though largely self-educated, he was accepted at the University of Wisconsin where he studied math, Latin, Greek and the sciences -- especially geology and botany.  He left without graduating, and lived a life of wandering supported by occasional factory work.  Then an accident in a carriage wheel factory left him blind.  He was a tortured man, suffering through dark days and nightmarish nights filled with frightful dreams.

The horror turned out to be temporary.  When his vision returned, Muir was elated.  He declared he would spend the rest of his life in the study of “the inventions of God” -- mountains, snowstorms, streams and lakes, trees and flowers, glacial cirques and polished granite ... the plants and the rocks.

When I discovered a new plant, I sat down beside it for a minute or a day to make its acquaintance and hear what it had to tell ... I asked the boulders I met, whence they came and whither they were going.
Muir headed first for South America, getting as far as Florida and Cuba before illness changed his plans.  He ended up instead in California, where he discovered perhaps the most sublime of Nature’s creations -- the Sierra Nevada, the Range of Light.  He lived in the mountains, exploring, studying, and achieving a nirvana of sorts.

He thinks that I am melancholy and above all that I require polishing.  I feel sure that if you were here to see how happy I am and how ardently I am seeking a knowledge of the rocks, you could not call me away but would gladly let me go with only God and his written rocks to guide me.

His ardent seeking would result in seven essays on the glaciology of the Sierra Nevada -- Studies in the Sierra (1874-75).

In 1880, Muir married and settled down ... sort of.  He successfully ran the family farm in Martinez, California, and yet managed to be gone many months each year, tramping through the Sierra Nevada, Alaska, Siberia, and whatever wild place interested him.  At 73 he set out alone for South America.  He still had not seen the Amazon, “the Earth’s greatest river” and the destination of his aborted trip fifty years earlier.  After traveling the river, he continued on to the Andes, Africa and points beyond.

And Muir wrote.  Though he sometimes spoke disparagingly of writing, it seems he couldn’t not write.  His literary legacy is considerable, fortunately.  One of Muir’s books, My First Summer in the Sierra (1911), had a very powerful effect on me early on, fueling an intense desire to wander through California’s mountains.  Reading Muir, I knew I too wanted to tramp through rocky high country, getting to know the trees, birds, rocks, finding adventure among lakes and peaks.  When I finally had the opportunity to do so, the experiences were as wonderful Muir had promised.  Forty years later I find his writing just as inspiring as I did then ... especially now that I’m something of a "poetico-trampo-geologist-botanist and ornithologist-naturalist etc. etc. !!!!" myself.

Let’s get to know John Muir a little better and share some of his experiences ... through his own words and also his sketches, often as charming as his prose.

This tree is remarkable for its airy, widespread, tropical appearance, which suggests a region of palms, rather than cool, resiny pine woods. No one would take it at first sight to be a conifer of any kind, it is so loose in habit and so widely branched, and its foliage is so thin and gray.


The most influential of the grasses composing the sod is a delicate calamagrostis with fine filiform leaves, and loose, airy panicles that seem to float above the flowery lawn like a purple mist. But, write as I may, I cannot give anything like an adequate idea of the exquisite beauty of these mountain carpets as they lie smoothly outspread in the savage wilderness. What words are fine enough to picture them? to what shall we like them? The flowery levels of the prairies of the old West, the luxuriant savannahs of the South, and the finest of cultivated meadows are coarse in comparison.

Then I went above to the alphabet valleys of the summits, comparing cañon with cañon, with all their varieties of rock-structure and cleavage and the comparative size and slope of the glaciers and waters which they contained; also the grand congregations of rock-creations was present to me, and I studied their forms and sculpture ... The grandeur of these forces and their glorious results overpower me and inhabit my whole being. Waking or sleeping, I have no rest. In dreams I read blurred sheets of glacial writing, or follow lines of cleavage, or struggle with the difficulties of some extraordinary rock-form.


When I had scrambled to the top of the moraine, I saw what seemed a huge snow-bank four or five hundred yards in length by half a mile in width. Imbedded in its stained and furrowed surface were stones and dirt like that of which the moraine was built. Dirt-stained lines curved across the snow-bank from side to side, and when I observed that these curved lines coincided with the curved moraine and that the stones and dirt were most abundant near the bottom of the bank, I shouted, "A living glacier."

He is a singularly joyous and lovable little fellow, about the size of a robin, clad in a plain waterproof suit of bluish gray, with a tinge of chocolate on the head and shoulders. In form he is about as smoothly plump and compact as a pebble that has been whirled in a pot-hole, the flowing contour of his body being interrupted only by his strong feet and bill, the crisp wing-tips, and the up-slanted wren-like tail.

At times, Muir’s writings suggest ecstasy ... in a man possessed by the beauty, thrill, fascinating complexity and consuming mysteries of nature.  Though extremely analytical and dedicated to scientific understanding, he also wrote from the perspective of a mystic.

I have stood by a majestic pine, witnessing its high branches waving "in sign of worship" or in converse with the spirit of the storms of autumn, till I forgot my very existence, and thought myself unworthy to be made a leaf of such a tree.
The mountains are fountains of men as well as of rivers, of glaciers, of fertile soil. The great poets, philosophers, prophets, able men whose thoughts and deeds have moved the world, have come down from the mountains - mountain dwellers who have grown strong there with the forest trees in Nature's workshops.

Reading John Muir, I sense an intense desire to communicate, the same kinds of feelings and motivations that we find drive us to blog.  Muir wrote in part to campaign for protection of the wild lands that he loved.  In article after article -- blog posts of the day -- he put the glories of wilderness on display.  He wanted the public to know how special these lands are.  He wanted to persuade everyone that these wonderful natural areas should be protected, rather than sacrificed for short-term gain -- to the mining, timber harvest and livestock grazing that were decimating them as he wrote.

Muir would have loved science blogging, for presenting and discussing his theories on the glacial origins of Yosemite Valley for example.  As Anne Buchanan explains “Blogging carries information, but with a much more immediate sense of the excitement, and the controversies, that scientific discoveries involve.” (see Galileo was a blogger) 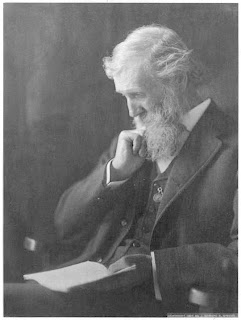 I think there was something else in Muir that compelled him to write so profusely in his expressive lyrical style ... something that would have found a deep satisfaction in the blogosphere.  I believe he was so excited and taken by the natural world that he wanted to share his experiences and feelings, especially with his close friends ... but also with anyone who would listen and perhaps be persuaded to see wilderness as beautiful, fascinating, necessary, and reflective of the wondrous hand of God.

As long as I live, I'll hear waterfalls and birds and winds sing. I'll interpret the rocks, learn the language of flood, storm, and the avalanche. I'll acquaint myself with the glaciers and wild gardens, and get as near the heart of the world as I can.

Sources
Sierra Club.  The John Muir Exhibit.  This is the place for more on Muir -- biographical information, books and other writings (many available online), photos and more.