First there is a mountain ... or was it a river?

On a warm September day last year, I took a beautiful drive on State Highway 62 through Kingston Canyon, where the East Fork of the Sevier (suh-VEER) River flows across the high Sevier Plateau from east to west (click on photo below for a better view). 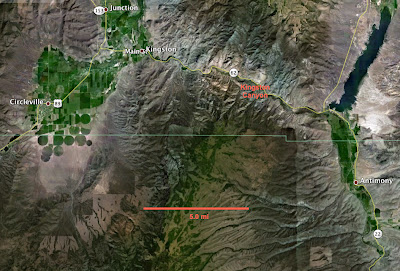 Some might think it odd for a river to flow into an uplift and back out again, and there was a time when I too thought that rivers started high in the mountains and flowed down to meet other streams, eventually reaching the lowlands.  But now I know that in the American West it’s not all that uncommon for a river to cross a mountain range.

How does such a counterintuitive drainage pattern come to be?  There are two possible explanations that I know of.  One is “first-there-is-a-mountain” or the super(im)posed drainage hypothesis.  A mountain range is buried by deposits -- alluvial fans, basin fill, etc. Then at some point, streams flowing on the surface cease to deposit sediment and begin to erode instead.  If such a stream reaches the buried mountain range, it may cut into it as well.  Eventually erosion exhumes the old range.  In other words “First there is a mountain, then there is no mountain, then there is” (Donovan 1967) ... but now with a river flowing through it. 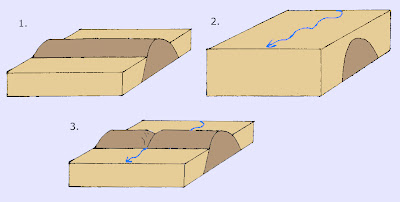 Above -- a superposed drainage.  1. A mountain range ... 2. is buried by basin fill.  Streams flow on the surface.  3. Streams become rejuvenated (for reasons we won’t discuss here) and start eroding and removing the fill, reaching the mountain range and cutting into it as well.  The mountain range is exhumed, with a river crossing it.

An alternative explanation is “first-there-is-a-river” or the antecedent drainage hypothesis.  A river happens to be flowing across a surface fated for uplift.  If uplift is sufficiently slow, the river can keep pace, eroding down rather than being blocked or diverted.  Most likely this is why the East Fork of the Sevier River flows across the Sevier Plateau via Kingston Canyon (Rowley 1981).

Above -- an antecedent drainage.  1. Streams and rivers flow across the land, antecedent to uplift.  2. With tectonic activity (extension in the case of the Sevier Plateau) a block is uplifted ... but slowly enough that a stream can maintain its course via erosion.  3. A river runs through the uplift.
The Sevier Plateau is part of the High Plateaus subprovince of the Colorado Plateau, a transition zone between the Plateau and the Basin and Range country to the west.  It has been a region of uplift and downwarping due to Great Basin extension starting 30 million years ago or so.  The block making up this part of the Sevier Plateau has tilted gently to the east, displaced vertically more than 1500 m (5000 ft) along the Sevier fault zone on the west side (Rowley et al. 1981).  At the same time, the East Fork of the Sevier River has cut into the rising land to create one of the deepest antecedent canyons in the High Plateaus area (to 1200 m or 4000 ft). 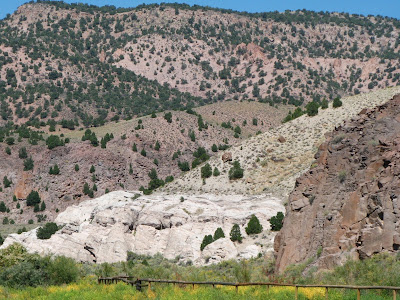 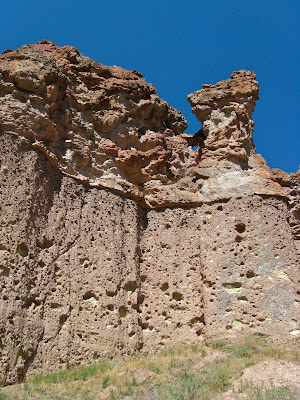 Rocks exposed in Kingston Canyon are predominantly volcanic, mainly rhyolites deposited ca 30-22 million years ago.  They came from the huge Marysvale volcanic field, which was on the order of 100 km across.  Younger rhyolites (ca 5 million years) are present as well, and there are similar-aged basaltic lava flows on the northern rim (Rowley 1981). 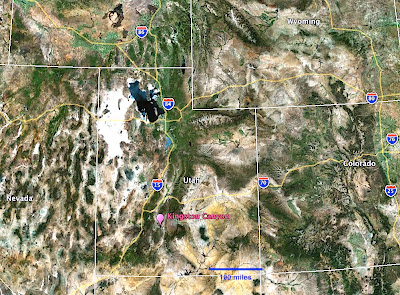 Kingston Canyon has accommodated travelers for a long time.  In the early 1800s it was part of the popular Fish Lake cutoff on the 1200-mile Spanish Trail, a trade route between the Pueblo de Los Angeles in California (then part of Mexico) and Santa Fe, New Mexico. This shortcut through the high country saved 72 miles, and offered fish, grass, water and a cool respite from the lowlands in summer.  And sure enough ... near the west end of Kingston Canyon I met up with a ghostly traveler from California, en route to Santa Fe to trade horses and cattle for woolen rugs, blankets and serapes. 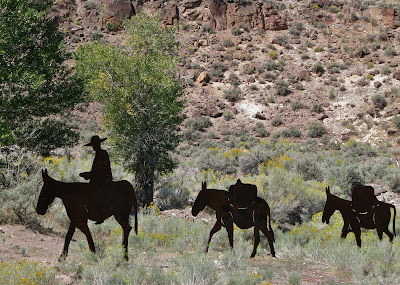