A Buttercup Worthy of its Name

Very few of our wild buttercups look like cups of butter.  There might be a flash of yellow if one catches a glimpse of the small flowers, but as Claude Barr wrote, “If one has known buttercups in all the happy connotations of the name, one quickly looks elsewhere.” (Jewels of the Plains, 1983, Univ. MN Press). 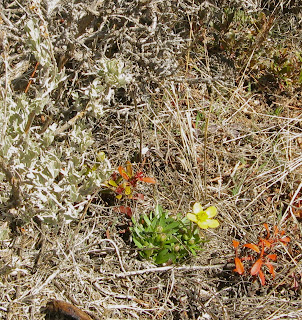 The sagebrush buttercup is an exception.  Its flowers are bright and glossy and large enough to qualify as showy, especially considering when it blooms -- early spring when everything else still is gray and brown.
Buttercup petals are lustrous because “The epidermal layer of cells has not one but two extremely flat surfaces from which light is reflected. One is the top of the cells, the other exists because the epidermis is separated from the lower layers of the petal by an air gap. Reflection of light by the smooth surface of the cells and by the air layer effectively doubles the gloss of the petal ...” (from Science News -- Why Buttercups Reflect Yellow On Chins).
Sagebrush buttercup is atypical in other ways ... such as its habitat.  Most buttercups prefer moist-to-wet areas, hence the Latin name Ranunculus meaning “little frog”.  But this one grows on dry sites, though often close to protective shrubs (maybe more snow accumulates there).
Sagebrush buttercup leaves are unusual too.  Another common name for buttercups is “crow’s foot” -- for the deeply-lobed leaves.  But sagebrush buttercup has basal leaves that are entire or shallowly-lobed at most. 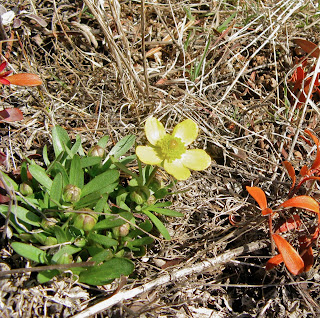 We found these flowers while hiking on a beautiful spring day last week.  Now five days later we're in the midst of a blizzard.  In the Laramie Mountains it's 3º F and snow is falling. What are the sagebrush buttercups doing?  Probably they're hunkered down, protected by snow accumulating beneath the sagebrush.  I bet we'll see them again in just a few weeks, in full bloom. 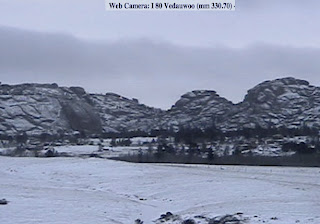 Above and below -- sagebrush buttercup weather report
(courtesy Wyoming Department of Transportation).