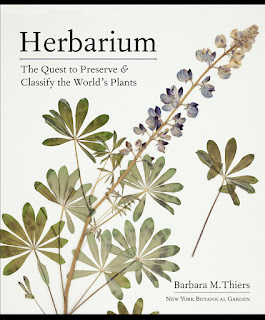 In the early 1980s, Barbara Thiers, Director of the William and Lynda Steere Herbarium (NY Botanical Garden), and 15 other prominent botanists were asked to come up with a timeline for the history of herbaria. But in spite of centuries of combined education and experience, they failed. They couldn't agree on mileposts, and soon realized how little they knew!
You, however, can avoid this situation if you read Thiers's book: Herbarium: The Quest to Preserve and Classify the World's Plants (2020). As well as being edified, you will be much entertained as you travel from the first herbarium—a modest book—to today's 3300 institutions spread across the globe, home to 390 million dried pressed plants.
Herbarium?
Probably there are readers who are unfamiliar with herbaria (plural for herbarium). But rather than resorting to a definition, let's start with their birth, proceed through their development, and ponder their future. That will be far more interesting!
It's thought that botany professor Luca Ghini, of the University of Bologna, invented the herbarium in the 1520s, during the exciting early days of the Italian Renaissance. He wanted a better alternative to standard botanical pedagogy, lectures based on Discorides's De Materia Medica (above), first published in 65 CE. So Ghini brought fresh plant material to class. Many more details could be seen, making identification much easier and endearing him to his students.
Ghini had another brilliant idea—a "hortus hiemalis" or "hortus siccus" (winter or dry garden), now known as "herbarium". This was a collection of dried plants suitable for study in winter. Each plant was carefully arranged in a natural pose between sheets of paper, and placed under weights to press it flat. When fully dry, plants were glued to blank pages in a bound volume, a book herbarium.
A century later, plant collecting had become popular enough that naturalist John Woodward saw fit to publish Brief Instructions for Making Observations in All Parts of the World, as also, for Collecting, Preserving, and Sending Over Natural Things (1669). His title hints at a cause of the increase: European ships were crossing the seas in global exploration. Plants were of great interest, being sources of valuable commodities such as food, flavorings, fine woods, fiber and dye, and seeds and plants for the garden. Usually there was a botanist on board.
Woodward's instructions weren't all that different from today's. Collectors should select plants suitable for identification. "Chuse all these Samples of Plants when they are in prime, I mean in Flower, Head, or Seed, if possible; And if the lower or ground Leaves of any Plant be different from the upper leaves, take two or three of them, and put them up along with the Sample" (more here). Plants should be pressed soon after returning to camp (or the ship), to preserve structures, and possibly color, after carefully arranging them so that parts don't overlap.
Field botany—not for the faint of heart
At this point, Thiers's book takes on a new character—many, actually. The history of herbaria would be as dry as the specimens they contain if we ignored the characters who collected them. Or, as the author says, "the sometimes odd and loveable people who have helped build the world's herbaria."
Englishman William Dampier was a pirate, privateer (authorized pirate), navigator, naturalist, and all-round adventurer. In 1699, he was placed in command of the rickety 9-year-old HMS Roebuck, and directed to sail to the east coast of New Holland (Australia) to collect herbarium specimens, among other things. After rounding the Cape of Good Hope, Dampier traveled to western Australia and nearby archipelagos, where he found many plants of interest.
But then just 100 miles from Australia's east coast, his intended destination, he was forced to turn back, for the Roebuck was in serious disrepair. The trip home was no fun. Among other things, the ship sank, stranding Dampier and his crew on Ascension Island for five weeks. Most of his specimens were lost.
Several preeminent botanists studied and classified those that survived, giving them Latin(ized) names as we do today. But these names were intended to be descriptive, with enough words to distinguish the new plant from its (presumed) relatives, for example, "shrubby long-leaved horsetail of New Holland" (image below). As more plants were discovered, the names got longer.
Have another look at this image. The plant lower right is Mohoh Insulae Timor, described by Dampier as "a very odd Plant, agreeing with no describ'd genus." Any ideas what it might be? You can study the specimen here, courtesy Oxford University. Notice both the well-preserved 320-year-old plant, and the many annotation labels added, as later botanists tried to identify it.
A quiet interlude
The original names of Dampier's plants would be abandoned just 50 years later, thanks to another memorable character—not so much a traveler but an intellectual adventurer. In 1753, Carl Linnaeus published Species Plantarum, establishing a naming system still in use. With no aspirations for description, he limited names to two words: genus and specific epithet. So Equisetum Novae Hollandiae frutescens foliis longissimis became Casuarina equisetifolia (not a horsetail but a whistling pine). However, of greater interest to us are Linnaeus's contributions to "botanical infrastructure" as Thiers calls it.

Linnaeus's innovations weren't limited to botany. For example, he's thought to be the inventor of index cards. In compiling information about various items, it's far better to write on cards that can be intercalated and rearranged, rather than on pages fixed in a book. Linnaeus applied this principle to herbaria as well, mounting plants on paper sheets, and then filing them with related specimens. Thus the collection was kept ordered by species, genus and family as new specimens were added.
More colorful characters
From Linnaeus's quiet study, Thiers returns to the high seas of the 18th century, traversed by botanical adventurers obsessed with plant collecting and discovery. Given the many dangers and challenges, it's not surprising they were a tough and quirky bunch.
Consider Jeanne Baret—a French peasant, highly-skilled "herb woman" and one of two naturalists on the Bougainville expedition (1766-1769). This was the Age of Enlightenment; reason and "philosophy" (today's science) were highly valued. Is this why there were two botanists on board? Not at all; Baret had snuck on! The French navy banned women from ships, as they were sure to bring bad luck.
However, being lovers and sharing a passion for plants, Baret and chief botanist Philibert Commerson were inseparable. So she dressed as a young sailor, took the name of "Jean", and showed up on the dock, where Commerson went through the motions of interviewing and hiring her him as assistant. They sailed west to South America and rounded Cape Horn, stopping periodically to explore and collect. Next, they crossed the Pacific, landing in Tahiti malnourished and suffering from scurvy. After a pleasant period of recovery, they continued west for more exploration and collecting.
Commerson proved to be frail and unhealthy, so Baret did most of the field work, "hiking long distances in pursuit of plant specimens while carrying a musket, a supply of food, and a field press and paper for the press." She managed to conceal her true sex for much of the journey, possibly by declaring herself a eunuch. But by the time they arrived in Mauritius, she was noticeably pregnant. I will leave it to Thiers to tell the rest of Baret's remarkable adventure.
An especially admirable field botanist in my opinion was the priest, mathematician, naturalist, artist, and physician José Celestino Mutis. Born and educated in Spain, he spent most of his life in New Granada (northern South America). In 1783, after campaigning for twenty years, Mutis persuaded Spain to fund botanical exploration. The project would last 34 years, cover 50,000 miles, yield 24,000 collections, and earn him appointments to prestigious European scientific organizations thousands of miles away.
For his botanical illustrations, Mutis trained, employed and credited indigenous artists. Their style was distinctive, both beautiful and technically accurate. Sympathetic to the Revolution (against Spain), Mutis wanted these illustrations, along with his papers and specimens, to remain in Bogotá. But that was not to be. Somewhere along the way, his specimens were destroyed. Or so it was thought ...

Thiers mentions Alexander von Humbolt and other well-known explorer-naturalists only briefly, instead focusing on the under-appreciated, for example English botanist Richard Spruce. He spent 11 years in South America, in lowlands and mountains, often traveling alone. In the Andes of Ecuador, he collected seeds and plants that launched Cinchona (quinine) plantations in south Asia, to the great benefit of malaria sufferers. But Spruce's true love was liverworts (Hepaticae in his day). He studied them until his death, struggling in poor health to observe and describe their minute details.

"It is true that the Hepaticae have hardly as yet yielded any substance to man capable of stupefying him, or of forcing his stomach to empty its contents, nor are they good for food; but ... they are infinitely useful where God has placed them, as I hope to live to show; and they are, at the least, useful to, and beautiful in, themselves—surely the primary motive for every individual existence."

In spite of being enamored with with the great 19th-century naturalists of North America, I now jump ahead to China, part of Thiers's tour of herbaria beyond Europe and the United States (she also includes Australia, Brazil and South Africa). But first, consider this mystery: Why is it that in spite of thousands of years of accumulated plant knowledge in China, long predating that of Europe, herbaria there were so long in coming? Why were Europeans the first to preserve dried plants for study? Thiers has a theory, but only a theory. Any ideas?

The earliest surviving Chinese plant book is a 2500-year-old herbal (above, top). It contained accurate descriptions and illustrations, as well as information about cultivation and medicinal use. New editions were printed roughly every century, expanded to include more plant species and updated knowledge. So when the Europeans arrived, they found both new (to them) plants and lengthy written accounts about them. This led to trouble.

Soon Britain traders, already established in India, were determined to gain access to the Chinese interior with its many valuable plants. The led to the notorious Opium War, and the establishment of British stations across China. Plant collectors went crazy. For example, physician Augustine Henry, with the Imperial Customs Service, collected 15,000 specimens in 15 years, representing 5000 species of which 500 were new to [western] science.

After the abdication of the last Chinese Emperor in 1912, botany (and science in general) progressed rapidly, including establishment of the first Chinese herbarium in 1915. But during World War II, many specimens were destroyed or stolen. Botany and prominent botanists suffered greatly during the Cultural Revolution as well.

But recovery was rapid! China now boasts 361 herbaria holding 20 million specimens, which are steadily being digitized. The 80-volume Flora Reipublicae Popularis Sinicae was completed in 2004. An English version, a collaboration between the Institute of Botany in Beijing and the Missouri Botanical Garden, was completed in 2013 and is now available online at efloras.org.

What does the future hold?

Thiers ends her book by promoting herbaria and their many uses, and by pondering their future—very much a relevant issue for Wyoming plant lovers currently. In case you haven't heard, the state of Wyoming is to receive a big chunk of Federal stimulus money. There's talk that some of it will be used to enlarge the Rocky Mountain Herbarium at the University of Wyoming! Fingers crossed!!

Herbarium: The Quest to Preserve and Classify the World's Plants, by Barbara Thiers, is available in print or digital format at the standard outlets. Originally priced at $40 and $17, prices for the print book are dropping, so shop around.

Email ThisBlogThis!Share to TwitterShare to FacebookShare to Pinterest
Labels: herbarium, history of botany