No surprise—the boxelder I’m following hasn’t done much since my report a month ago. But I took photos anyway. It’s a nice-looking young tree, with a canopy that should be full when it leafs out, probably in May or June. 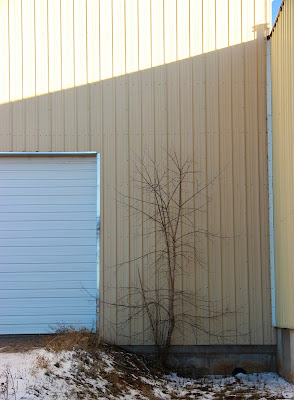 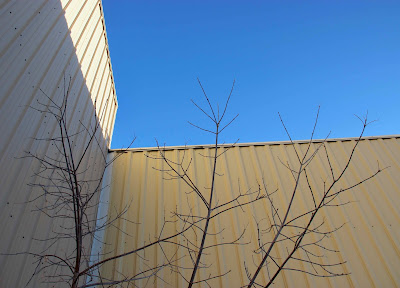 The nook where it grows faces north and west, and gets little if any direct sun this time of year (I don't know because I never go there midday). So maybe the boxelder hasn’t been mislead by our "spring" weather—day after day with highs in the 40s F. This is quite mild for Laramie in December, at 7000 feet elevation in the continental interior. Prairie grasses in my yard are greening up, and some annual weeds have germinated and are growing. Maybe they'll die when true winter arrives, and I'll be weeding less next year (hah!). 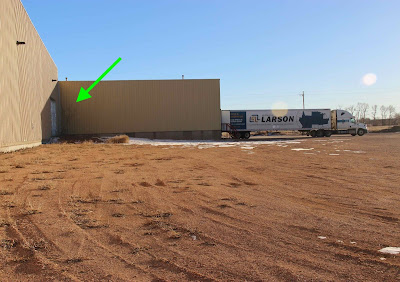 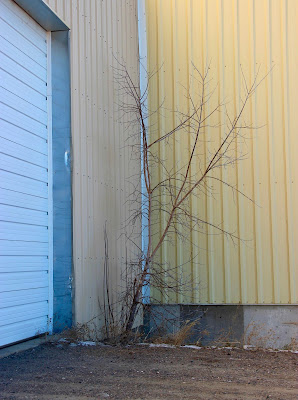 Below the boxelder I did find changes—in accumulated trash. The inspirational message from last month was gone, with nothing particularly interesting replacing it (unless you are inspired by brake parts cleaner). Note persistent snow in the shade. 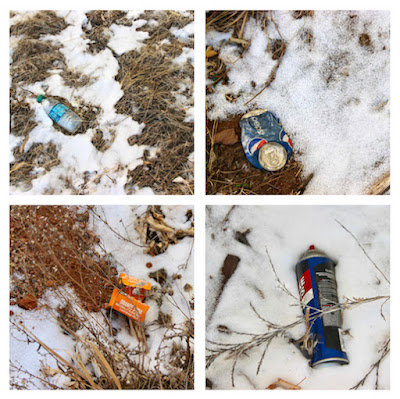 Meanwhile, there were major changes in the road construction project that I walk through every morning with my dog, and whenever I visit the boxelder. Last month, as I wrote my post, the Gomaco 6300 was being fired up to start on the bike path. Now it's done except for the section over the new bridge, which will go in next spring or summer. Though the road is closed to traffic, we can walk on it on weekends. 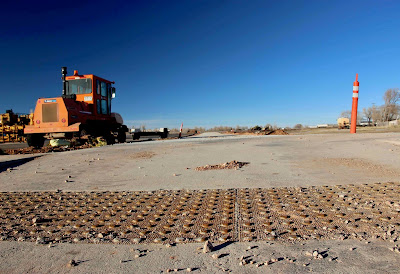 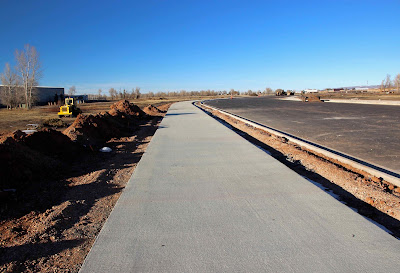 The Gomaco 6300 truly is amazing! In laying the bike path, a concrete truck poured concrete ahead of it (between form boards) as it moved forward very slowly, vibrating and leveling as it went. Several workers followed, filling any low spots. Even more impressive, it can squeeze out curb-and-gutter! Concrete is poured into the machine, and out comes curb-and-gutter through a nozzle-like thing—like decorating a cake!! 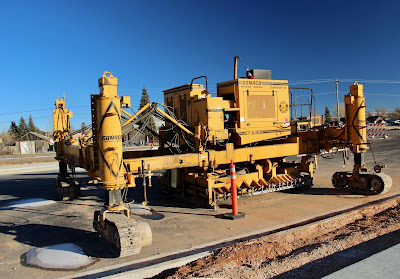 The next day, after bike-path or curb-and-gutter work, three guys with big heavy saws cut joints. I have it on good authority (my brother, see note at end of post) that cut joints are prohibited in California, as sharp corners flake or spall with time. Instead, a large crew follows the machine, forming joints in the fresh concrete. But not in Wyoming, apparently. However, we do require major joints with expansion board, as in California.
This road construction is underway (finally!) because we badly need a new bridge over the railroad tracks that split our town. I suppose construction of the bridge itself is far more complex and interesting than bike paths and curb-and-gutter, but I rarely see it. One of these winter months, while the boxelder is still “asleep”, I will include a bridge update in my monthly “tree” following report.

Note  My brother, in California, started his career as a concrete mason. Now, after 40 years, he supervises commercial projects with lots of concrete. He’s also a wonderful storyteller, so it’s not surprising that we had a 45-minute conversation about concrete adventures when I called to talk curb-and-gutter machines :-) 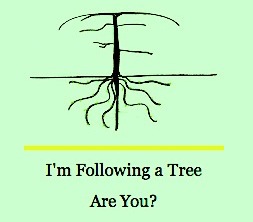 Many thanks to Pat of The Squirrelbasket for hosting our monthly tree-follower gatherings. Check out the latest news. Want to join us? More info here.