[Many thanks to Larry Haimowitz for this contribution! See bio at end of post.]
If you’ve ever driven west from Laramie to Centennial on Wyoming Highway 130 you’re likely familiar with this scene – that’s Sheep Mountain on the left. Most of the mountain is National Forest, but is surrounded by private property, which limits public access. You’ll find a very steep trail, just out of sight in this photo, near the NW corner of the mountain. Parking is very limited and there is no sign at the trailhead. Trails from the south end of the mountain have much gentler slopes.

Hiking Sheep Mountain, you can easily see half of all the kinds of cacti that grow in Wyoming. That’s not as impressive as it sounds: there are only seven species of cacti in the state (1, 2), three of which are certainly present on the mountain, and a fourth one that might be, though I haven’t found it yet. The most common of these are Opuntia polyacantha and Pediocactus simpsonii. The third, much less abundant, is Escobaria vivipara. You won’t have to walk more than a half mile from the trailheads at either end of the mountain to come across these three cacti, though you will have to look carefully to encounter E. vivipara. The fourth cactus, Echinocereus viridiflorus, if it is present, will be found around the base and lower slopes of Sheep Mountain.

For the most part, cacti on Sheep Mountain are solitary plants, spaced well apart from each other. Several years ago, I found an area so thick with cacti that I think of it as the cactus field of Sheep Mountain, and I think there are more just like it. I first discovered that place on a cold November morning. 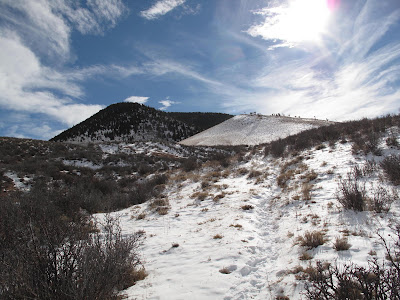 A very steep trail starts from the NW corner of Sheep Mountain (above). On that particular morning, my faithful dog Tookie and I followed the fence that marks the western boundary of the National Forest (below). 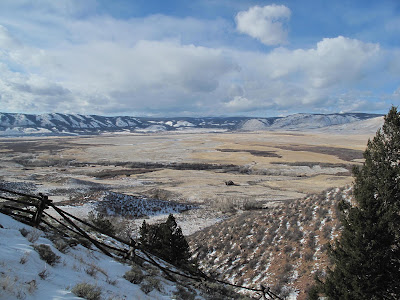 The higher we went, the deeper the snow got. 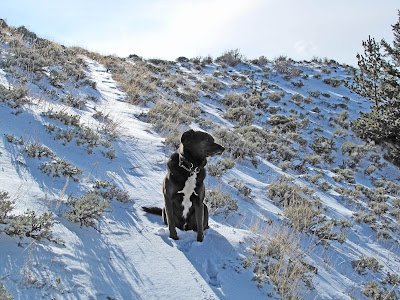 After a while, we reached a windswept ridgeline, free of snow, and we started up the ridge because it was so much easier than walking in the deep snow. The ground was uneven and rocky underfoot, so I was constantly looking down to be sure of my footing. After what seemed like a long climb, I noticed something odd - little round balls of spines everywhere beneath my feet! Pediocactus simpsonii, so close together that it was hard to avoid stepping on them. There it was! A cactus field, a dense colony of Simpson’s ball cactus, covering several acres, something I’ve never seen the likes of.

Wind-blasted and sunbaked, with sparse, rocky soil, this highly exposed ridgeline looks like the most unlikely place for a plant to thrive. Oddly, in richer-looking habitats, Pediocactus is thinly scattered. I suspect that these cacti don’t like “wet feet” and need at least some full sun for development. The ridgeline would have better drainage and less competition from plants that shade the cacti. 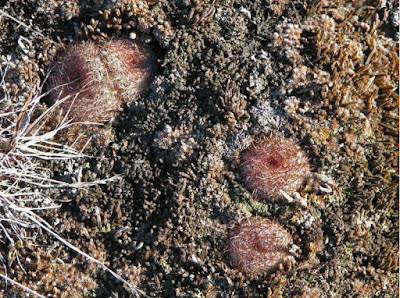 This is what the plants looked like (above). Dormant for winter, they have lost water and shriveled to the ground to protect themselves from freezing, a common strategy for winter-hardy cacti. (Photo by Zoltan Kerner.) 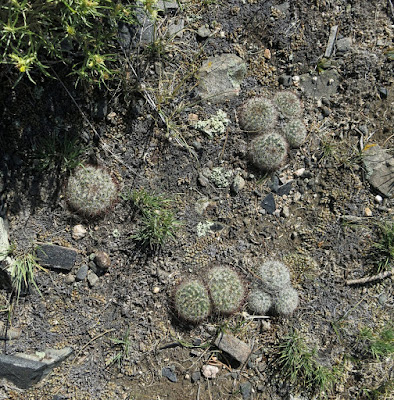 In the spring, the plants imbibe water and fatten up to prepare for flowering and growth. This is what they look like during the growing season. Plants may grow as single stems, rarely more than 4 inches in diameter, or clusters of two or more stems. Simpson’s ball cactus is the most abundant cactus on the mountain, and is widespread all over Wyoming and the intermountain west.
Pediocactus simpsonii is one of three kinds of “ball” cacti in Wyoming that bear their spines on tubercles (also called nipples), which are easily seen in the photo above. The other two similar ball cacti belong to the genus Escobaria (1). 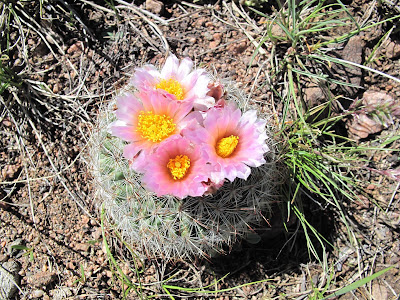 In our area, the plants start to bloom at the end of April and flower through the month of May. Flowers are about an inch across. Pink is the typical color, but there are occasional plants with white flowers. 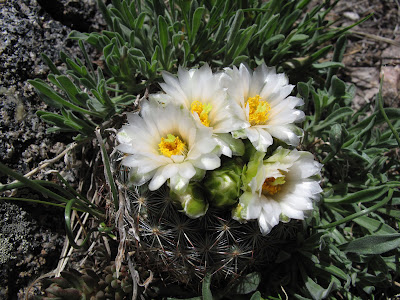 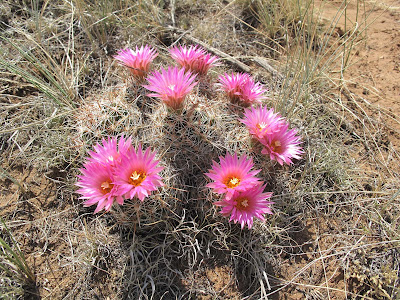 Locally, Escobaria vivipara blooms later in May and into June, with flowers up to 2 inches across. Like Pediocactus, it grows as solitary plants or as clusters of stems, with each stem not more than a few inches in diameter, and it is also found over much of western North America.

How to tell the ball cacti apart:  The plants are easiest to tell apart when blooming. Escobaria vivipara has larger flowers with narrower petals, but this is not always a reliable character. A more definitive character is the origin of the flower buds. Flowers appear at the top of the plant in both of these genera, but on different parts of the tubercle. In Pediocactus, the flowers form on the tubercles next to the spines. In Escobaria, the flower buds are formed in the bottoms of the valleys between tubercles, far from the spines (1). 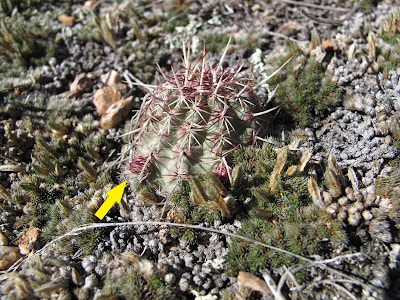 This is another small ball cactus, easily distinguished from the other two by spines that are born on ridges (referred to as ribs) instead of tubercles. Also, the flower buds develop lower on the plant instead of at the top (Yellow arrow pointing to rib with a flower bud). The green-flowered hedgehog cactus is found in the western Great Plains to the Rocky Mountains, from Texas and New Mexico to South Dakota and Wyoming.

The closest (to Sheep Mountain) recorded distributions of this plant are in the Laramie Range a little less than 20 miles east of Laramie (specimen here), and I have also found this plant to be abundant near the old stage stop of Virginia Dale, Colorado, 30 miles to the south. I have never seen Echinocereus viridiflorus on Sheep Mountain, but I suspect it may be present on the lower slopes. If you see it, I would love to hear from you. 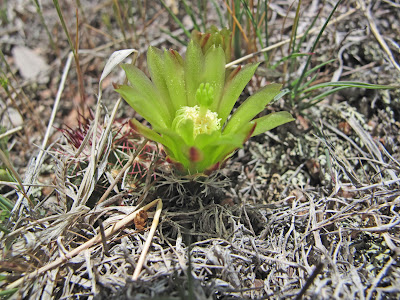 The plant bears greenish-yellow flowers (hence the species name viridiflorus, meaning green-flowered) about an inch across in late May or early June. Notice how difficult it is to see the top of the plant, which is to the left of the flower – when not in flower, these ball cacti are often well camouflaged.

Cacti of Sheep Mountain: Opuntia polyacantha (Plains Prickly Pear)
Plains prickly pear is very common in grasslands all over the state of Wyoming. It is considerably less abundant on Sheep Mountain than on the prairie, but is still quite easy to find. Opuntia polyacantha has one of the widest distributions of any cactus in North America, ranging northward from Texas all the way to Saskatchewan, and westward to British Columbia and Southern California. Like many wide-ranging prickly pears, this is a species that displays extreme variability in appearance in different regions. 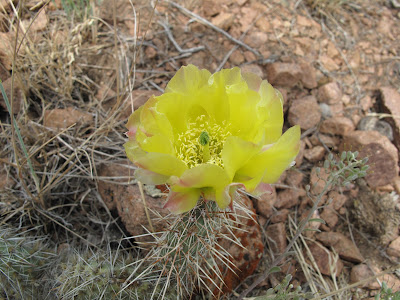 Opuntia polyacantha blooms in June to early July in our area. The showy flowers are around 2 to 3 inches across and are usually a shade of yellow.

And now for the Rest of the Cacti of Wyoming

The three species of Wyoming cacti that are not found on Sheep Mountain include two prickly pears (Opuntia fragilis and Opuntia macrorhiza) and one ball cactus (Escobaria missouriensis). In Wyoming, Opuntia fragilis is known from Sweetwater County; Opuntia macrorhiza is known from the Great Plains and the Black Hills in eastern Wyoming; and Escobaria missouriensis is also known from the Great Plains and Black Hills, as well as Park County (1). More information about these species is easily found by searching the USDA Plants Database.

A Final Word on Cacti in Wyoming

If you consult Dorn and Dorn (1), you will find that they include an eighth species of cactus in Wyoming, Opuntia erinaceae, but I just told you that there are only seven species. Don’t be alarmed, Wyoming hasn’t lost Opuntia erinaceae since the Vascular Plants of Wyoming was published. It’s just that more recent taxonomic work has shown O. erinaceae to be a variety of O. polyacantha (2). Those wily Botanists!

Larry Haimowitz is working on a graduate degree in entomology at the University of Wyoming, after retiring several years ago. His love of bugs, and all things in nature, goes back to his childhood on a farm. Now he carries a camera pretty much everywhere he goes, and intends to “keep on hiking, backpacking and climbing mountains until the day I die - but just a little bit slower each year.”