It’s such a treat to meet and get to know the early pioneering botanists of the American West! Of course it doesn’t happen often. They don’t attend meetings nor visit herbaria, at least not during the light of day. And I can’t just zip off an email explaining my interest in their work. Why? Because, unfortunately, they’ve all been dead for years.

But occasionally they speak to me through some relic—a plant specimen, a field book, a letter. I post about these encounters in my Letter to the Earth series. The most recent was with PA Rydberg, through his map of Yellowstone National Park.

In 1898, Professor Rydberg of Upsala College in Roselle, New Jersey, was preparing a Catalogue of the Flora of Montana and the Yellowstone National Park. He was in frequent correspondence—on the order of one letter per month—with Professor Aven Nelson at the University of Wyoming, who was collecting plants to document the regional flora. It was a wonderful time and place to be a botanist. So many discoveries awaited—first reports of species from the region, and even novelties (species new to science). Nelson and Rydberg discussed at length plant identification and classification, and the validity of various novelties.

Studying Rocky Mountain plants was not easy. The flora was poorly known, there were few treatments (books), and debates over classification raged. Compounding the problem, botanists in the region worked in relative isolation. Communication was slow, travel expensive. They discussed taxonomic problems by letter—hard to imagine given the complexity of the subject.

In the fall of 1898, Nelson notified Rydberg that he would be working in Yellowstone National Park the next summer. In his reply, Rydberg explained what Nelson probably already knew:

“The flora of the park is, however well worked up as several collectors have been in there, viz., the Hayden Survey, C.C. Parry, Letteman, Burglehous, &c. The one that has done the most, however, is Frank Tweedy of the U.S. Geological Survey. He spent two whole summers in the park."


Rydberg recommended that Nelson focus on unexplored parts of the Park:


"I would advise you to select the mountains east and south east of Yellowstone Lake. None of the collectors that I know of has collected in that region. Tweedy only touched it at the south end of the Lake.”

The following spring, Rydberg again urged Nelson to work in the southern part of the Park. This time he sent a map. 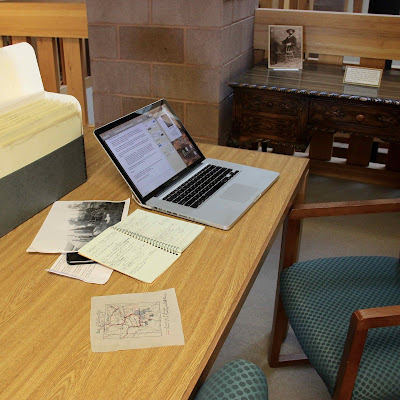 I felt a rush of excitement when I found Rydberg's map in the University archives. Holding it, it seemed he had sent it to me—maybe because it was hand-drawn, or because he didn't cut the tracing paper straight. Or maybe because he explained exactly how he made it:


“Mr. F. Tweedy has kindly sent me a map, on which he has indicated the routes he has traveled in the Park. I have made a tracing of a map of the park. It is of a small scale and many times smaller than that he sent to me, but I have tried to copy his routes thereon as well as that of myself and Mr. Bessey in 1897.”

Rydberg's map and advice were clear and persuasive:


“From that you can see that the park has been gone over fairly well. Add to this the collections made in the Park during the Hayden Surveys, by Parry, Dr. Hall, Miss Compton, and others, it is safe to say that it has already received its good share. The south-east and southwest corners are not well known, however. I should advise you to spend a good deal of time in the region south-east of Yellowstone Lake, if you can do so. Especially do I think that you will find the high mountain range on the east a profitable field.”

Excellent advice, Professor Rydberg, I agree completely. But, alas, I won't be going. The map and advice were for Aven Nelson.

Nelson spent 14 weeks in the Park with his wife, their young daughters, and two student assistants. It was a rare opportunity. Though Yellowstone was already popular with tourists (9579 came in 1899), only the affluent could afford to visit.
The Nelson party traveled by horse-drawn wagon, camping out the entire time. In 14 weeks they collected, pressed and dried 30,000 specimens—an astonishing number given the working conditions. But they did not go to the areas recommended by Rydberg.

Nelson left no record as to why. Perhaps it was lack of wagon roads, or because they had lost a student assistant (Elias Nelson stepped into scalding hot mud, burning his leg so badly that he had to be sent home). Perhaps—in fact probably—Nelson wanted to collect as many specimens as possible to add to the herbarium at the University of Wyoming (today's Rocky Mountain Herbarium). Sticking to roads maximized collections.


After the expedition, Rydberg and Nelson continued to correspond on taxonomic issues. But there’s no evidence that they discussed Yellowstone—no questions from Rydberg as to why Nelson collected only in the parts of the Park that had been “gone over fairly well.” For now, the reasons remain a mystery. 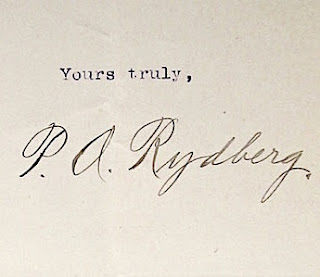