“For each man sees himself in the Grand Canyon” 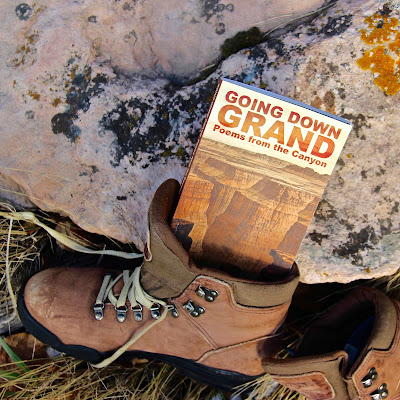 There’s one more thing you need for your trip into the Canyon—a book of poetry. Yes—a book of poetry!—even as you try to reduce your belongings to the bare essentials, try to minimize volume and weight. Maybe these extra ounces will bring you something wonderful one evening, or while you’re waiting for the shuttle, or resting at the end of a switchback. Maybe you’ll look more closely at the intimidatingly inspiring views, colored patterned rocks, drifting spiders, flowering cacti, vast air. Maybe you’ll feel something new, a reaction you hadn’t felt before (don’t jump!). You might even learn something—like where twilight and dawn go after they’re done with us.

Editors Peter Anderson and Rick Kempa selected poems they hope will “prove true companions on your own Grand Canyon journey, whether you are on the river, the trail, the rim, or elsewhere, yearning to return.” The book itself is a bit of a trip, organized as legs of a journey: On the Rim; Down and In; From the River; Emergence. They kindly left out the epic, obscure, esoteric and puzzlingly-metaphorical. This is poetry we can read, ponder and enjoy even if we aren’t particularly poetic ourselves. (That could change!)

like nothing you had imagined, nothing
in the pocket-sized postcards or the travelers’ guides,

is the split continent, enormous and jagged,
a terrible incision, terribly gorgeous,

the late-afternoon air pouring in … (1)


going down, down
by layer, down by grain,
down under thunder-named:
Kaibab, Toroweap, Coconino
Sandstone. Switching back
to shale, toenail turning
black, rock red and raw … (3)

How to understand river:
ride eight days on its back
between walls time carved a mile deep
rose blood-red gray-green black—
not yet speaking its language
give it words
swift-running silt-laden shimmering. (4)

What more can we give to this world?
Nothing but walking
here softly,
with our hearts
wide open to beauty,
with our eyes
catching rainbows
and shadows. (5)

I speak now of that Grand Canyon
which lies within each of us. There
are pre-Cambrian rocks at the center,
the core, and talus from yesterday’s fall;
marble and granite grown hard from the
pressure and heat of heartbreak and
passion; crumbling sandstone, layer on
layer of sediment, sentiment piled on
over a lifetime’s experience. (6)

These poetic reactions of minds and souls in the presence of something awesome-beyond-words are diverse and wide-ranging—descriptive, emotional, mysterious, mystical, musical, humorous, grim. Often I found myself reading about the poet as much as the canyon. As Carl Sandberg said (and Anderson and Kempa emphasize), “each man sees himself in the Grand Canyon”(7).
I’m not a poet, and I read poetry only occasionally. Yet I found a lot pleasure in this book. Perhaps it’s not surprising, given that I love the American West and all the natural history I can glean from it. But poets create new things and new ways of looking that are fascinating. And poetry’s sparseness makes me notice details, physical and mental. It focuses my attention, much as my camera does.

Hoping to learn more, I interviewed (via email) editors Peter Anderson and Rick Kempa, and publisher Danny Rosen of Lithic Press. All are poets, and all have been down Grand one way or another.

Peter and Rick, how did the idea for Going Down Grand come about?

We’re pretty sure there was beer involved. It could have been any one of many late night conversations we periodically have about poetry and the west and books…

Why did you choose poetry—what does poetry do for the Grand Canyon that prose can’t? Do poets see or experience the canyon differently?

Interpretive writing doesn’t necessarily address issues relating to the way a place feels; poetry does—poetry invites more emotion which doesn’t usually turn up in informational prose. Also poets may be more inclined to use their imaginative powers in developing a relationship with a place.

How many poems did you consider, and how did you find them?

We looked at hundreds of poems. We solicited contemporary poems by way of print publications and websites. We also rooted around in special collections in regional university libraries in Utah and Arizona, and did a lot of research to find any and all Grand Canyon poems previously published.

Danny, what was it about Going Down Grand that led you to publish it? Did the subject influence the design of the book?

I have great respect for the sensibilities of Pete and Rick, both artistic and philosophic, and as a lover of the wild planet and with a background in geology, I find the Grand Canyon a sacred place. It is a privilege to add something to the ongoing story of comprehending and appreciating this special place.

The narrow, tall dimensions of the book [5” x 9”] mimic the canyon itself, as does the long, narrow shape of many of the poems. We wanted the book to travel well, to fit in a back pocket. We made sure it would easily fit into ammo boxes—frequently used on river trips. Pete and Rick will probably say more about this …

Peter & Rick: Yes, we hope this book travels! Our target readers are visitors to the Grand Canyon—almost 4.5 million a year, whether they experience the canyon from the river, from the trail, or—as most do—from the rim. Poetry can offer them fresh insights into an experience of place.

As a non-poet, I ask: How does one read a book of poetry?

Peter & Rick: You don’t have to plow through it from beginning to end. The nature of poetry—language distilled and compressed—can make it more intense reading. Sometime it’s fun to sample and taste a little bit at a time.

Danny: I agree! Keep the book accessible. Open it at spontaneous, felicitous moments. Read the first lines and stanzas—if compelled, continue reading! It should not be a forced march. If you are repelled, turn the page and start again with the next poem. John Wesley Powell said: “…you can not see the canyon in one view… to see it, you have to toil from month to month through its labyrinths.” So it may be with poems, read them at different times, in different moods.

Plants & Rocks: John Wesley Powell—the great geologist and explorer! When I hear that name I think of his daring descent down the Colorado River in 1869, especially his fear and exhilaration in the dark narrow reaches of the Grand Canyon’s Inner Gorge. I bet he’d be shocked to hear that people sign up years in advance and pay good money for that terrifying ride! And I wonder …

... what would Powell think of this book?

Danny: As Rick and Pete say in their Introduction, John Wesley Powell was overwhelmed with the grandeur of the canyon—and he wrote that words can not adequately represent that grandeur.

Peter & Rick: Powell had a poetic side. He would certainly relate to many of these voices, particularly those who are grappling with geological time.

Danny: In fact, he might be amazed and gratified that, 150 years after his journey, so many people continue to respond to the canyon with words! 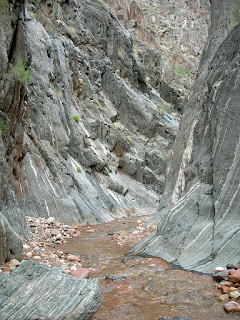 I would carry
this book down Grand. (8)

Peter Anderson is a former river guide, wilderness ranger and magazine editor. He teaches English at Adams State University in Alamosa, Colorado. Currently he is Artist-in-Residence at Exeter Academy in New Hampshire.

Rick Kempa has been hiking in and writing about the Grand Canyon since 1974. He teaches English and literature at Western Wyoming College in Rock Springs. He was Artist-in-Residence in Grand Canyon National Park in 2013.

Danny Rosen, founder of Lithic Press, has been involved in the Colorado poetry scene for almost 20 years. He lives five miles north of the Colorado River in the Grand Valley of western Colorado. Now in its eighth year, Lithic Press was recently joined by the Lithic Bookstore & Gallery in downtown Fruita.

Thanks once again to Jack Share of Written in Stone for the use of his photos. Jack blogs about geology with a passion that is poetic.