Several weeks ago I posted a geo-challenge, What do these deposits have in common?, with photos of four diverse accumulations of organic matter:  a mass of amber-like gunk containing stems and seeds, a pile of leaves and twigs, more amber-ish gunk plastered on the wall of a rock crevice, and sticks and pieces of cow manure in a rock cavity. 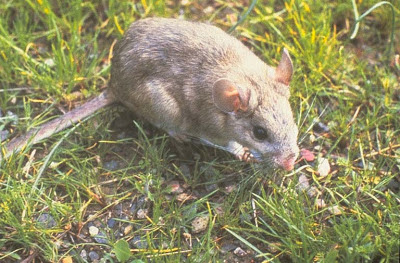 Each was deposited by a packrat (Neotoma sp.), also called woodrat.  Above, bushy-tailed woodrat at Chaco Canyon, New Mexico.  Courtesy USGS and NOAA.

Packrats are not true (Old World) rats, as are the infamous rats of urban ecosystems (Rattus rattus and R. norvegicus).  Rather they are members of the Cricetidae family, along with other New World mice and rats, for example deer mice, voles, lemmings and muskrats.  Packrats weigh in at 100-600 g (i.e. up to a pound), and have long tails, prominent ears and eyes, and strong feet for climbing trees and rocks (and rafters in the attic).  Twenty-one species inhabit North America, from Canada close to the Arctic Circle south to Nicaragua.  They live in diverse habitats -- boreal forests, tropical forests, chaparral, lava fields, alpine tundra, deserts of various kinds, and the nooks and crannies of human habitation.

In all environments, packrats depend on moist plant matter for both food and water, and so spend a lot of time foraging.  They have a strong propensity to collect non-food items as well, hence their name.  Collectibles in the mind of a packrat include plant fragments, bones, dung and a wide variety of "interesting" items, especially anything shiny.
It’s the packrat’s curious house-building that is of interest to us.  They construct dens in various styles, depending on the species, utilizing structures and materials available in their particular habitat.  For example in the chaparral of coastal California, the dusky-footed woodrat (Neotoma fuscipes) builds large mound-like dens of leaves, twigs and other debris (photo below) that provide protection from rain and predators, and insulation against temperature extremes.  Inside, the den is subdivided into chambers, including one for a nest, several pantries, and one on the periphery or just outside that serves as an outhouse and garbage dump -- a midden.  As we'll see shortly, some packrat middens are of great interest to humans. 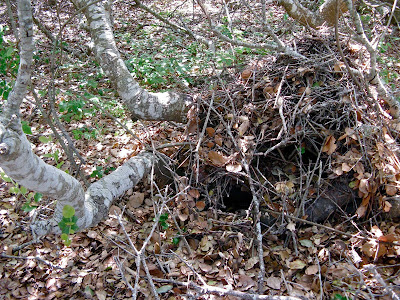 In areas with rock outcrops, packrats take advantage of natural structures and construct dens in crevices and cavities, requiring less effort and resources.  Plant fragments, bones and the usual collectibles are added.  Large mammal dung is popular in some places.
The middens of rock-outcrop-dwelling packrats, especially in arid environments, are the ones we value most.  Some are spectacular.  Protected from the elements deep in a crevice or cavity, large masses of packrat debris can accumulate, cemented together with highly-concentrated urine to form a hard, durable amber-like material called amberat (or occasionally "ratite").  In such a situation a packrat’s refuse pile may remain undisturbed for thousands of years, growing with each generation of residents.  The giant midden below is at least 28,000 years old (orange notebook is 7” x 4”).  Courtesy USGS. 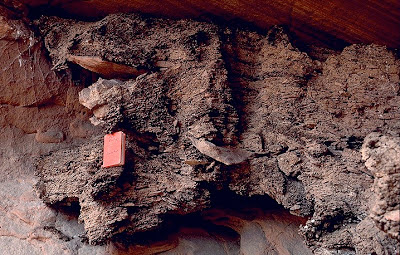 As you can see above, amberat can be beautiful ... and maybe even appealing:


"we came to a high cliff and in its face were niches or cavities as large as a barrel or larger, and in some of them, we found balls of a glistening substance looking like pieces of variegated candy stuck together ... It was evidently food of some sort, and we found it sweet but sickish, and those who were hungry ... making a good meal of it, were a little troubled with nausea afterwards" (party of Gold Rush miners headed for California in 1849, from Betancourt et al. 1990, p 3).

Amberat may be a terrible food substitute, but it’s invaluable nonetheless, for it contains a record kept by all packrats that ever lived in the den.  Plant fragments are well-preserved in amberat, and can be identified even after many thousands of years (photo below).  In the dry environs common in the American West, middens are a major source of evidence for reconstructing past vegetation and environments, from the Pleistocene (last glacial advance) through the Holocene (post-glacial time through the present).  Some middens have been found dating to at least 40,000 years before present.

Fossil middens, with the collections of many many many generations of packrats from prehistoric times to the present, allow us to look back on the vegetation of yesteryear and the way it has changed over time.  The Colorado Plateau is especially amenable to such paleoecological reconstruction.  In the arid environs of the Plateau, many fossil middens have been preserved.  The Plateau also is an area of high topographic relief, where vegetation can shift up and down in elevation in response to climatic change.  Vegetation and climate change from glacial times to the present have received a lot of attention.
During the last glacial period, boreal and montane forests were common on the Colorado Plateau.  Now these trees are restricted to montane sites, having moved up in elevation as much as 3000 feet (diagram above).  In other cases, plants responded by shifting their distribution along a north-south gradient.  For example, the piñon-juniper woodlands that are so common on the Colorado Plateau today were absent during the last glacial period, when they grew much further south.  They invaded northward as the climate warmed.

Interpreting a packrat’s record requires caution and a good understanding of the critter itself.  Though a great collector, a packrat’s foraging range is limited to within 30-100 m of its den.  And they can be picky, especially those that are dietary specialists.  For example, Stephen’s woodrat eats little aside from juniper, while a bushy-tailed woodrat living in the same area will have a much more diverse diet.  All packrats prefer moist plant parts (at least 50%  water by weight) as food is pretty much their only source of water.

Thus a packrat’s tastes distort the relationship between the record kept in its midden and the surrounding vegetation.  While middens may reveal some of the plant species that grew in the area, we can’t easily conclude that there weren’t others as well, even some that were common.  Perhaps the packrat just wasn’t interested (which seems to be the case for grasses, for example).
The abundance of a given plant species in a midden does not necessarily reflect its abundance in the surrounding area.  Trees are especially prone to over-representation because it’s not uncommon for trees to grow adjacent to rock outcrops in areas otherwise tree-less (more water, shade available).

Another confounding factor is change-in-ownership.  One can’t assume that the same species of packrat has occupied a den for thousands of years, especially if the climate changed during that time.  Indeed, some investigators found that when they removed a packrat from a den and a different species moved in, the new midden deposits changed noticeably ... due to change in packrat tastes rather than in the surrounding vegetation.

In spite of these complications, middens continue to be valuable indicators of paleovegetation, especially when multiple middens are used, and in conjunction with pollen data.  Fossil middens and fossil pollen provide complementary information.  Plant fragments from middens generally can be identified to species, but represent just the vegetation close to the den.  Pollen records come from larger areas, but most source plants can’t be identified beyond genus or even family.

The Pleistocene - Holocene transition is the most popular focus of midden study, but recent changes in vegetation also have been clarified using records kept by packrats, for example the contentious topic of whether juniper invasion has been facilitated by recent livestock grazing and fire suppression.  In the Pacific Northwest, midden data from lava tubes, combined with pollen analyses, indicate this trend is related to post-glacial warming, having begun long before humans, cattle and sheep arrived (Mehringer and Wigand, in Betancourt et al. 1990).
Cole et al. (1997) used midden data to look at historical changes in high-desert vegetation in Capitol Reef National Park.  Presettlement middens consistently contained a suite of palatable (to livestock) plant species that are now absent or greatly reduced, for example winterfat and Indian ricegrass.  Unpalatable species now present, such as snakeweed and Russian thistle, were not found in middens older than 200 years.  The authors concluded that “the most severe vegetation changes of the last 5400 years occurred during the past 200 years”, i.e. with introduction of livestock grazing.
Packrat middens are so common in the deserts of the American West that it seems all one has to do to find one is peek into enough crevices and cavities.  They are worth seeking out.  Amberat is distinctive and curious, and even beautiful in some cases.  If you're lucky, a midden will be close enough to the ground to examine its contents.
Attentive readers will remember that amberat is not edible.  However there are claims (mainly by vendors) that it possesses healing properties due to “a unique complex of bioactive substances” (of course!).  But before you start scraping amberat off rock walls and ledges, you might want to read this recent post at The Eekosphere.
P.S.  While I was putting together this post, I happily stumbled upon The Eekosphere, a great blog about Eek, a dusky-footed woodrat (packrat) whose best friend is Scribble, a Norwegian rat.  No, this is not a children's book ... it's a true story! ... and highly-recommended.