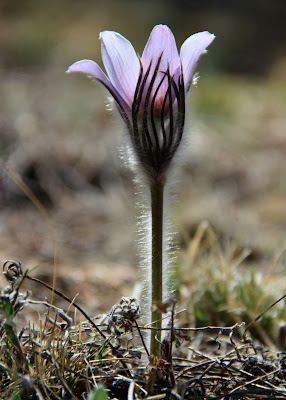 Last week as I was walking along a trail through pines and aspen, looking at patterns of light and shade, I was suddenly halted in my tracks by a radiant cluster of pasque flowers, all glowing in the morning sunshine.  “Good morning, good morning!” they called sweetly. 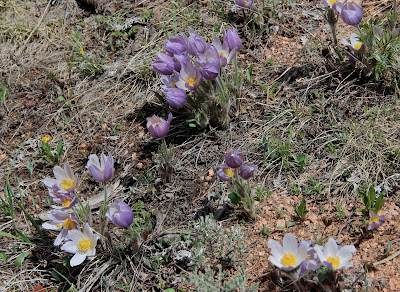 You doubt me?  I assure you this is what I heard, though I had to listen very carefully because pasque flowers are shy -- that’s why they often turn their heads and always whisper.  But once upon a time, long ago, things were different ...


“In the long ago, whenever any of the people happened to pass by where these flowers were blooming they tried to show the friendliness which they felt for human beings by nodding their heads in the chilly spring wind, showing their smiling faces and saying, “Good morning! Good morning!”  But the people passed them unheeding.  They became abashed at this indifference, so nowadays still feeling friendly towards the people in spite of such rebuffs, they bashfully turn their heads to one side as they nod and call their kindly greetings in their sweet low voice.”  (Dakota story, from Gilmore 1922)

How anyone could walk by pasque flowers "unheeding" is beyond me.  In fact most Wyoming folks are thrilled to find them -- they bring us great joy!  They're among the first plants to bloom in spring (May in the mountains), along with Easter daisies and sagebrush buttercups.  Even better, pasque flowers are large and showy.  Some of the plants I saw were a good six inches tall.  How do they manage to grow so quickly so early in the season?
The pasque flower’s trick is to form buds the previous fall, buds covered with silky hairs that help keep them warm.  The downy coats are the source of another common name -- goslinweed.  Several emerging goslings are visible at the base of the plant above.

Pasque flower, goslinweed, prairie crocus, pulsatille, hokshi-chekpa wahcha (Dakota for twin flower) and prairie smoke (more commonly used for Geum triflorum) all are names for this plant.  In school we’re taught that scientific names, though constructed from a dead language (Latin), are what we should use because they don’t have the ambiguity and confusion associated with common names.  This is not the case with the pasque flower however.  The experts remain divided.  Some call it Pulsatilla patens, others Anemone patens, and a few try to maintain the original Pulsatilla ludoviciana, though declared invalid years ago.  In any case, the pasque flower is a member of the Ranunculaceae (buttercup family) and is closely related to anemones, if not actually one itself.
Though showy, pasque flowers are but a brief flash of color in the spring sunshine.  They soon drop their sepals, and the pistils mature into seed-bearing achenes with long tails.  This is when the leaves really get going.  Most vegetative growth occurs after flowering, and leaves are present through much of the growing season, converting sunshine to energy and finally to buds (goslings) for next year.
When Melvin Gilmore was studying the ethnobotany of Great Plains tribes in the early 1900s (see Note below), he came across another charming story about the pasque flower.  Later in the spring, when many flowers are in bloom and brightly decorated with colorful petals, the pasque flower has already gone to seed.  So it sings a song to the other flowers, hoping to share its wisdom:

“I wish to encourage the children
Of other flower nations now appearing
All over all the face of the earth;
So while they awaken from sleeping
And come up from the heart of the earth
I am standing here old and gray-headed.”

(translated from the Dakota language by A. McG. Beede; in Gilmore 1919)

Note:  In the early 1900s, Melvin R. Gilmore interviewed elderly Plains Indians who had once gathered native plants and still knew the old names and uses.  He was determined to gather this knowledge ...

"while it may still be obtained, before the death of all the old people who alone possess it ... The old people themselves appreciate this and have expressed themselves as glad to give me all the information they could in the matters of my inquiry, in order that, as they said, future generations of their own people as well as the white people may know and understand their manner of life."

Gilmore first reported his findings as a PhD dissertation at the University of Nebraska (1914).  In 1919, it was published by the Bureau of American Ethnology.  Several years later he wrote Prairie Smoke, a wonderful compilation of Plains Indian stories and legends. 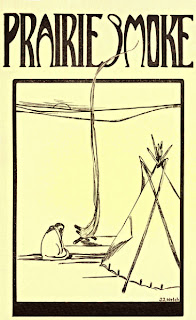 Gilmore, M.R.  1919.  Use of plants by the Indians of the Missouri River region.  Bureau of American Ethnology.