There's a hole in the ground (geology is destiny) 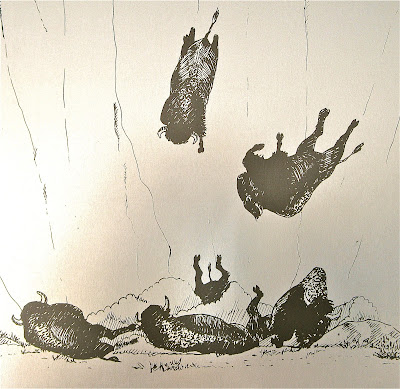 Until the mid 1800s, herds of bison grazed the large rolling grasslands of the Red Valley in the northern Black Hills.  They were there because of lush nutritious grasses, which were there because of deep fine-textured soils derived from soft easily-eroded red rocks of the Spearfish Formation.  Grasslands extended for miles and bison came in droves.  But there was danger in the grass.  In addition to creating grasslands, geology also had ensured that underground caverns would form and that the land above would collapse to make sinkholes.  It was the destiny of some 20,000 bison to end up in a single sinkhole, a hidden trap in the grass.
Take a look at the Black Hills from the air and you'll notice an obvious concentric pattern to the topography, the result of differential erosion after the Hills were uplifted.  Harder, more resistant rocks stand high, like the granite and limestone in the central part, and sandstone in the outer rim.  In between is the Red Valley or Racetrack, eroded into soft siltstones of the Permo-Triassic Spearfish Formation (equivalent to the Chugwater Formation outside the Black Hills).

The Spearfish Formation also includes layers of gypsum among the redbeds, and it is because of the gypsum that there are sinkholes.  There are artesian aquifers under much of the area, and water readily flows up through fractures in deeper strata.  If the water crosses a gypsum layer, it dissolves the gypsum, sometimes enough to form caverns. The ground above may then collapse.  Sinkholes are common in the Red Valley, and new ones continue to form.  When a piece of ground collapsed in 1985, local ranchers heard rushing water just below the surface, flowing through a cavern extending beyond the range of their flashlights.  They had found more evidence that at least some of the sinkholes in the Red Valley were created by dissolution of shallow gypsum. 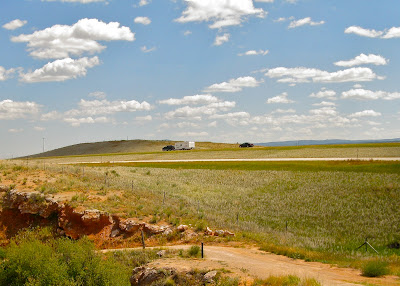 The Red Valley is an easy route across the northern Black Hills, and has been used as such for a long time -- by large migratory animals like elk, bison and probably Pleistocene mammals in the day, by American Indians, then trappers and traders, and now by tourists and truckers on Interstate 90.  I-90 follows the Red Valley from Sundance, Wyoming, east to Rapid City, South Dakota, en route from Seattle to Boston (above and below).
Original plans for I-90 had the highway crossing part of the Vore Ranch west of Beulah, Wyoming.  The east-bound lane was to pass over a fairly large sinkhole that would have to be filled and compacted.  When engineers drilled into it to assess the feasibility of the route, almost immediately they hit an amazing deposit of bones and American Indian artifacts.  The highway route was shifted south, and excavation of the sinkhole began. 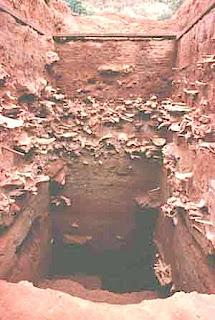 Left:  Preliminary excavations in the early 1970s revealed bones throughout the sinkhole, which is about 200 feet across.  It is estimated to contain the remains of 20,000 bison, and thousands of stone arrow points and other tools.  Photo from Vore Buffalo Jump website.
The Vore sinkhole is about 40 feet deep, with steep walls -- an unseen and fatal hazard for a running bison or stampeding herd, a perfect trap.  For at least 400 years, from 1300 to 1700 (AD), American Indians drove bison into it.  The panicked animals probably were completely unaware of the hole in the ground until they plunged over the edge.  Any that didn't die outright from the fall were finished off by hunters.  The animals were then butchered at the site.

The deposit of accumulated bones and tools in the bottom of the Vore sinkhole is almost 20 feet thick, with 22 distinct levels.  Fortunately for archeologists, sediment washed in every year, and these annual layers (varves) can be used to date individual jumps.  “It’s not just a pile of bones, it’s a history book” (Gene Gade, VBJ Foundation). 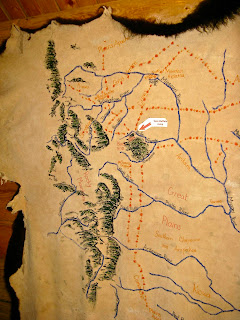 Tribes that probably used this buffalo jump include the Shoshone, Crow, Cheyenne, and Plains Apaches and Kiowa.

Right and below:  map painted on buffalo hide, showing geography and American Indian tribes of the Great Plains, from the VBJ Visitor Center.  The hide was donated by John Flocchini of the Durham Buffalo Ranch in Wright, Wyoming. 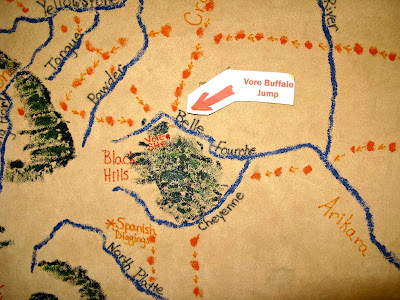 The importance of the Vore buffalo jump as a cultural site was recognized early on.  It was designated a National Historic Place in 1973, and in 1989, the Vore family generously donated 8.25 acres for research and education.  The site now is owned and managed by the non-profit Vore Buffalo Jump Foundation.  Research continues, and educational facilities and tours are available at the site.  A small interpretive center on the rim of the sinkhole welcomes visitors.  A large building in the bottom protects the excavation, which is open to the public.  The entrance fee is $5 per person, with a maximum of $10 per family (2012).

The VBJ Foundation is small but very active.  Contributions of any amount are appreciated; annual membership is $25.
The Vore Buffalo Jump is located just north of I-90 between Sundance and Beulah in northeast Wyoming.  See the VBJF website for detailed directions.  It is open from 8 am to 6 pm from June 1 through Labor Day (confirm here), and off-season tours can be arranged.  Despite its rural location, visitation is respectable -- some 10,000 people stopped in at the site in 2010. 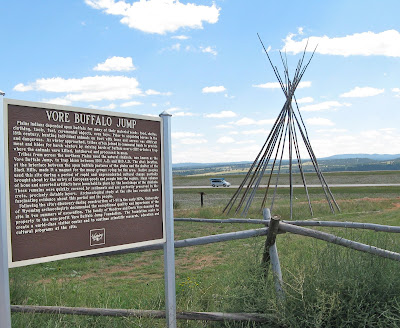 Watch a short video produced by the University of Wyoming Cooperative Extension Office for information and views of the Red Valley, the Vore sinkhole and the dig.

The Vore Buffalo Jump Foundation website is a good source of information on the archeology of the site.  There also is a short article about the geology of the sinkhole.

Kornfeld, M. and Reher, C.A.  1996.  12,000 years of hunting and gathering in northeast Wyoming: an archaeological overview of northeast Wyoming,  Tech. Rep. No. 10, Department of Anthropology, University of Wyoming.