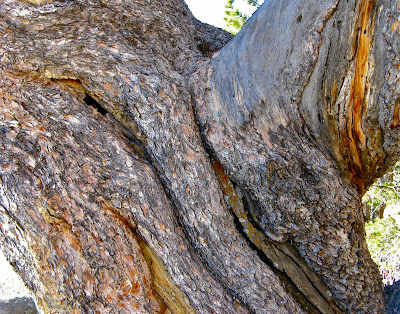 We look up to trees ... not just the tall ones, but also (or especially) those that represent the more noble aspects of human nature.  We see in them traits we aspire to ourselves. They are role models.


“... even more I revere them when they stand alone. They are like lonely persons. Not like hermits who have stolen away out of some weakness, but like great, solitary men, like Beethoven and Nietzsche. In their highest boughs the world rustles, their roots rest in infinity; but they do not lose themselves there, they struggle with all the force of their lives for one thing only: to fulfill themselves according to their own laws, to build up their own form, to represent themselves.”  Hermann Hesse, Bäume. Betrachtungen und Gedichte (Trees. Reflections and Poems) 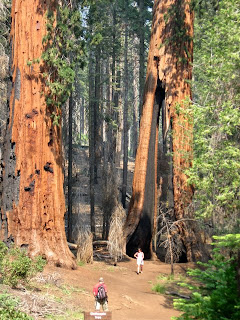 Many people, maybe most, seem to have an instinctive reaction to the great size, strength and perseverance of trees.  Trees spark admiration, awe, contemplation.  We designate parks to protect them, and take vacations to see them, trying to capture with our cameras the things about therm that so inspire us.

Thirty years ago, we were hiking through incense cedars and white firs in Sequoia National Park when we rounded a corner and came “face-to-face” with the massive trunks of several giant sequoias.  I was stunned by their size, it was beyond anything I had expected.  They seemed other-worldly, primeval.  We had no camera, so we stayed for awhile, hoping to fix in our minds those feelings of awe so we could take them home with us!  Do I still have them?  ... yes, I think so.  They're probably deeply buried, but I'm sure they must affect me when the moment is right.

I was equally stunned when I met up with ancient bristlecone pines (Pinus longaeva).  They grow on arid windy slopes at 10,000 ft elevation for thousands of years, adding just a centimeter of girth per century.  The old ones lack the size and symmetry of stereotypical "mighty" or "noble" trees, but the beauty of their forms is astounding. 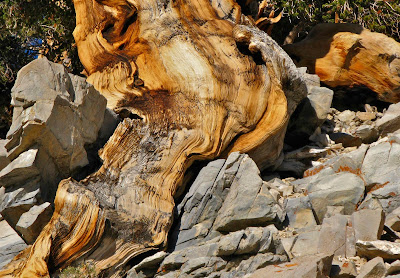 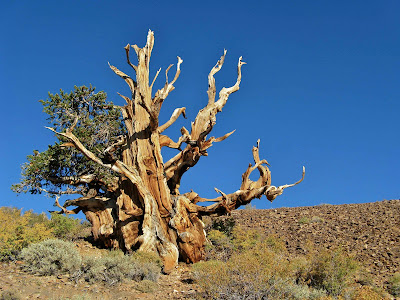 This bristlecone  is mostly dead, having lost main shoots and branches to wind, erosion and snow.  But it carries on, bent and twisted, with just a narrow strip of living bark, still producing viable seed -- the embodiment of perseverance and adaptation in the face of adversity.


“... it is natural to feel we might learn wisdom from them, to haunt about them with the idea that if we could only read their silent riddle rightly we should learn some secret vital to our own lives ..."  Kim Taplin, Tongues in Trees 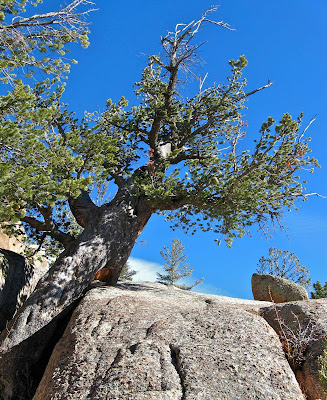 Here's another tree I find impressive -- a sizable limber pine growing out of a slot in a granite outcrop.  Its home is hospitable in some ways.  Water runs off rocks into the slot, organic debris accumulates.  But the crevice is four to five feet deep and little sunlight reaches the bottom.  The pine must have started life protected but shaded, and buried each winter in snow that was slow to melt in spring.  How much was it able to grow each year, and what happened when finally it emerged into the sun?  Did it take off on a growth spurt lasting years?


Another problem -- there’s only so much space in the crevice.  The tree has done pretty well even so.  At breast height, it’s 11 feet in circumference, 3.5 ft in diameter, but the trunk isn't round ... in fact it's rather squashed.  The tree leans to the south against one of the rock walls, with its bark missing (orange patch below).  Was it aiming for more sunlight by growing southward?  Or did it bend under a load of snow, back in the days of its youth?
Which brings us to limber pines as role models.  They’re called “limber” for a reason -- their flexibility.  A few days ago, I came across a dead tree that had recently fallen, bringing down with it a young limber pine about six inches in diameter.  Amazingly, the limber pine hadn’t snapped.  It was bent at a 90º angle less than a foot above the ground, with no obvious damage to the trunk.

Another name for this pine is "limbertwig" -- in fact, longer twigs can be tied into knots.  This suppleness allows them to dance exuberantly in the wind.  Might we be inspired to do the same?

Limbertwig shadows dancing on granite while the wind sings. 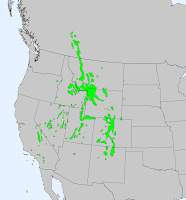 Limber pine is widespread in western North America.  I found many sources on the web that mistakenly characterize it as subalpine.  It occurs across a wide range of elevations, more so than any other tree in the central Rocky Mountains, from tree line to the margins of low-elevation grasslands.  For comprehensive information, see Pinus flexilis in the Fire Effects Information System.  Map courtesy USGS. 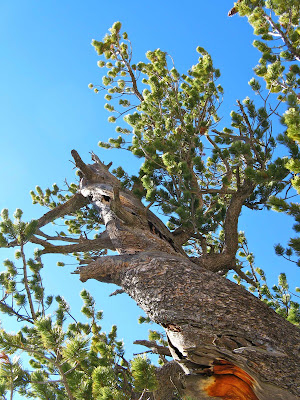 My limber pine (above) grows at about 8000 feet in the Laramie Mountains of southeast Wyoming, at least a thousand feet below the subalpine zone.  The main shoot is dead, but the tree keeps growing anyway.  I really like this gnarled old pine in granite.  I considered following it, but I suspect it’s inaccessible much of the year due to snow, so I chose a weeping birch instead.  But now, on second thought, I think I will follow them both!


"The pine tree seems to listen, the fir tree to wait -- and both without impatience -- they give no thought to the little people beneath them devoured by their impatience and their curiosity."  Friedrich Nietzsche

I'm Following a Tree
Are You?

Tree-following is hosted by Lucy at Loose and Leafy.


More tree wisdom and quotes can be found at The Quote Garden and the Garden Digest.