Topographic reversal, then and now

Crossing the southern Laramie Basin are elongate mesa-like surfaces that stand as much as 500 ft (150 m) above the Laramie River.  They are capped with water-worn gravels and cobbles derived from formations in the Medicine Bow Mountains to the west, with fragment size decreasing from west to east. 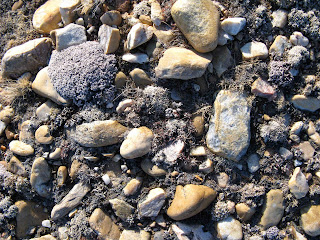 Above, cobbles on the Eagle Rock surface.
Below, closer view with penny for scale. 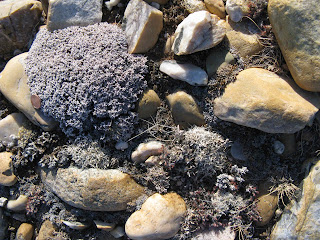 These surfaces are the remains of old drainage bottoms of the Laramie River and its tributaries.  Why are former lowlands now standing above everything else?  Because the rest of the old landscape is missing, removed by several-million-years-worth of erosion.  The coarser deposits of the old drainage bottoms provided protective caps while surrounding softer Mesozoic rocks were worn away.  This differential erosion has produced topographic reversal or inversion.
The most prominent of the surfaces is the Airport surface, which consists of two arms that join at the Laramie Airport.  The north arm extends 17 miles west to the valley of the Little Laramie River; this is the route of US Highway 130, the Snowy Range Road.  The surface drops 270 ft (80 m) in elevation from west to east, with the gradient decreasing from 60 ft/mi to 20 ft/mi en route.
Excavation of the Laramie Basin is attributed largely to wind (deflation), in part because aeolian features are so abundant.  Between the the two arms of the Airport surface lies the Big Hollow, one of the largest deflation depressions in the United States.  It is roughy eleven miles in length, up to four miles across and as much as 200 feet deep (18 km by 4 km; to 60 m deep).  No evidence of faulting or subsidence has been found.  Deflation mainly during cold dry Pleistocene times is the generally-accepted explanation, probably aided by periglacial weathering.

Smaller deflation hollows are common in the southern Laramie Basin; some are younger Holocene features that are still growing.  Many are occupied by lakes with no external drainage, and salt pans have developed with seasonal evaporation. Aeolian deposits of salt often occur downwind of the lakes, marked by halophytic (salt-tolerant) vegetation. 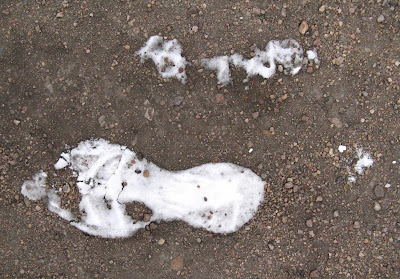 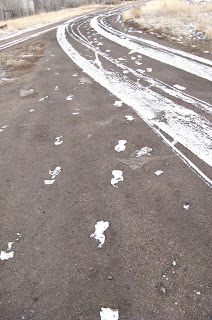 The Pleistocene may be over, but aeolian processes are still with us.  We've had day after day of “strong winds” with average speeds of 35 to 45 mph and gusts to 50, 60 and even 80. Topographic reversal is happening!  Most of the snow has blown away, leaving relic features that were protected from deflation by compaction.  Depressions made by feet and tires now "stand high" above the dirt and asphalt.