This post is the sequel to Where on Earth did western Nevada go? ("Nevada" as defined by political boundaries). In the Proterozoic, roughly 700–600 million years ago, a continental rift sent the west half of Nevada drifting away, replaced by a widening sea. The east half stayed behind as part of Laurentia—predecessor to North America.
Now that coastline is a distant memory, for western Nevada has been reassembled. The missing Precambrian rocks were replaced with a patchwork of shoved-up seafloor, wandering fragments of lithosphere, deformed volcanic islands, widespread igneous intrusions, and more.
Passive margin, long-lived but not forever

Reassembly didn't start right away. For several hundred million years, the Laurentian coast was a passive margin—the continent and seafloor on the same plate, with no tectonic activity. Thick layers of sediments accumulated offshore. Three zones of deposition are recognized, now represented by early Paleozoic rocks: continental shelf in eastern and central Nevada (e.g., Lone Mountain in photo above); continental slope in central Nevada; and, to the west, deep basin sediments underlain by seafloor.
By late Devonian time, the Laurentian coast no longer was passive. Plate reconstructionists have concluded that while the east coast of Laurentia was colliding with continental masses from the east, the west coast was overriding the adjacent oceanic plate. The result was mountain-building. Seafloor and deep basin sedimentary rocks were shoved east to become high, dry, and out of sequence in central and eastern Nevada.

The first such event was the Antler Orogeny, now thought to have lasted long enough to have involved collisions with multiple island arcs and/or continental fragments. Deformed deep basin sediments were thrust east over the continental shelf (Roberts Mountain thrust; yellow unit in map above). This was followed by the Sonoma Orogeny, when the Sonomia superterrane collided during Permo-Triassic time, sending deformed deep basin rocks and seafloor eastward (Golconda thrust; dark blue unit in map above).
Continental expansion really took off during the Mesozoic, with the arrival and accretion of numerous terranes—island arcs and other chunks of lithosphere. By the beginning of the Cenozoic era, western Nevada had been reassembled. It was all land, with no ocean in sight.
Mapping Nevada's terranes
Given all that has happen in Nevada during the last several billion years, geologists have found it useful to divide the state into tectonic domains, a domain being an area of rocks with a distinct tectonic history (Crafford 2008). For example, there are three domains from the time of the Paleozoic passive margin—Shelf, Slope, and Basin. The Antler and Golconda domains are the major Paleozoic thrusts described above.
In contrast, the terranes that drifted in and accreted to Nevada during the Mesozoic are difficult to figure out and map. These are defined as areas bounded by faults, each with its own usually-perplexing geologic history. "While significant progress has been made in identifying distinct terranes ... when these terranes arrived, and the nature of their total displacement relative to each other and the autochthonous part of the Mesozoic margin is variably constrained" (Crafford 2008). In other words, where they came from, how they got to where they are now, and why they are so deformed will provide research topics for many years to come.
Puzzles that they are, the Mesozoic terranes have been assigned to just two domains. The first contains the Jackson–Blackrock composite terrane in northwest NV. The second contains everything else. Called the Mesozoic terranes and assemblages domain, it includes "most of the pre-Tertiary rocks exposed in the western third of northern Nevada" (Crafford 2008).
There but for the grace of the Guide go I
I was in the western third of northern Nevada last May, and was able to visit several of these mysterious chunks of lithosphere, thanks to Roadside Geology of Nevada by Frank DeCourten and Norma Biggar (2017). I'm quite sure I would not have spotted them on my own.
The first was the Pine Nut assemblage in far west Nevada. Not far from California, NV Hwy 338 passes right through a narrow gap between outcrops (did highway surveyors have geologists in mind?). Once a terrane, the Pine Nut is now considered one of three assemblages of the Walker Lake terrane (Crafford 2007). Decourten and Biggar, with apt prudence, describe this particular outcrop as metavolcanic—probably an island arc that collided with western Nevada sometime in the Mesozoic. 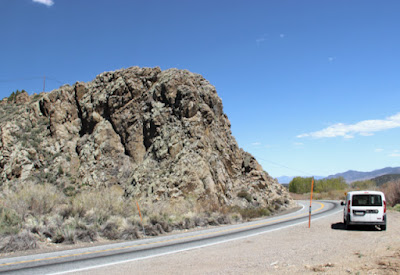 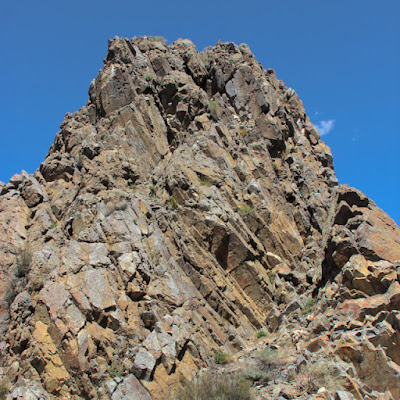 East of Fallon, I met another ancient traveler, the Sand Springs terrane. Here it's composed of platy black rocks that shine in the sun—Triassic deep sea deposits metamorphosed to phyllite and slate (DeCourten and Biggar). Elsewhere, Sand Springs rocks are volcanogenic (Crafford 2007).
My camera struggled with the dark but shiny phyllite and slate. 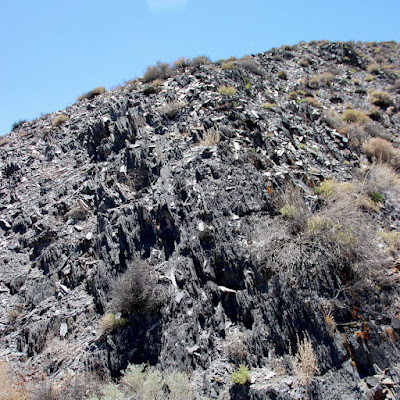 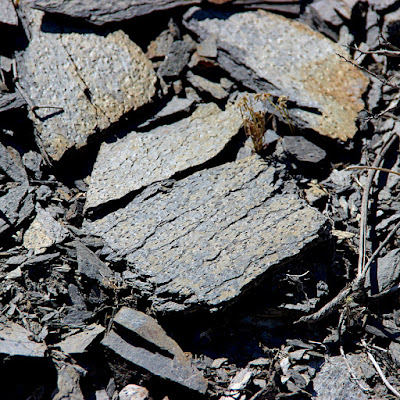 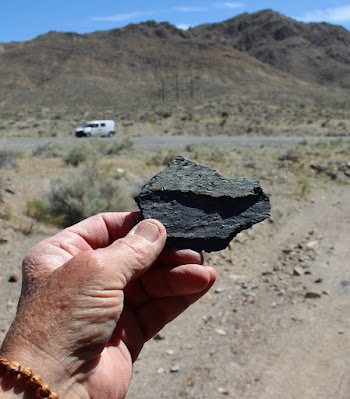 Like the Pine Nut, this Sand Springs outcrop wouldn't strike me as out-of-place if I hadn't read that it is. Knowledge is so wonderful! In fact, it's one of the great benefits of being human. Standing on a hot dry roadside, we can imagine ourselves on a beach with volcanic islands just offshore. Or perhaps on trembling ground as yet as another accretionary terrane collides with Nevada.