From the highway, Sunstone Knoll looked unimpressive—hardly worth stopping for. But I did stop. And after I explored it, imagined its fiery eruptions, and experienced its sparkles firsthand (including ten delightful minutes in the company of a small boy), I was impressed enough to take home a handful of mementos to fix the visit firmly in my memory. 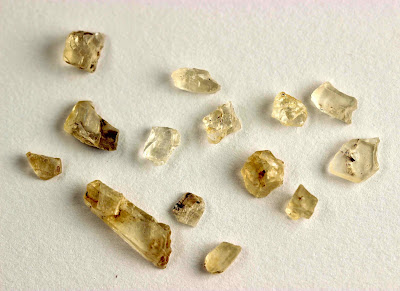 Sunstone Knoll is one of many volcanic features in the Black Rock Desert near Fillmore, Utah (see recent post). Less than 100,000 years ago, it was an active cinder cone. Then it disappeared under the waters of Lake Bonneville, a huge ice age lake that covered much of northwest Utah. Erosion took its toll. Now just remnants of the cinder cone remain, and its lava flows are buried under Lake Bonneville sediments. 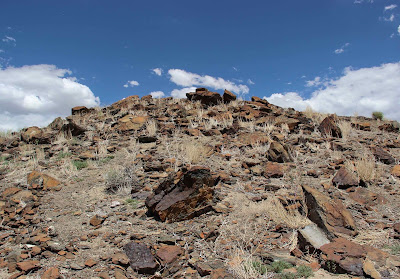 It’s neat to stand on Sunstone Knoll and ponder the dramatic ways in which the Earth changes—once a fiery cinder cone, then a lake for as far as the eye could see, and now a high desert. But history isn't the main attraction here. This is a rockhounding site. The basalt contains clear to pale yellow crystalline xenocrysts (inclusions) called sunstones.

While a true rockhound might feel the urge to put a rock hammer to basalt to find sunstones, it’s hardly necessary. Weathering and erosion have covered the ground around the knoll in gravel-sized rock fragments, and it doesn’t take long to spot sunstones flashing in the sunlight. Most of the larger ones (to 5 cm) have been carried off, but small ones are easy to find. In fact, they're unbelievably abundant. Many rockhounds have stopped here—the site is well-known and just off the highway. Even so, I quickly found a handful of sunstones. 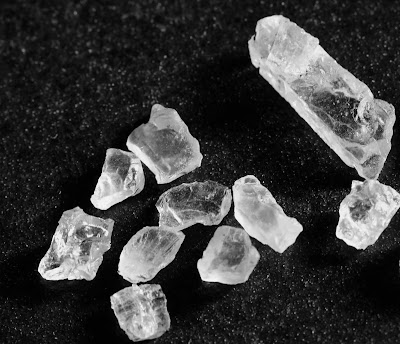 Sunstone Knoll is said to be a rockhounding site but properly speaking, sunstone is not a rock. It's a mineral—labradorite. Therefore this is my first mineralogical post. And like so many new things geological, it turned out to be more complicated than I expected. On the positive side, I learned quite a bit.

“A mineral is a naturally occurring homogeneous solid with a definite (but not generally fixed) chemical composition and a highly ordered atomic arrangement, usually formed by an inorganic process (2)” Nelson 2013/2017

In other words, a mineral is a solid that’s not manmade, and is composed of a single kind of chemical compound, i.e., can be described with a chemical formula. Also, the atoms are orderly enough to form crystals. In contrast, a rock is an aggregate of various minerals (sometimes a single kind) or of rocks fragments or of shells (more here). As the USGS explains:


“A good way to think about it is if a chocolate chip cookie was a rock, then the flour, sugar, butter, chocolate chips are the minerals that make up that rock!”

Though probably not of general interest, I would be remiss if I didn’t provide the chemical formula for labradorite (source). It illustrates the “definite (but not generally fixed) chemical composition” of minerals described by Nelson, which means there are variable amounts of elements with atoms of similar size and charge:

Mineral names usually end in “-ite”. They’re named after people most commonly (45%), followed by location of discovery (23%), chemical composition (14%) and various other things (source). As you probably guessed, labradorite was discovered in Labrador, Canada—specifically on the Isle of Paul in 1770 by a Moravian missionary (source).

When I searched Google for labradorite images, I found only a few that looked like the sunstones of Sunstone Knoll. Most labradorite specimens posted online exhibit labradorescence—beautiful flashy colors given off when light enters the specimen and is reflected from internal structure (rather than off the surface). But even though this phenomenon is named after labradorite, many labradorite specimens do not labradoresce—including Sunstone Knoll sunstones.
Labradorite usually is associated with mafic igneous rocks, commonly basalt and gabbro. At Sunstone Knoll, it occurs as inclusions in basalt. This basalt and that of other volcanoes nearby is tholeiitic in composition, unlike most volcanic fields in the Basin and Range Province. Johnsen et al. (2010) point out that tholeiitic magmatism is common in continental rift zones (as well as oceanic ridges), and suggest a rift might be developing here! Or the unusual composition may be due to the field's location between the extending Basin and Range Province and rotating Colorado Plateau (see previous post). 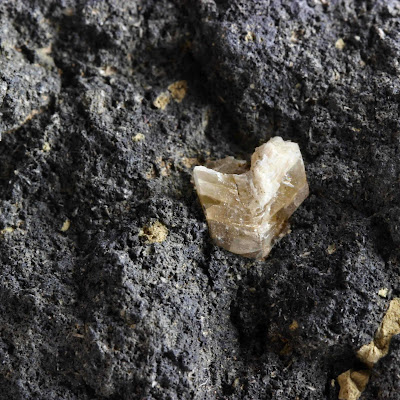 When I arrived at Sunstone Knoll, I first investigated one of the rocky crests, and found a sunstone in a chunk of basalt (above). Then I strolled around the base, where the ground was littered with small rock fragments washed down from outcrops above. Here my search was much more productive, especially after I discovered that if I walked at the proper angle to the sun, small flashes of light revealed the sunstones. 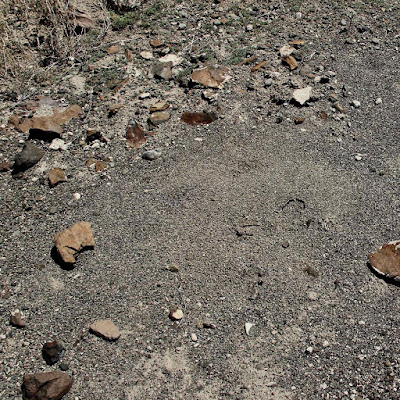 Sunstones seemed to be especially abundant in an abandoned anthill—collected preferentially? Arrows below mark a fraction of sunstones in the frame. 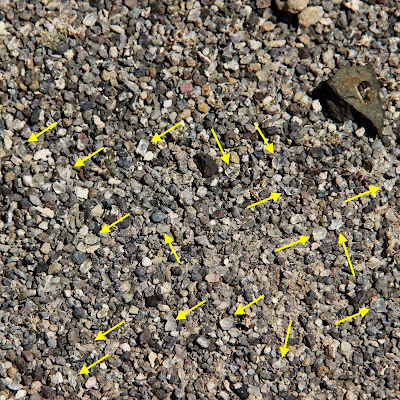 It was a lonely search. But then a minivan arrived and unloaded three generations of rockhounds. One of them—a boy maybe ten years old—ran toward me shouting: “Have you found any sunstones?! Where are they?! Show me!!” I explained my method and he went to work. After about ten minutes of collecting, he yelled to a man on the hill, “Grandpa, grandpa, they’re down here!!” But Grandpa knew Sunstone Knoll, and had a few tricks of his own. He returned from the crest with several very nice specimens in chunks of basalt.

(1) This is not the better-known Burning-Man Black Rock Desert of northwest Nevada.

(2) Traditionally minerals have been limited to compounds formed through inorganic processes, but mineralogists are reconsidering this rule: “… this eliminates a large number of minerals that are formed by living organisms, in particular many of the carbonate and phosphate minerals that make up the shells and bones of living organisms. Thus, a better definition appends "usually" to the formed by inorganic processes. The best definition, however, should probably make no restrictions on how the mineral forms.” (Nelson 2013)

Millard County Travel. Day Trips in Millard County Utah—great guide to geo-sites and other things; available online (PDF, 17.4 MB) and at museums and agencies in the county.