“so many fossils that people cry”

Long ago, on our frequent trips to Lopez Canyon, we would often pull off the road just past the lake to comb for seashells. These were fossil shells—exciting treasures common enough for a child to find. But why were they there, far from the sea, high in the rugged California Coast Range? Three hundred years earlier, the great Nicholas Steno, one of the founding fathers of geology, had also pondered this mystery: “in what way marine bodies had been left in places far from the sea.”

Steno concluded that shell-like “bodies” in rock looked like shells because … they once were shells! This seems like a no-brainer today, but in the 1660s it was a profound realization. Marine bodies did grow in the rock, as many thought. Rather they were creatures that lived, died and were buried in sand and mud on the bottom of an ocean. Then disturbance moved the Earth, seas became dry land, muck turned to rock, and seashells ended up in high in the mountains far from the shore.

But why are there so many fossils near Lopez Lake … and off and on for miles to the north? This contradicts basic knowledge. Fossils are rare. In fact, fossils are so rare that Charles Darwin worried they would undermine his theory of evolution:

“Geology assuredly does not reveal any such finely graduated organic chain; and this, perhaps, is the most obvious and gravest objection which can be urged against my theory. The explanation lies, as I believe, in the extreme imperfection of the geological [fossil] record.” On the Origin of Species, 1859.

Not long after Darwin published On the Origin of Species, access to the fossil record grew dramatically. Pioneering paleontologists excavated thousands of fossils, taking them back to their respective institutions. The pace accelerated through the twentieth century and continues today. Even so, fossils remain rare. Though zillions of creatures have come and gone during the 3.65 billion years since life began, precious few died where they or their parts could be preserved. Most decayed. I’ve read that only 1% of all organisms that ever lived have been fossilized, though I wonder … how can we know?

There are spectacular exceptions, sites where fossils number in the millions. These are lagerstätte, meaning “storage places.” German miners use the term for rich seams of ore—mother lodes in English. There are two kinds of fossil mother lodes. In concentration lagerstätten, fossils are exceptionally abundant, but are mainly disarticulated bones or fragments that aren’t always useful in reconstructing organisms. 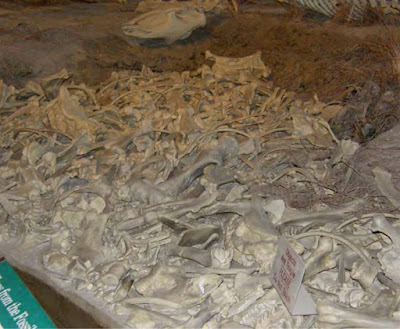 Above, bones from a dried-up waterhole, during a severe drought circa 20 million years ago. Below, reconstructed Dinohyus (Agate Fossil Beds National Monument Visitor Center). 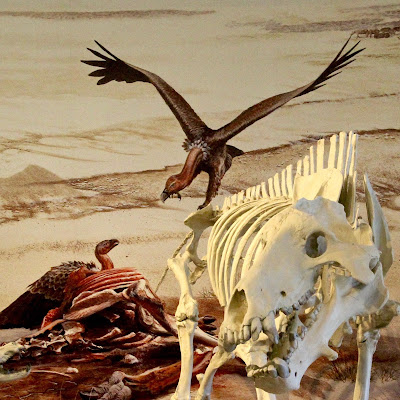 Most highly prized are conservation lagerstätten, where fate stepped in to preserve quality as well as quantity. Fossils include articulated (connected) skeletons, soft tissues of various kinds, even entire organisms (e.g., flies in amber). Soft tissue fossils can be quite beautiful, with minute details of hair, feathers, muscle tissue, even ovaries with eggs! And soft tissue preservation immortalizes organisms that have no bones or shells, such as insects, spiders and plants. 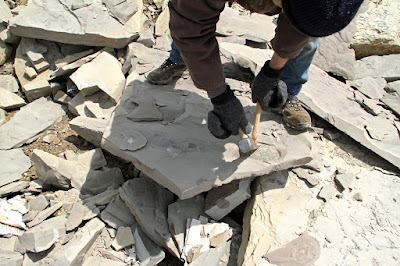 Above, Jack hunts for sea scorpions (Eurypterus) that swam the seas 400+ million years ago. These are extinct marine arthropods, and not true scorpions. After finding a claw on his first try, he uncovered two beautiful scorpions on his second (below)! Photos courtesy Jack Share of Written in Stone. 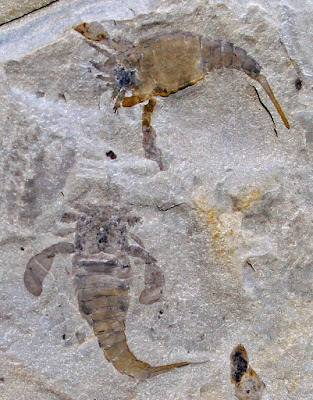 Here in Wyoming, we have a world-renown conservation lagerstätte, in the Green River Formation. It's a grand accumulation of exceptionally-preserved fossilized creatures that were buried in lake-bottom muck about fifty million years ago. Some layers are especially rich. The Fossil Butte Member, just 20 m thick, has yielded millions of exquisite fossils of fish, flies, bats, snails, spiders, parrots, mosquitos, crocodiles, and (best of all) plants.

Wyoming citizens are rightly proud of the Green River Formation. It’s considered one of three great conservation lagerstätte in the world (Nudds & Selden 2008), the other two being an oil shale deposit near Darmstadt, Germany, and the Florissant Formation of Colorado. But the order may be rapidly fading.

In Patagonia, Argentina, paleontologists are removing thousands of beautifully-preserved fossils from the Lago del Hunco Formation. Like our Green River Formation, it dates from the early Eocene, roughly 52 million years ago, and is composed of lithified lake sediments—specifically a lake in a caldera, a huge volcanic crater. Reports verge on ecstatic:

“There are white rocks that are jam-packed full of fossils, so many fossils that people cry when they see them. I’ve never seen so many beautiful fossils in one place.” —paleontologist Peter Wilf, to a New York Times reporter (italics added)

Elsewhere, Wilf declared Lago del Hunco to be one the most fantastic fossil sites in the world, because of the diversity of plants, insects, fish and amphibians. Gosses and colleagues (2006) called it “the world's most diverse Eocene flora.”

Fossils of the Lago del Hunco Formation record a time when a great diversity of plants—probably a rainforest—grew around a lake. Dead plant material that washed into the lake was frequently buried in sediments containing large amounts of volcanic ash and debris. That lake-bottom muck is now tuff containing beautiful soft-tissue fossils, and the rainforest is long gone. Paleontologists work amid dry desolate hills.

In 2003, Wilf and colleagues reported that the Lago del Hunco flora had a richness (number of species) that “exceeds that of any other Eocene leaf flora, supporting an ancient history of high plant diversity in warm areas of South America.” The known flora as of 2013 (listed here) includes ferns, cycads, ginkgos, several unidentified conifers, palms, eucalyptus trees, grasses, many members of the pea family, and more.
Will Lago del Hunco fossils bump our Green River Formation from its standing as one of the three great conservation lagerstätte? It’s too early to say; much work remains to be done. But an especially charismatic plant appears to be making fossil numbers and quality irrelevant. In slabs of white tuff, Peter Wilf found two tomatillos. Exceptional preservation combined with the popularity of tomatillos among salsa-aficionados was enough to grab the attention of the press.
Tomatillos are tomato relatives, with smaller green fruit. They’re distinctive for their thin papery inflated husks. To find these delicate structures preserved in rock 52 million years after death is mind-boggling! This discovery also upsets current thinking about the evolution of the Solanaceae, the family that includes potatoes, tomatoes and nightshades (discussed here and in Wilf et al. 2017).
I have to admit, I'm in awe of paleobotanists. I’ve done floristic surveys myself, compiling species lists for areas large and small. We collect plants in identifiable condition, with flowers or fruit, and compare them to herbarium material to verify identification. Sometimes we analyze relationships to well-documented floras elsewhere to determine affinities, and try to tease out biogeographic history and paleoclimate. This isn’t easy, even with fresh specimens, so to identify and coax stories from 52-million-year-old fossilized plants seems magical! Are paleobotanists part shaman—able to bring the dead back to the land of the living? Maybe they're more like Virgil, who visited the past himself and then returned to tell he found.

You gods who rule the kingdom of the rocks! You soundless Shades! …
Grant me to tell what I have seen! With your assent,
May I reveal what lies deep in the gloom of the Underworld!
(Aeneid Book VI, modified only slightly)

Thanks especially to Mike the rock guy, for help with paleontological issues!

Cutler, A. 2003. The seashell on the mountaintop; how Nicolaus Steno solved an ancient mystery and created a science of the Earth. A Plume Book.