What are these rocks telling us? 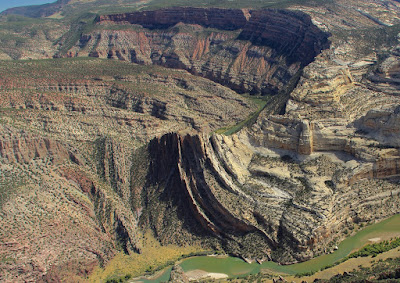 “The heart of field geology is going up to rocks and getting them to tell you their stories” (source).

Beneath us are hundreds of feet of rock, often in layers that can be read like chapters in a book … if only we could see them! Fortunately, rivers sometimes come to our aid, cutting down through rocks to reveal their stories. Probably the most famous is the masterpiece cut by the Colorado River—the Grand Canyon. This is a story 1.75 billion years long, told in a stack of rocks a mile thick. The tale is fairly straightforward; sediments were turned to rock but otherwise not much altered. They remain mostly flat, like an immense layer cake.

But sometimes the reading isn’t so easy. Consider the cuts made by the Yampa and the Green, near their confluence on the south flank of the Uinta Mountains. I spent a long time pondering them, and never really understood the whole story. But I didn’t mind—it was a beautiful and remarkable place to be.

“Like an expression of frozen movement, or of time standing still, these faults accent the grandeur of the scene and stir wonder in the heart of the viewer.” Wallace Hansen, 1969

First I had to figure out which river was which. Fortunately I had help—the Harpers Corner Trail Guide (river labels circled: yellow – Yampa, green – Green). 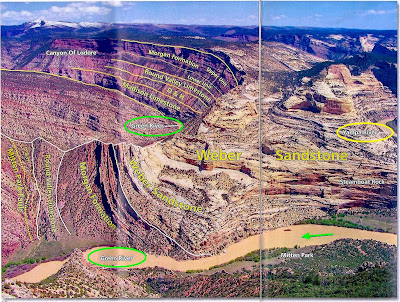 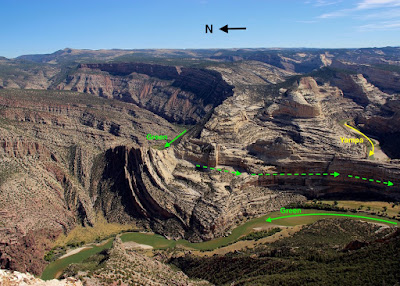 A Google Earth view helps:
The Yampa and the Green are thought to be superimposed drainages. There was a time when the Uinta Mountains were nearly buried in their own debris—sediments eroded off the range—and the Yampa and the Green flowed across the thick layer of debris as broad meandering streams. But then the region was uplifted, and erosion exhumed the buried mountains. The meandering rivers were “lowered” onto the underlying rocks, but they kept cutting down and maintained their circuitous paths! The Yampa is especially sinuous, winding for 22 miles through narrow canyons to cover less than ten air miles before joining the Green. [The whole story is more complicated; see Hansen 1986).]
After making the sharp bend back north, the Green heads west and crosses the Mitten Park Fault, which it has exposed spectacularly for all to enjoy.
These rocks started as sediments laid down on beaches, shallow sea floors, and in deltas and swamps, layer after layer. Next came humongous fields of sand dunes, and so on … for millions of years. The sediments were lithified, becoming a stack of mostly flat rock layers.

So why are they no longer flat? In fact, why are these rocks so severely deformed?! It's because they got caught up in mountain-building—specifically uplift of the Uinta Mountains between 70 and 40 million years ago.
The folded rocks and fault were clear, especially with the trail guide to help, but the story behind them was not. This is not an easy read! The steeply-tilted rocks may be part of the local monocline—the huge step-like fold visible to the east. It’s broken by the Mitten Park Fault, with rocks to the east down-dropped relative to those to the west. Perhaps they were drug along the fault as the blocks moved past each other, creating the spectacular folds or enhancing those already there.
The timing is unclear. Some sources suggest the Mitten Park Fault came to be during the main uplift of the Uinta Mountains. Or it may represent a later stage, when the crest of the eastern Uintas collapsed (wow!). Movement may continue into the present.

In any case, these folded faulted rocks lay deep underground until the Green and Yampa Rivers finally cut down far enough to expose them.

Contrary to appearances, it wasn't a cataclysm that produced these tortuous rocks—just slow steady work. Crustal plates shifted a bit, rocks gradually folded, fractures grew inch by inch, maybe there was an occasional earthquake. This went on for tens of millions of years. Then the rivers went to work, slowly excavating dirt and debris, eventually exposing the rocks. But even with a plot this monotonous, a story tens of millions of years long can have a dramatic climax.

This is the last post from my September trip to the Uinta Mountains—a place I had long wanted to visit (~30 years) and finally did. Two weeks were only enough for an introduction; I need to return. Many thanks to Mike of CSMS GEOLOGY POST for the encouragement, and for recommending books to read, places to go, things to see. 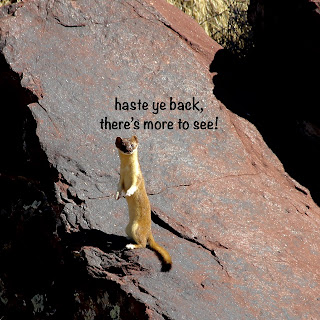 Untermann, GE, and Untermann, BR. 1969. Popular guide to the geology of Dinosaur National Monument. Dinosaur Nature Association. (out of print)