Erosion in a Land of Sky and Grass 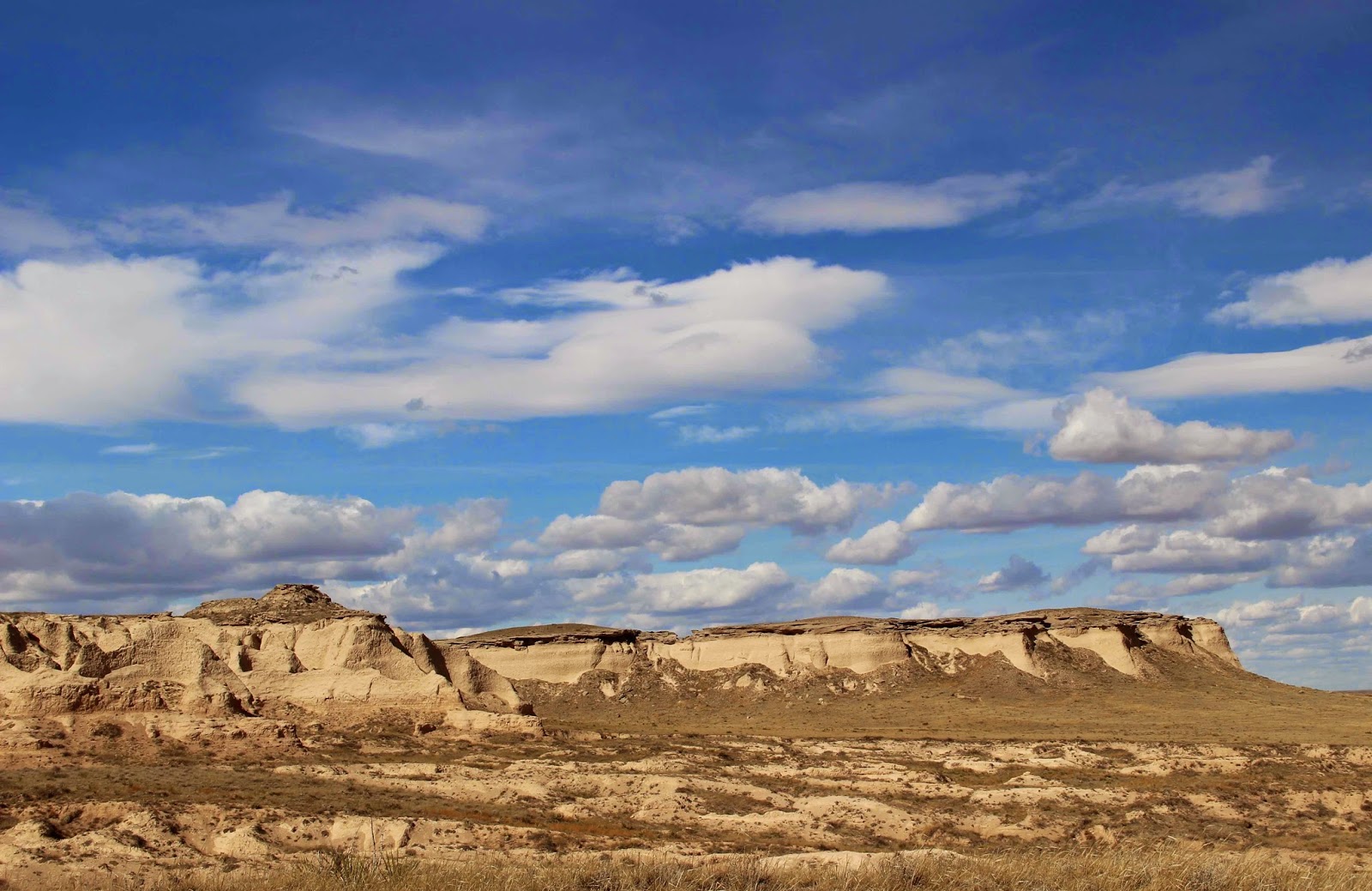 Last week I was faced with a trip to Fort Collins.  Laramie isn’t quite big enough to satisfy every material desire, so occasionally I brave the urban sprawl and crazy traffic below the Colorado Front Range to do some shopping.  As an incentive I planned a geo-trip afterwards.  The theme was erosion.

The spectacular Front Range always impresses me, even with the explosion of tech centers and bedroom communities below.  I contemplated its geological history as I drove south on I-25.  Think mountains, think uplift … but erosion usually is just as important.  In this case, two major episodes of erosion contributed to the landscape, and not just in the mountains but also far to the east.

The Front Range is part of the eastern flank of the Rocky Mountains.  Uplift began roughly 60  million years ago.  Erosion set in almost immediately and continued off and on for roughly 50 million years.  First the cover of sedimentary rocks was removed, then underlying hard rocks were sculpted into today’s charismatic alpen forms.  Massive amounts of debris were carried off in the process, deposited as far away as eastern Nebraska and Kansas.  A huge debris apron was created – a giant wedge of sediments sloping to the east.  At its maximum, the apron was so thick that the mountains were largely buried, in their own detritus.  Only the high peaks were exposed.  The Rockies were just scattered minor mountain ranges.
Then things changed, as things do, and a new episode of erosion restored the glory of the Front Range.  Streams cut into and carried away the sediments of the debris apron.  The mountains were exhumed, probably in less than two million years.  What changed?  The cause of the shift to erosion is debated.  Perhaps the climate became wetter, perhaps the entire region was uplifted, perhaps both.

Exhumation didn’t stop at the base of the mountains.  Currently the debris apron has been removed almost to Nebraska, Kansas and Wyoming.  This excavated area is the Colorado Piedmont.  Beyond, the debris apron is still in place and forms the High Plains.
From Fort Collins I drove east across the Colorado Piedmont through bedroom communities and heavy traffic to Greeley for information (more on this later), and then northeast toward the High Plains Escarpment.  The transition from Piedmont to High Plains is often scenic, where erosion has carved arroyos, escarpments, cliffs, breaks and isolated buttes.

My destinations were Pawnee Buttes and the surrounding Pawnee National Grassland, public land where I could freely wander.  It was added to our network of public lands in 1960, along with 19 other National Grasslands, but its origins date to the late 1880s when homesteaders began to settle the western High Plains.  For 50 years, people full of hope – but badly misled – tried to survive in this harsh country.  They met with disaster after disaster.  Cattle died in blizzards, wheat burned in prairie fires, tornados destroyed homes.  Worst of all, the rain didn’t come the way the railroad companies, eager for customers, had told them it would.

Folks settled here on the promise of dryland farming, with all water supplied by rainfall.  But the rain was unreliable.  It varied, greatly.  The first bad drought lasted from 1880 to 1890; there was another in ’93 and ’94.  Then dreams came true.  Rainfall was sufficient, even abundant.  Farmers raised bumper crops, livestock thrived, towns grew.  But starting in 1931 there was so little rain that plants in the plowed fields and heavily-grazed pastures simply shriveled up and died.  Then the soil blew away.

These were the Dirty Thirties, the Dust Bowl years.  People went bust.  Towns shrank.  Some disappeared entirely.  The Federal government stepped in and bought out the destitute farmers, paying them for their land.  With rest and revegetation, the worn-out land recovered.  It became Pawnee National Grassland in 1960.

I knew my plan was a good one when I stopped at the Grassland’s District Office in Greeley.  It was small and a bit worn.  Inside, a lone employee was able to answer all my questions.  He offered free brochures on history, wildflowers, birds, paleontology and more, “available outside when we’re closed.” 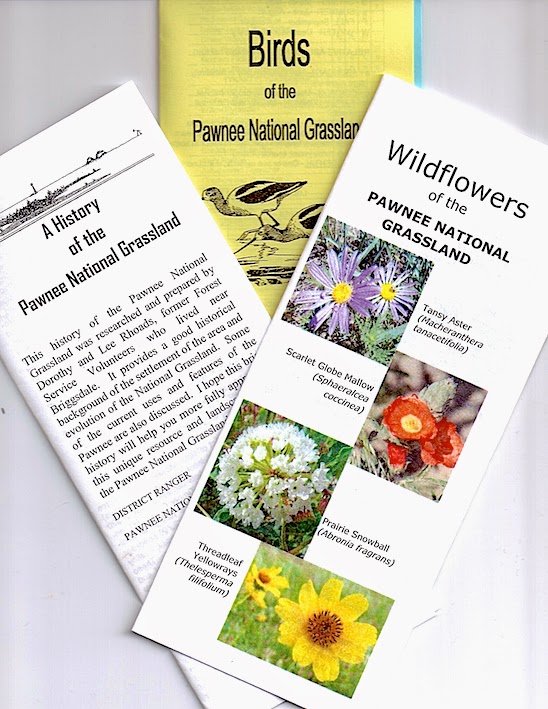 My enthusiasm grew as I drove east.  Traffic dropped off dramatically and I could ponder the landscape.  Bedroom communities were replaced with rolling terrain dotted by occasional oil and gas facilities (part of the oil-rich Denver Basin lies below the surface).  The stress of Fort Collins faded from memory.

It was a land of sky and grass, both so expansive that photographs were unthinkable.  Beauty and awesomeness came from the immense vistas, which seem to go on forever … maybe even to the edge of the world!  It was impossible to capture them in images; you will just have to believe me.

The light and air about me told me that the world ended here: only the ground and sun and sky were left, and if one went a little farther there would only be sun and sky, and one would float off into them, like the tawny hawks which sailed over our heads making slow shadows on the grass.  Willa Cather in My Antonia

Pawnee National Grassland is a patchwork of public and private land traversed by gravel roads.  A Travel Map (free at the District Office) is essential if you want to wander without trespassing.  However the route to the Buttes was clearly signed, no map needed.  It led to a small parking lot, picnic shelter, vault toilets and an interesting and scenic hike. 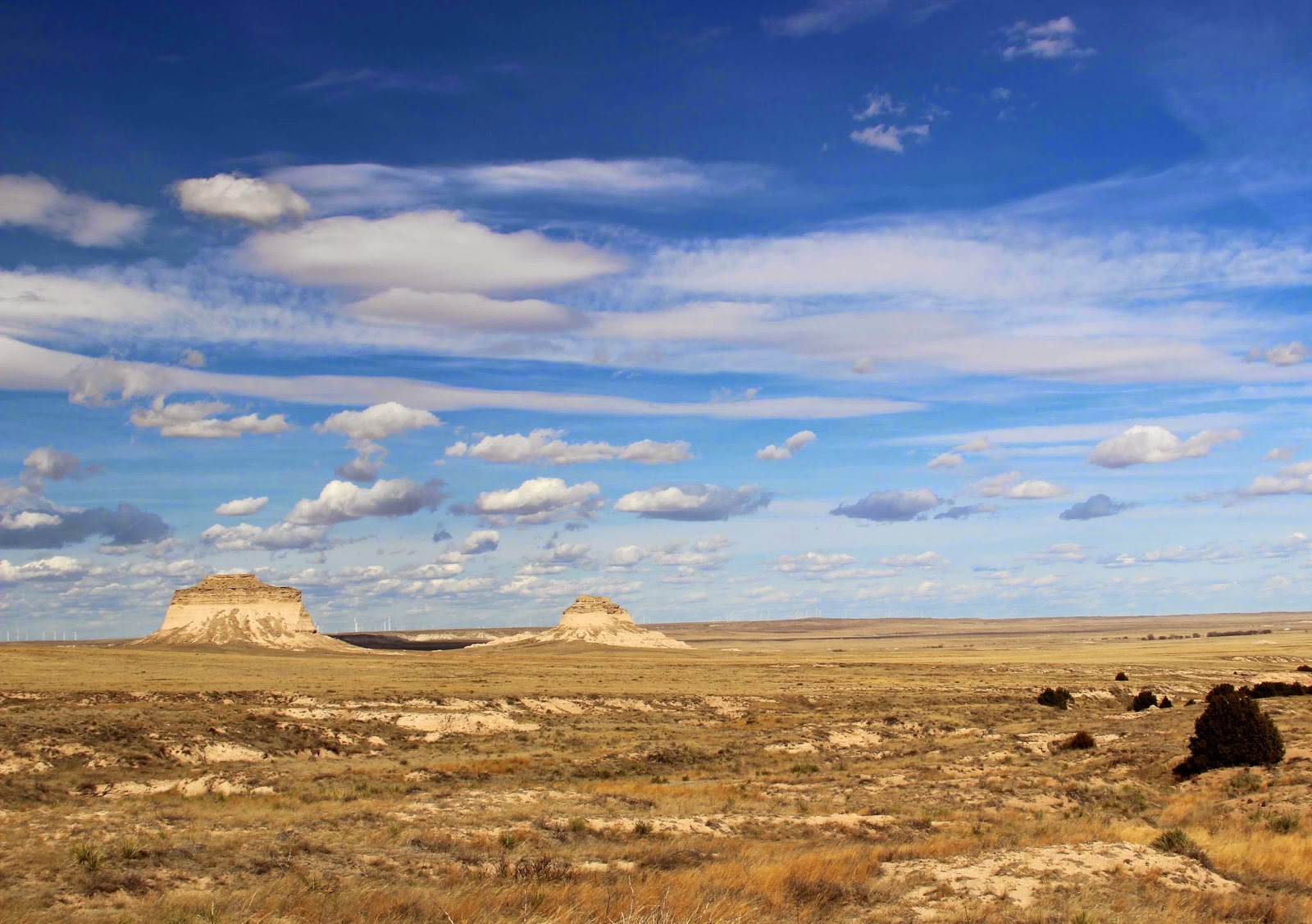 The Pawnee Buttes and small ridges nearby are relics of the High Plains Escarpment, which is now a short distance to the north and east.  Rocks exposed here date from the Tertiary Period, as do all strata of the debris apron (diagram below).  Most are relatively-unconsolidated, soft, and easily-eroded.  The Buttes and ridges still stand because resistant rock caps protect them from erosion … for now.
The out-and-back trail to the Buttes crosses grassland, descends an eroding drainage, winds around to the north side of Lipps Bluff, and continues east to the Buttes (three miles round trip).  A short distance from the parking lot the trail splits, with one fork crossing Lipps Bluff.  When I visited, it was closed to protect nesting raptors.
Erosion was evident everywhere, especially along the trail. 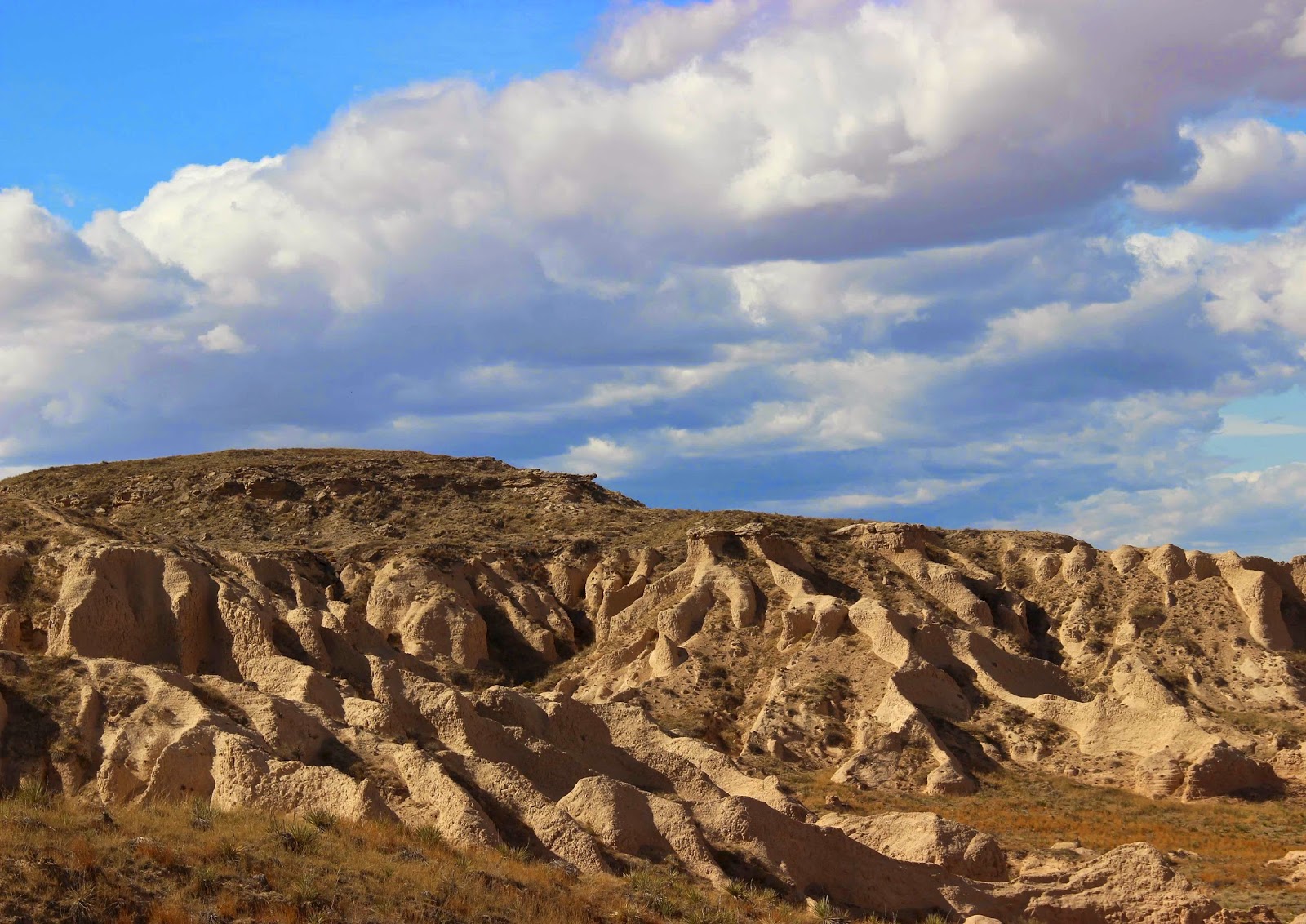 I liked the patterns of short deep gullies in soft rock.  This is badlands topography – rapidly changing, sparsely vegetated. 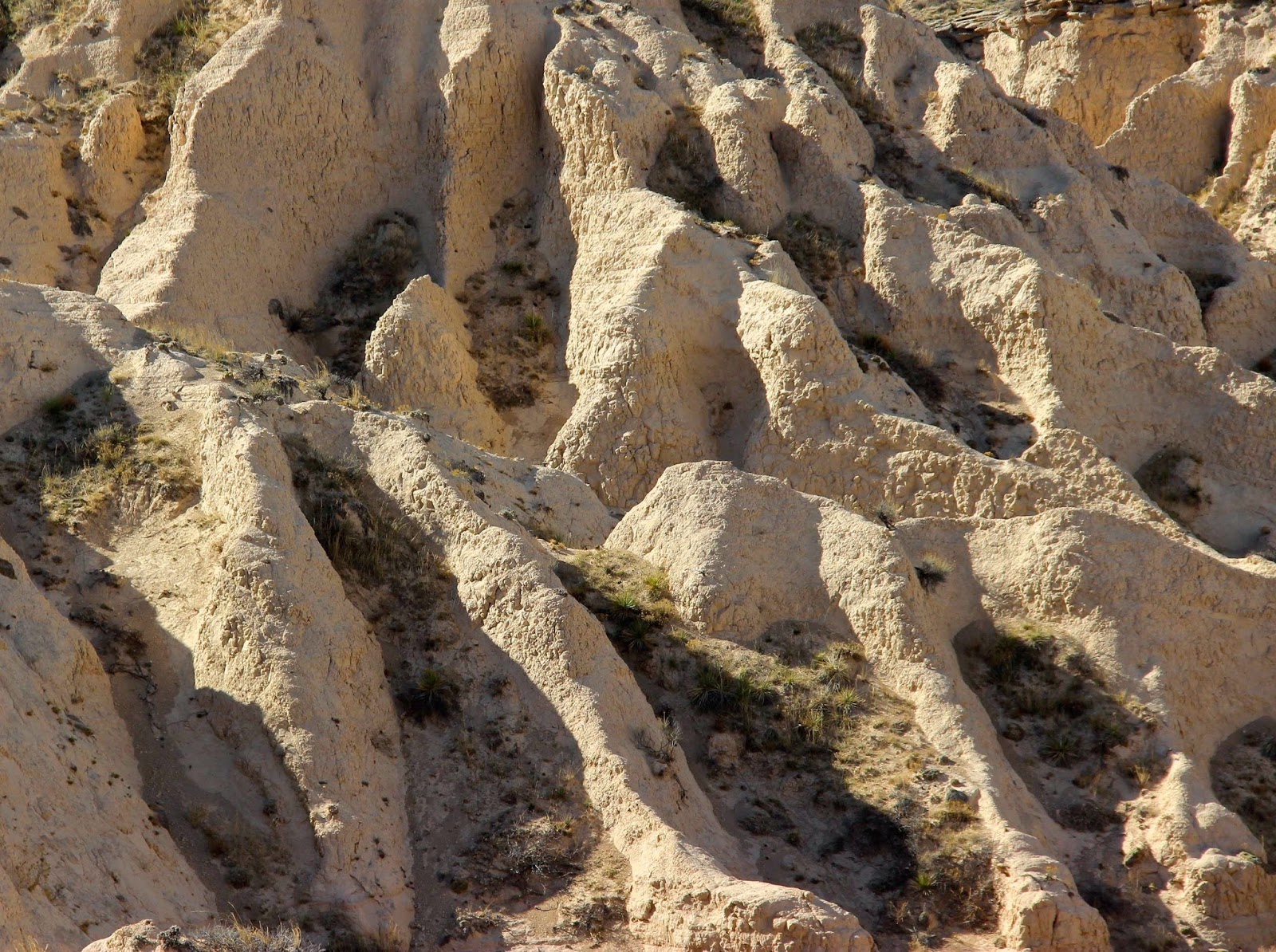 The landscapes here are at a scale suitable for photos … thanks to erosion. 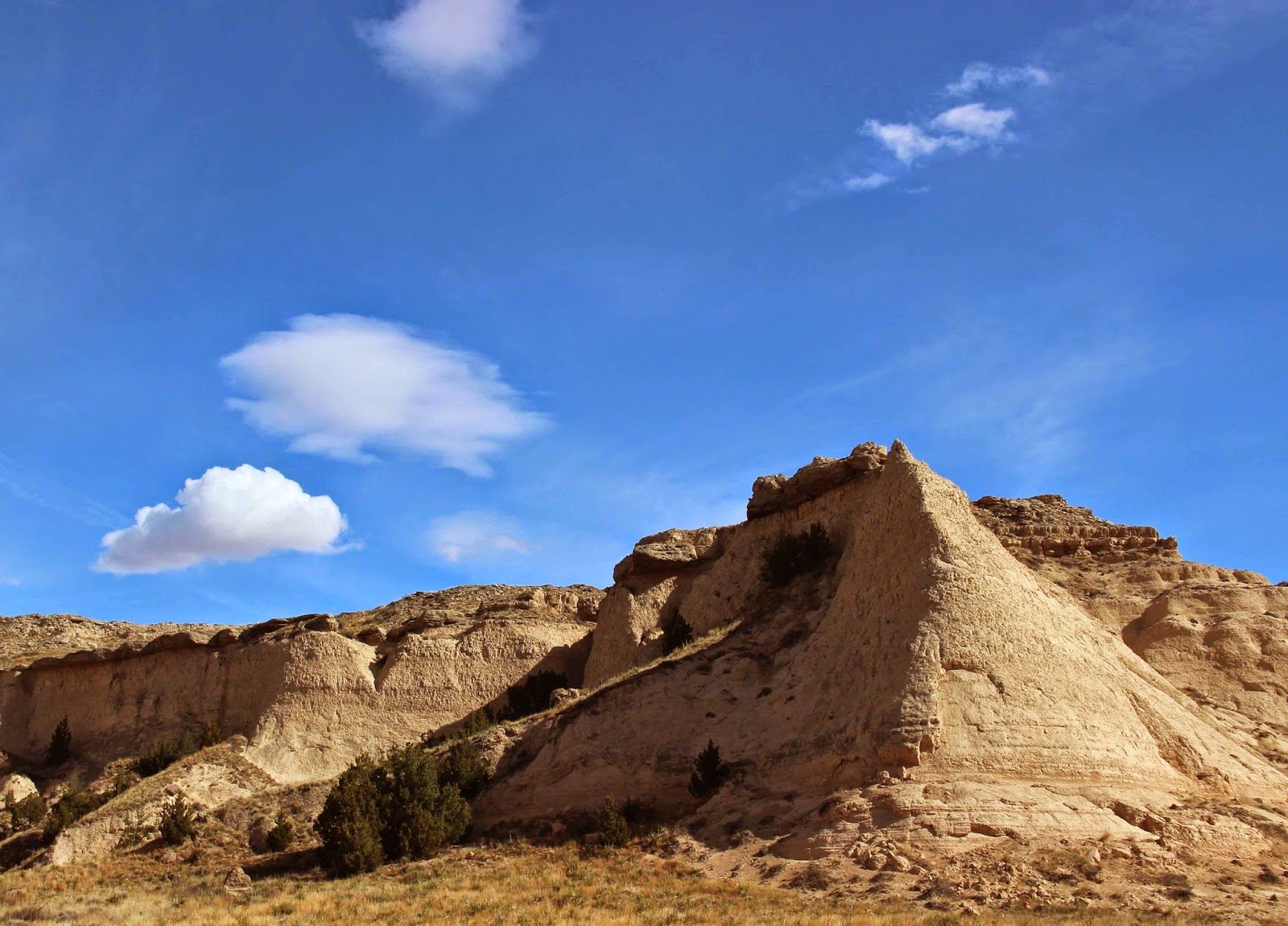 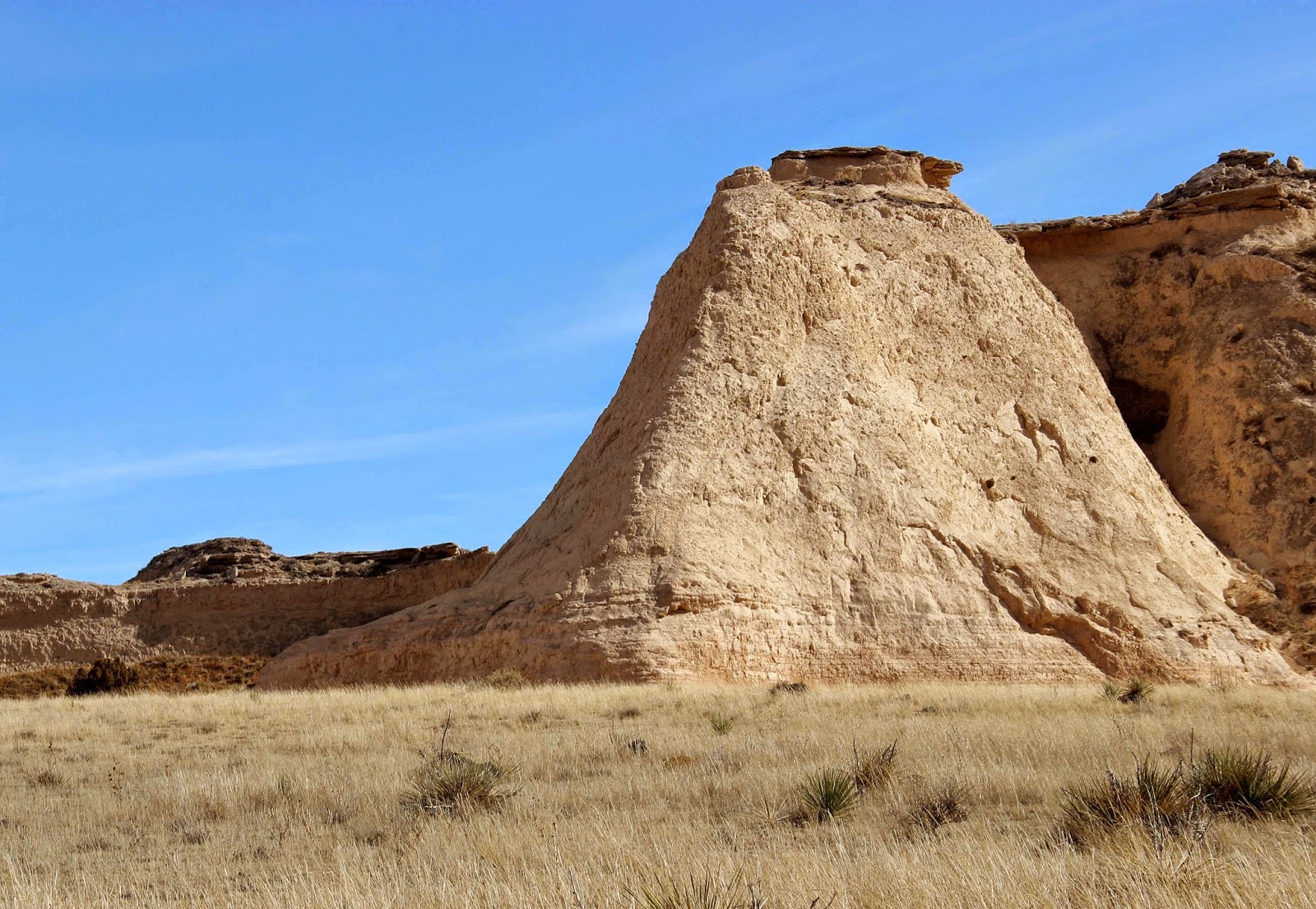 The growing season had barely started; grasses were mostly brown and only a few early wildflowers were blooming.  Peak season for spring wildflowers starts in another month or so, though with the drought this year it may be underwhelming.  A report on plants of the Grassland is available here (PDF). 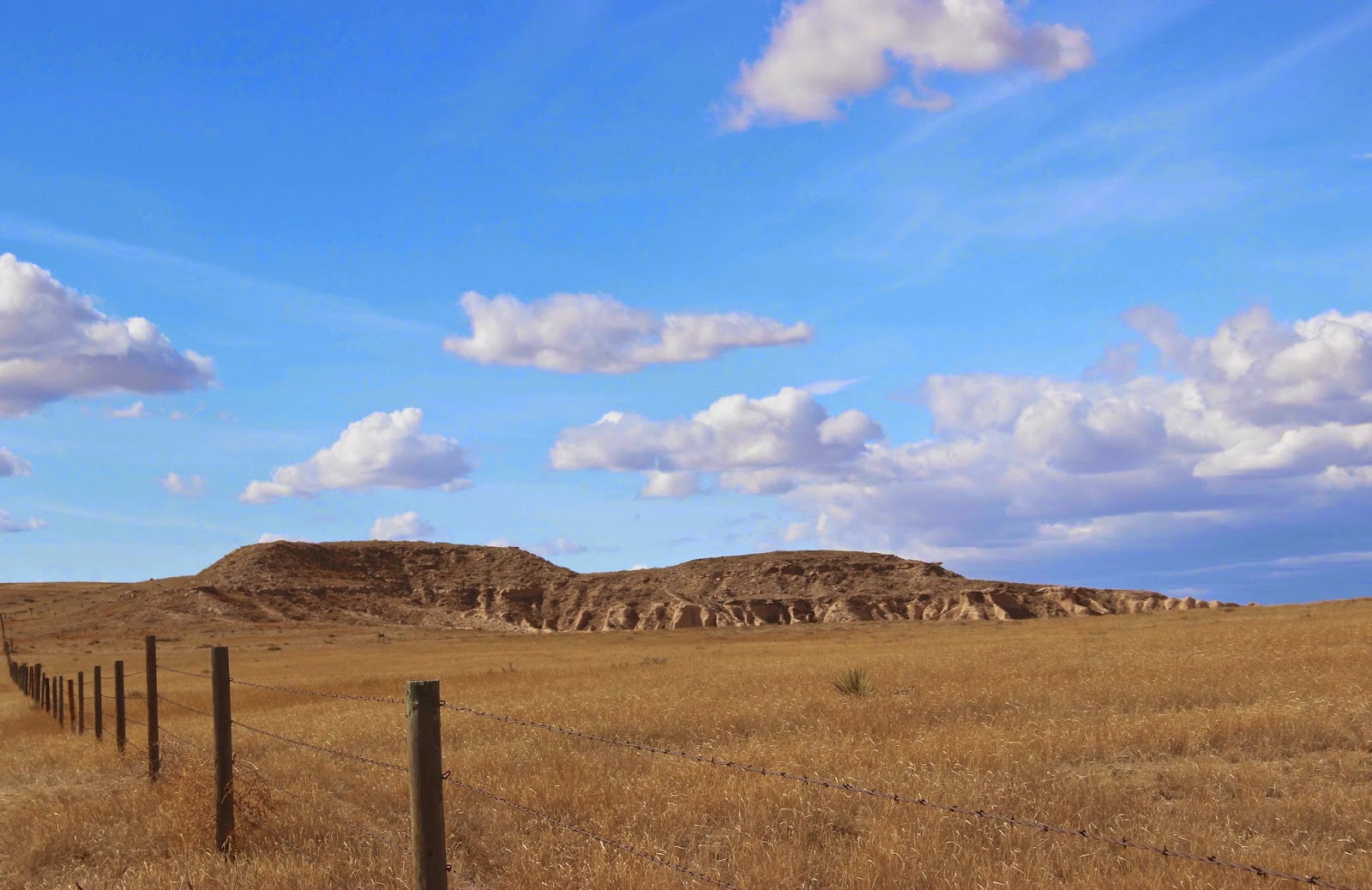 I was pleased with my trip to Pawnee National Grassland, a welcome respite from the frenzy to the west.  The hike to the Buttes was scenic and peaceful, with lots to see and think about.  I plan to return when spring wildflowers are in full bloom, and again when the Lipps Bluff trail is open.

Given my enthusiasm for the area, I may be misleading the reader.  The Grassland is hardly wilderness; in fact it’s busy on weekends.  Until recently most human activity centered on natural resources – grazing, wind farms, oil and gas extraction.  Now recreational use has exploded with population growth along the Front Range, leading to intensive management. But there are benefits … a birding route, natural history brochures, a campground and trails just for hiking.  A new target-shooting range has reduced the dangers of dispersed shooting. Off-road vehicles are restricted to designated routes.  Still, it’s probably best to visit during the week. 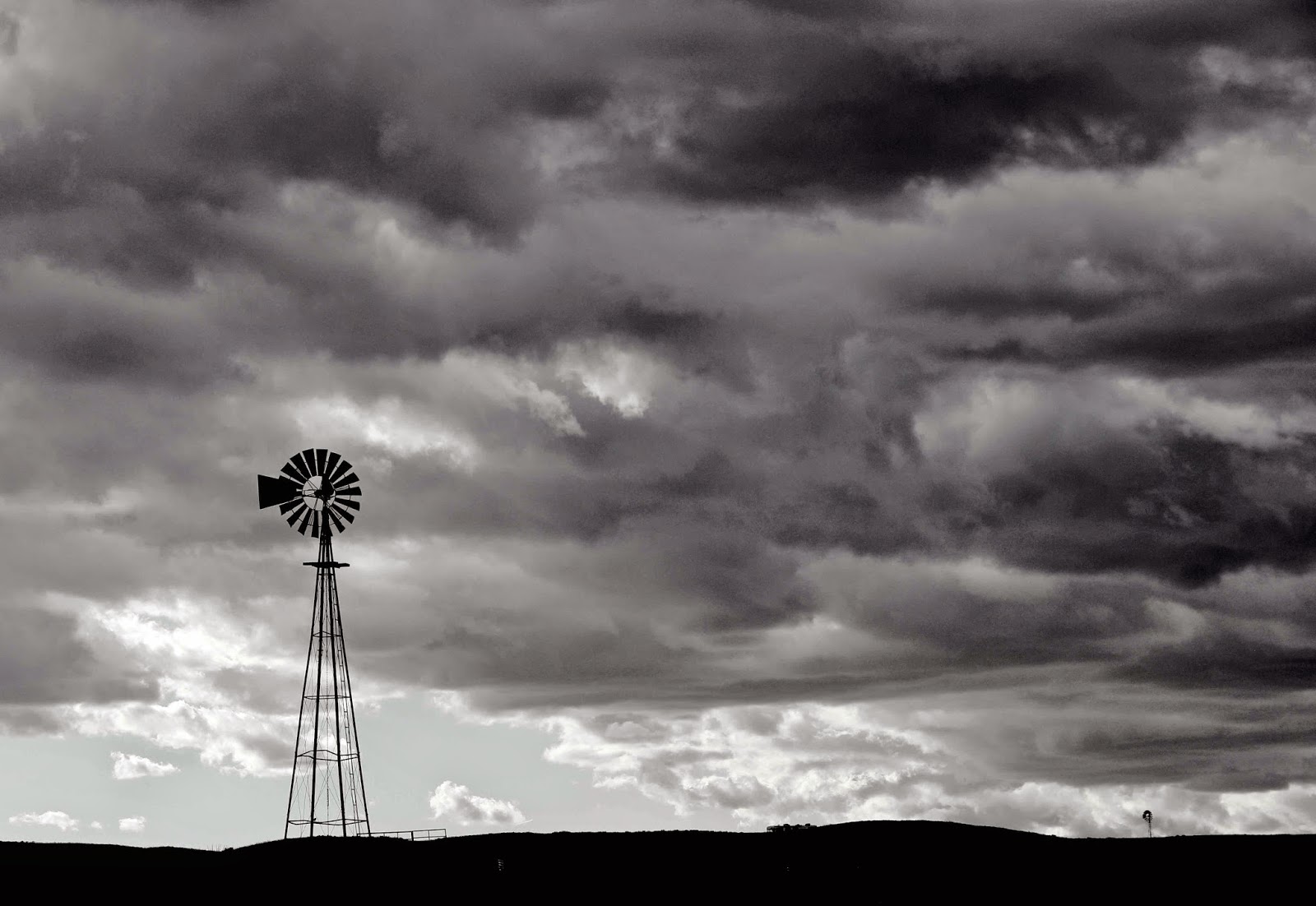