Hunting Pterosaurs by the Sundance Sea 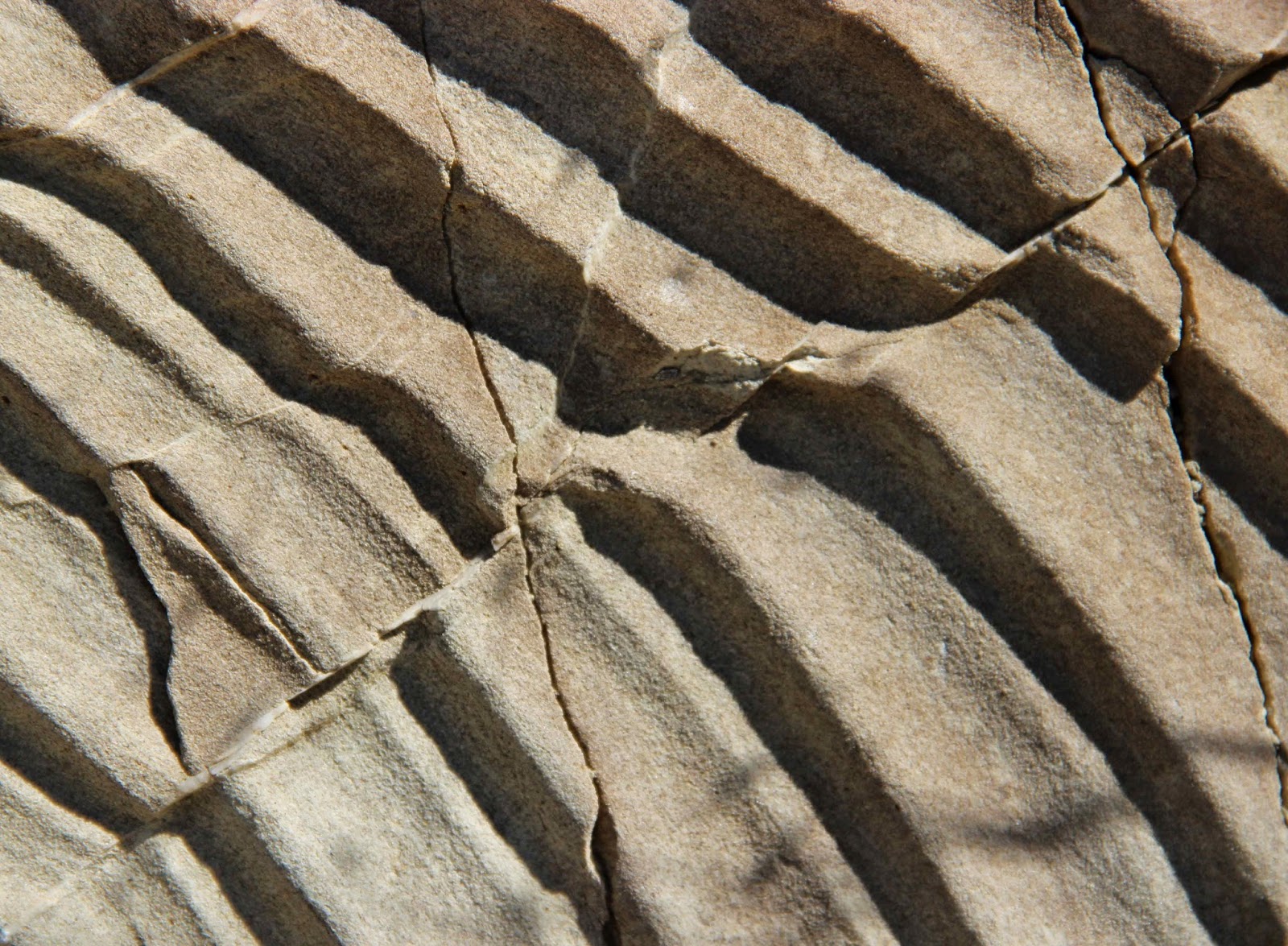 This post is part of a series about my recent tour of the Heartland of Laramide Tectonics in south central Wyoming.  I spent a good amount of time among rocks of the Jurassic period, when dinosaurs ruled.  I was hunting pterosaurs -- actually, pterosaur tracks.  I finally found some, but not where I expected.

During late Jurassic time, about 155 million years ago, a narrow inland sea extended south across western North America.  In Wyoming we call it the Sundance Sea because its beaches are now a kind of sandstone first described near Sundance, Wyoming.  Pterosaurs gathered and strolled on the beaches, perhaps feeding on invertebrates buried in the sand.  They left footprints, some of which were preserved well enough to become ichnofossils when the sand became sandstone (these are fossils created by creatures, rather than of their body parts).

Pterosaurs are often called flying dinosaurs but technically they’re not, nor are they pterodactyls, a better-known flying reptile of the time.  For more explanation, see the Wikipedia overview of pterosaur classification.  They may well have been active flyers, for their wings were complex and their bones hollow.  They ranged widely in size.  Some were monsters, like Quetzalcoatlus northropi below (source). 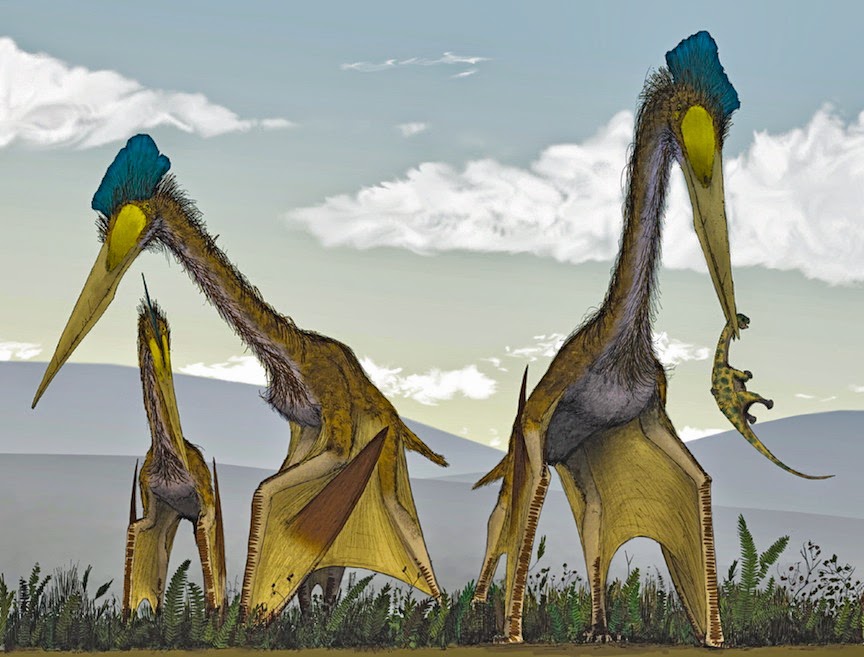 The Alcova pterosaurs were fairly small, with footprints up to five inches (130 mm) long.  In fact, we know them only from their fossilized footprints.  Thus they are ichnospecies (Pteraichnus stokesi and Pteraichnus saltwashensis).  They left two kinds of prints -- webbed back feet and the three claws on each forelimb (wing).
Knittel et al. (2004) described the Alcova area as one of the few places in the world where pterosaur tracks are well-preserved.  They also provided a few hints as to where tracks can be found:  “in cross-bedded ripple-marked sandstone” of the Sundance Formation.  Cross-beds are indicative of old sand dunes.  Ripple marks are made by waves on beaches.  Both are easy to recognize, so I was optimistic. 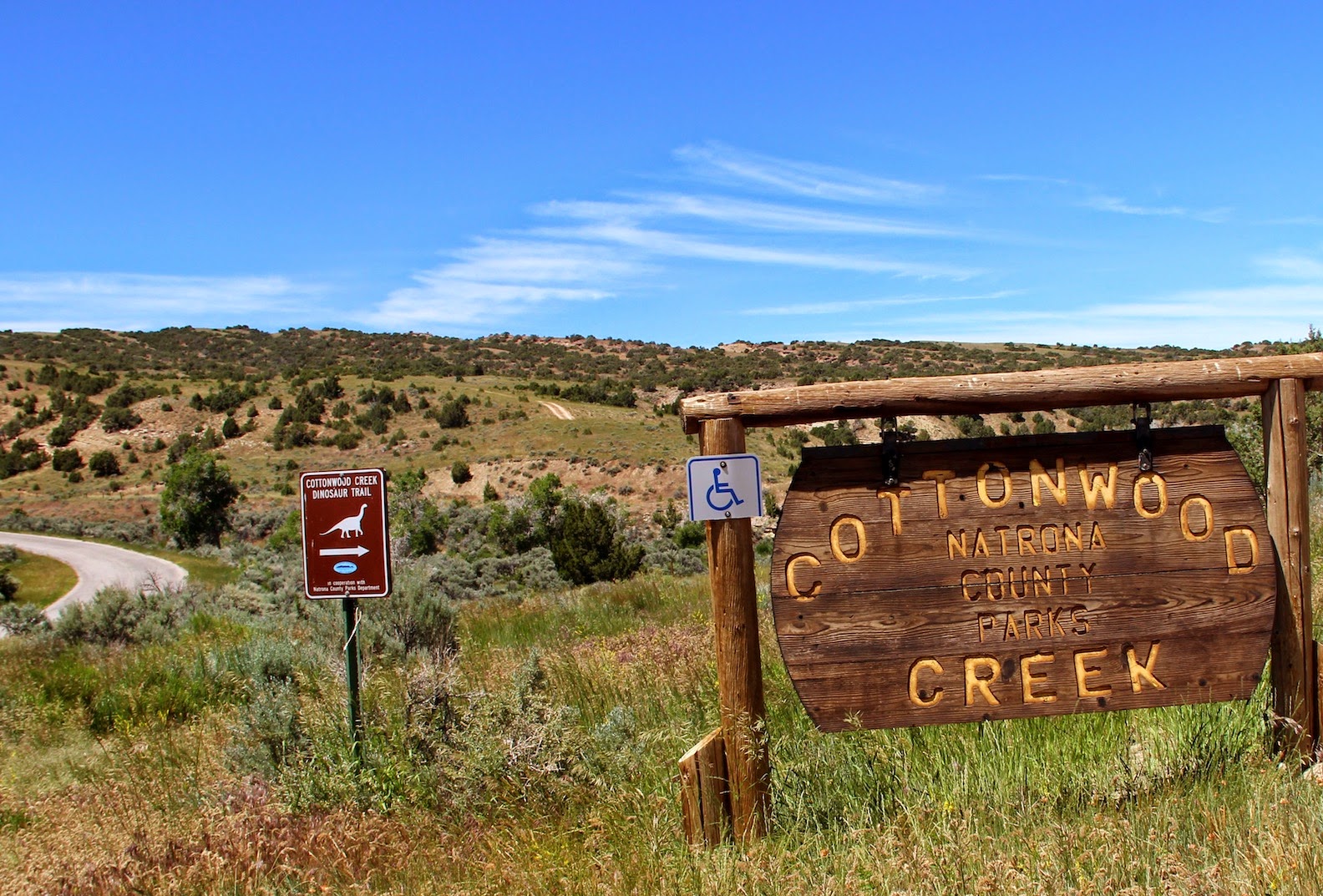 The obvious place to look was along the Dinosaur Trail off the Cottonwood Creek Road.  It was a hot bright afternoon and the slope looked steep.  But the dogs were game to go, so after studying the geologic cross-section at the trailhead, we headed uphill.
The trail climbed steadily, passing through increasingly younger rocks.  Signs marked each formation, and often members (subunits) within. 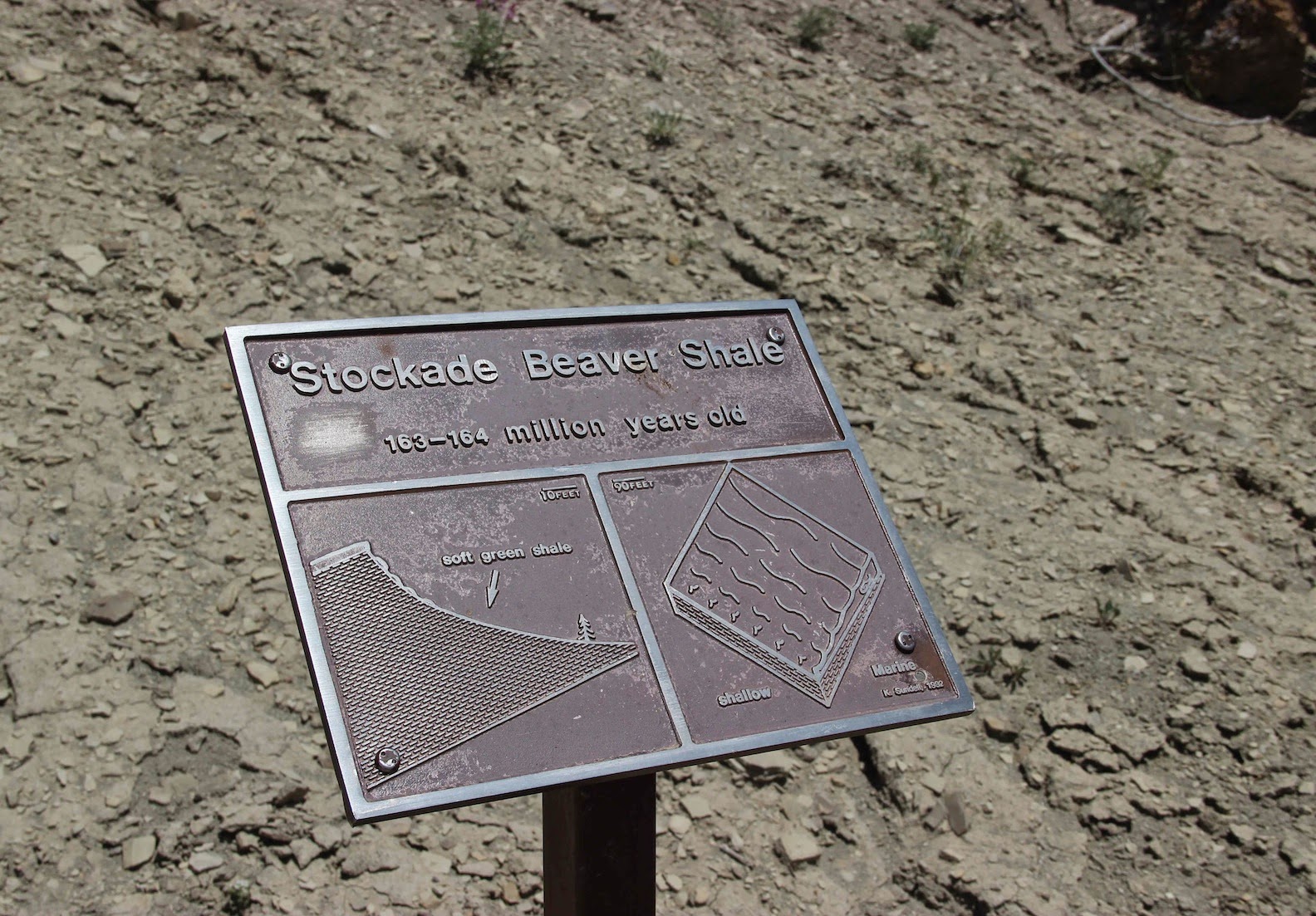 The slope was littered with spectacular giant boulders of the Lakota Formation (earliest Cretaceous) that had rolled down from the top of the ridge.  The Lakota is a mix of cross-bedded sandstone and chert-pebble conglomerate.
We passed through the Sundance Formation -- the ripple marks were obvious.  But I saw no pterosaur tracks even though a sign made clear when we were in the Windy Hill member, where the tracks occur.
Above the Windy Hill member of the Sundance Formation was the much more famous and fossil-rich Morrison Formation.
At the top was the Lakota Formation, source of the monster boulders passed en route.  There were spectacular views as promised.
Then we walked back.  I didn't see any pterosaur tracks on the way down either.

That evening we camped across Alcova Reservoir from the Dinosaur Trail, with an excellent view of the slope and strata.  Formations in the photo below are based on Knittel et al. (2004). 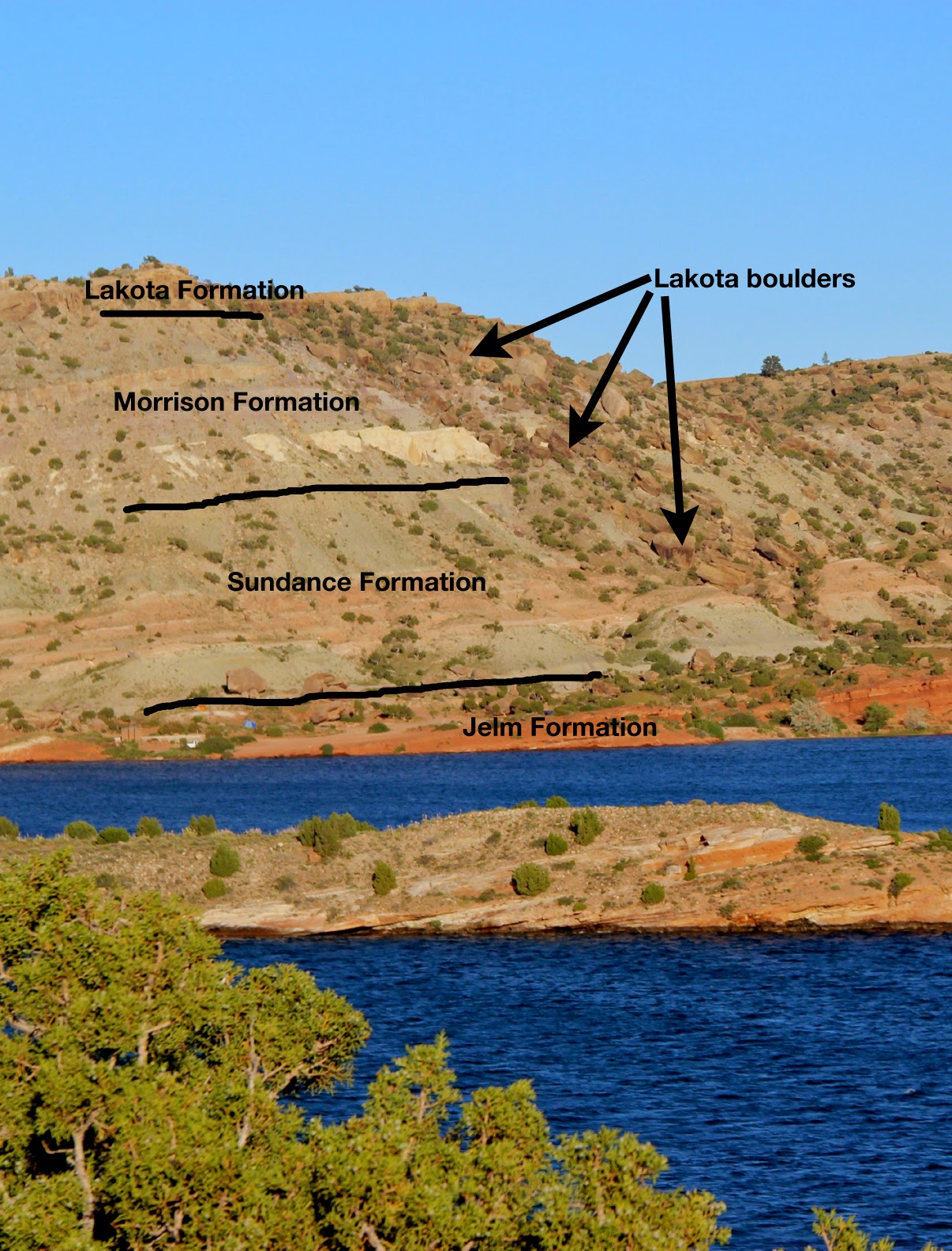 The next morning I spent time photographing steeply-folded sedimentary rocks on the southwest side of the Alcova Anticline (see this post).  I met up with the Lakota Formation again.  It’s well-cemented and resistant to erosion, so can form spectacular outcrops.
The Sundance Formation was also tilted very steeply -- like the outcrop below.  Then something caught my eye ... are those ripple marks up there? 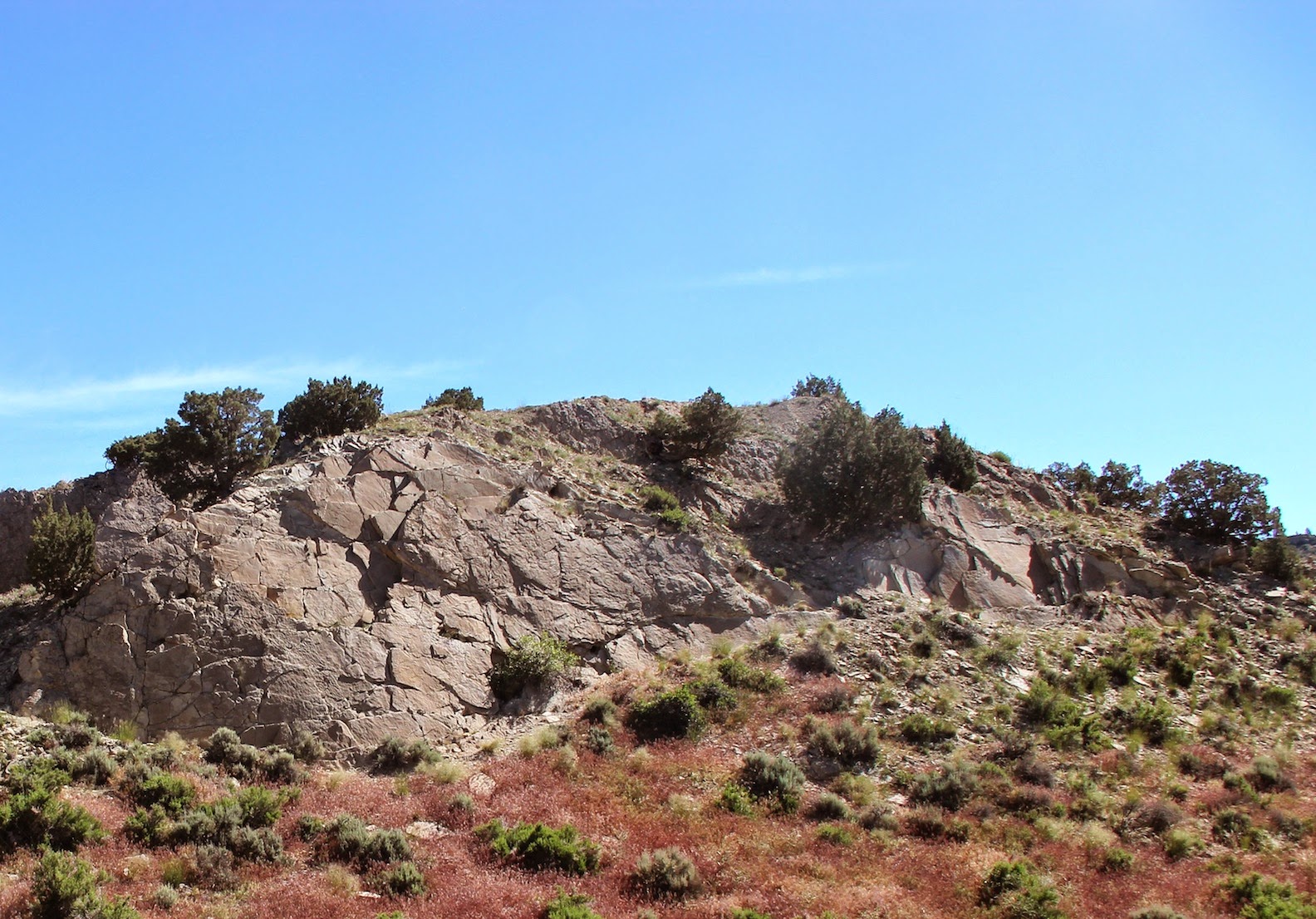 Yes, definitely ripple marks!  Might there be pterosaur tracks nearby?
Then a school bus appeared.  Several dozen people debarked and marched off to a rocky slope.  I asked the bus driver if they were geologists.  She smiled, “all I know is they’re a bunch of teachers.”  I caught the group and asked again.  “No, we’re science teachers, but this is a geology stop.  He’s the guide.”  The guide also was “just a science teacher” but knew that there were indeed tracks nearby.  We jogged down the road, and he kindly pointed out where pterosaurs had passed 155 million years ago.

This is the fourth post in a series about the “Heartland of Laramide Tectonics” in south central Wyoming.  Others include an overview of the Folded Land, a look at the Great Unconformity and a tour of Permo-Triassic Redbeds.  More highlights will follow.