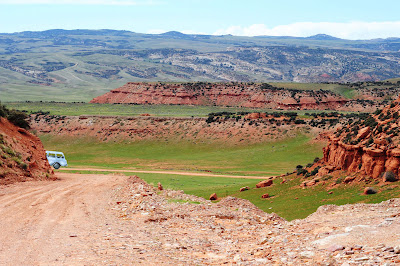 This month's Accretionary Wedge is at Maitri's VatulBlog; the topic is geo-injuries.  I’ve not had any memorable ones, even after 35 years.  But I can’t say the same for my vehicles ...


My first field vehicle was a 1968 Volkswagen squareback, also known as the Type 3, the 1600 Variant, and, near the end of our relationship, the Antichrist (as in The Gods Must be Crazy).  I bought it for $400.  It had electronic fuel injection and a computer (!), but no front breaks as the calipers had been pulled off.  A friend replaced them.

During my three field seasons as a grad student, the Variant was terrific.  It had fairly high clearance, and was surprisingly able on bad roads, probably because the engine sat over the back axle.  All problems were minor and easily fixed in situ.  In 1985 I overhauled the engine, thanks to that amazing masterpiece for Compleat Idiots titled “How to Keep your Volkswagen Alive” by the patron saint of backyard VW mechanics, John Muir.  The Variant was happy, and ran beautifully. 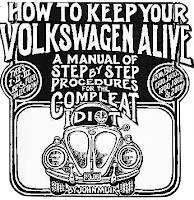 Next I got a real job, a dream job really -- as botanist and sole employee of the Wyoming Natural Diversity Database, appropriately acronymmed “WYNDD”.  But it was a shoe-string budget -- no motels, no restaurants, no field vehicle.  I kept driving the Variant, to the far corners of Wyoming. 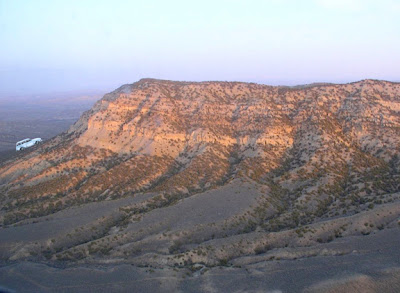 The old car held up well in spite of its years.  All problems continued to be minor and easily fixed.  But then ... 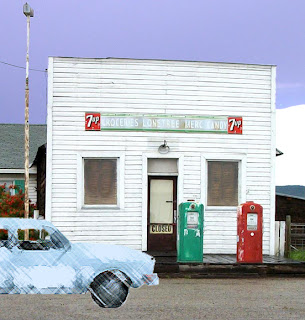 ... there were two major breakdowns, both in Lonetree, Wyoming, both on projects involving the rare Uinta greenthread.  (ok ... these weren’t geo-injuries, they were phyto-injuries.)
The Unita greenthread grows on the summit margins of several flat-topped "mountains" -- remnants of mid-Tertiary alluvial fans that sloped down from the high Uinta Mountains to the south.  Wind blows all fine material away leaving gravel, cobbles and boulders.

The first incident was not terminal.  Near the end of field survey, the engine periodically lost power but still ran. The problem became consistent and I drove 300 miles back to Laramie via every side road available.  But sometimes I couldn’t avoid driving uphill on Interstate 80 at 30 mph.  Fortunately, I was never pulled over. 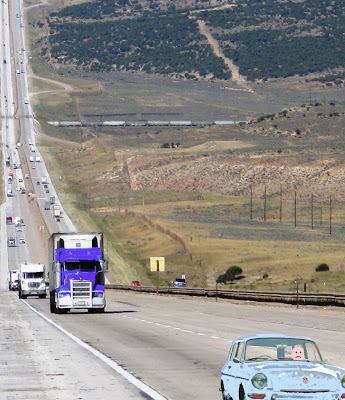 I consulted with John Muir who suggested the points driving the fuel injectors were bad.  The local mechanic thought probably not, but sold me a used set which fixed the problem.  It was true ... the Variant had made it all the way home on two cylinders! 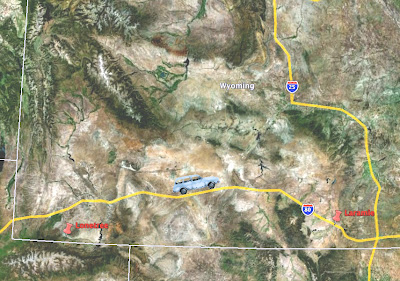 The next episode did not have a happy ending.  In Lonetree once again, the engine refused to run even though it turned over ... and over and over.  We pushed, we towed ... no luck.  It stayed in Lonetree, I took the Greyhound bus to Laramie, borrowed a pickup, rented a dolly, drove back to Lonetree, and towed the Antichrist home.


John Muir advised checking the electronics of the fuel delivery system -- sensors, wiring, computer, etc.  I tested.  I replaced.  I even tried a different computer.  I gave up when I found a 1978 Datsun pickup for sale for $900.  It only broke down once.

When I think back on those adventuresome days, I miss my Variant a little and even get a bit misty-eyed.  It served me so well.  But in truth, I’m happy not to be dealing with an ancient electronic-fuel-injected air-cooled engine anymore. 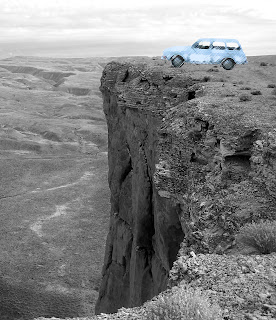 The Variant's last incarnation, as Antichrist, was not all bad.  It was the inspiration for my first web publication, at Car Talk Haiku: