Our life in this world-
to what shall I compare it?
It's like an echo
resounding through the mountains
and off into the empty sky.
-- Zen monk Ryōkan (1758–1831)

Mountains are massive, abiding and immutable, while we are nothing more than faint echos, fleeting images, tiny bursts of light, insignificant specks of dust.  In the 350 years since Sumiyoshi Jokei painted this image of Mount Fuji, ten generations of pilgrims have come and gone while Fuji stands unchanged.  Yet if we look carefully at rocks, if we use them to peer into the past and conjure up the world they came from ... we find that mountains too are ephemeral. 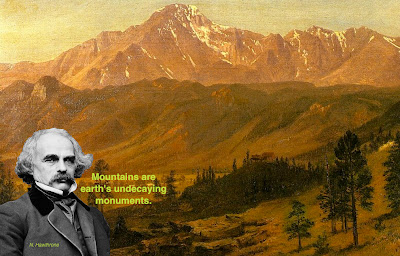 Sorry to disappoint you, Nathaniel, but mountains decay. Here are their remains to prove it. 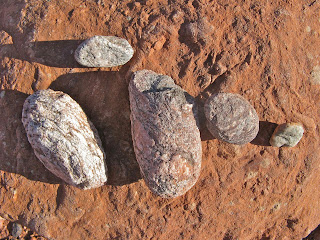 On an evening walk a few weeks ago, some cobbles in a desert wash caught my eye.  They seemed a bit out of place. 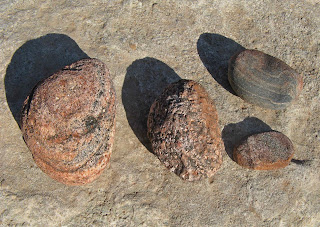 Cobbles are bigger than gravel and sand, 2.5 to 10 inches in diameter, and it takes a fairly energetic stream to move them. 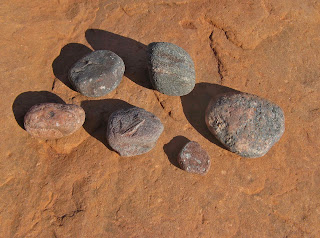 These cobbles have been carried long enough and far enough to be well-worn by bumping and tumbling.  Cobbles like these, composed granite, gneiss, quartzite and schist, survive longer and go further before they are reduced to gravel, then sand, then silt ... 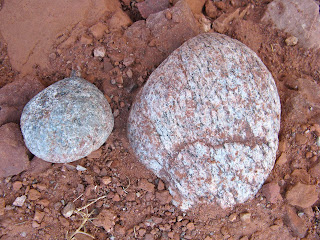 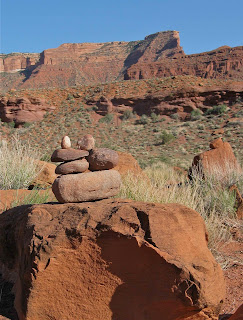 Right:  A portrait of igneous and metamorphic cobbles, posing in a landscape of red, orange and purple sandstones, siltstones and shales.  These clearly are travelers, but from where? 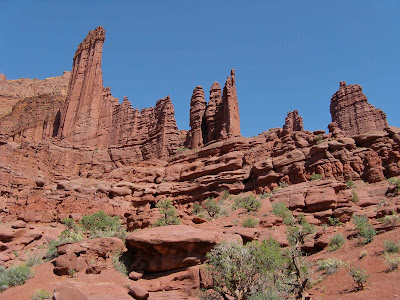 In fact, the cobbles and surrounding sandstones, siltstones and shales all are part of the same rock unit, the Permian Cutler Formation, deposited roughly 300 to 250 Ma (million years ago).  Here in the Fisher Valley north of Moab, Utah, the Cutler consists predominantly of fluvial (stream) deposits -- a mix of silt, sand and cobbles with thin poorly-defined beds at most.  Further west, Cutler deposits have been sorted by particle size into layers sufficiently thick to recognize as separate formations within the “Cutler Group” -- lower Cutler beds, Cedar Mesa Sandstone, Organ Rock Formation and White Rim Sandstone (oldest to youngest). 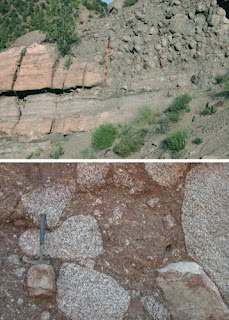 To the east in Colorado, the Cutler Formation is much thicker, with larger and more angular fragments, including boulders as much as 20+ feet in diameter.  This pattern of decreasing fragment size from east to west convinced early geologists that Cutler sediments must have originated in mountains to the east.  Boulders and angular fragments were carried only a short distance west, by mountain streams with high gradients.  Finer particles were transported further, becoming rounded and progressively smaller with all the bumping, tumbling and fracturing en route.

It should be easy to find the source of the Cutler Formation, as these large boulders could have been transported at most only a few miles from the mountain front.  But there are no mountains to the east ... they disappeared long ago.  All that remains of the old range are boulders, cobbles, gravel, sand and silt, and a high-angle reverse fault along which it rose. 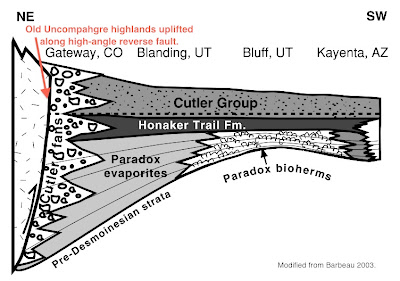 These are the remains of the Uncompahgres, one of the ranges of the Ancestral Rocky Mountains of Paleozoic time.  They were uplifted from about 320 to 280 Ma and simultaneously eroded, shedding fragments of rock to be transported, worn down and finally deposited on the arid slopes and plains to the west.

Erosion of the Uncompahgre mountains continued for some 80 million years after uplift ceased.  During the late Triassic they were nothing more than low hills.  By middle Jurassic time they were gone, their remains underwater and buried in sediments. 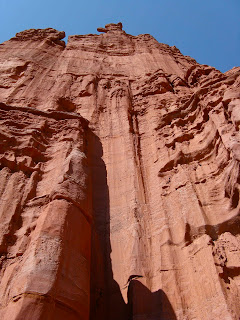 As younger sediments accumulated, Cutler deposits were cemented to make siltstone, sandstone and conglomeritic sandstone.  Sometime during the Tertiary, maybe 60 Ma or maybe only 6 Ma (Fillmore 2003), the Colorado Plateau was uplifted and Cutler deposits again were eroded, this time to form the spectacular scenery of the Fisher Valley.

Left:  Cutler Formation near Fisher Towers, Utah.  In closeup below, note lenses of gravel and cobbles (click to view). 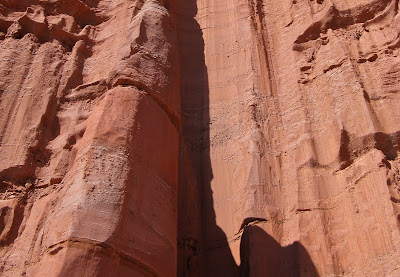 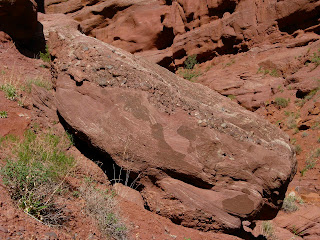 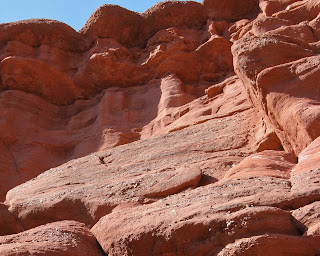 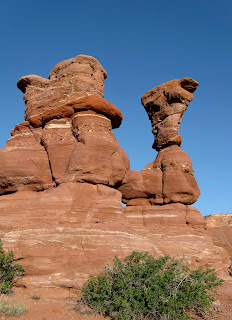 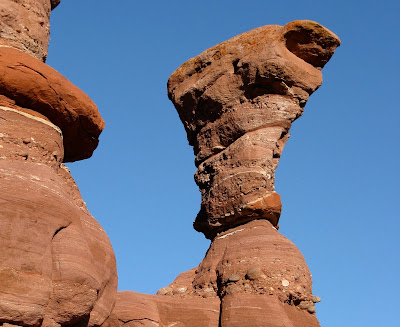 Now, after more than 250 million years of rest, the remains of the old Uncompahgre highlands have been disinterred and are on the move again.  A recent ephemeral stream transported them here; now they lie waiting for the next storm. 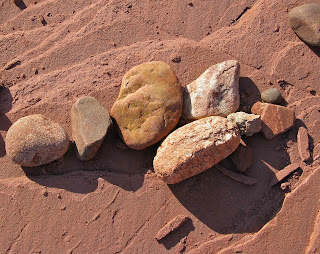 Mountains -
to what shall I compare them?
They are like echos
growing fainter as time passes
and vanishing into the empty sky.

Barbeau, D.L.  2003.  A flexural model for the Paradox Basin: implications for the tectonics of the Ancestral Rocky Mountains.  Basin Research 15: 97-115.