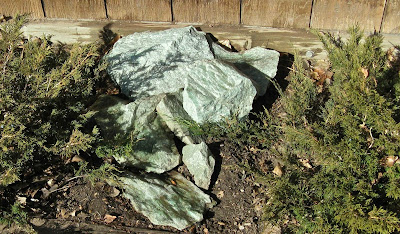 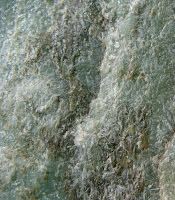 Blackwelder was describing this green quartzite, found west of Big Telephone Lake in the Medicine Bow Mountains.  Quartzite is metamorphosed sandstone, shiny and sparkly from quartz that once was sand.  It commonly is white, but can take on pastel shades with just small amounts of impurities. The green quartzite contains fuchsite, a chromium-rich version of muscovite (mica).  It is an uncommon form of the Medicine Peak quartzite that makes up much of the Snowy Range on the crest of the Medicine Bow Mountains.
The sand that eventually would become the Medicine Peak quartzite was deposited on beaches and in shallow marine environments approximately 2 billion years ago.  It is quite pure, averaging 83-88% quartz, and the grains are rounded, perhaps from being tossed about by waves and currents for so long.  Deposition lasted millions of years, and the resulting formation is massive, to 6000 feet thick.  Adding to the spectacle, the quartzite beds have been tilted to almost vertical during the rough-and-tumble life of the North American continent (more below).
When the sands of the Medicine Peak quartzite were being deposited, this part of Wyoming was beachfront property on the southern coast of North America ... but only for several hundred million years.  Then, from 1.8 to 1.6 billion years ago, North America expanded to the south and west in a series of crustal collisions.  During one of the earliest episodes, land was added to the southern continental margin in what is now Wyoming.  The evidence can be seen just a short distance south of the Medicine Peak quartzite.

The Mullen Creek - Nash Fork shear zone is one of the more intriguing geologic features of the Medicine Bow Mountains.  It represents a significant discontinuity in type and age of exposed rocks.  Those to the north are close to 2 billion years old, while rocks south of the shear zone are much younger, “only” 1.7 billion years old.  Within the shear zone itself, rocks are intensely deformed, suggesting some ancient catastrophe.

The MC-NF shear zone is part of the Cheyenne Belt -- a band of discontinuity and deformation that extends across southern Wyoming.  Between 1.7 and 1.8 billion years ago, either terranes (pieces of continents) or arcs of volcanic islands were pushed up against and joined to ancestral North America along this suture zone.  The sedimentary rocks at the continental margin were metamorphosed and tilted to near vertical, as can be seen in today’s Snowy Range. 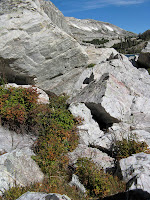 The Medicine Bow Mountains are located a short distance west of Laramie, and are easily accessible via Wyoming Highway 130, the Snowy Range Road, in the warmer months.  The highway crosses the crest of the mountains at the base of the Snowy Range, where there are great views of the Medicine Peak quartzite. 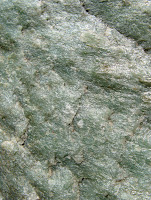 The fuchsite-bearing green quartzite is known from only two locations:  north of South Gap Lake, and at the south base of Browns Mountain west of Telephone Lakes, where there is a small quarry.  There are scattered green boulders southeast of the quarry site as far as the Towner Lake Road.  “Snowy Range green quartzite” was quarried and sold in the Laramie area in the 1960s, mainly for decorative aggregate, occasionally polished and used as decorative stone.  There are no longer roads in this area, and one has to walk about a mile through subalpine scenery to reach the "bright emerald green" bed west of Big Telephone Lake.