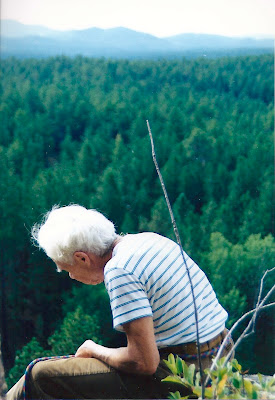 This post is a tribute to pioneer rock climber Herb Conn, who passed away last week at age 91.  Actually, it is a tribute to both Herb and his wife, for I never thought of Herb without also thinking of Jan; it was always “Herb and Jan” or “the Conns”.

Herb and Jan were in their 20s when they gave up their home and work in Washington DC for freedom and the open road.  They outfitted their vehicle for camping, left the Establishment behind and went climbing.  This is a common lifestyle among my friends, and wouldn't seem so unusual except that it was shortly after World War II when the Conns dropped out.  They were pioneer climbing bums -- wandering from crag to crag in their 19-thirty-something panel truck, living simply and cheaply, picking up a little work here and there, and climbing rocks.  They never gave up that lifestyle, even after they "settled down" in western South Dakota.
The nomadic life ended when the Conns arrived in the Black Hills and saw the seemingly-endless granite spires, fins, towers, domes and other fantastical shapes.  “We knew we had found the place we wanted to live” said Jan; they were “two cats in an untended fish market” according to Herb.  The Conns went on to make nearly 220 first ascents in the Black Hills Needles.

In 1959 Herb and Jan were converted to caving, and ended up exploring 60+ miles of passages in what had been considered just a minor cave.  The "Jewel Cave Adventure" is quite a story, but we'll save it for the future.

By the time I got to know the Conns in the mid 1990s, they had given up caving and were back into rock climbing (Herb was 76, Jan a few years younger).  They told me about an interesting fern they sometimes saw in cracks in the granite; they hoped I could tell them what it was.  We headed out for a look and found the maidenhair spleenwort, a very pretty fern indeed! I pointed out the grassy-looking forked spleenwort growing nearby, which Jan called “second-rate” with its scraggly demeanor. 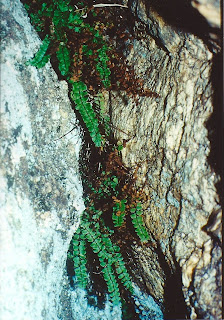 Then the plot thickened.  We found a Mystery Fern which I could not identify, even back in the herbarium.  I sent a specimen to Robbin Moran of the New York Botanical Garden, who identified it as the alternate-leaved spleenwort, at that time known from only three locations in the US, all on the East Coast. 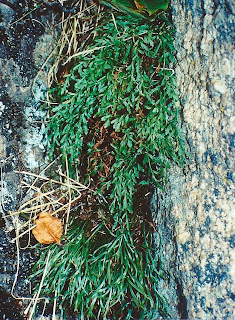 To left, the alternate-leaved spleenwort (the Mystery Fern) growing above the forked spleenwort.  Photo by Larry Ebbert.

The Conns and I published our findings in the American Fern Journal, but the story is best told in Jan’s illustrated account (below).

One of Jan’s many talents is rubber stamp art.  Here is a story about the Conns' fern adventures.  Stamps designed by Jean Dolan, made by Jan; script by Hollis.  Jan explained that Jean had been a climbing friend in the 1940s.  Before making the designs, "she got in touch with present day climbers to get the gear correct."

The Conns and climbing:
Stephens, Lindsay.  2008.  South Dakota Needles: Adventure Climbs of Herb and Jan Conn.  Boulder, CO: Sharp End Publishing.  Among the highlights of this book are entertaining excerpts from the Conns' journals. Infinitely-many thanks to Lindsay for collecting and sharing the wonderful Conn stories, as well as documenting the Conn routes in the Needles.  If these routes seem terrifying now, imagine climbing them in smooth-soled sneakers with only pitons for pro!

UPDATE:  Daryl S. of Sylvan Rocks Climbing School and Guide Service has put up a nice post about his friends the Conns.