Plate tectonics “textbooks” (traditional and online) commonly use the collision of India and Asia to illustrate continental-continental convergence -- understandably, as this is a dramatic example of the geological processes and resulting landscapes.  The Himalayas, pushed up for at least 40 million years by ongoing continental convergence, extend for 2900 km(1800 mi) along the collision zone and rise abruptly from the plains of the Indian subcontinent to spectacular heights.  Though more subtle, I found views from the valley of the Indus River in Ladakh even more awe-inspiring as I stood on the continental suture looking east toward Asia and west toward India.

The Indus-Tsangpo Suture joining India and Asia is named for the major rivers that flow along it.  The Indus River follows the suture northwest through Ladakh and on to the vicinity of Nanga Parbat (NP in diagram below).  It then leaves the suture zone to flow south through Pakistan to the Arabian Sea.  The Tsangpo River in China follows the suture east but then heads south, becoming the Brahmaputra River in India and Bangladesh. 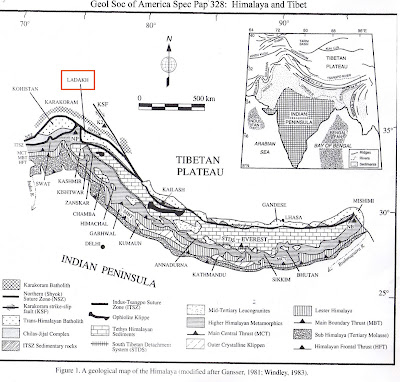 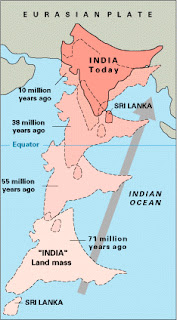 There was a time when the Indian subcontinent was a large island near Australia, separated from Eurasia by the Tethys Sea.  When Pangea began to break up about 200 million years ago, India headed north covering perhaps as much as 9 cm per year.  Estimates vary, but in any case this was fast continental drift (see recent post re proper use of term), probably faster than any plate movement currently.

About 80 million years ago India was still 6400 km (4000 mi) south of Asia but continuing to speed north.  The intervening Tethys Sea finally disappeared as India and Asia collided; Tethys sediments were plastered onto the margin of the Asian plate as the leading edge of India was subducted under it.  These sediments now stand several miles above sea level in the Himalayas (Tethys Himalayan Sediments in diagram above).  With continental collision, India slowed down to the more sedate rate of about 18 mm per year.  Illustrations left and below courtesy USGS.

As India presses against Asia, the Himalayas continue to rise more than one centimeter (0.4 inch) per year.  This is obvious in Ladakh where the roads are either falling off the steep active slopes or about to. 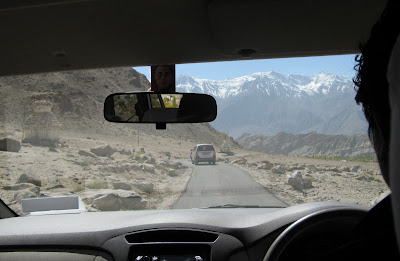 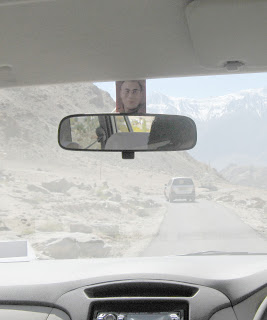 Travel was terrifying at times and I was glad our driver kept a photo of H H the Dalai Lama above the rearview mirror.
The landscapes in the suture zone are striking.  Within the enormous rain shadow of the Himalayas, the slopes are very dry and support little or no vegetation. 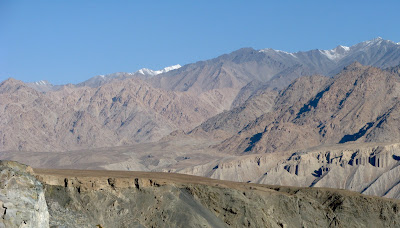 In broader parts of the Indus River valley one finds in the bottom a narrow green zone of crops, trees and even marshes, supported by irrigation off the Indus. 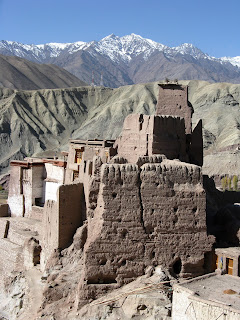 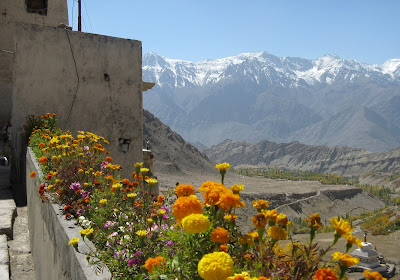 The monasteries with their simple blocky bold exteriors seemed very much a part of the harsh rugged mountain landscapes. 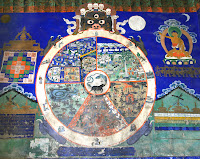 Inside however, the environment was very different -- another world that was easy to find mystical.  Once my eyes were accustomed to the dimmer light, I saw walls and ceilings covered with elaborate colorful paintings surrounding a glowing sculpture of the Buddha or Padmasambhava.  Always there was the sound of chanting and the smell of incense. 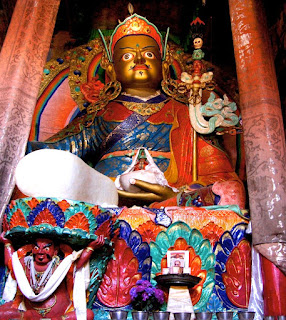 Ladakh is on the western edge of the Tibetan Plateau.  Ladakhis are Tibetan in culture and speak a Tibetan dialect.  Ladakh became part of India in 1846 when it was incorporated into the state of Jammu and Kashmir, but it maintained considerable autonomy as well as close relations with Tibet -- until access to Tibet was cutoff by China.  Even so, Tibetan Buddhism continues to thrive in Ladakh.