Many times I have driven home at sunset after wandering in the Laramie Mountains east of town.  At dusk the creatures of stone that reside on the broad summit stand silhouetted against the evening sky, a remarkable view of giants forever waiting by their castles, somehow life-like but never moving.  If during the light of day you go to look more closely, these creatures disappear no matter how carefully you sneak up on them.  In their place you will find piles of boulders, or perhaps carefully-stacked stones. 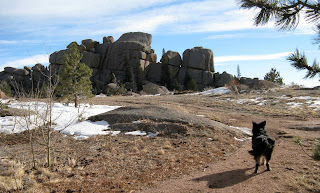 These are tors -- masses of granite standing above the surrounding landscape.  About a month ago I provided an introductory tour of tors.  Now we consider how they may have come to be. 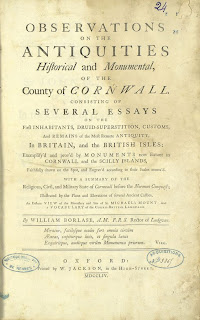 In perhaps the earliest study of tors, Borlase (1754) concluded that the Cornwall tors of southwest England were man-made monuments similar to Stonehenge.  Other investigators arrived the same conclusions elsewhere in England.  The fact that many of these outcrops were composed of roughly cube-shaped stones lent credence to the theory, for it was assumed that the makers of Stonehenge were Druids and that Druids worshiped Mercury, symbolized by the cube.  [In reality, almost nothing is known about Druid culture:  “They left no written accounts about themselves and the only evidence is a few descriptions left by Greek and Roman authors, and stories created by later medieval Irish writers.”]  Borlese's treatise can be viewed in its entirety here.

By the early 1800s cultural explanations were being replaced with geological theories.  One of the first proposed that tors were relics of ancient coastlines, based on their similarity to sea stacks.  In the late 1800s reports of tors from arid environments led to the idea that tors were sculpted by wind, a theory that had strong support as late as the 1940s.

In 1955 David Linton published an influential paper arguing that tors develop in two stages: subsurface weathering first creates the shapes, erosion later exposes them.  The idea had been proposed more than fifty years prior but was ignored; in contrast, Linton’s publication attracted wide interest.  Now there is general agreement that much or even most of the work on a tor sculpture is done underground, where it remains hidden until exposed by erosion, perhaps millions of years later.

Fracturing is the first step in sculpting a tor.  While granite is indeed a very hard rock, fractures and fissures in bedrock are common, especially near the land surface.  Fractures can be dense or widely-spaced.  Typically there is a system of orthogonal (at right angles) fractures -- clearly seen in blocky tors -- as well as other seemingly-random fractures, resulting in a complex set of cracks (Twidale and Vidal Romaní 2005).  These are the gateways leading to weathering.  Ground water percolates through soil, collects in cracks and proceeds to attack the bedrock through chemical weathering.

With enough time a mantle of rotted granite -- the regolith -- develops over the bedrock and below the surface soil.  The boundary between regolith and fresh rock is the weathering front.  In areas underlain by granite, the weathering front typically is a sharp boundary or narrow transition zone.  The regolith above the weathering front can be quite thick -- as much as several hundred meters in warm humid environments.  In addition to playing a role in soil development, the regolith holds water and contributes to weathering of the underlying granite (Twidale and Vidal Romaní 2005).
Rotted granite or “grus” also fills fractures in bedrock.  With enough weathering, the result is solid boulders set in a matrix of rotted granite -- corestones in grus.  “Corestone” originated with quarrymen in England, referring to the intact boulders surrounded by decomposed granite that they found in quarries. 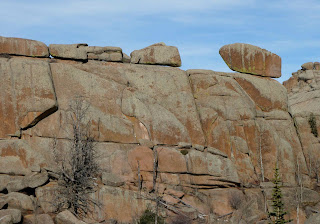 But not all bedrock is eroded into corestones.  Degree of weathering varies with depth, with deeper rock experiencing less (shown in diagram above). This can be seen in the tor on the right, which is less fractured and weathered below, and topped by boulders (note fallen ones at base).

Weathering is only half the process of tor creation.  In the second stage erosion exposes tors and boulders.  Again water is the likely agent -- generally running water but occasionally other things such as wave action.  The regolith and grus in fractures are washed away relatively quickly, whereas the fresh rock of corestones and tors is much more resistant to weathering, especially once it is free of moisture-laden cover.

Scenarios leading to erosion vary from location to location.  Often uplift resulting in rejuvenated streams and increased erosion is the suspected cause. (Part 3 in this series will discuss possible reasons for accelerated erosion.)  Removal of regolith is quite rapid geologically-speaking.  “In the Cairngorms [Scotland], tors can emerge at rates of ca 30 mm/ka” [0.12 in per century] (Phillips et al. 2006).
Fracturing and weathering of granite bedrock starts long before tors ever see the light of day.  Linton (1955) suggested that in the case of the Dartmoor tors in southwest England, much of the underground weathering took place in warmer wetter times.  Certainly more humid environments have greater rates of bedrock weathering.  Linton argued that the latest possible date of profound weathering was the last interglacial, and suggested that it may have been much earlier -- perhaps during Pliocene times (5-2.5 my bp) when England was a warm and humid place.  More recently, other workers also have interpreted tors as indicators of warmer past climates when subsurface weathering was more agressive (see climatic zonality in Twidale and Vidal Romaní 2005, pp 309-313).
The two-stage process explains how tors form, but the story is not complete, there is another question:  Why are there only isolated clusters of tors?  Why are tors not found all across landscapes underlain by granite?  But sorry -- this post has gone on long enough.  You will have to wait for Part 3 -- the story of the Crow Tors of the Laramie Mountains in southeast Wyoming.

NOTE:  “Tor” is not used by all geomorphologists.  For example, Twidale and Vidal Romaní (2005) classify granite landforms with no mention of “tor”.  Their classification includes several tor-like forms:  bornhardts are massive domal structures; castle koppies are more dissected, fractured masses; nubbins are mounds covered with boulders; and boulders are ... boulders, sometimes very large.

Borlase, W.  1754.  Observations on the antiquities historical and monumental of the County of Cornwall consisting of several essays on the inhabitants, druid superstition, customs, and remains of the most remote antiquity in Britain and the british isles : exemplify'd and prov'd by monuments now exstant in Cornwall and the Scilly islands...  Available at http://bibnum.univ-rennes2.fr/items/show/35?image=6&v=#bibnum