down where it’s shady and cool 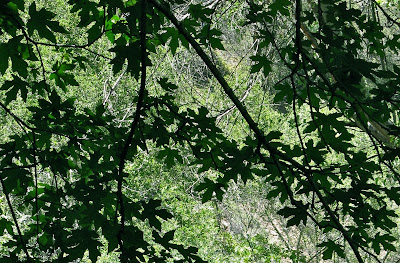 Much of California has a Mediterranean climate, with winter rains and summer sunshine.  In the mountain ranges of the Central Coast, the rainy season usually starts in November and ends in May, followed by an unspoiled sunny summer -- "Heaven right here on Earth" some would say.  "Mediterranean" may sound idyllic, but if you happen to be a plant, it's a challenging environment.  Summer brings long days of sun, heat and drought.  Most grasses have given up by June, and hills turn golden brown.
In spite of the long drought, much of the vegetation of the Coast Ranges remains “green” year round.  However this is not a rich lush green, but rather the dull dark and subdued gray greens of chaparral.  Chaparral shrubs can survive months without rainfall, and much about them represents efforts to minimize water loss.  Their leaves are sclerophyllous (Gr., "hard leaf"), with a thick epidermis covered by a waxy cuticle, hence the dull greens.  Leaves tend to be small, and grow close together on the stems.

These adaptations reduce evaporation, but at a cost.  Small closely-packed thick dull leaves absorb less sunlight, photosynthesize less, make less sugar.  The plant grows more slowly, though this is not a bad price to pay for survival. 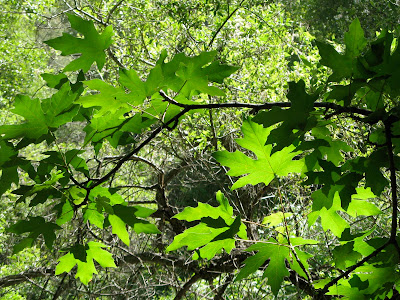 While the chaparral-covered slopes bake in the summer heat, down in narrow canyon bottoms where it’s shady and cool, plants are photosynthesizing like crazy, making hay while the sun shines.  But this environment poses challenges too.  Though shade provides protection from evaporation, it also deprives plants of sunshine needed for photosynthesis. 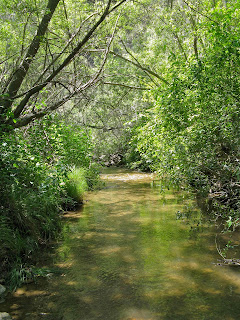 Trees have the advantage of being tall, lifting their leaves to the sun.  They can do this in the hot dry Coast Ranges by growing in a riparian zone with a perennial stream close by.  A reliable water source eliminates the need for drought adaptation.  Growth can be more rapid, allowing production of a trunk and the extensive vascular tissue needed to transport water and nutrients from one end of the plant to the other. 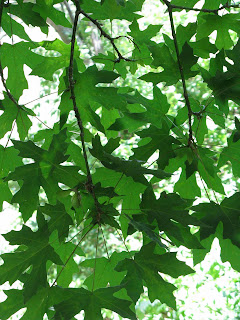 Leaves of riparian trees are quite different from those of chaparral plants.  Often they are large, thin and a rich green -- more susceptible to water loss but better able to absorb sunlight.  They are arranged to maximize solar gain, making lovely patterns against the sky.  To the left is bigleaf maple, Acer macrophyllum, growing along a stream in the southern Santa Lucia Range of the Central California Coast.  Its leaves are indeed big -- up to 12 inches long, the largest of any maple.  Typically there are five lobes, occasionally three.  The long stalks add to the beauty of the leaf arrangements. 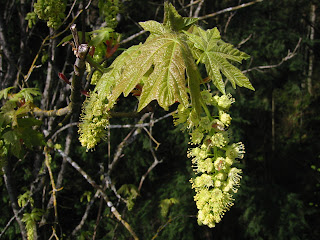 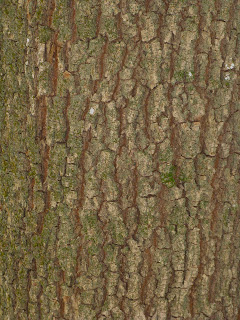 The largest bigleaf maples grow in southern Oregon, with some reaching 100 feet in height.  More often they are 50-80 feet at maturity.  Bark of mature trees is brown and “furrowed into small four-sided plates” (Little 1980).

Right: north side of a bigleaf maple trunk, with a bit of moss. 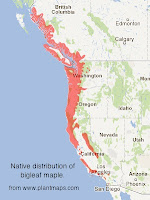 Bigleaf maple is native to western North America, growing from southern Alaska south through California.  Where precipitation is greater, it can be found outside of riparian zones, including moist slopes and even dry sites in the wetter northern part of its range.  It is widely planted as an ornamental.


In late fall, usually by November, the first rains of the season arrive in the Coast Ranges.  Up on the slopes, the thick tough leaves of chaparral plants step up photosynthesis, though still limited to slow rates that come with drought adaptation.  In the canyon bottoms, even shadier now that the sun is low, bigleaf maples have given up photosynthesis for the winter.  A month or so earlier, shorter days or maybe longer nights or possibly cooler temperatures triggered the breakdown of green chlorophyll, giving red, orange and yellow pigments their moment in the sun.  Or perhaps it was really those Leaf Fairies that come each fall and cover the big maple leaves with bright orange and yellow paint ... we can’t be sure!  But Fairy paint never lasts, the leaves fall and turn brown, and the maples stay leafless 'til spring.