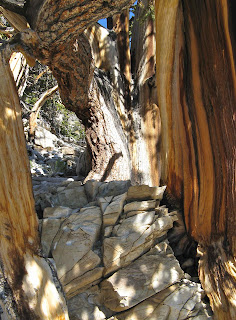 Several days ago I posted a short quiz featuring a mystery plant and a mystery rock.   Congratulations to Lockwood for highest score.  He named the bristlecone pine as well as the subsection of pines, the Balfourianae.  This is a really interesting group that I learned of just recently -- very cool, so extra credit Lockwood!  He also got the location (White Mountains of California).  Second place goes to Ronn, who identified the Great Basin bristlecone (Pinus longaeva) growing on dolomite, but had the unfair advantage of knowing the location and purpose of my expedition :)

The Great Basin bristlecone pine, Pinus longaeva, is one of three species in subsection Balfourianae, the Foxtail Pines.  The others are the Rocky Mountain bristlecone pine, P. aristata, and the foxtail pine, P. balfouriana.  All three grow at high elevations in harsh conditions, and are extremely long-lived.  The Great Basin bristlecones are the most ancient -- "Methuselah" is thought to be the eldest, at least 4600 years of age.  Many of the stunted bristlecones in the photo below are 3000-4000 years old. 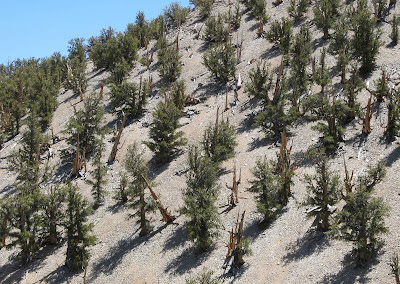 In spite of the habitat similarities of the three species, their ranges do not overlap.  Maps below are modified from Tree Species Range Maps (USGS); accessed May 2012.  This website includes both P. longaeva and P. aristata in the distribution map for the latter (corrected below).  At one time they were considered a single species, but Bailey (1970) provided convincing evidence for recognition of two species.  Current distribution information is from Lanner 2007. 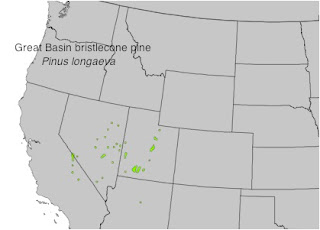 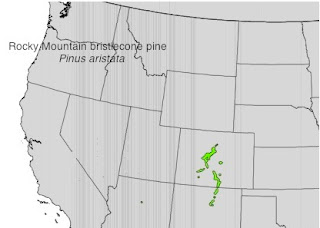 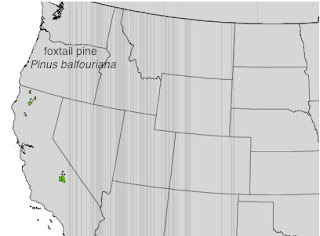 The two disjunct clusters of foxtail pine shown above are recognized as separate subspecies:  ssp. balfouriana in the Klamath Mountains (including a population in extreme southern Oregon not shown), and ssp. austrina in the Sierra Nevada to the south. 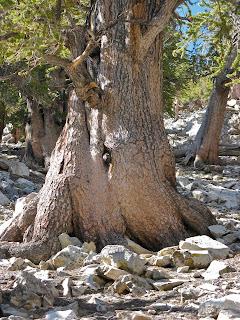 In the White Mountains of eastern California and western Nevada, bristlecone pines grow on thin, nutrient-poor soils that develop from the Reed dolomite. 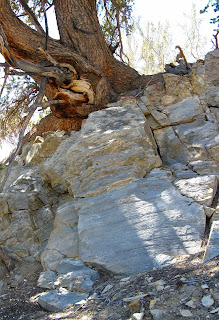 The Reed is massive, white to buff, fine- to coarse-grained dolomite (dolostone) that “weathers to form white, angular to spheroidal, resistant outcrops riven by joints of various attitudes” (Ernst et al. 2003).  It often is assigned to the Precambrian-Cambrian transition ca 600 to 520 million years ago.  Corsetti and Hagadorn (2003) consider it to be late Precambrian based on more precise dating of the PC-C boundary. 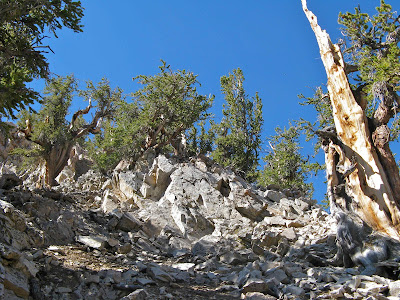 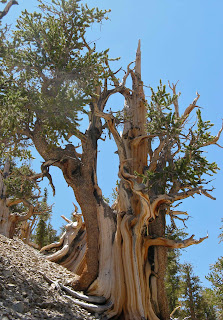 Why is it that such ancient trees are found in such extreme environments?  Even more impressive, the oldest bristlecones grow on the harshest sites!  This intriguing situation has puzzled people since the antiquity of the trees was first discovered, and has been the stimulus for a lot of research.  We now know quite a bit about bristlecone pines, though not enough to explain away all the mystery.  You can read more of their strange story at but there s life in the old dame yet.