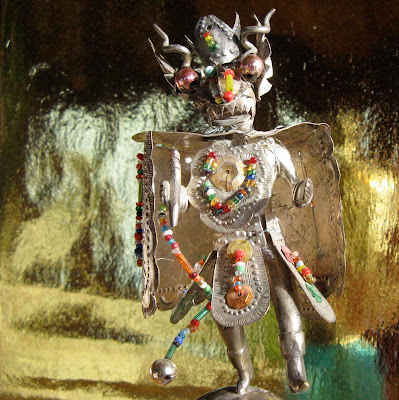 Underground mining is an extremely dangerous way to make a living.  Thousands are killed each year, mainly in coal and hard rock mining.  There are far more casualties in developing countries.  China leads in coal mining fatalities, with 80% of the world’s deaths (while producing 35% of the world’s coal).  An estimated 13 Chinese workers die in coal-mining accidents each day.  In the US, 60 to 70 US miners die each year in all types of mining (from About.com Mining, Common Mining Accidents  accessed Dec 2011). 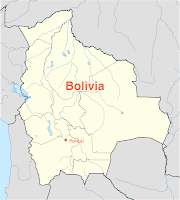 It is estimated there have been 8 million deaths in the 500-year history of underground mining in Bolivia, mainly for silver and tin.  Silver mining began with settlement by Spaniards in Potosí in 1546.  In 1603 it was reported that 58,800 Indians were employed in the mines.  Later 30,000 African slaves were brought in to work as well.  In the late 1600s the population of Potosí was 200,000 -- one of the largest cities in the world at the time.  By 1800 the silver mines had been depleted and investment and production shifted to tin.  Then in 1985 the global tin market crashed.
Though mining no longer dominates the Bolivian economy, silver is still produced in the Potosí area, often by scavenging in old worked areas.  The workforce was estimated at 9000 in 2004, including many children.  It is an extremely dangerous occupation -- safety equipment is primitive at best, and dust inhalation is a major problem.  The estimated life-span of a Bolivian silver miner is 40 years -- most die from silicosis.  The human cost of silver mining in Bolivia was addressed in two recent documentaries:  The Devil’s Miner by Independent Lens (2006) and Bolivia's Child Miners by Unreported World (2010).

In the face of such obvious danger Bolivian miners seek spiritual protection from two sources:  Nuestra Virgen del Socavón (the Virgin of the Tunnel) above ground, and el Tío (the Uncle) below ground.  La Virgen appears to be descended from the Uru Mother Earth spirit, Pachamama, with a significant contribution from the Virgin Mary.

El Tío also is mix of indigenous beliefs and Catholicism.  He is the pre-Columbian god of the mountains and underground, but has taken on characteristics of the Christian devil, mainly in appearance. 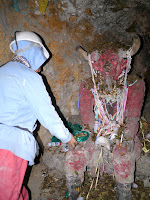 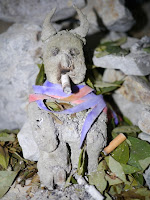 In mines there are numerous statues of el Tío and alters for offerings -- cigarettes, coca leaves, soda pop and alcohol.  And now tourists are offered mine tours and visits with el Tío.  These are becoming fairly popular judging by the number of posts in travel blogs.  Photos to left and right courtesy Soulshine Traveler. 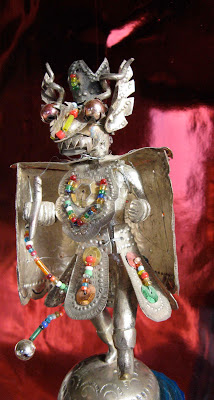 El Tío has been popularized also in la Diablada, the Devils Dance, which is thought to have originated in pre-Columbian times to appease El Tío, then known as Wari or Huari.  La Diablada has become extremely popular in Bolivia -- best known are the Carnaval performances in Oruru.  Recent claims to la Diablada by Peru have set off a diplomatic storm, and other Andean countries now claim it as well.