It’s the end of Week 2 of the writing frenzy started by Highly Allochthonous and I’m still in it, with the goal of completing two draft publications on high elevation grasslands in the Black Hills by December 4.  I like to create a post from the previous week’s work.  This makes the whole endeavor more fun, and forces me to think more clearly about the project.  So here it is ... 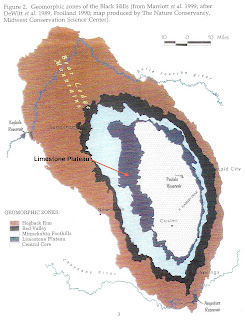 In a previous post I gave an overview of the status of high-elevation grasslands in the Black Hills.  Large grasslands are common in broad drainage bottoms on the high Limestone Plateau in the western part of the range (red arrow in illustration to left), but most are dominated by non-native species.  Small native patches are sometimes found on drier lower slopes.  The few remaining large native grasslands are restricted to approximately 40 square miles in the drier southern part of the Limestone Plateau. 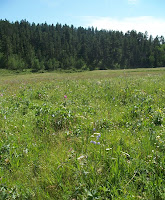 The Black Hills montane grasslands include a diverse group of forbs (wildflowers), and local residents rave about the wildflower shows "out on the Limestone".  The photo to the left shows the montane grassland near White Springs, a Rocky Mountain Region wildflower viewing area.  (courtesy US Forest Service).

But what kind of grassland is native to the more mesic (wetter) sites in the northern part of the Limestone Plateau?  These grasslands now are dominated by the hay grasses Phleum pratense (timothy) and Bromus inermis (smooth brome), often mixed with the non-native clovers Trifolium pratense (red clover) and T. repens (white clover).  Can we somehow guess at pre-settlement composition?

I began seeking native high-elevation grasslands in the Black Hills in 1998, when the consensus was that there were none left.  When I discovered small patches adjacent to hay meadows I was thrilled.  In 1999 I found several large native grasslands in the southern part of the Limestone Plateau, raising expectations that mountain meadows in the Black Hills were alive and well.  But a comprehensive survey in 2011 documented native grassland only on more xeric (drier) sites, with mesic habitat consistently occupied by hay grasses.  Native species occasionally are mixed in, but not enough to even begin to speculate about pre-settlement composition.  So might we find enlightenment by looking to the past?

In the 1920s Arthur C. McIntosh of the South Dakota School of Mines and Technology in Rapid City made extensive studies of the flora and vegetation of the Black Hills.  In his 1930 publication, Botanical Features of the Northern Black Hills, McIntosh provided species lists for the mountain meadows of the Limestone Plateau and reported that:

“Timothy is commonly the most abundant grass in the lower meadows, but on well-drained slopes the spear-grasses [today's needlegrass and porcupine grass] and drop-seed are most conspicuous.”

So the situation in the 1920s was no different than it is today.  On a more positive note -- like today's residents, McIntosh was impressed by the flower-filled meadows of the Limestone Plateau, which he described as a “riot of color” in June and July when the grasses were “temporarily obscured by an avalanche of showy-flowered species.”

Going back further still ... In 1892 P. A. Rydberg botanized in the Black Hills for the US Dept. of Agriculture.  He spent three months there, traveling in July to the Limestone Plateau, where he too noted the richness of the mountain meadows:

“The region resembles much some parts of Sweden [his homeland]. The pine-covered hills were here, so also the meadows with the knee-deep grass, and the flowers were in greater profusion and greater variety of color than I have seen elsewhere in America. The Swedish species were seldom present, but they had their counterparts ...”

Rydberg went on to list wildflowers and shrubs he had found in the Limestone District but made no mention of any of the “knee-deep grass” species.  He did note that the “valleys between these ridges are composed of excellent hay land”.

We can go back further still, to Lt. Col. George Armstrong Custer’s expedition to the Black Hills in 1874.  H.B. Donaldson collected 75 plant species but provided no details on the “luxurious grasses” they found in the mountain meadows.  The flowers were a different matter.  Even the weary soldiers marveled at the displays that surrounded them when they entered the Black Hills from the dry plains to the west.  In Custer’s words:

“Every step of our march that day was amid flowers of the most exquisite colors and perfume ... it was a strange sight to glance back at the advancing columns of cavalry, and behold the men with beautiful bouquets in their hands, while the head-gear of the horses was decorated with wreaths of flowers fit to crown a queen of May.  Deeming it a most fitting appellation, I named this Floral Valley.”