Clastic Detritus and Galileo’s Pendulum have proclaimed and publicized this week as Sand Dune Week, after discovering multiple posts on the topic including singing sands and sand tsunamis.  Then looking for Detachment joined in with a virtual tour of Sand Mountain in Nevada.  Now there are more:  Earth Photo of the Day features dunes of Death Valley.  There is a post about kriiva in Estonia, puzzling landforms made of sand which may or may not be dunes.  I too am immersed in sand this week ... I'm reading Sand by Michael Welland of Through the Sandglass.  This calls for a virtual field trip to some dunes -- specifically the dunes of Oso Flaco on the Central Coast of California.

"The Oso Flaco" lies at the west end of the Santa Maria Valley.  It was named in 1769 by a group of hungry Spanish explorers for the skinny bear they killed and consumed there.  The Oso Flaco dunes are part of the Guadalupe - Nipomo Dunes Complex, 18 miles in length, in southern San Luis Obispo and northern Santa Barbara counties.  Mussel Rock Dune at the southern end of the complex is the highest on the west coast of the US at 500 feet.

Sand dune landscapes are stark and unusual, and often oddly beautiful.  It is not surprising that there was an alternative community of mystics, writers and artists living in these dunes in the 1930s and 1940s -- the Dunites, who found the setting to be a source of creative energy. 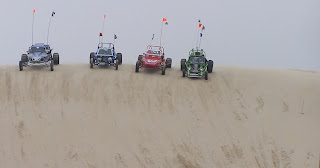 By the 1960s, the dunes had become quite popular with dune buggy-ers, and when the environmental movement then arrived on the Central Coast, a battle began.

Off-road vehicles still crawl the northern part  -- the Oceano Dunes State Vehicular Recreation Area.  But the dune buggies were kicked out of the southern part, astounding considering the local culture.  Today this area is managed for conservation as state and county parks, and a wildlife refuge. 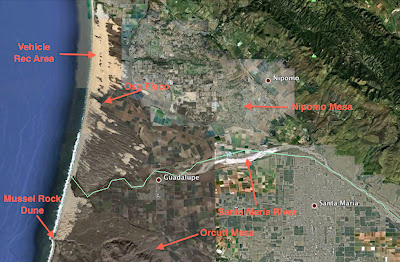 The Guadalupe - Nipomo Dunes Complex contains a wonderful diversity of ecosystems, including terrestrial, fluvial, lacustrine and marine.  There are three major zones:  active, partially-vegetated and stabilized dunes.  The oldest dunes underlie the Nipomo and Orcutt Mesas on either side of the broad valley of the Santa Maria River.

I will be posting a lot more about the dunes at Oso Flaco in May, when I’m there on vacation (whoo-eee!!).