Lately it seems I’ve been mostly looking up at plants.  Being a tree-follower, I've been monitoring my cottonwood and its flooded home.  But it’s springtime in the mountains, the wildflowers are blooming like crazy, and it’s time to commune with the smaller plant folk.  I especially like to get down at their level and meet them face-to-face.


With a macro lens on my camera, I drove up into the Laramie Mountains, to the Blair trailhead.  Heartleaf arnica was in full bloom, growing abundantly in shady spots.

Arnica is a composite (i.e. sunflower family) and some might call it a DYC -- a damn yellow composite.  But it's easy to recognize with its distinctive leaves.  The lowest ones are the most heart-shaped. 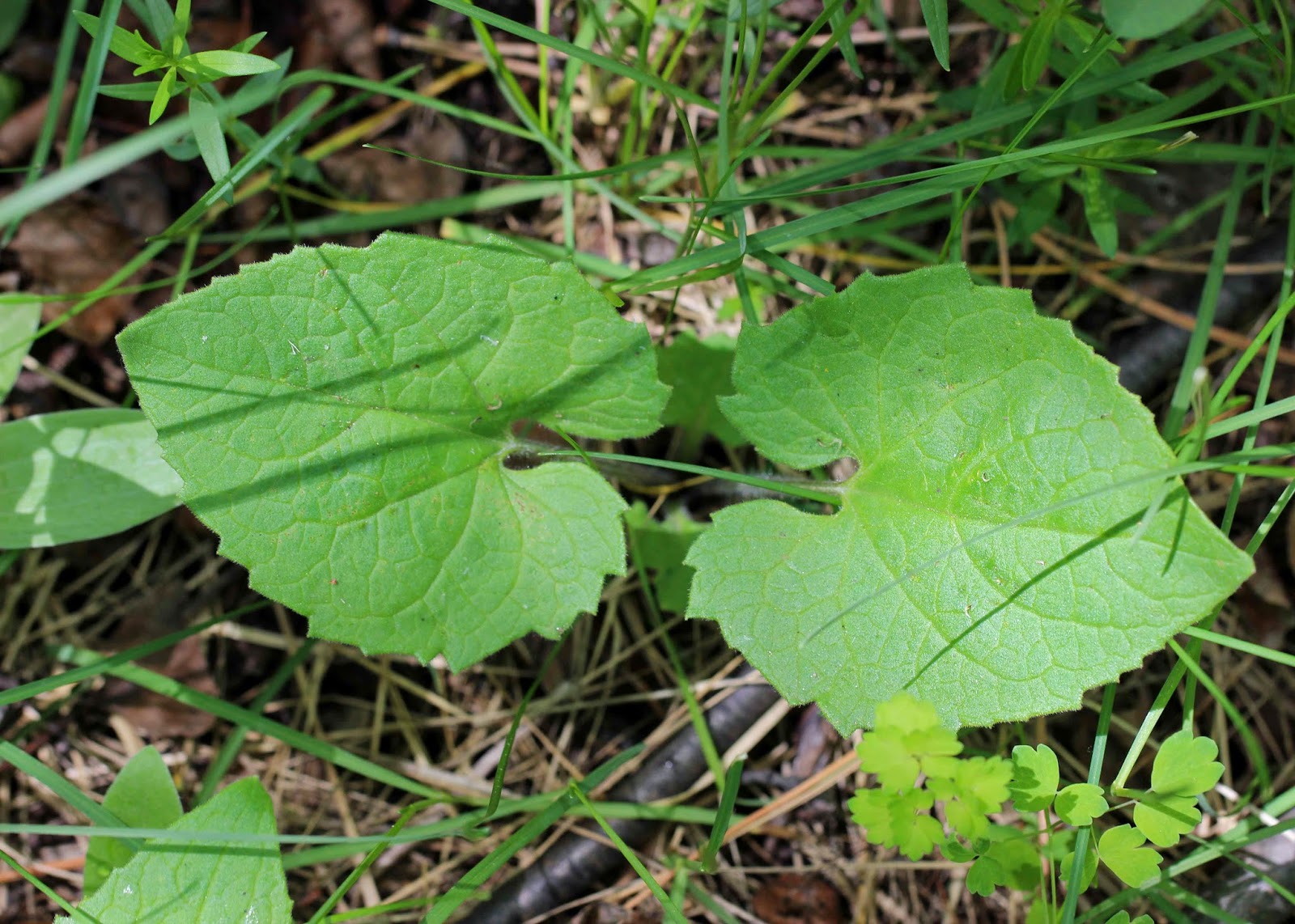 Dandelions were growing here and there along the trail.  They bloom early and late in the season, and every time in-between ... in the mountains, on the prairie, and in town. 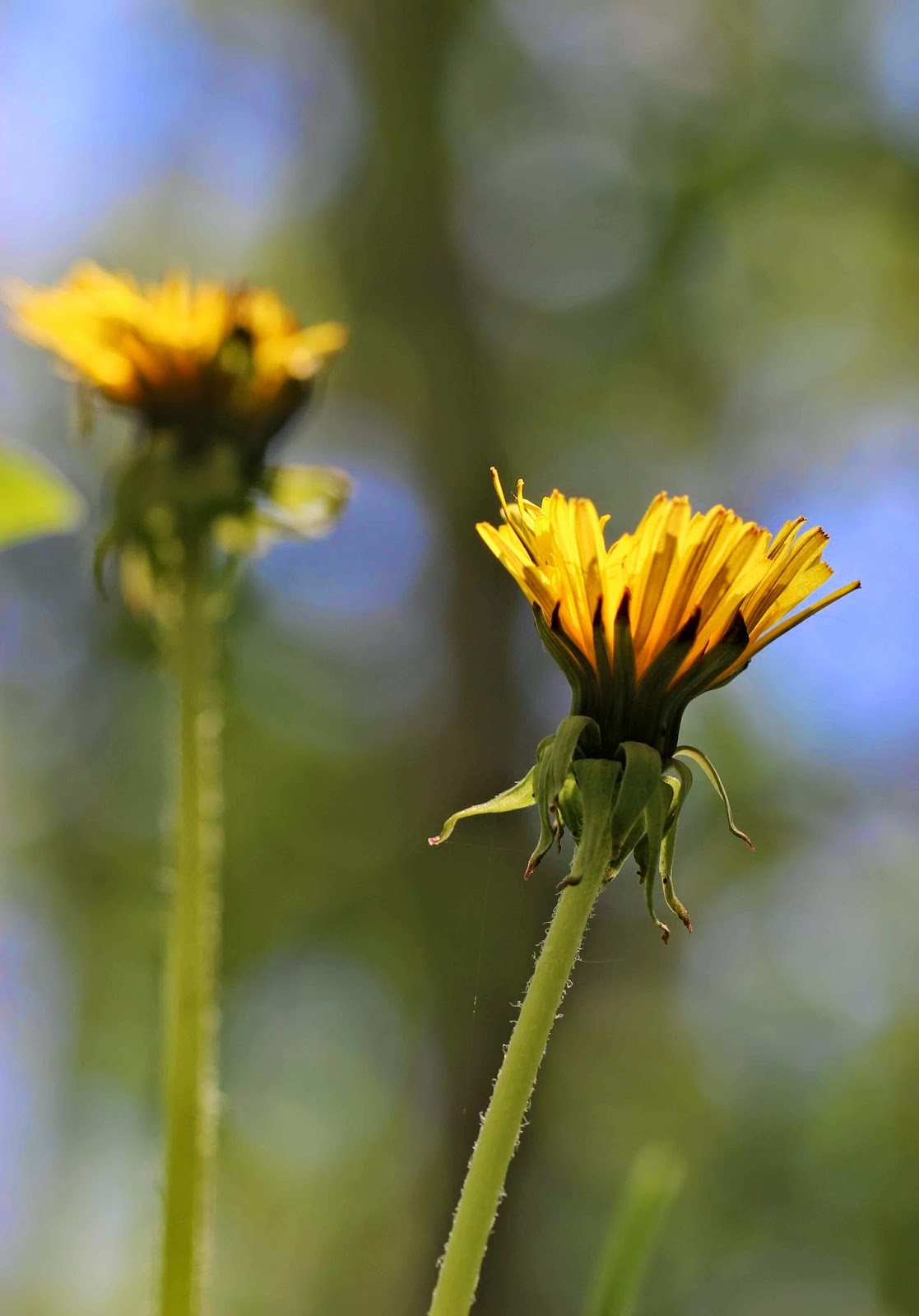 On the edge of a stand of sagebrush, in full sun, I met a yellow violet -- an oxymoron I suppose, but I'm used to its funny name.  I never think twice about it until someone looks at me odd. 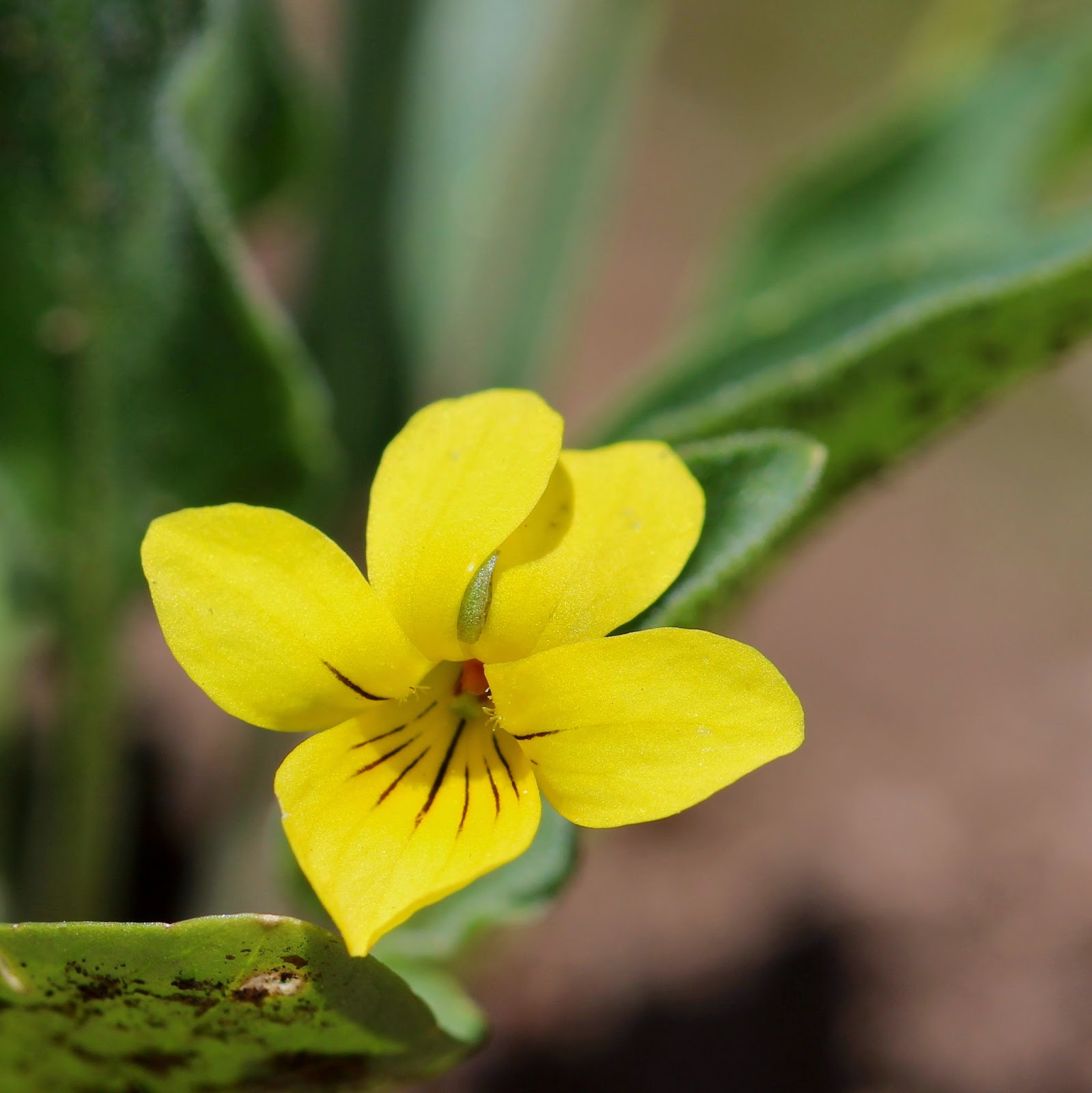 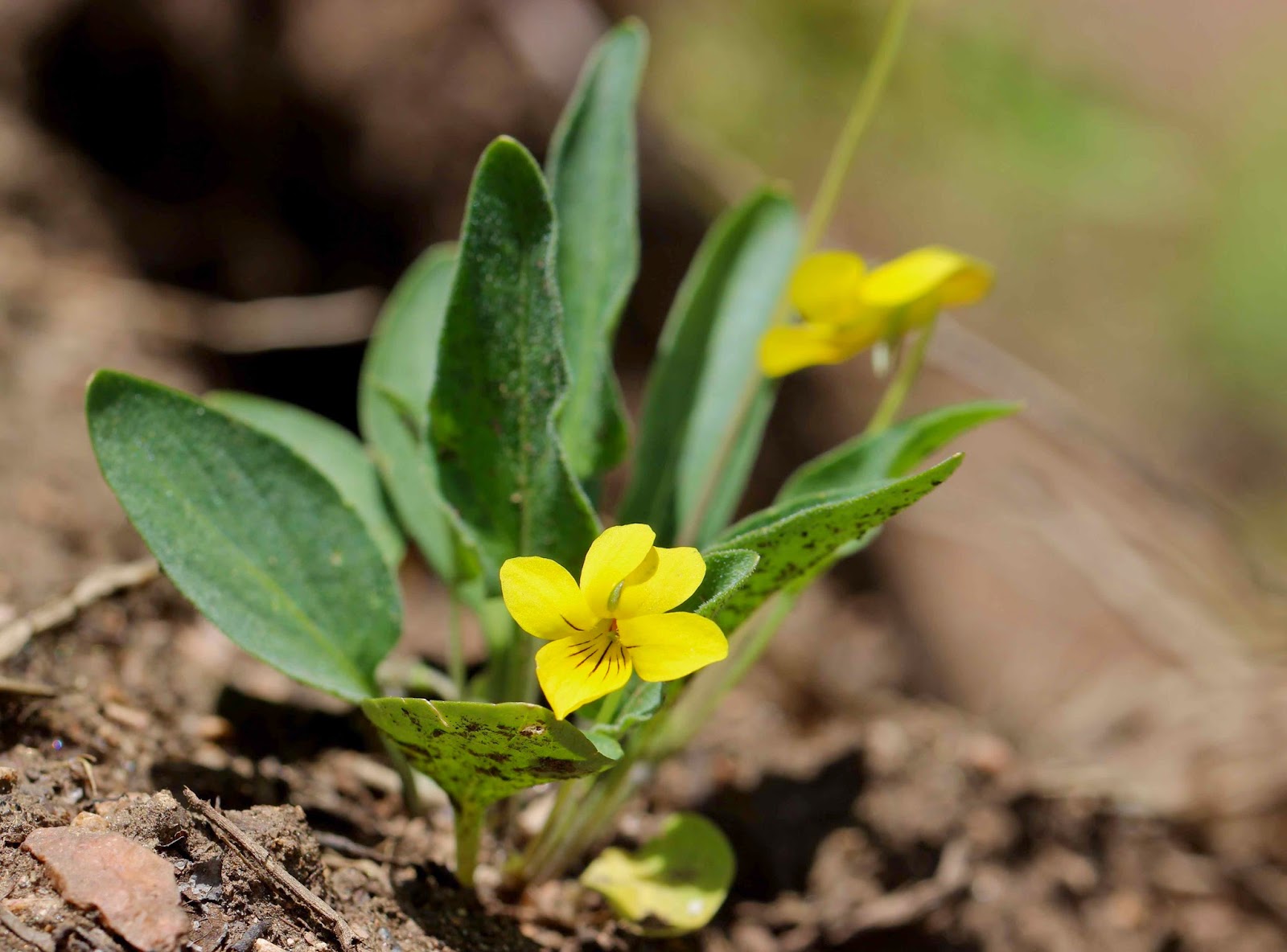 This particular yellow violet is probably Viola vallicola, as it’s growing above 8000 feet, but it's difficult to distinguish from V. nuttallii of lower elevations.  Issues and id tips are discussed here.

Near some small granite outcrops were low mats of leathery leaves and pink urn-shaped flowers -- one of my favorite plants!  (yeah, ok, I have lots)  I love both the delicate little flowers and the name: kinnikinnik (kin-nee-ki-NICK). 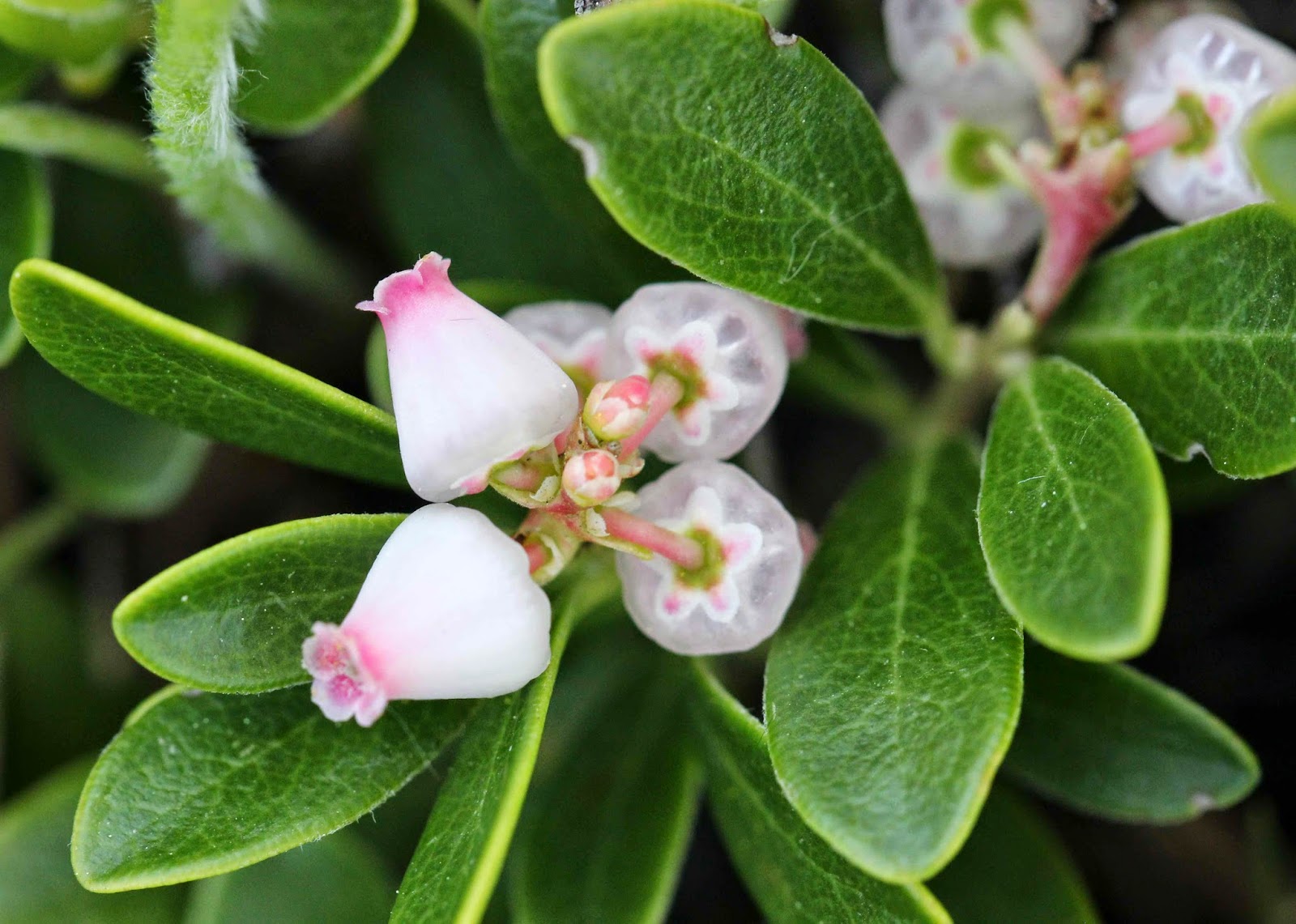 The macro lens sometimes reveals things I don’t notice on my own, in this case translucent spots on the bottoms of the urns.  Do they serve a purpose? or is this just the way the flowers grow? 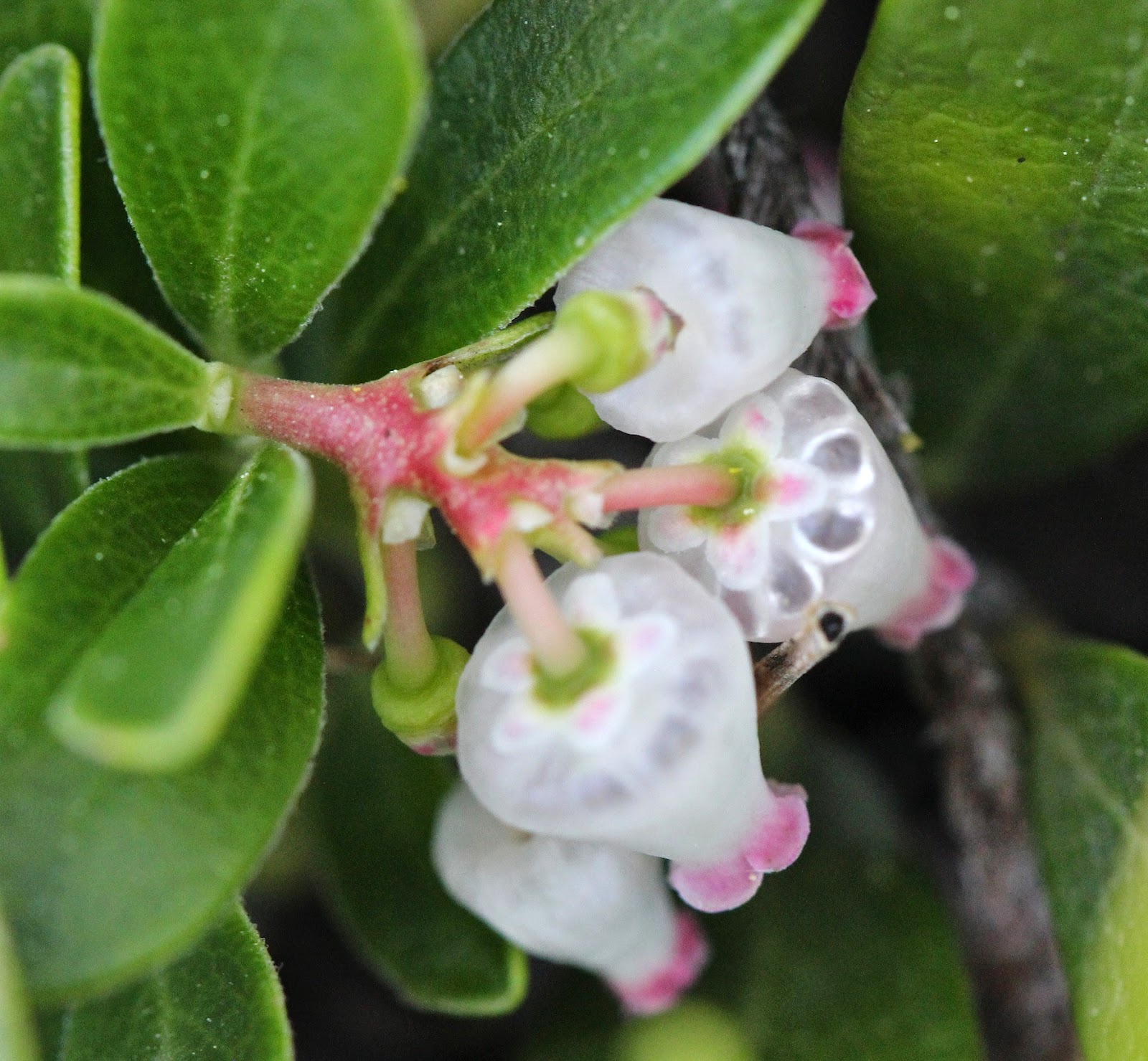 There were many sand lilies among the sagebrush and grass.  These are true spring wildflowers and will soon be gone, taking their leaves with them. 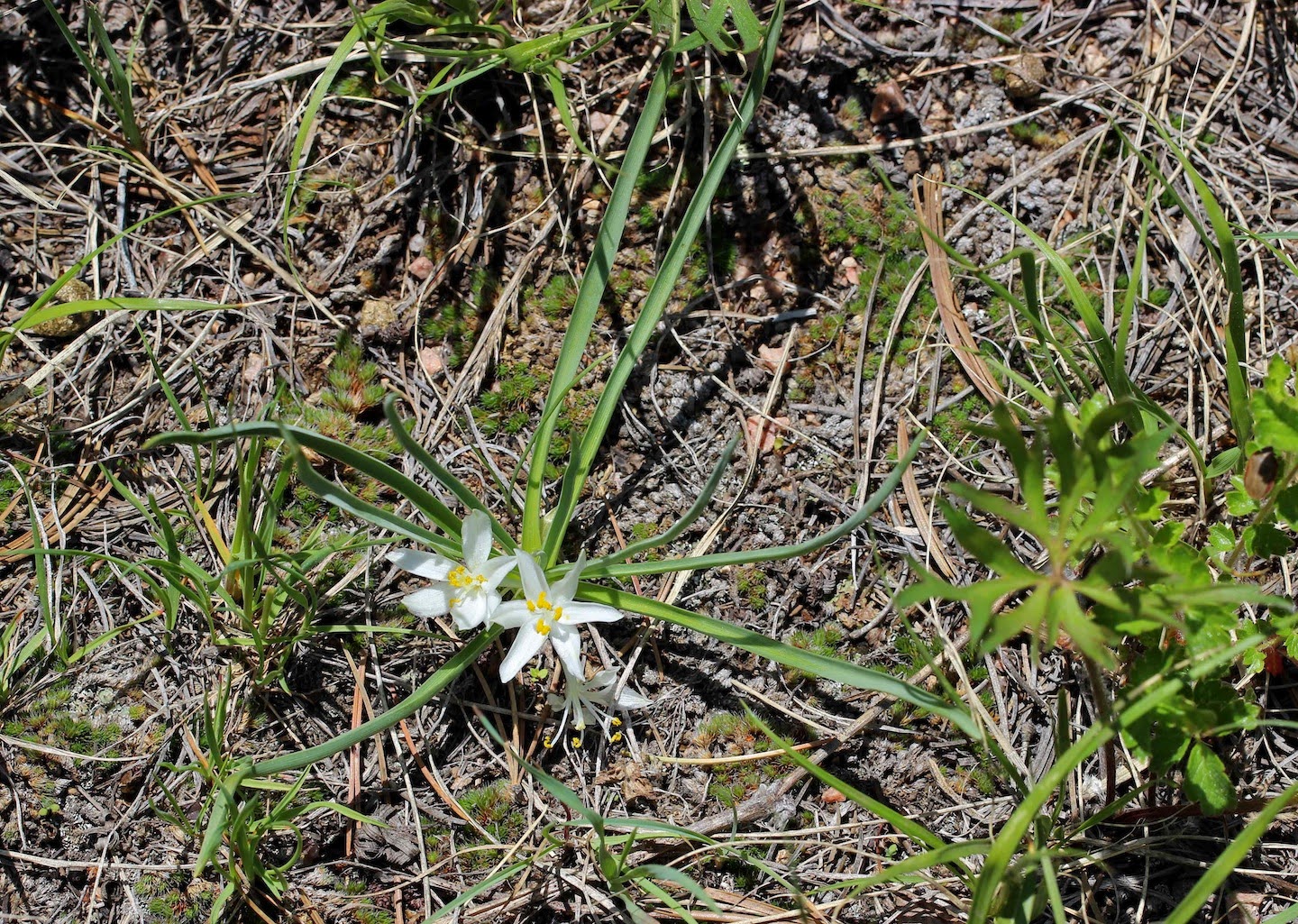 While I was lying face-to-face with a sand lily, I spotted the petite and beautiful blue-eyed Mary nearby.  She’s one of our commonest spring herbs and one of the hardest to photograph.  It took many tries to bring the tiny flowers into focus.
Then I realized I wasn't the only mammal among the plants -- a pika juvenile cottontail rabbit was studying them too!  I stood up slowly and tip-toed away without disturbing him much.  See caption below for more info on id.

I would have kept walking, but a flash of garish pink stopped me -- mountain ball cactus. 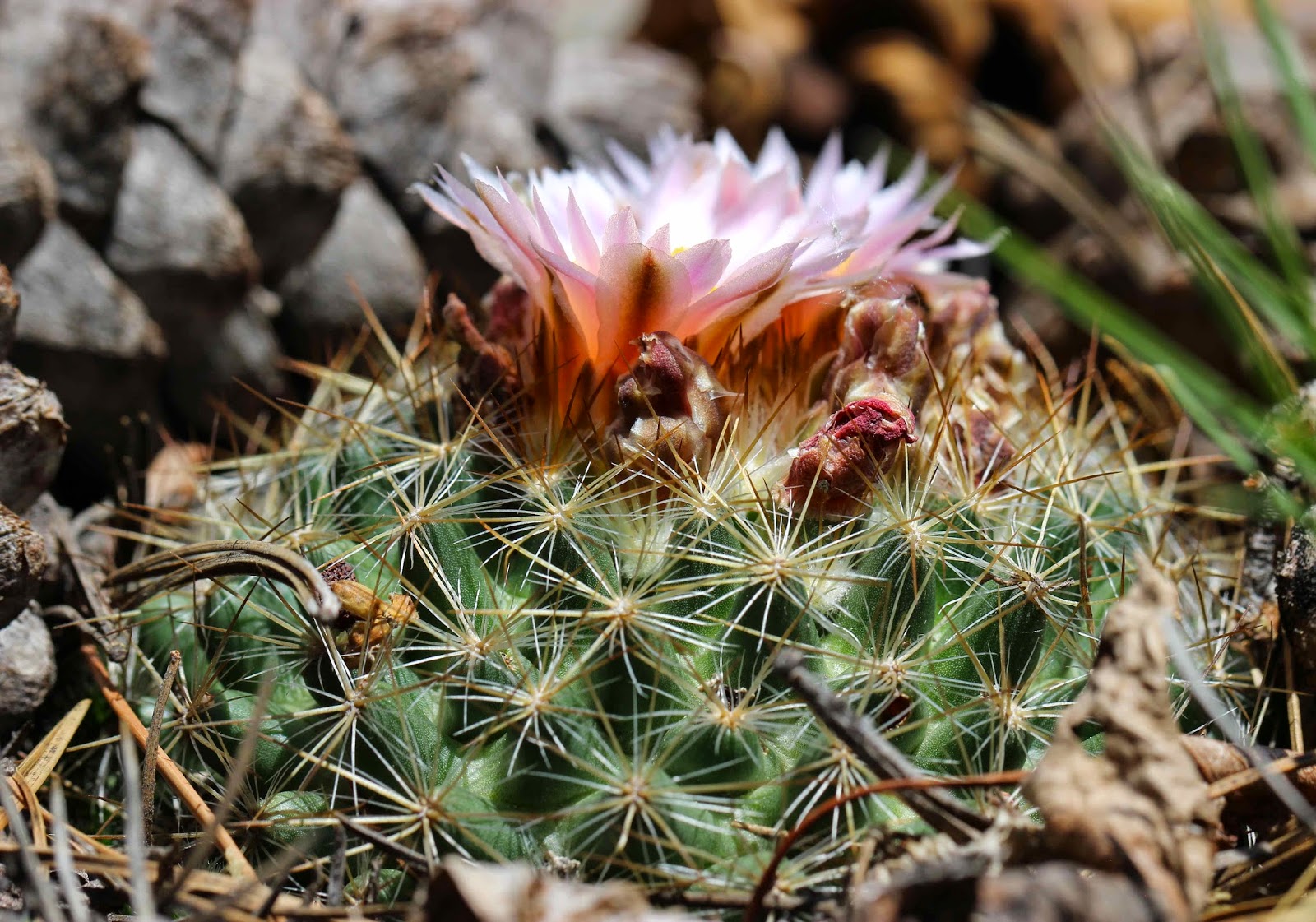 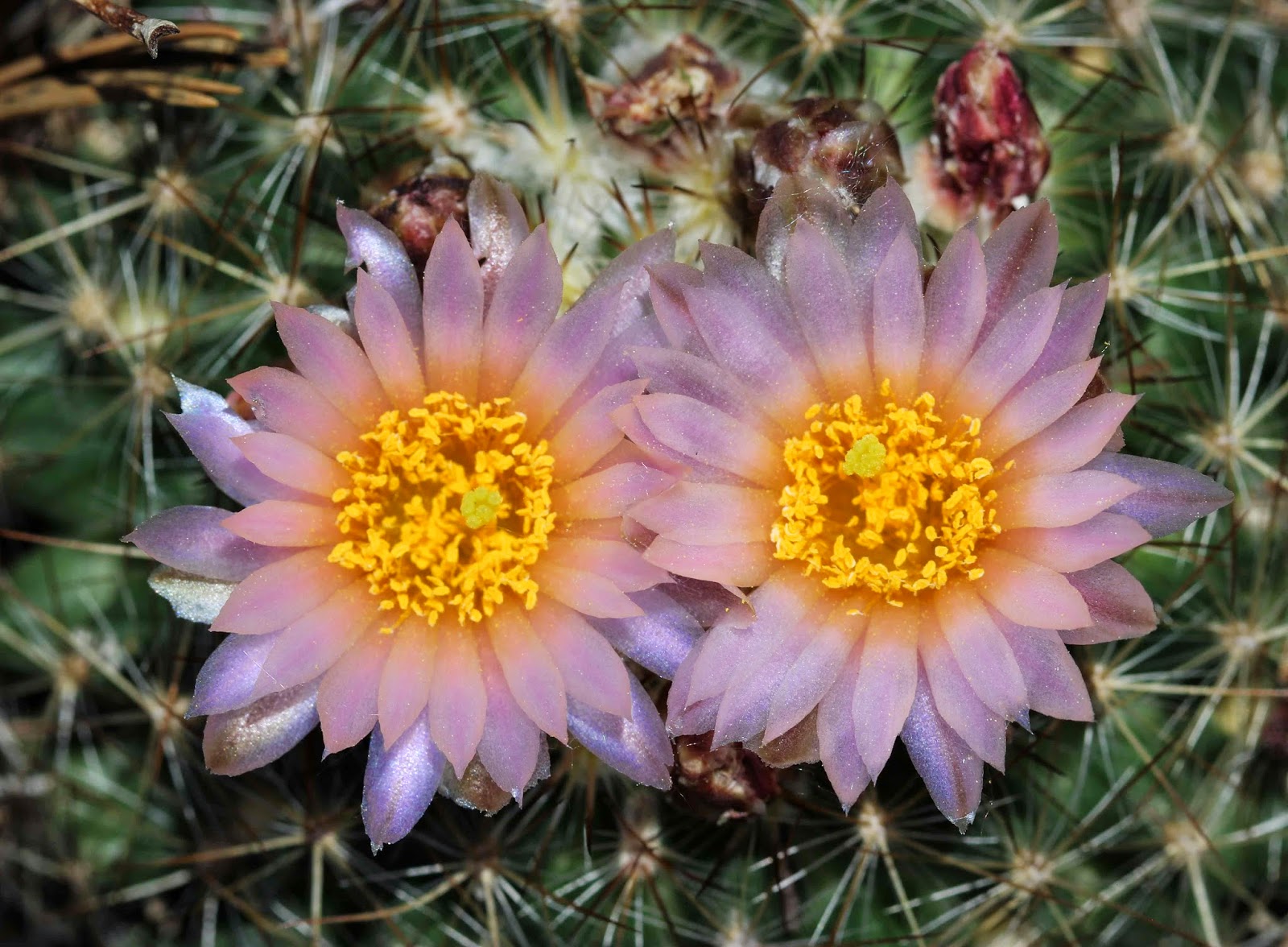 Ball cactus plants appear to be only a few inches tall, but there's an equal portion underground.  They really are ball-shaped.

Back on the trail I came upon the first of many golden peas.  These plants are tall enough that one doesn't have to squirm around on the ground to take photos. 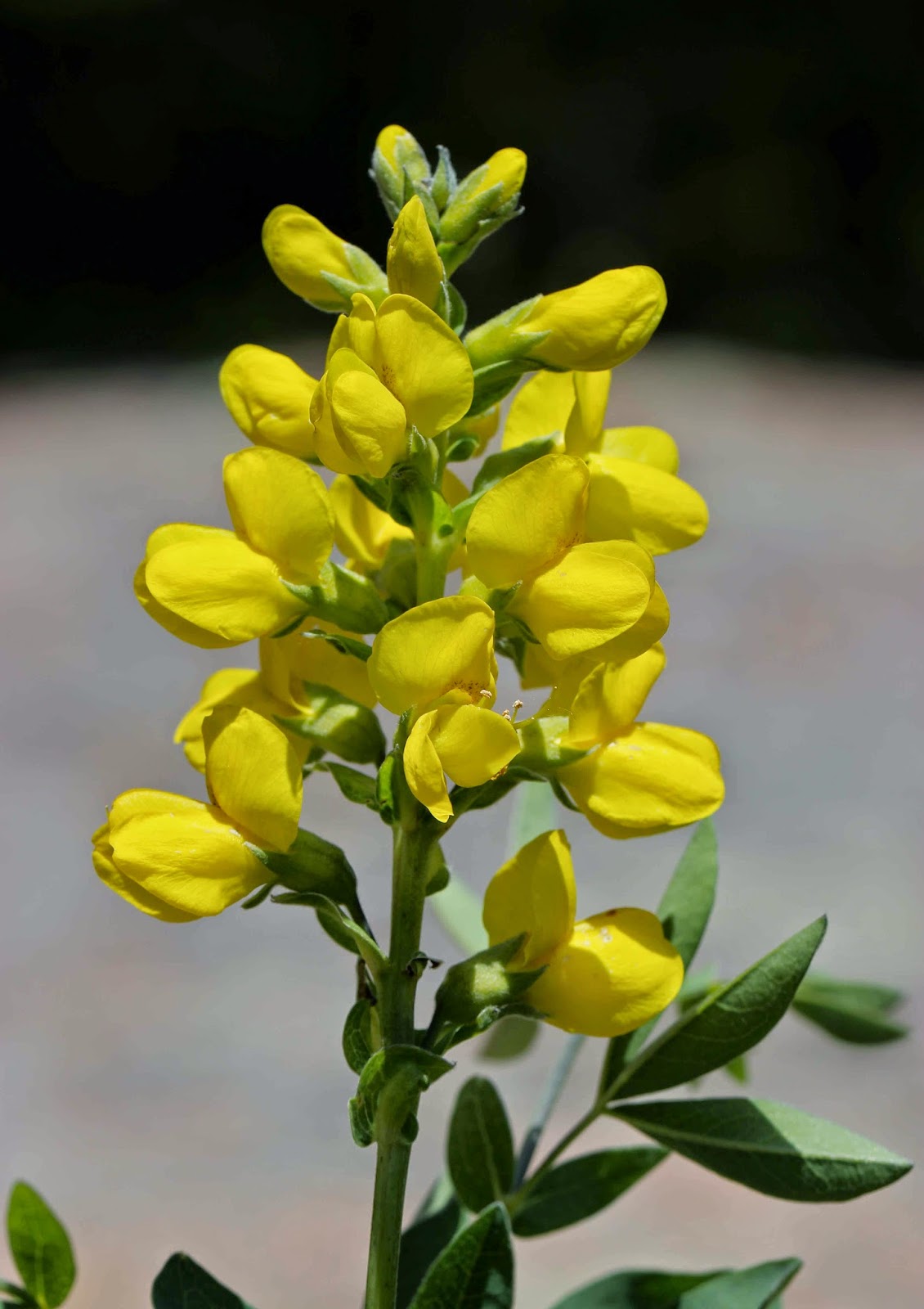 Golden pea is either Thermopsis montana or Thermopsis rhombifolia var. montana depending on your taxonomic inclinations. 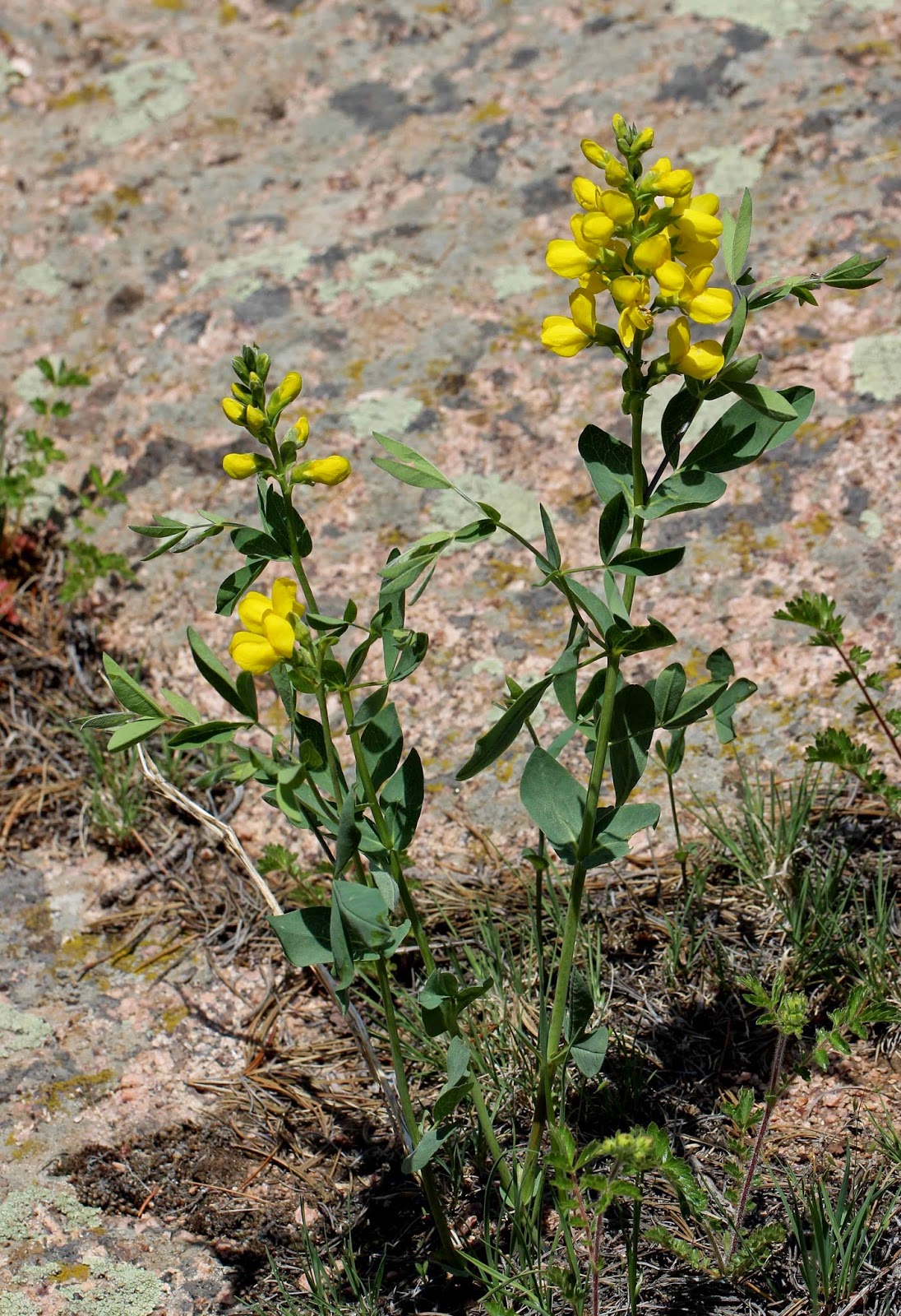 In a sunny area with grass, sagebrush and rocks, a miner’s candle was starting to light up. 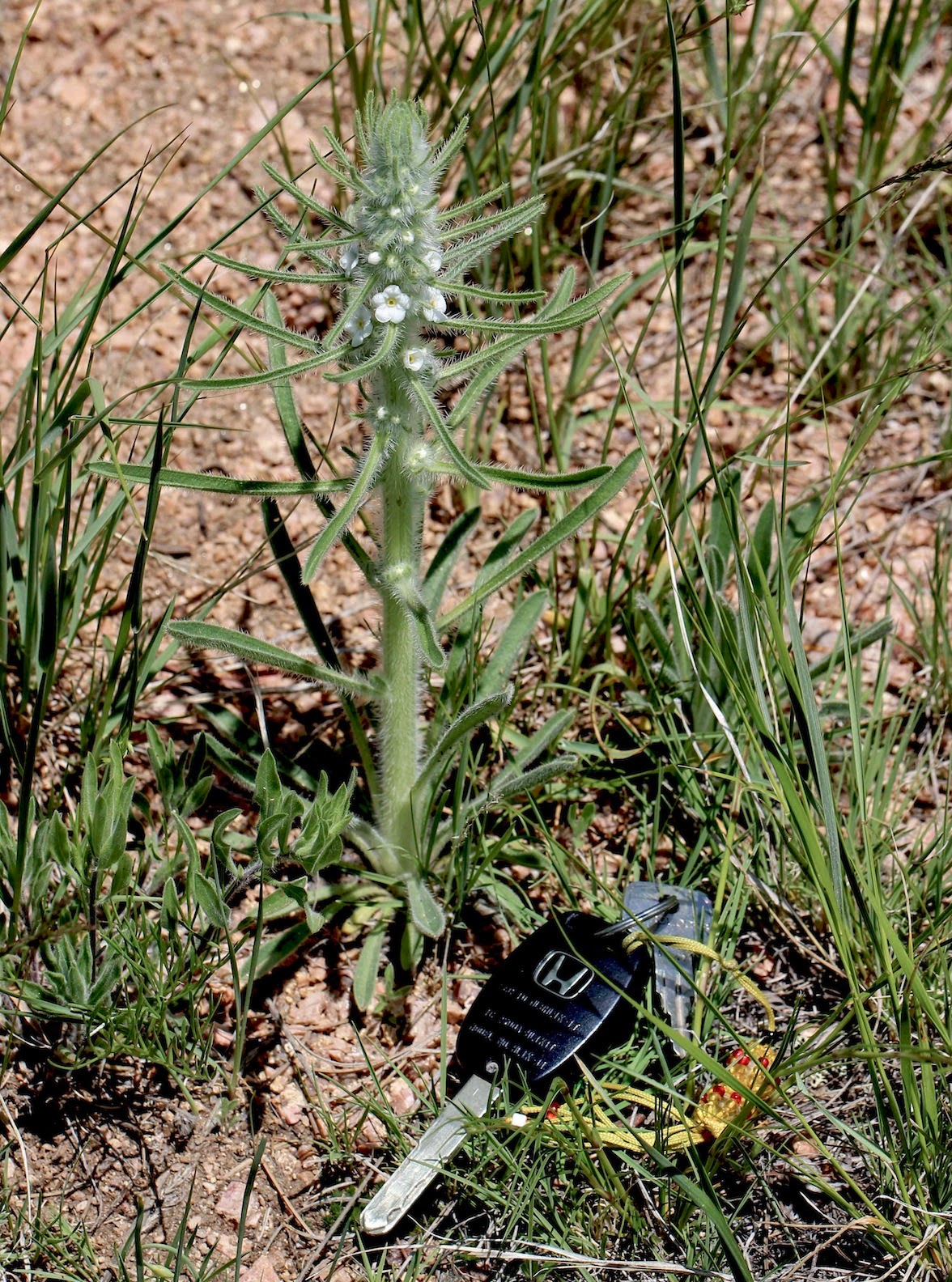 This miner's candle is Cryptantha virgata. The long bracts sticking out from below the flowers are characteristic of the species.  The plant is about seven inches tall right now, and will grow another seven inches at least as the flower cluster elongates. 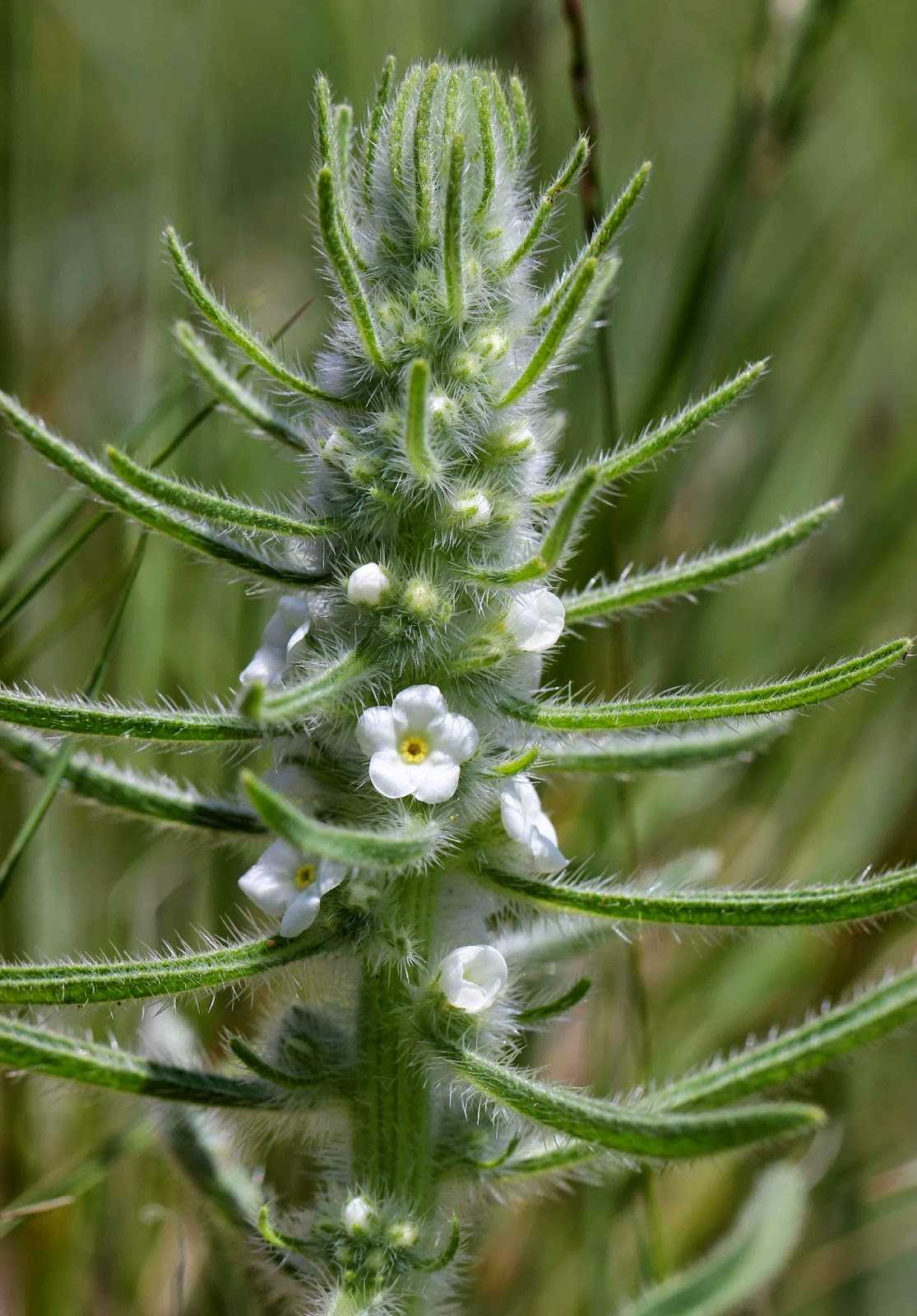 Miner’s candle has very coarse hairs, as do many members of the borage family.  They can be nasty, especially when stuck in skin or hair.  But they’re beautiful up close. 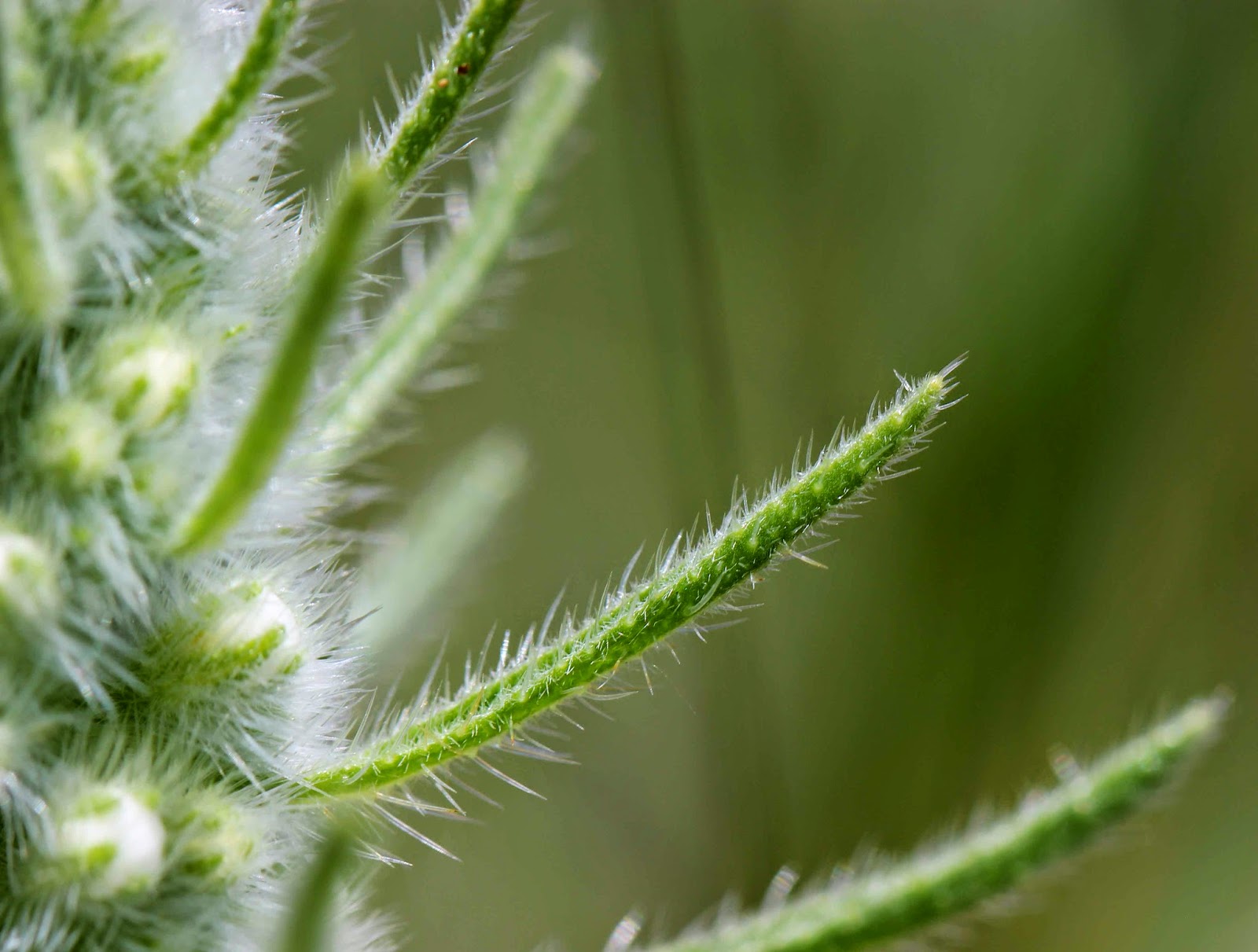 Not far from the miner’s candle, I saw a locoweed I didn’t recognize, with lovely creamy white flowers laced with pink.  I hope to go back when it has pods and is identifiable. Locoweeds (Astragalus and Oxytropis) are in the pea family, so their flowers have the characteristic banner, wings and keel. 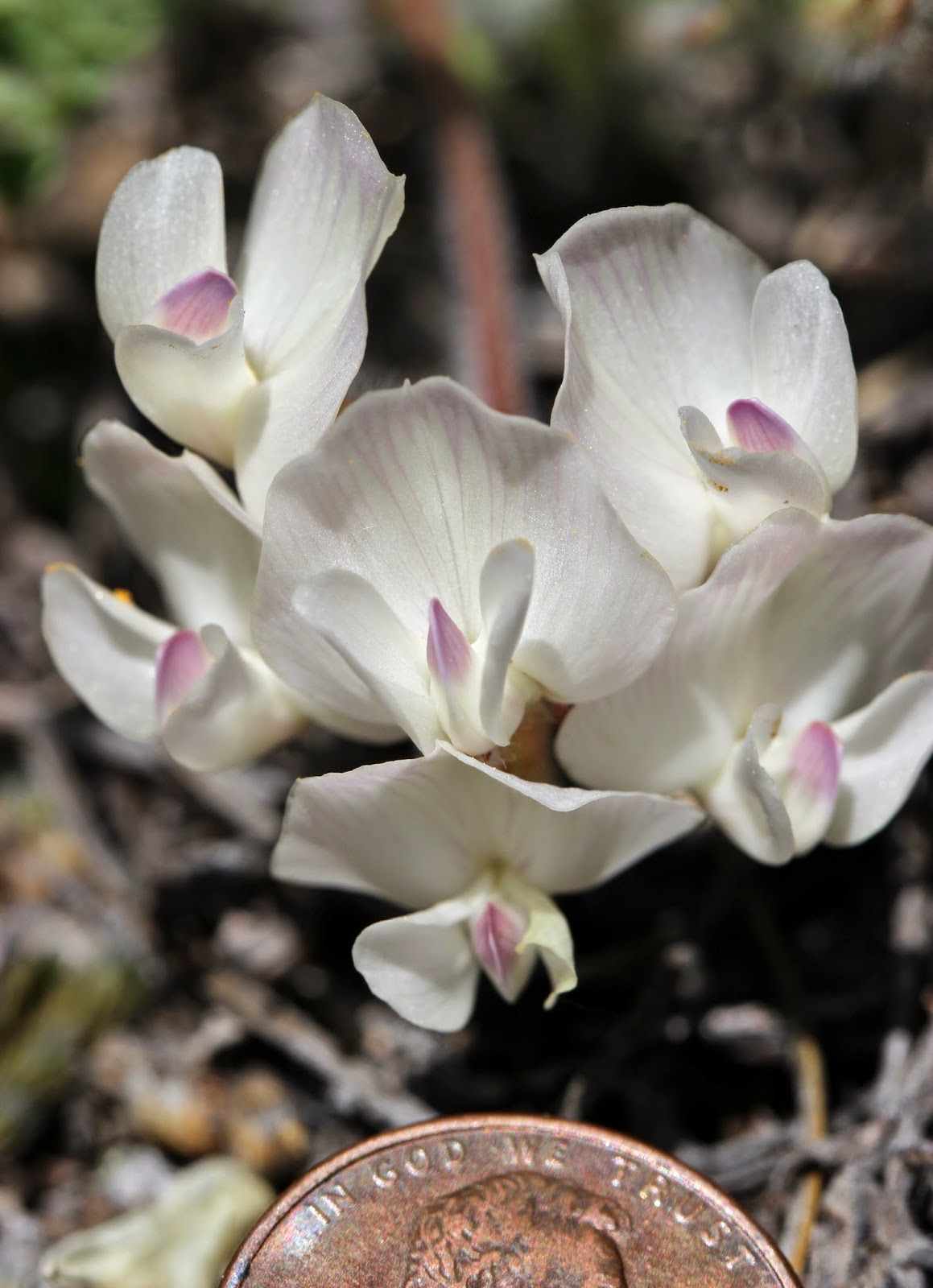 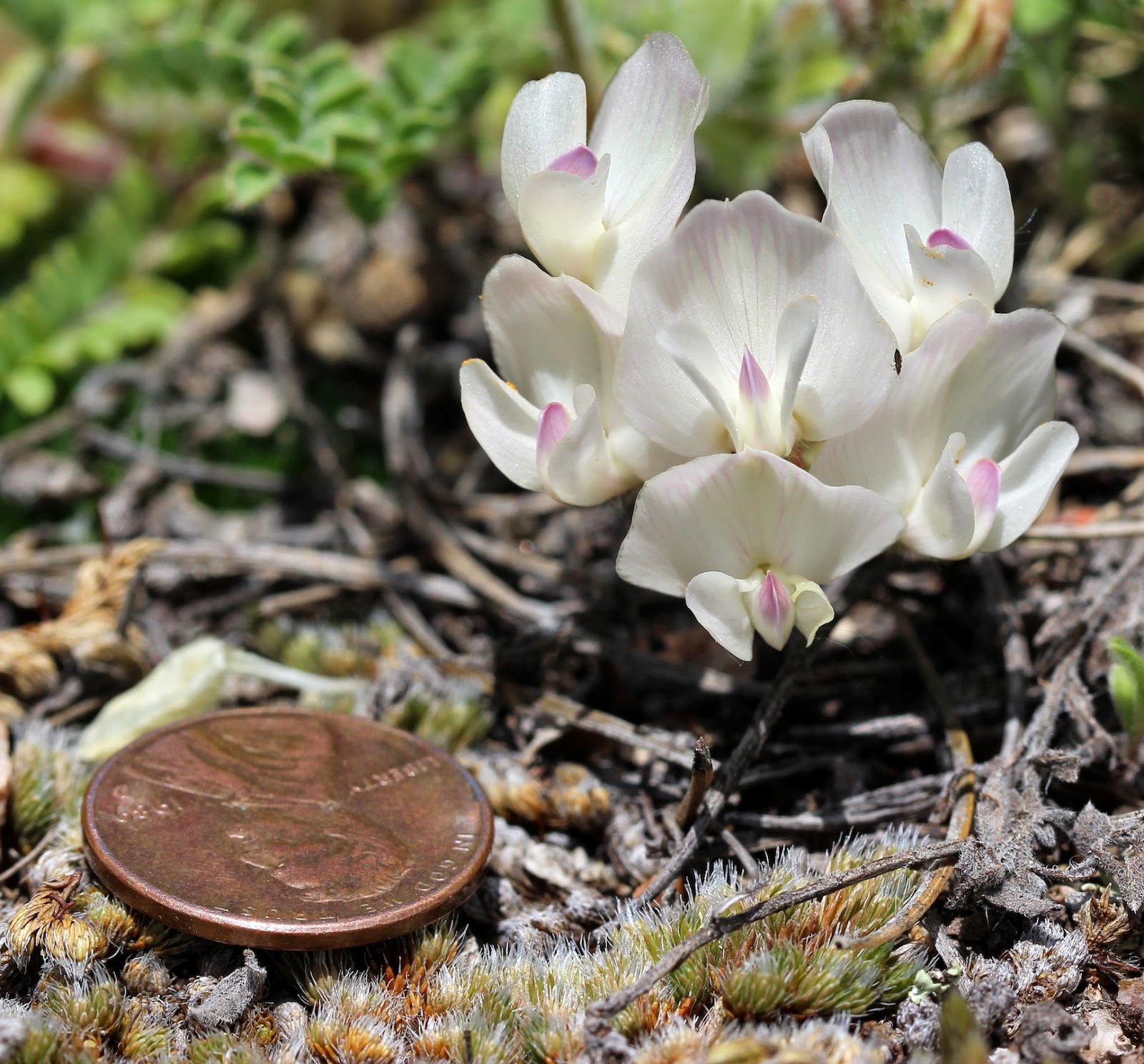 Next to the locoweed was spike moss (above, with penny).  This isn’t really a moss but rather a vascular plant -- like trees, grasses, wildflowers and ferns.  It has no flowers and produces spores instead of seeds.  It's been assigned to one of the plant groups loosely classified as “fern allies”. 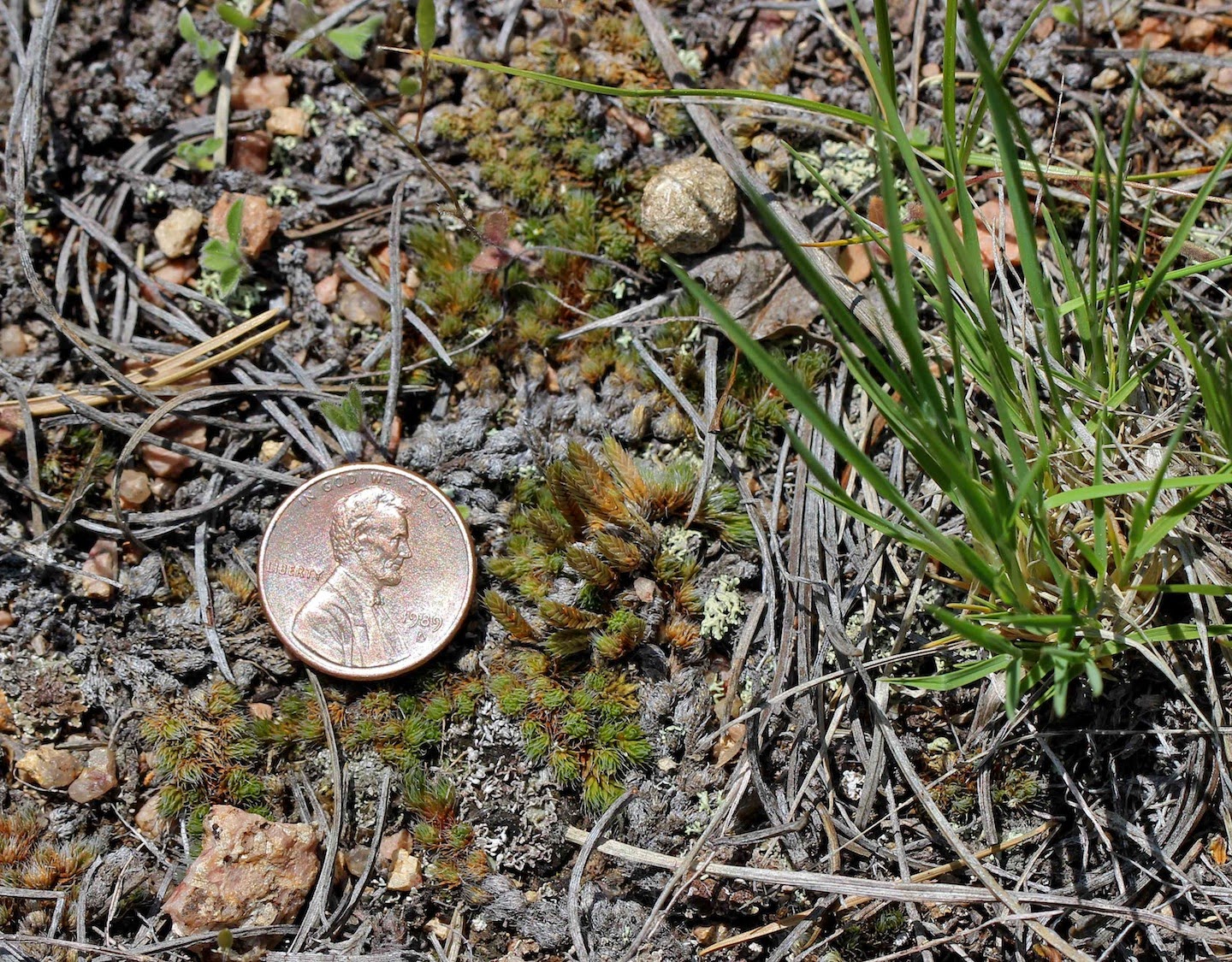 The spike moss (Selaginella densa) was in full “bloom”.  The erect four-sided structures are spore-producing strobili.  The spores are located at the base of each tiny spine-tipped leaf (click on images to see more detail). 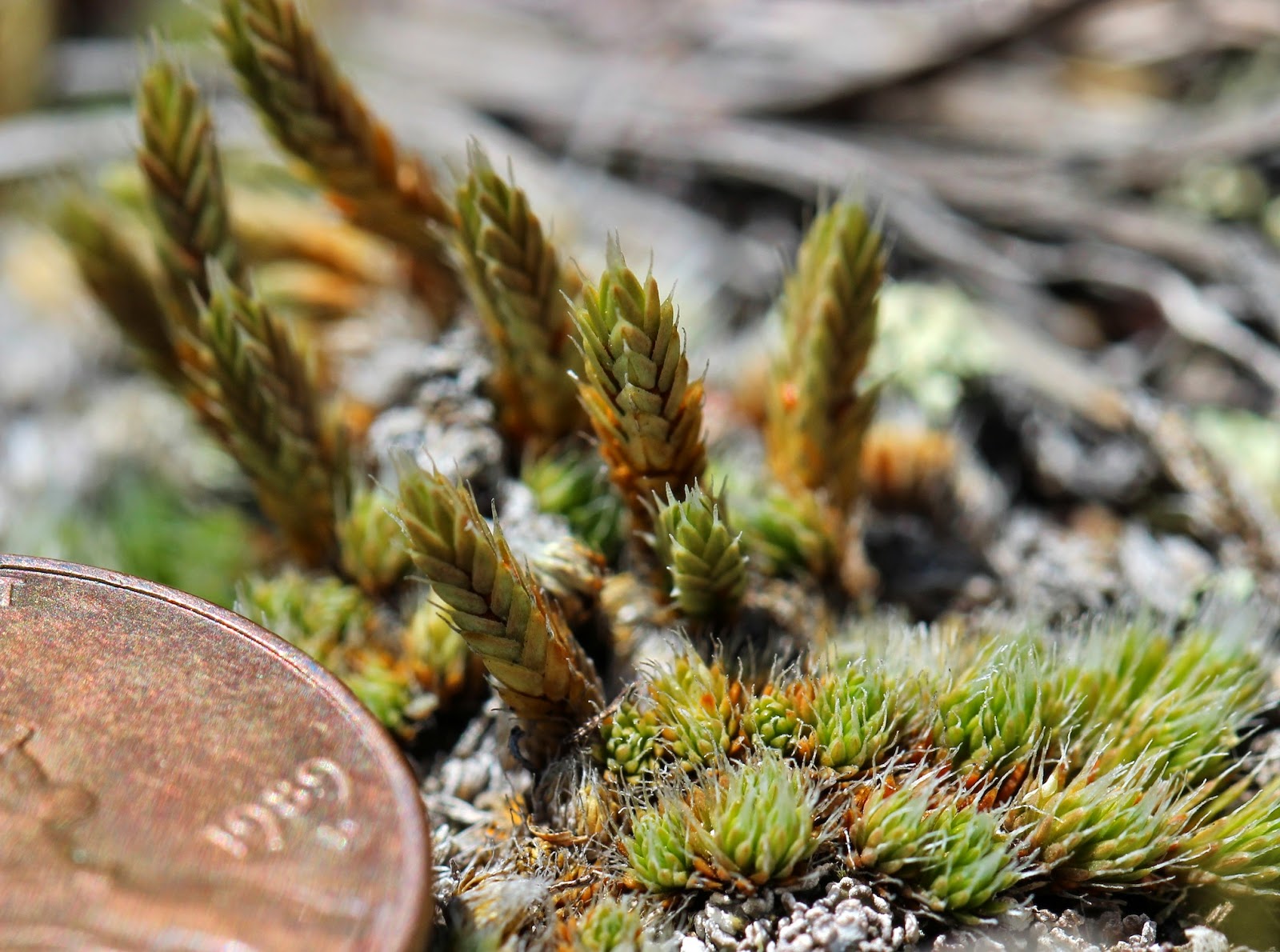 My photo expedition ended in a patch of wild strawberries ... or rather wild strawberry flowers.  This is probably Fragaria virginiana, which has seeds sunken in tiny pits in the surface of the fruit.  In our other wild strawberry, Fragaria vesca, the seeds lie right on the fruit surface.  Leaves can be used for identification, but they're more variable and not always reliable.  In most of the plants I checked, the tooth at the leaf apex was shorter than the adjacent ones, so this is most likely F. virginiana.  I’ve marked the spot, and will be back to verify my identification when the strawberries are ripe. 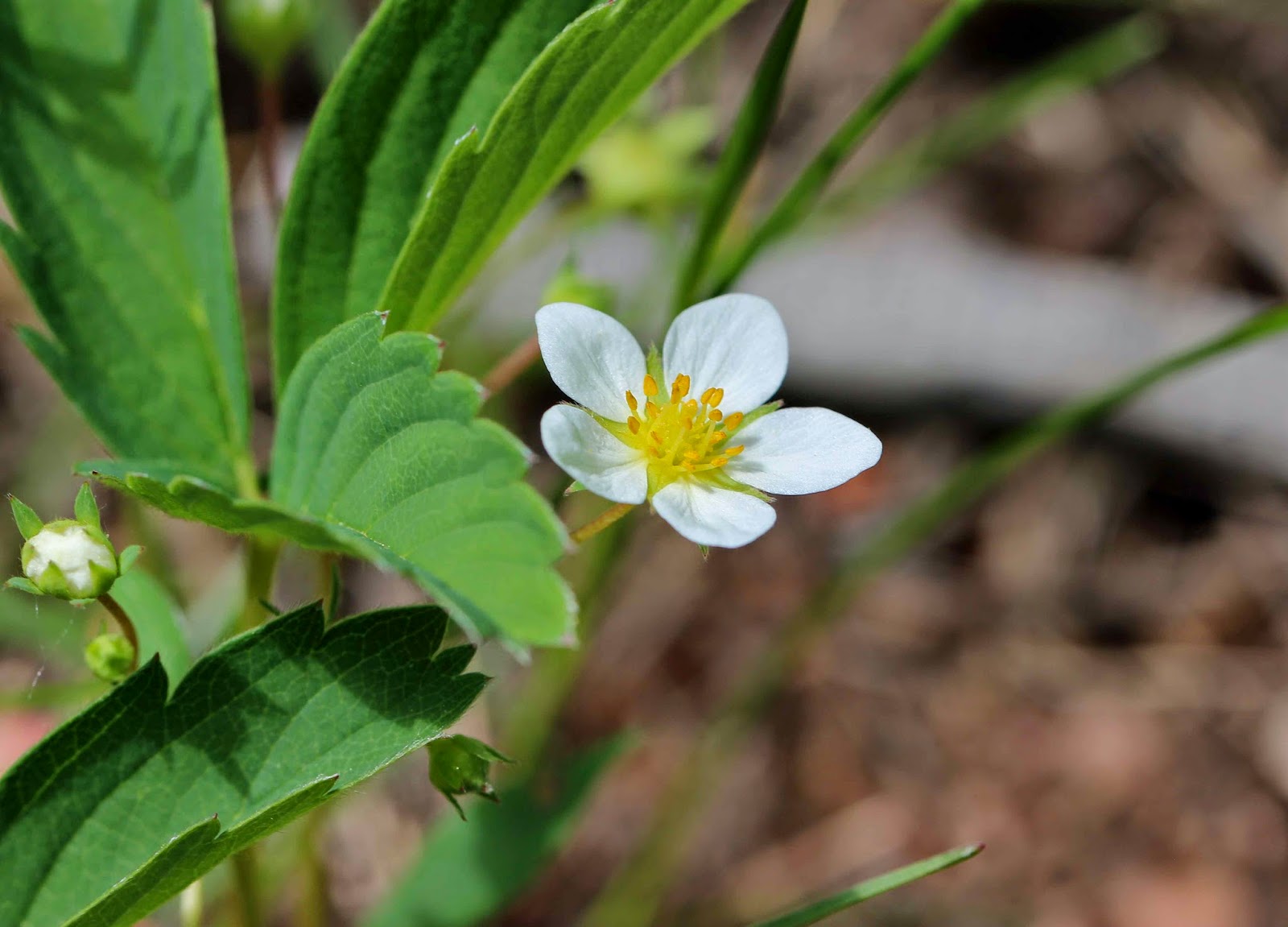 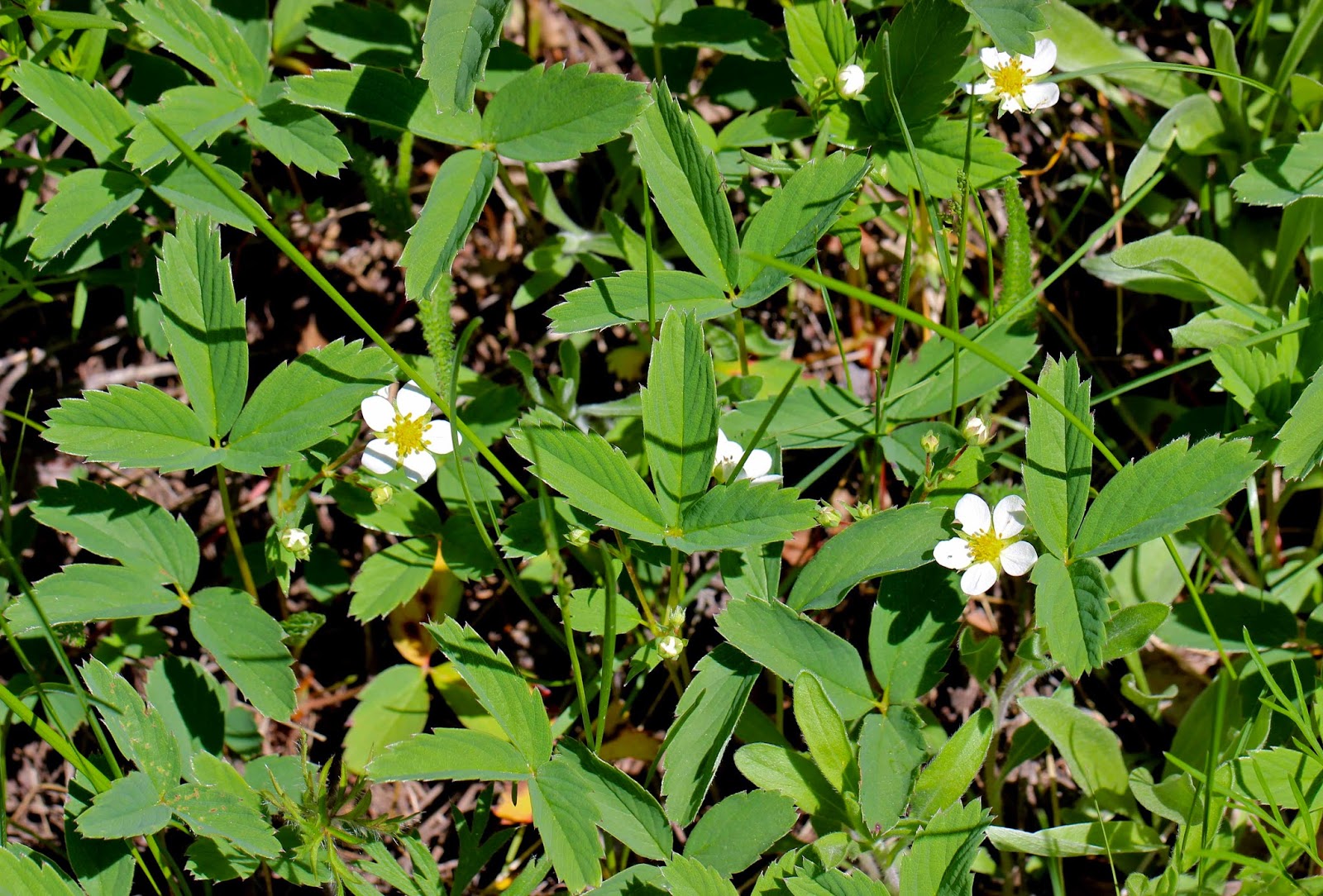