What fruit is this?

In 1544, Matthiolis, in his Italian herbal, wrote the first known account of a small yellow edible fruit from the New World, which he described as a new type of eggplant.  It came to be known as pomi d’oro -- apple of gold.  By 1553, golden apples were being cultivated in Germany, in France soon thereafter, and in England by 1597.  For reasons unknown -- maybe a few changes in pronunciation, or perhaps hope played a role -- pomi d’oro became "poma amoris" (Italian) and "pomme d’amour" (French) -- the Apple of Love.  [Update 12 Nov 12:  both Smith (2000) and Pat the Plant (see Comments below) mention that "poma amoris" may have come from "pomo dei mori"(apple of the Moors), which may have included tomatoes.]

Not surprisingly, the efficacy of love apples was of great interest.  By the mid-17th century, they were being advertised as having “amatory powers”, in part because they were considered so elegant in form.  Unfortunately, experience provided little support for theory. But ardent hope doesn't die easily, and love apples still are promoted as aphrodisiacs to this day, as a quick web search reveals. 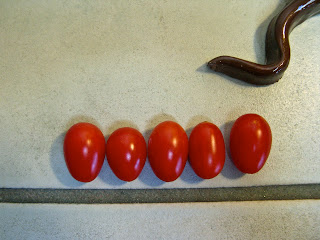 People continued to use both “golden” and “love” for these moist fleshy little apples, but golden eventually lost out to love, perhaps because red varieties were becoming more common.  In the meantime, another name had come into use in France, Spain and Portugal -- “tomate”, probably derived from "tomatl" (Nahuatl) or "xitomatl" (Aztec).  The golden apples that early Spanish explorers had brought home to the Old World were from Central America, were they were cultivated by Nahuas, Aztecs and other Mesoamerican groups.

The love apple had pretty much turned into a tomato by the time it returned to the New World with English colonists in the early 1700s.  But references to love apples continued into the 20th century.

It's likely that the tomato originated in South America, where its closest wild relatives still grow. These are the currant tomatoes (Solanum pimpinellifolium) -- much smaller, less fleshy and not as sweet as tomatoes.  (Note: true currant tomatoes hybridize easily with the domestic tomato; many varieties advertised as currant tomatoes actually are crosses.)  Interestingly, some early writers called tomatoes “apples of Peru”.  Others argue for Central American origins, because the larger fleshy tomatoes we find so tasty were domesticated and developed by Mesoamericans.  However, no wild relatives are known there.
The first to formally describe the tomato was the great biologist Carl Linnaeus, the man behind modern taxonomy.  In 1753, he named it Solanum lycopersicum, thereby declaring its close relationship to the potato, Solanum tuberosum.  The tomato was moved to its own genus shortly thereafter, becoming Lycopersicon esculentum.  Though the new name was widely accepted, it broke the rules of botanical nomenclature.  The tomato was renamed Lycopersicon lycopersicum in 1881, but the older appellation remained the more popular.  With recent chloroplast and nuclear DNA analyses, the tomato has ended up back where it started, as Solanum lycopersicum, though all three names remain in use.

“Lycopersicum” means “wolf peach”, and probably was selected by Linnaeus from the classical literature.  Lycopersicon was a plant described by the Roman physician Galen as being both delicious and dangerous -- appropriate for the tomato during Linnaeus’s time (see discussion below).  No one has figured out what Galen’s lycopersicon actually was, and there’s no reason to think it was the tomato of the Americas, given that he lived in Europe during the second century AD.  ("Wolf peach" is sometimes attributed to German were-wolf legends, for example here).  [Update 12 Nov 12:  Pat the Plant provides some interesting additional information on Galen's plant, which I did not come across in my readings, including a probable candidate, a henbane -- a member of the nightshade family, like the tomato.  See Comments below.]
When the tomato was first introduced to Europe, it was slow to gain acceptance, even though described early on as edible.  Unfortunately, in his 1544 description of the golden apple, Matthiolus pointed out that it was a close relative of the mandrake, known to have magical powers (it’s hallucinogenic).  Like its relative, the eggplant, the tomato grew on a vine twining on the ground, considered symptomatic of evil, and the plants themselves were malodorous.  Furthermore, based on the humoral system of medicine then in use, John Gerard of London declared that tomatoes were “very colde, perhaps in the highest degree of coldeness” in his influential Herball of 1597, probably because they were watery. People in the hot countries of southern Europe could eat tomatoes safely, but those of the north were to avoid them, especially in winter.

Public perception had changed significantly by the 18th century, and tomatoes were being widely consumed, possibly because famines had forced people to do so.  In the 19th century, there was a huge upswing in the tomato’s popularity in the United States.  In 1834, Dr. John Cook Bennett, a physician in Ohio, declared that tomatoes cured many ills, including diarrhea, violent bilious attacks, and dyspepsia.  Several years later, he met Archibald Miles, a traveling salesman, and the two conspired to produce Dr. Mile’s Extract of Tomato Pills.  The list of treatable ailments was expanded to include jaundice, rheumatism, coughs and headaches.  Tomato pills and tomato products soon were in high demand, and by 1838 enough competitors had entered the market that a Tomato Pill War was raging.  Sometime around 1840, the medical profession got into the act.  They found little evidence for the claims of Bennett and Miles, and eventually tomato pills fell from fashion.  But the two hucksters had done tomatoes (and all of us) a great favor by making them and their products, such as soup and ketchup, widely popular. 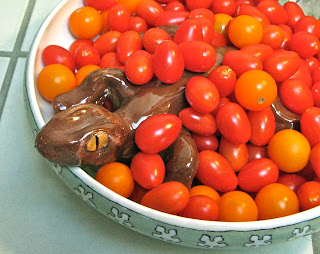 Shortly after the Civil War (USA), the tomato was threatened with a return to disrepute when Dr. Dio Lewis, a physician at the Harvard Medical School, declared it to be cancer-causing.  His mother had told him not to handle tomatoes, and throughout his life he had found plenty of evidence that she was right.  During his lectures, he supplied witness after witness testifying that it was tomatoes that caused their painful stomach conditions, bleeding gums, piles and many other afflictions.  But Lewis was having little impact on the tomato's popularity ... until he pulled the ace out of his sleeve, announcing that tomatoes caused cancer.  He was joined by Dr. John Hylton, who explained that tomato cells and cancer cells were identical under the microscope.  There was an uproar.  Would people have to give up their now-beloved tomatoes?  Again, the medical community came to the rescue.  Through surveys and public statements, respected doctors made convincing arguments in support of the tomato, much to everyone's relief.  (However, a web search will show that the cancer-causing myth didn't disappear entirely.)

Ironically, there is evidence that Dio Lewis’s cancer-causing tomato may bestow some cancer protection via the antioxidant lycopene, found in high concentrations in tomatoes and tomato products.  There may be some correlation also with lowered stroke risk ... maybe.  See the recent discussion in Finnish diet? No thanks!: Diet and health at The Mermaid’s Tale. 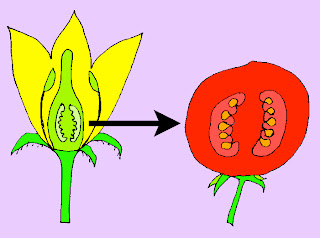 Golden apple, love apple, wolf peach and even tomatl (swelling fruit) all suggest that the tomato is a fruit.  Technically, it is a fruit.  Botanically-speaking, a fruit is the ripened ovary of a flower, containing the seeds.  Watch one of your garden tomato flowers through the season.  Sure enough, the little ovary matures to become a big plump juicy fruit, with two chambers full of seeds.

However, many people, perhaps most people, consider the tomato a vegetable and legally it is, decided by the US Supreme Court in 1893.  Edward L. Hedden, Collector for the port of New York, had charged John, John W., George W. and Frank W. Nix a duty of 10% ad valorem on tomatoes imported from the West Indies, in accordance with the Tariff Act of 1883.  Hedden said the Nix tomatoes were “vegetables in their natural state, or in salt or brine, not specially enumerated or provided for in this act”.  The Nix family disagreed, claiming that tomatoes were “Fruits, green, ripe, or dried, not specially enumerated or provided for in this act”, and they wanted their money back.  Even though "fruit" was defined as plant structures containing seeds, the justices ruled that common usage trumped technical definition.  They declared tomatoes to be vegetables because they are provisions “which are grown in kitchen gardens, and which, whether eaten cooked or raw, are, like potatoes, carrots, parsnips, turnips, beets, cauliflower, cabbage, celery, and lettuce, usually served at dinner in, with, or after the soup, fish, or meats which constitute the principal part of the repast, and not, like fruits generally, as dessert.”

When the Jersey tomato was nominated for State Vegetable of New Jersey, the opposition (mainly sweet corn fans) pointed out that technically the tomato is a fruit.  Then a fourth grade class discovered in their government studies that the tomato had been declared a vegetable by the highest court in the land, and the tide turned in its favor.  As Senator Ellen Karcher explained, “botanically, it's a fruit; legally, it's a vegetable”.  See the New Yorker for an entertaining account of the battle.  Left, Express-Times Photo | BRUCE WINTER, from an article about the school kids' campaign.


In 1987, the Arkansas General Assembly wisely adopted the tomato, specifically the South Arkansas Vine Ripe Pink Tomato, as both State Vegetable and State Fruit.  It is celebrated each year at the Bradley County Pink Tomato Festival. 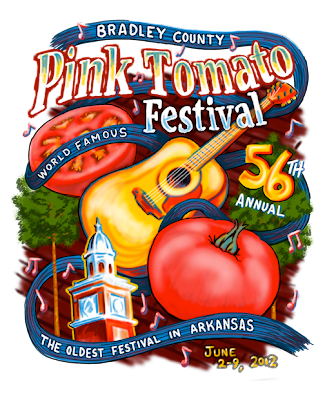 And then there's the question of pronunciation ... 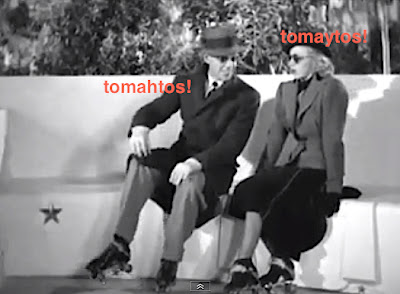 In 1937, Fred Astaire famously sang to Ginger Rogers “you like to-may-toes, I like to-mah-toes" in Let’s Call the Whole Thing Off by George and Ira Gershwin (video here).  But Ginger was right, and ahead of her time.  Today, Americans are much more likely to say tomayto, saving the broad “ah” for caricatures of the upper class. 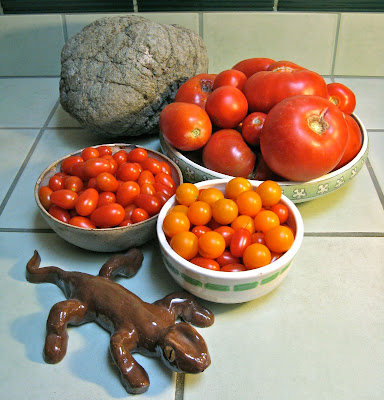 When I die don't bury me
In a box in a cemetery
Out in the garden would be much better
I could be pushin' up homegrown tomatoes!