Dwarf Lousewort & the Joy of Learning 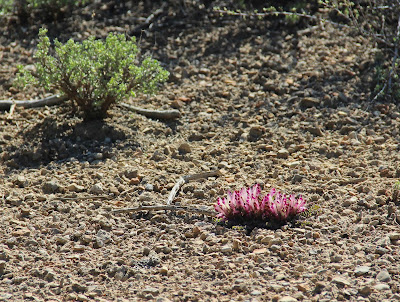 On a cool bright May morning in the Egan Range of eastern Nevada, I was stopped in my tracks, stunned by what I saw. Glowing in the sunshine was a cluster of flowers that defied expectations. My brain struggled with conflicting input; there was even a moment of anguish. But as soon as I checked the plant guide, I experienced that combination of strange and familiar that brings surprise and then joy. Here growing with sagebrush and very little else, in an opening in dry pinyon-juniper woodland, were louseworts!—specifically Dwarf Louseworts, Pedicularis centranthera. (Broomrape Family, Orobanchaceae).

This was a surprise. I thought louseworts were plants of wet meadows, shady montane forests, and the subalpine zone. Furthermore, these plants had no long clusters of flowers standing well above the basal leaves. The flowering stems were so short that the flowers were nestled among the leaves. But they were typical lousewort flowers—petals united into a tube that was two-lipped at the opening, lower lip three-lobed, upper lip hood-like (called a galea, meaning shaped like a helmet).

In addition to the Bracted Lousewort above, the following are those I'm most familiar with, all common in the mountains of southeast Wyoming:
But now, thanks to that joyful encounter with the Dwarf Lousewort, my concept of Pedicularis has been expanded to include pinyon-juniper habitat. In fact, this lousewort is common enough in pinyon-juniper woodland in the western United States that it’s often called Pinyon-Juniper Lousewort.
But why “lousewort”? Because back when the genus was first described, by Carl Linneaus, it was thought that when cattle and sheep ate these plants, they became infested with lice. Wrong! But Linnaeus was the great namer, having invented 266 years ago the system of scientific names that we still use today, so we’re stuck with Pedicularis—from Pediculus, Latin for louse. As for the common name, though Pedicularis is sometimes called Wood Betony, Lousewort is far more common, at least in the western US (“wort” comes from the Old English “wyrt” meaning plant).