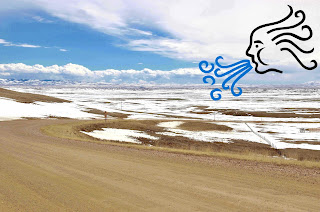 This summer, Plants and Rocks has been preoccupied with a short series of articles for our local paper, the Laramie Boomerang, about Earth Science. Say what?! But why not?! Geology is rich with great stories that can be understood and enjoyed by the general public. I’ve done articles in the past, and it has always been a pleasure. The staff are so appreciative (probably helps that I write pro bono), and I get plenty of satisfying feedback from readers, in large part because they like to learn new things about their home territory.

Here’s the first in the series, reformatted only slightly for Blogger. A longer version appeared recently as a blog post. Note the inclusion of historical material. It's a requirement, as these articles appear in the "Laramie's Living History" column. But that's fine by me. I enjoy "listening" to the spirits of old timers!

Big Hollow, an Exceptional Hole in the Ground

In the Laramie Basin just west of Laramie lies an exceptional hole in the ground—the Big Hollow. It is indeed big: nine miles long, four miles wide, and almost 200 feet deep in places. In 1980 it was designated a National Natural Landmark, not just for its size but also for its origins. The Big Hollow was dug by wind!

This is the largest deflation hollow in North America, but huge as it is, it’s easy to miss. While a mountain range stands above its surroundings and can be readily admired, a hollow lies below and is easily overlooked. But it doesn’t have to be that way. Wyoming Highway 130 traverses the north rim, and if you drive west from the airport for about seven miles, looking south from the road, you will soon grasp the immensity of the Big Hollow, even at 70 mph.

BUT TEN BILLION TONS?!
Do you find it hard to believe that wind carved such a big hole? Early geologists did too. In 1909, Eliot Blackwelder reported that “wind has been an agent of great importance” in the Laramie Basin, and went on to describe the Big Hollow’s impressive dimensions. Yet he was cautious in his assessment: “The region has not been glaciated, but its surface has been modified in detail and perhaps in gross by wind carving” (italics added).

Even Nelson Horatio Darton—the great Rocky Mountain field geologist—struggled to understand the Big Hollow. In his report that accompanied the 1910 geologic map of the Laramie area, Darton puzzled over the many hollows in the basin, especially the largest: “The precise conditions of their development are difficult to understand, as a vast volume of clay and sand has been removed from them; the amount removed from Big Hollow was more than 10,000,000,000 tons.”

Geologists now agree that wind excavated the Big Hollow, specifically during the last Ice Age (the late Pleistocene), resulting in topographic reversal. In fact, the National Natural Landmark description notes that the Big Hollow is a classic example of this process.

COLD NOW? THIS IS NOTHING!
To understand topographic reversal, we’ll visit the north rim (today’s WY 130) during the late Pleistocene Ice Age, tens of thousands of years ago. Bring an extra warm jacket and a snug fitting hat! For even though we’re 500 miles south of the continental ice sheet, the impact is significant. The Medicine Bow Mountains to the west lie under an ice cap, with only the high Snowy Range visible. Icy meltwater streams rush down and out into the basin, where they slow and drop loads of eroded debris, spreading gravel and rocks across the land.

The Laramie Basin itself is a scene out of the arctic. It’s covered in permafrost—soil that's frozen year-round. The immediate surface thaws during warmer months, but the season is too short and dry for much to grow. Into this harsh barren world, a frigid west wind roars down from the Medicine Bow Mountains.

The biggest surprise is the landscape where we stand—it’s turned on its head! We’re not on a rim. Instead, we’re in a drainage bottom, on a floodplain covered in rocks and gravel carried down from the mountains. And look south. There's no Big Hollow. Instead, the side of the drainage leads up to a ridge or hilltop.

As we travel the thousands of years back to the present, we’ll take some time so that we can watch topographic reversal in action. We see that the wind easily erodes the sparsely-vegetated ridge or hill, bit by bit, year after year. But the drainage bottom is protected from erosion by rocks and gravel that are too heavy to be carried off by wind. As the Hollow is excavated by wind, the old lowland (drainage bottom) eventually is left standing relatively high, as today’s rim. Voilà—topographic reversal!

TOUR BIG HOLLOW
Now that we’re back in the present, let’s do a real tour of the Big Hollow. We’ll make a clockwise loop via WY Highway 230 to the Big Hollow Road (well-maintained gravel) to WY Highway 130, and then back to Laramie. Total distance is 32 miles. The tour can be done in winter but check road conditions first. Most property along the route is privately-owned; exceptions include several public lakes (turnoffs signed) and a stop on the north rim (details below). There are primitive restrooms at Twin Buttes Lake, about halfway through the tour.
Start at the junction of WY Highways 130 and 230 in West Laramie. Take WY 230 about eight miles to Pahlow Lane (County Road 422), and turn right. After 5.5 miles on Pahlow Lane, turn right on County Road 44, the Big Hollow Road (or first make a rest stop at Twin Buttes Lake).

After about two miles on the Big Hollow Road, you will cross the subtle south rim and drop into the west end of the Hollow, with good views of the prominent north rim ahead. Pass the small Big Hollow oil field off to the right. The road soon winds up to the north rim. Near the top, you can examine small road cuts that reveal the rim’s cap of gravel and rocks.

At the junction with WY 130, turn right toward Laramie. But before you continue, read your odometer carefully or set it to zero. The Hollow will be visible occasionally from the road, but there is only one pullout with good views, and it’s less than obvious. Drive about 6.3 miles to a small pullout on the right on State land (not signed). Note the unlocked gate and sign: “Please Keep Gate Closed”. If you don’t see these things, you’re in the wrong place.

Here you can stroll a short distance along the rim, and—with the right mindset—travel back in time to ponder topographic reversal. Just think! You’re standing not on a rim but on an Ice Age floodplain, the drainage bottom of a former tributary to the Laramie River. The gravel and rocks it carried down from the Medicine Bow Mountains are still visible beneath your feet. This is the protective armor that minimized erosion while the wind excavated the Big Hollow to the south.

Back on the highway, turn right and continue toward Laramie. The east end of the Big Hollow is visible on the right, shortly before the airport. A few more miles takes you back to the junction with WY 230 and the end of the tour.

BIG HOLLOW MEMORIES
Before ending this article, I want to thank the man who introduced me to the Big Hollow—the late Dr. Brainerd “Nip” Mears, Jr., Professor of Geology at the University of Wyoming. It was a memorable day in early October—35 years ago if I remember right. At the west end of the Hollow, six students huddled together taking notes as best we could as a frigid west wind roared and pelted us with snow—while Doc Mears lectured in his distinctive baritone: “Recent calculations show that the average annual air temperature would have to drop by only 5º C (8º F) for glacial conditions to return to the Laramie Basin.” We didn’t doubt it!